The average rent for a one bedroom apartment in Toronto is now $2,240 but it's expected to go down

Toronto's housing market has surpassed notoriously pricey cities like London and San Francisco lately, and even those with no plans to ever try and buy property are feeling the pressures of living in such an expensive locale.

With rents in Toronto hitting an all-time high of $2,500 on average in recent months — and more than $2,300 for a one-bedroom specifically — it seems that things may finally be cooling down for certain types of units, albeit very slightly.

According to new data from Rentals.ca and Bullpen Research & Consulting's rental report for March 2020 (based on data from the month of February 2020), rent for Canadian properties has gone down an average of 3 per cent overall since January and 3.4 per cent since the same time last year.

And, residential rent prices have generally been on the decrease since the hot rental market of summer 2019. 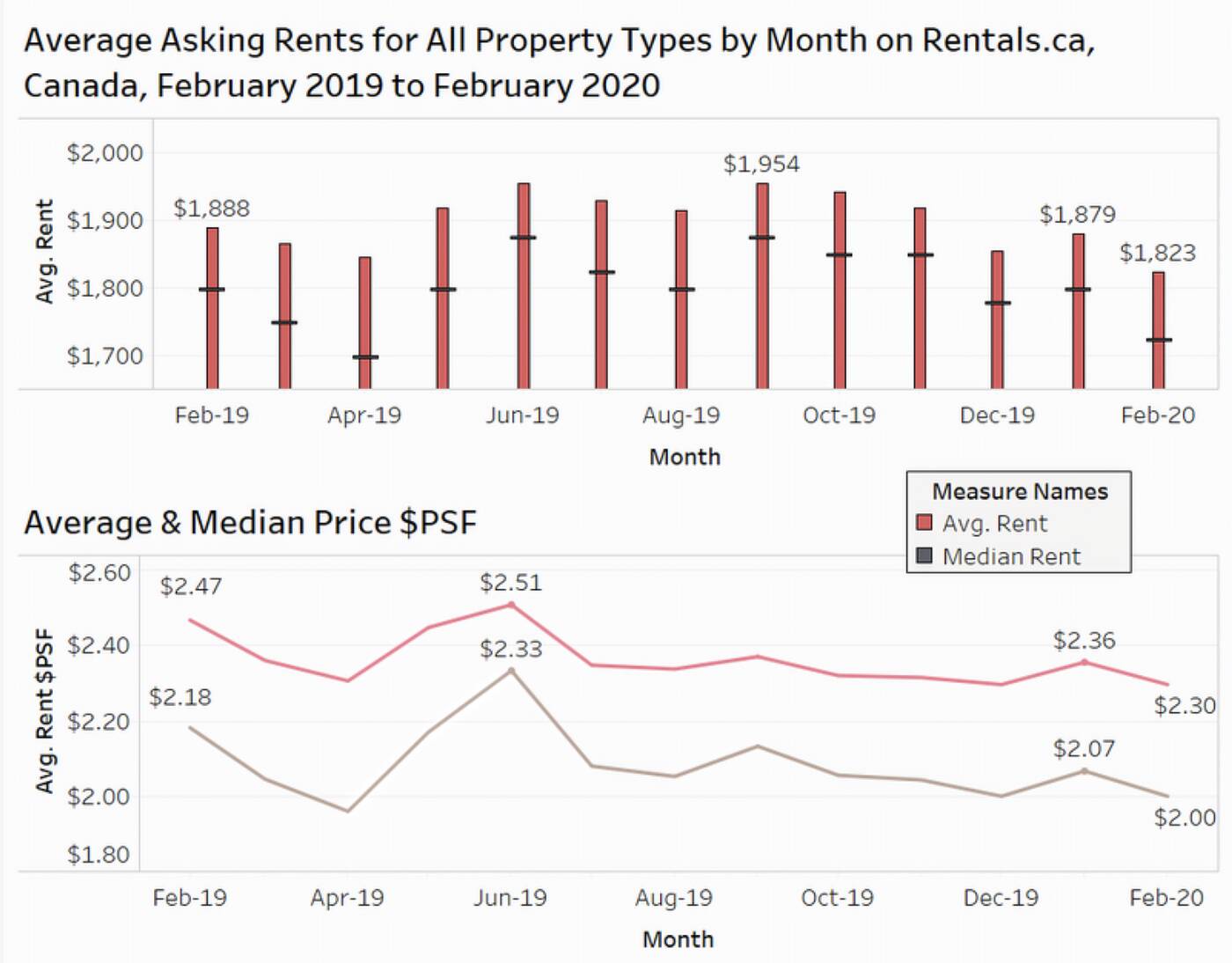 Average rent across Canada per month for the last year. Rentals.ca.

In Toronto, rents for one bedroom apartments are down 3.2 per cent month over month, and 0.1 per cent from February 2019.

But, the cost of rental apartments — as compared to condos, single-family homes and townhomes — is up about 3 per cent both from the previous month and the same time last year. And, though the average rent for a two bedroom unit is down 0.5 per cent from January, it's up a dramatic 9.3 per cent since February 2019.

Also, the city still has the highest rents of anywhere in Canada at $2,240 per month for a one bedroom and $2,910 for a two-bedroom (compared to $1,915 and $2,798 in somewhere like Vancouver, which is known to be expensive), and Ontario is still by far the costliest province to live in for tenants. 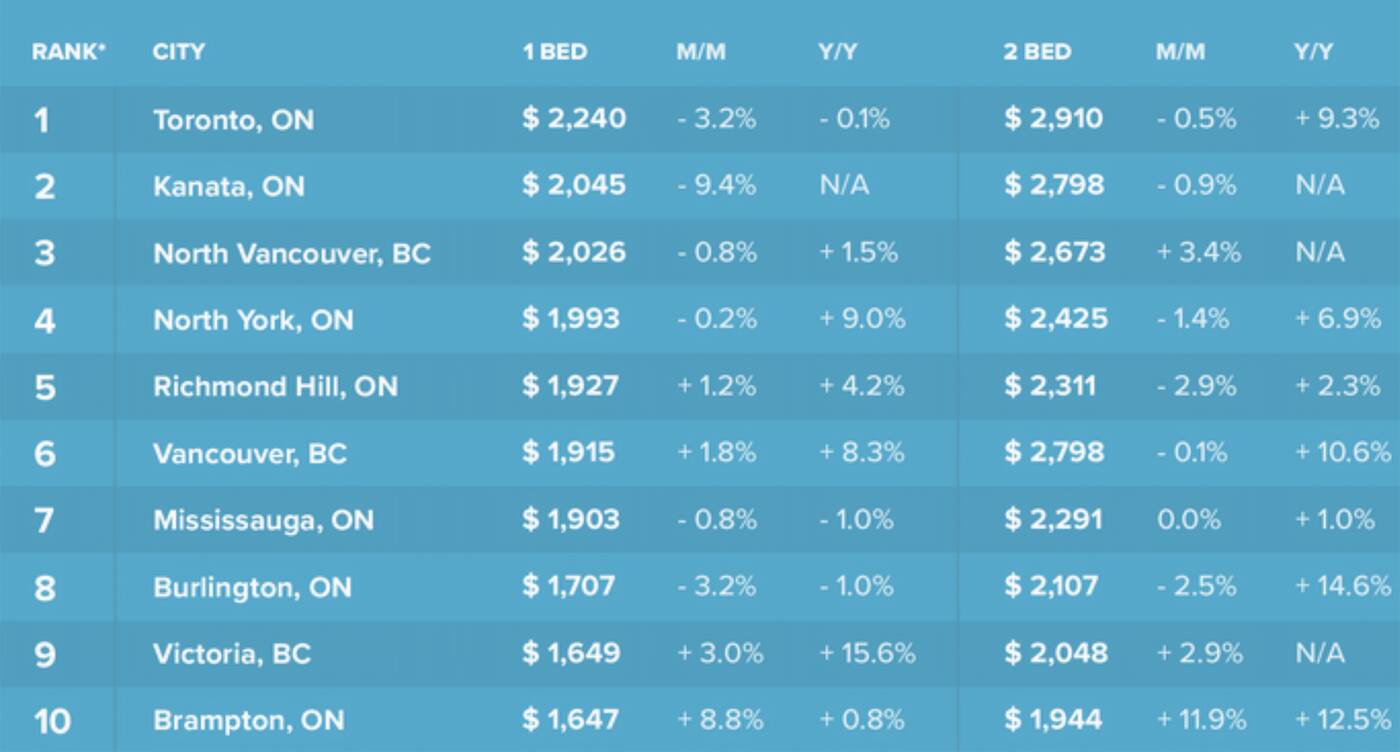 The ten Canadian cities with the steepest rents for one-bedroom apartments in February 2020. Rentals.ca.

Nearby townships in the GTA, like North York and Richmond Hill, were also high up on the list, with rents for a one bedroom averaging around $1,993 and $1,927, respectively.

Kanata, Ontario — just outside of Ottawa —  had the second-highest rental rate in the country, at $2,045 per month for a one bedroom (which was somehow a whopping 9.4 per cent lower than last month) and $2,798 for a two bedroom.

Unfortunately, costs for rental properties in general are significantly more in select cities in Canada than they were last year: Montreal's are up a staggering 31 per cent, Vancouver's are up 15 per cent, and Toronto's, 4 per cent to an average of $2,524 for all property types. 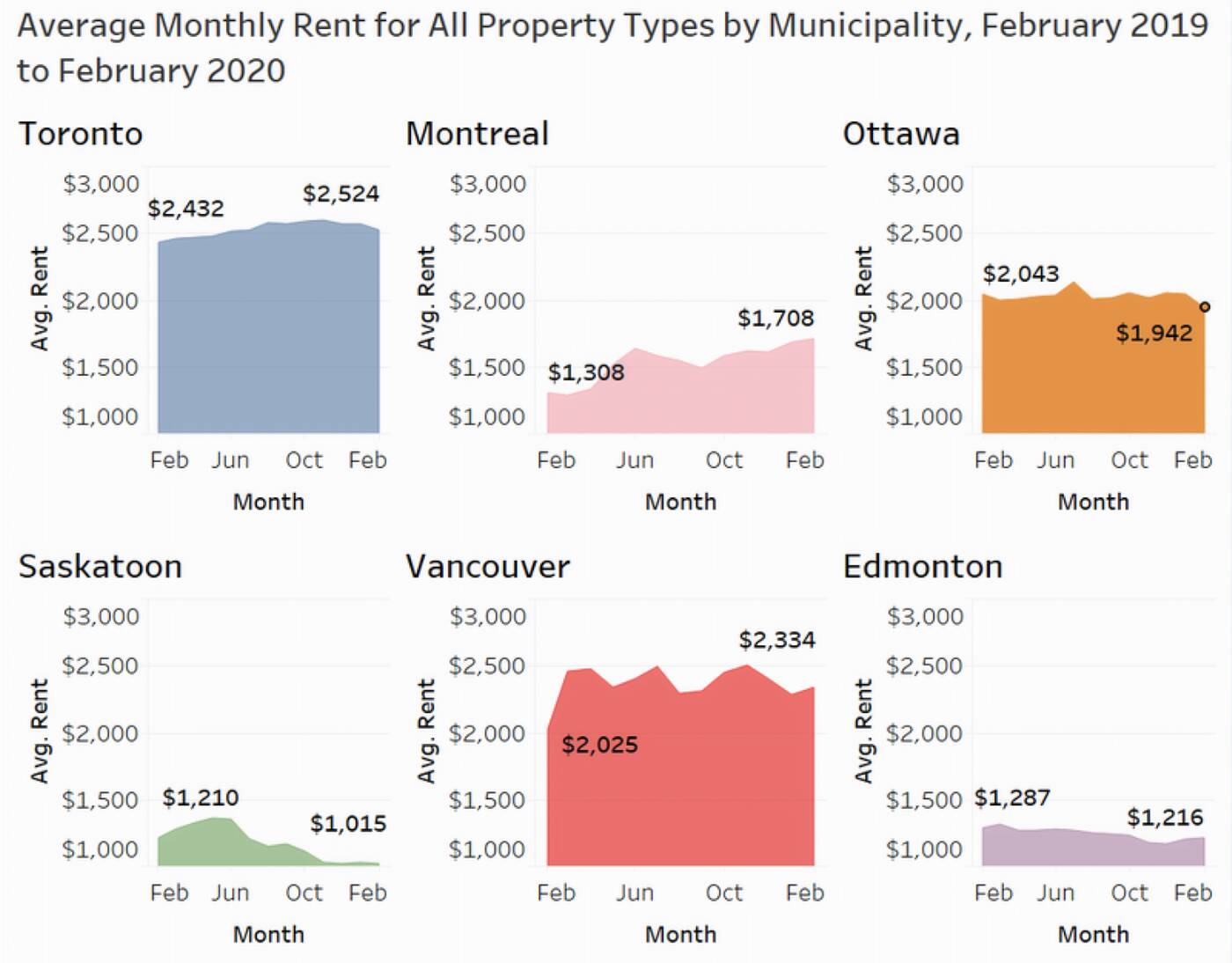 Average rent costs for all properties in various Canadian cities in February 2019 and February 2020. Rentals.ca.

But, the good news for tenants may ironically come as a result of the very scary news of the COVID-19 pandemic.

Experts predict that the rental market will slow and soften — as the rest of the economy has — while people put life decisions like moving and switching jobs on hold, and many face the reality of having substantially less income over the coming weeks.

"In the face of a global health crisis, landlords will have to decide to either lower rents, offer incentives, or simply wait and hope for some return to normalcy in a couple of months," the president of Bullpen Research & Consulting said in a statement with the above data. The firm also predicts a drop in apartment showings as people continue to socially isolate.

Regardless of rent is going up or down, many tenants in Toronto are planning to stop paying their landlords given the financial precarity that the pandemic has caused.