Weekend events in Toronto keep you indoors with the arts: the AGO's Basquiat exhibition officially opens up, Progress performance festival continues, and the Harbourfront has a stacked weekend for Black History Month. Then there's the Seinfeld ball, or if you're prepping for your Valentine, the Annex Flea might have what you're looking for.

Here are my picks for the top events happening in Toronto February 6-8, 2015.

Blackout5 (February 7-8, Queen Elizabeth Theatre)
Battle rap has taken the world by storm. Leagues have popped up all over the world, but arguably the biggest one of all is Toronto's own King of the Dot (KOTD). On February 7-8 they'll be hosting their biggest event to date: Blackout 5. Check out the line up here, though who knows who the special guests will be. M 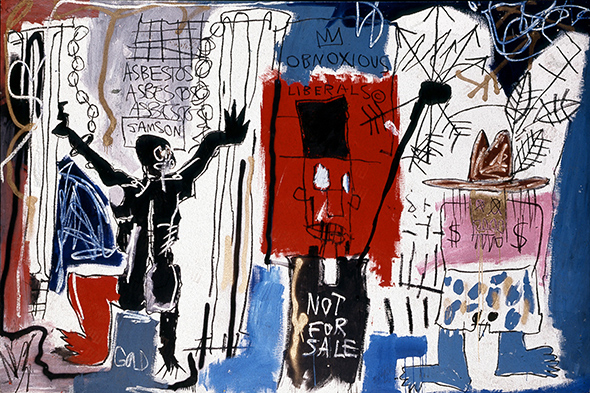 Jean-Michel Basquiat (February 7 - May 10, AGO)
Another AGO blockbuster, this is Canada's first large retrospective of the NYC graffiti/fine art artist. Basquiat's often massive paintings are fascinating to behold in person, as child-like sketches and sardonic scrawled wordplay tackle issues of racism, social justice, and politics that are unfortunately just as relevant today. Read our review here.

Progress (February 4-15)
Progress, Toronto's newest theatre festival, is the love-child of SummerWorks Performance Festival and The Theatre Centre, and promises to shake up the city's arts scene by bringing global talents to local audiences. While the outlook is international, the festival is very much rooted in this city's arts community, with each show curated by a Toronto company. See our preview here. SSZ

Abyss (Tarragon Mainspace, February 3 - March 15)
This thriller tracks the disappearance of Karla Richter, a 24 year old who vanishes on her way to the grocery store. Set in the European underworld, the play is at once a mystery and an exploration of the psyche of those who live amidst war. This, the English premiere of Maria Milisavljevic's Abyss, is directed by Richard Rose. KB

Then & Now presents Kuumba (February 6-8, Harbourfront Centre)
The Harbourfront hosts this celebration of African and Caribbean heritage for Black History month where many events are free including a screening of Sun Ra: A Joyful Noise, Curators of Hip Hop, and Soca on Ice. Check out the lineup on their website.

Winterlicious (January 30 - February 12)
Hope you've done your research on this annual prix fixe celebration: there are over 200 participating restaurants to choose from. Check out our guide of must-hit restuarants for Winterlicious 2015 here. LI

FeBREWary (February)
Beau's month-long celebration of beers is back in February with new special editions released each week and events, and tap take-overs happening at beer bars all month. LI

Giraffage (February 6, the Hoxton)
Up-and-coming California DJ/producer Giraffage (aka Charlie Yin) has been making a name for himself for his tripped-out and unpredictable remixes of pop and R&B hits. His productions feature dreamy atmospherics rubbing up against tough beats, sprinkled with his quirky sense of humour, and his DJ sets pack even more unexpected surprises into the mix. 10 pm, $15. BB

Turning Point (February 7, the Garrison)
A Man Called Warwick welcomes special guest Frederik Lavik all the way from Finland, who will be bringing selections from his vast collection of rare East African music. There's nothing else in Toronto quite like Turning Point's "tropical funk" mixture of sounds, and the event always brings out a dedicated room of dancers each month. 10 pm, $15. BB

Good Men, Good Women: The Films of Hou Hsiao-hsien (Jan 29 - March 1, TIFF)
TIFF presents a complete retrospective of Taiwanese director Hou Hsiao-hsien all through February. This weekend see Women and Café Lumière. Not to be missed for fans of new wave cinema.

Love After Materialism (February 7, Trinity Square Video)
Warm up for V-Day with some new media and video work on the themes of love, longing, desire, and all that nonsense by Cécile B. Evans, Karilynn Ming Ho, Jaakko Pallasvuo, and Heather Phillipson. The show is free to enter.

CineCycle Winter 2015 Toronto Open Screening (February 8, CineCycle)
No one will be turned away from this pay-what-you-can open screening at CineCycle on Spadina. Just watch the weirdo fun or bring your masterpieces or weirdo home movies (35mm, 16mm, 8mm, super 8 film, VHS, DVD, Blu-Ray, Quicktime, AVI, whatever) and sign up by 7pm.

Scenefeld: The Celebration (February 8, Double Double Land)
Toronto, what are you wearing to the normcore ball? On Sunday Double Double Land will hold "the Seinfeld costume-and-trivia party to end all Seinfeld costume-and-trivia parties," Scenefeld: The Celebration. If your trivia game is rough and you're low on frumpy 90s outfits, get serious about your Elaine dance and you can still be in the running for a prize. Read more here.

Annex Flea (Feb 8, Centre for Social Innovation)
The Annex Flea is holding a special Valentine's Day fair the weekend ahead of the big day, so you can snap up handcrafted gifts for the cutest person/people in your life. They're also hinting that potential cute people might be shopping at the flea. No promises.