Weekend events in Toronto could seem tame if viewed by Solstice celebrating Pagans from the distant past, but then again I think they'd find a noise march of electronic music players and bystanders recording cellphone vids of fire twirling rather overwhelming. As darkness falls, don't forget to buy your brothers and sisters' kids little knitted animal caps.

Here are my picks for the top events happening in Toronto from December 19-21, 2014.

Stout Night (December 20, Indie Ale House)
In the Junction, the Indie Alehouse's 3rd annual Stout Night is where beer snobs want to be. Don't get confused - the two Ontario stout tasting sessions are actually afternoon/early evening-ish: 1-4pm and 5-8pm. Both will be at IA's barrel at 165 Geary Ave.

Unsilent Night (December 19, Music Gallery)
Want to blast a boombox in the streets of Toronto? Not quite a flash mob, this is about as different as it gets than your usual Christmas caroling. Philip Kline's composition calls for a mass of marchers to BYO music for a dissonant, free-for-all holiday march. There's a PWYC fundraiser proper to follow at the Music Gallery. Learn more here.

Holiday classics at the Bloor (December 19-23, Bloor Hot Docs CInema)
The Bloor has caught the holiday spirit, and you can reserve free passes now for holiday and holiday-ish classics including Bad Santa, Elf, Miracle on 34th Street, A Christmas Story, Love Actually, and more. (None will be in 8 bit.)

Black Christmas (December 20, The Royal)
Need a break from warm and fuzzy Christmas classics like It's a Wonderful Life and A Christmas Carol? The Royal has you covered. Five days before Santa arrives, they'll be screening Black Christmas, the influential 1974 Canadian horror classic about a killer terrorizing a sorority house. The movie will be double-billed with fellow Can-Con flick, Cooper's Christmas. AH 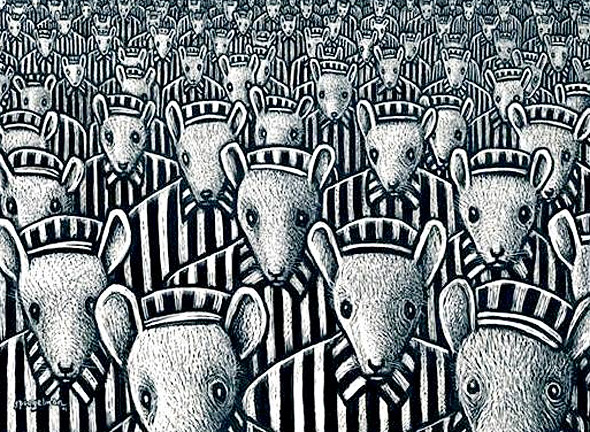 Art Spiegelman Retrospective (December 20, 2014 - March 15, 2015, AGO)
Pulitzer winner and one of the Time's 100 Most Influential People, the Maus cartoonist's work is a thrill to see in person. The AGO exhibit includes rarely seen works from Spiegelman's career, including autobiographical continuous strip called Portrait of the Artist as a Young %@?*!.

Beyonce VS the World (December 20, Henhouse)
This arty dance party will raise money for the upcoming Younger than Beyonce Gallery. Bey will, of course, feature on every other song throughout the night.

Austra (December 19, Opera House)
These bats of glittering neon wingspan may be more popular over in Europe, where dancing to strange electronic music is as natural as owning eighteen different plaid button downs is over here, but Toronto fans will show them a good time. Blue Hawaii will open.

Dennis Ferrer, (December 20, Ryze)
NYC DJ/producer Dennis Ferrer originally made his name with soulful jazzy deep house, but has since proven himself just as skilled at crafting dark minimal tech house grooves, giving him the versatility to play engaging, epic DJ sets. Expect him to give Ryze's powerful Dynacord sound system a real workout, not to mention sweating he'll inspire on the dance floor. 10pm, $20. BB

Nadja (December 20, Geary Lane)
After a season full of inventive and arty shows, Man Finds Fire has cooked up a wonderfully bleak way to celebrate the holidays at Geary Lane. Dubbed "A Nightmare Before Christmas," the night will be headlined by prolific drone-metal duo Nadja, accompanied by sombre soundsmith Black Walls and guitar experimentalist thisquietarmy. SK

The Artisans Gift Fair (December 20-21, Tranzac)
Do your craft pop up shopping without leaving the Annex by hitting this fair and grabbing everything else at Honest Ed's. This is the pro leagues for last minute shoppers. Sunday is your last chance to pop by the AGF and grab your nieces and nephews knitted animal caps.

Coconut Christmas Zine and Maker Fair (December 20, Xpace)
Drop into Xpace Saturday afternoon tote bags and music. If you got everyone on your list tote bags last year, tons of zines, comics, greeting cards, prints, t-shirts and more will also be on sale.

Popular event made famous by Kevin Hart is now in Toronto

10 free things to do in Toronto this fall

25 things to do in Toronto this Thanksgiving weekend 2022