Weekend events in Toronto is our guide to events happening this Friday, Saturday and Sunday. Here's what's happening in Toronto this November 8-10, 2013.

Toronto Reel Asian International Film Festival
This festival, a non-profit, annual event, is the largest of its kind in Canada and was founded back in 1997, showcasing the best of modern cinema from South Asia and its diaspora. This evening's opening gala centres on Bombay Talkies, and celebrates a century of Indian motion pictures and the great minds behind them, with four short films being shown. An after-party at Empire Lounge in Yorkville closes this first evening out with a bang. Read our must-see film picks here. Until November 16th. Various Venues and prices.

Buffer Festival
The first ever Buffer Festival is coming to Toronto this weekend to help all you YouTube addicts to finally leave your homes. Six venues will host two types of feature-length screenings and various YouTube celebrities are making their way into town. Some shows will be centered around popular YouTubers, screening a slew of the best videos from their successful channels while others will display a collection of videos from a common genre, like musical comedies or viral videos. Read our preview here. November 8th - 10th, various venues and showtimes.

The Toronto 48 Hour Film Project: Best short films of 2013
Think you could make an entire film in one weekend? A screening and award ceremony will take place this Sunday for to award the winners of the hundreds of intrepid filmmakers competed in the Toronto 48 Hour Film Project. Hundreds filmmakers took part, and each team had only 48 hours to write, shoot and edit a 4-7 minute film. The winning films won't show the strain of the time limit those — these stand out films will amaze you. Sunday, November 10th, 3:30pm - 6:00pm, Bloor/Hot Docs Cinema (506 Bloor Street West,) $10 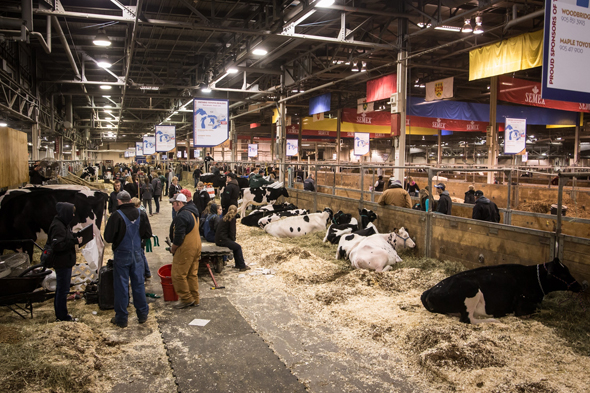 Royal Winter Fair
The farm is in city — the 91st annual Royal Agricultural Winter Fair, the world's largest combined indoor agricultural fair and international equestrian competition, is underway at the Exhibition grounds. Look for cute baby animals at the petting zoo, butter sculptures, chef competitions, giant vegetables (pumpkins weighing over 1000 pounds), and of course the Horse Show. At the fair you can learn more about where our food comes from and get a chance to commune with animals large and small. Check out our photo gallery here. Until November 10, Ricoh Coliseum and Direct Energy Centre (Exhibition Place) prices may vary

Day of the Dead
This weekend at the Harbourfront Centre you can still take part in Day of the Dead/DÃ¬a de los Muertos festivities. This is Toronto's longest running Day of the Dead festival. There will be Mexican and Latin foods aplenty le plus celebrations for the whole family will be taking place during the afternoons including handcrafted ofrendas (altars to the dead), film, concerts, and much more. Saturday, November 9 - Sunday, November 10, noon to 6pm, Harbourfront Centre (235 Queens Quay West) 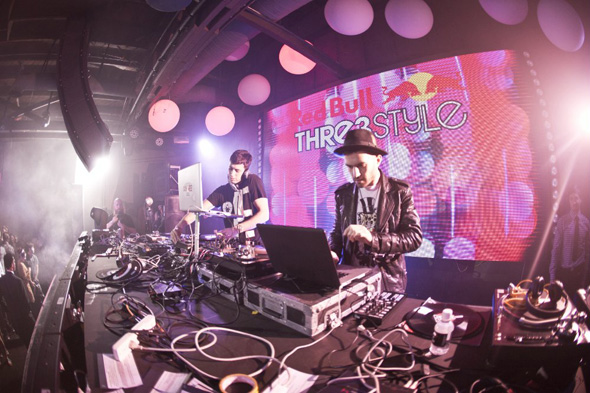 Red Bull Thre3style - World's Biggest DJ Competition
This weekend the Red Bull Thre3style World Final DJ Championship comes to its grand finale. This competition brings some of the world's best DJs together, and puts them head-to-head, and judged not only on their technical skills and musical taste, but their ability to move a crowd on the dancefloor. Tonight is World Finals Night 4 with Ali Shaheed Muhammad (A Tribe Called Quest) vs Maseo (De La Soul) plus Cosmo Baker at The Danforth Music Hall, then things conclude Saturday at Kool Haus with A Tribe Called Red, AutoErotique, Grandtheft, Keys N Krates & Thugli. Read our preview here. Friday, 8pm at the Danforth Music Hall (147 Danforth Avenue) $28.50 and Saturday, 8pm at Kool Haus (132 Queens Quay East) $16.50

The 2013 Canadian Beatbox Championships
This Saturday at Mod Club 16 contenders from Vancouver to Halifax (including three Toronto competitors) will compete for the final title to represent Canada in the World Beatbox Battle Finals. The night will feature live battles, performances, live art and giveaways. The night will also include a reunion between Rahzel (Godfather of Noyze; The Roots,) and Scratch (Vocal DJ; The Roots) for a Legends Battle Showcase. Saturday, November 9, 8pm, Mod Club, (722 College St.)

Destroyer
The number one rule of Canadian music is never miss a Dan Bejar appearance. Intensely strange and famously surly, Bejar has, or at least ought to have by now, surpassed Leonard Cohen as our obtuse peoples' poet, and his new album Five Spanish Songs is entirely in Spanish. The deadly word-smith and master of melody will be performing solo and claims this tour will be your last chance to see Destroyer live until 2015. November 9, 9pm, The Great Hall (1087 Queen W,) $16

Fucked Up play in Scarborough
The Rockpile East is one of Toronto's newest venues, and if you want to see Fucked Up this weekend you'll get to check it out. Yes, it's in Scarborough. The critically acclaimed Toronto indie/hardcore band have never played this 'burb before, so expect a lot of excited fans young and old to pack into the all ages, prison themed venue. Who says Toronto isn't weird? Beliefs and Doom Squad are also on the bill. The show will end early, so you can still catch the TTC back downtown. Rockpile East (2787A Eglinton Ave East), Saturday, November 9, 6:30pm $13

Feast in the East
The 31st Feast in the East night will gather bands, food, and art installations together in the east end of Toronto (but not in Scarborough.) Gerrard Art Space in Little India is the perfect place to spend an evening with some up and coming musical talent, including synthy Saturns, prog-pop Hermit Thrushes, and freaky Mannerisms. Dinner is included in the ticket price and the show is slated to end by 11pm (more like midnight in reality by my guess). Saturday, November 9, 8pm, Gerrard Art Space (1390 Gerrard St. East,) $8

For more music listings, check out our This Week in Music,Fall Concerts, November Concerts, and Upcoming Hip Hop Shows posts.

Moss Park
A follow up to Tough!, George F. Walker revisits his characters Bobby and Tina in Moss Park. This time around, the couple have a baby to take care of, which makes the struggle to survive above the poverty line all the more difficult. The play is a contemporary look at the challenges facing Canadian families when all hope seems lost. Graeme McComb and Haley McGee are the young couple looking towards an uncertain future. Read our review here. Until November 16, Theatre Passe Muraille (16 Ryerson Ave,) various showtimes, $20-$32

Toronto International Antiquarian Book Fair
Usually reclusive and hermitted away in their shops updating their Abebooks.com listings, antiquarian book sellers are some of the world's most interesting — and okay, nerdiest — people. This weekend at the AGO you can pick their brains and browse their carefully curated wares. Forty booksellers from around the world will be showing and selling antiquarian books (leather bound ancient tomes, first edition novels, rare novelties, you name it) plus maps, prints, modern first editions, manuscripts and more. Admission is steep at $19.50 but it will also get you into the usual exhibits at the AGO. Friday November 8 5pm to 9pm, Saturday, November 9, 10am to 5:30pm, Sunday, November 10, noon - 4:30pm, Art Gallery of Ontario (317 Dundas St W,) $19.50

David Cronenberg: Evolution
On now at the HSBC Gallery at TIFF Bell Lightbox is hosting TIFF's first major original exhibition, David Cronenberg: Evolution. A portion of the theatre has morphed into a shrine tracing the artist's development, an "experiential virtual museum," and a retrospective of Cronenberg's films. Costumes, props, art work, and set design drawings and a virtual exhibition of essays, academic writing, behind-the-scenes footage and interviews with Cronenberg's many collaborators are on display as well. Check out our some creepy photos in our slideshow here. Until Jan 19, TIFF Bell Lightbox (350 King Street West).

Berenson Fine Arts Presents 'Sanctuary'
Visit this retrospective of the works of Marco Sassone to find out why the likes of Ella Fitzgerald, Tina Turner, Sophia Lauren and Luciano Pavarotti each had to own their own Sassone paintings. Works will be on display will include a series on railroad tracks in Toronto, works investigating homelessness in the 90's, 20 oil paintings and works on paper, and various early works. Berenson Fine Art (212 Avenue Road) until Thursday, December 12, free.

Just for Laughs Comedy Tour
Just for Laughs' touring ensemble rolls into town with more than a few familiar faces, namely Tom Papa, Alonzo Bodden, Orny Adams, Ben Seidman and host Darrin Rose. All will perform tonight at Massey Hall, so if these characters (or comedy magicians) strike your funny bone, you know where to be. Friday, November 8, 7:30pm, Massey Hall (178 Victoria St,) $48 - $68.

2013 International Home Show
Running from tonight until Sunday, The International Centre will house the 2013 International Home Show. Admission will also get you into the Better Living Boomer Show and the third annual Interior Decorating Show. Whether you want to redo the exterior of your sweet Wychwood Park mansion or just need some tips on gourmet food and wine, this is the place to be. Tons of celebs will be on hand passing on their wisdom, including Frank Ferragine, Bryan Baeumler, Jackie Morra, Nicholas Rosaci, Donna Robertson, and Linda Gough. The International Centre (6900 Airport Rd.) Thursday, November 7 - Sunday, November 10, $15.

Vintage Clothing Swap
Nothing beats a cozy new sweater from a clothing swap to beat the fall blues. You can lug up to 30 items of vintage clothing, shoes, and accessories to the Vintage Clothing Swap at the Arts Market on Saturday and leave with a whole new winter wardrobe, or just a couple of special new treasures. Be sure to check your swappables though — this is a vintage swap so all items must at least 20 year old. Save your 90's garb for Sunday's swap (see below). Saturday, November 9, noon - 4pm, Arts Market (846 College St,) $5

Charity Clothing Swap
Pop by Tallboys from 1:30 pm until 5 pm on Sunday with a heap of gently used clothing, $8 admission and your game face ready for action. You can swap 'til you drop while also helping homeless youth at risk; all proceeds from this Charity Clothing Swap hosted by Horizons For Youth will go right to the United Way. Sunday, November 10, 1:30 - 5pm, Tallboys (838 Bloor St W,) $8

Toronto Indie Arts Market - November Early Holiday Market
This Saturday at the Gladstone the Toronto Indie Arts Market thinks you should get started on your holiday shopping a little early. If that's daunting, you could always just go and find some sweet trinkets for yourself. Over 50 vendors of art, crafts, food, fashion, small press and more will be showing their wares, so you can munch a cupcake, try on handmade mittens and flip through zines. Saturday, November 9, 10:30 - 4:30, Gladstone Hotel (1214 Queen Street West), $5.

Walk the Don: Burke Brook
It's not that cold yet, you softies, and this Sunday the weather is looking to be just fine for a leisurely walk. The Don Watershed Regeneration Council is hosting guided interpretive walks exploring Toronto's largest watershed. From their site: "this walk follows a section of Burke Brook, a tributary of the West Don River, as it winds its way through a varied urban area. The walk begins where the stream is buried beneath a formal garden and ends as it flows naturally through a forested ravine. Along the way, specific plants will be described and identified." Sunday, November 10, 1pm, the corner of Yonge Street and Chatsworth Drive at Alexander Muir Memorial Gardens (2901 Yonge Street,) free