Labour Day events in Toronto is our guide to events happening this Friday, Saturday and Sunday. Here's what's happening in Toronto this August 30-September 1, 2013

CNE & Canadian International Air Show
It's closing weekend at the Ex, which means the Air Show is in town. Earlier today, the deafening sound of jets pierced the sky marking its arrival and scaring the crap of a few people (as it always does). Not everyone's a fan, of course, but the event is pretty much inescapable if you're in the city this weekend. As for the CNE, if you haven't made it out, now's your last chance. Even if there's been some problems with the food, there's still lots to do.
Canadian National Exhibition 10AM $8

Hot & Spicy Food Festival
You've had enough weekends to eat hot dogs and potato salad, this is the weekend to try something new. Harbourfront Centre's weekend summer festivals all wind down to this one: the Hot & Spicy Food Festival. The World CafĂŠ and Lakeview Market will both prominently feature foods, sauces and condiments that will heat your palette. The highlight of this festival has to be the cooking demos with Joel Carriere of Dine Alone Records and Jordan Hastings of Alexisonfire collaborating under their D.A. Foods moniker to share their recipe for Southern Succotash Salad with BBQ Chicken and Tomatillo Salsa. Performances by Grey Kingdom and Canailles also take place this weekend in honour of the festival. Go out and eat!
Harbourfront Centre (235 Queens Quay West), August 30-September 2, 2013, 6PM Free

Junction Food Tour
How better can you use a long weekend than by trying the best restaurants in the Junction without having to worry about the regular weekend waitlists and lines? The Junction Food Tour takes foodies around the up-and-coming neighbourhood to sample 5 shops and restaurants while learning the community history. The formerly dry neighbourhood has a pretty interesting story surrounding booze, too, so be sure to drink while you eat to make the tour even more fun (though your guide may not encourage inebration). Sign up for this delightful little afternoon on the Foodies on Foot website and sample the best in independent foodmakers in the west.
2859 Dundas Street West, August 31, 2013, 11AM $65

Cadence Weapon
Dundas Square goes indie on Fridays with free new music by talented yet unsigned performers and this Friday, rapper Cadence Weapon will be featured. Though the square is the polar opposite of a loft party, the National Post has heralded this three-time Polaris Prize nominee (who was short listed twice) as Canada's most creative rapper. Cadence Weapon hits the stage at 8PM for indie Friday (but the beer garden at the Hard Rock opens at 4, just saying). Just show up and enjoy!
Yonge-Dundas Square (1 Dundas Street East), August 30, 2013, 8PM Free

Depeche Mode
Depeche Mode is still kicking around, still making music and still touring but we know the real reason you should go to their Sunday night show at the Amphitheatre is to relive their '80s glory days. The English electronic band are probably best known for their 1990 song "Personal Jesus" or '91's "Enjoy the Silence" and they'll no doubt play those hits along with newer work from their 2013 album Delta Machine. Limited tickets are still available through Ticketmaster.
Molson Canadian Amphitheatre (909 Lakeshore Boulevard West), September 1, 2013, 7:30PM

UNIFEST featuring Stars, Les Colocs, Blackie and the Rodeo Kings, and DJ Hedspin
Apparently there's a new union in town and to celebrate its conception, they're throwing a free concert with a pretty good line-up! Unifor, a hybrid union of the Communications Energy and Paperworkers' Union and the Canadian Auto Workers, secured Stars, Les Colocs, Black and the Rodeo Kings and more for their big party in Nathan Phillips Square this Sunday. If you support unions and support good free music, why not stop by? Fight for your right and all that good stuff.
Nathan Phillips Square (100 Queen Street West), September 1, 2013, 6:30PM Free

For more music listings, check out our This Week in Music and September Concerts roundup posts.

Buffy the Vampire Slayer: Once More With Feeling & Dr. Horrible's Sing-Along Blog
Joss Whedon groupies like my friend Jakub will love this: The Storefront Theatre is featuring a double bill of theatrical performances of the director's best and geekiest work, reimagined. The characters of "Buffy the Vampire Slayer" will come to life in Buffy the Vampire Slayer: Once More With Feeling and the musical webseries Dr. Horrible's Sing-Along Blog will feature musical performances in three acts. Geek out for two days only as only three performances are scheduled this Saturday and Sunday.
The Storefront Theatre (955 Bloor Street West), August 31-September 1, 2013, 2PM, 8PM $10

Fortune and Men's Eyes
Emerging theatre talent will star in this re-envisioning of John Herbert's classic Fortune and Men's Eyes, which opens at Dancemakers Studio in the Distillery District this Sunday. Directed by Stefan Dzeparoski and starring David Coomber, Julian DeZotti, Cyrus Faird and Alex Fiddes, this play explores the brutality of prison life through the eyes of a naĂŻve prisoner and his three cellmates. Tickets are available through TOtix. The show opens on Sunday.
Dancemakers Studio (9 Mill Street, Studio 313), September 1-8, 2013, 8PM $29 general, $20 student/senior/arts worker 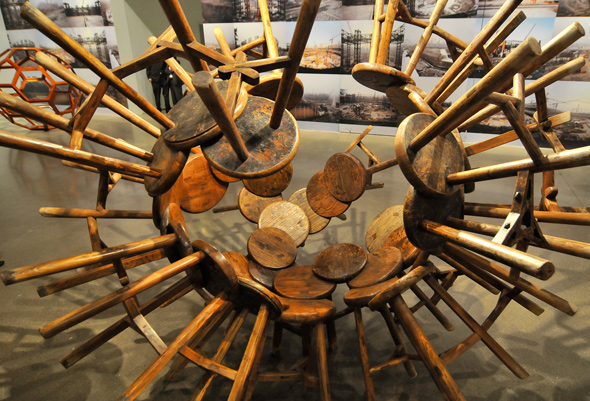 Ai Weiwei: According to What?
According to What?, Ai Weiwei's first TO exhibition continues at the Art Gallery of Ontario. Ai Weiwei is a modern Chinese artist, who employs a number of different media to express his interests and viewpoints, which often involve politics and the human condition. He has worked in sculpture, film, photography, installation, and more. He also served as artistic consultant to Swiss architects Herzog & de Meuron for the construction of the Beijing National Stadium in anticipation of the 2008 Olympics. According to What? runs until October 27th. Check out our full preview of the exhibit here.
Art Gallery of Ontario (317 Dundas Street West) $25

Labour of Love
LoL returns for its annual two-day Labour Day weekend party at Guvernment, with an all-night line-up of DJs, electronic and D&B musicians. This year's acts at the city's largest include Mark Oliver, Steve Angello, Manzone & Strong, Tim Mason, Showtek, Chase and Status, and more. Wristbands are still available through the Guvernment's website and the pass is good for both nights.
Guvernment Entertainment Complex (132 Queens Quay East), August 31-September 1, 2013, 10PM $115

Artfest Toronto
Stuck in the city for the last long weekend of summer? Wander down the laneways and of the Distillery District if you're looking for something different because Artfest is setting up in all of the nooks and crannies of the cobble-stoned neighbourhood for the duration of the long weekend. Sculptors, painters, crafters, musicians and photographers will be performing, selling their work at booths and being chatty folk with those who stop by to visit the 7th annual art show and festival. There will be hundreds of vendors out between 11AM and 6PM daily until Labour Day.
The Historic Distillery District (55 Mill Street), August 30-September 2, 2013, 11AM Free

The Art of Storytelling
Storytelling and spoken word hit the stage at Measure Bar, with ten artists getting up to share their stories through readings, recitals and music. Hosted by Tika Simone, The Art of Storytelling will be a night of personal retellings and truths by Toronto performers who aren't ashamed to speak to who they are and where they come from. DJs will be on hand to get the party moving once the performances are done but get there early as admission goes up after 10PM.
Measure Bar (296 Brunswick Avenue), September 1-2, 2013, 8PM $10