Weekend events in Toronto is our guide to events happening every Friday, Saturday and Sunday. Watch for it here on Fridays around midday. Here's what's happening in Toronto this weekend, June 1-3, 2012.

Beatlemania
Every month the Piston hosts a mega-dance party featuring DJs Bangs & Blush. Come together, hop aboard the yellow submarine, and twist and shout the night away as the music rolls you back to the '60s and lets you dance to your favourite classics.
The Piston (937 Bloor St W), June 1st, 10pm, $5

Super Smash Burlesque
Underground Peepshow takes you back to a time when things were simpler, and presents a delightfully nerdy--with equal parts sexy--Nintendo-themed burlesque show. The night will showcase performances from 15 burlesque performers, and will be hosted by Velvet Valhalla and Alex. This evening will bring out the super-nerd in all of us.
Toronto Underground Cinema (186 Spadina Ave), June 2nd, 9pm, $15 at the door or $12 in advance

#Sequelseries Part B: Back to the Future 2
#Sequelseries is a three-part concept party fusing films, musicians, and music at Cinecycle. On Friday, invoke Marty McFly, hoverboards, that sexy Delorean, and the infamous Nikes. There will be live music, popcorn, cheap beer, and DJs playing music inspired by the film and its era.
Cinecycle (129 Spadina Ave), June 1. Movie starts at 10pm, doors at 9. $5 in advance, $7 at the door.

Sing-a-long Grease
Calling all T-birds and Pink Ladies! Bring your enthusiasm, friends, and your vocal chords to the TIFF Lightbox this weekend for the brand-new sing-a-long version of this summertime classic. Come get your summer lovin' amped up with 110 minutes of '70s nostalgia as everyone sings along to their favourite tunes of Grease. They say there will be some hand-jiving, too. Costumes are encouraged!
Tiff Bell Lightbox (350 King St W) June 2nd and 3rd, 1pm

Free Film Screenings in Dufferin Grove Park
To mark the start of the Worldwide Short Film Festival, Canadian Film Centre is hosting free short films in the park on Sunday afternoon and evening. The afternoon show will be aimed at younger audiences and will feature animated films. Bring a picnic! The evening will showcase shorter films in a series called Christmas in June, just in case you were already tired of the summer heat. The WSFF starts on June 5th and runs through to June 10th.
Dufferin Grove park (875 Dufferin St) June 3rd at 12pm and 9pm

JANGBANG Presents: Tournament of Tacos!
JangBang bar is enlisting your help to choose the newest additions to their menu. On Saturday when you come to the restaurant, you can chow down on samples of their newest, special taco creations. When you tweet with the hashtag #TopTaco, you can select your favourite and the best taco will get a permanent spot on the JangBang menu. Plus, there are rumours of other surprises, too.
JangBang (430 College st) June 2nd, 5pm-11pm 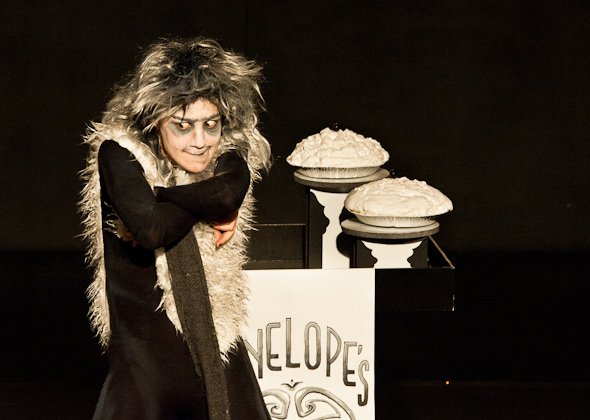 Toronto Festival of Clowns
The Toronto Festival of Clowns is the only festival in Canada dedicated to physical theatre and clown. There will be spectacular acts from Toronto, Ottawa, Montreal, Edmonton, and Vancouver coming together this weekend for the festival's 7th year. If you have a fear of traditional, birthday-party Bozo clowns, then fear not because the festival clowns explore many other styles of clowning. There will be dance, stage combat, bouffon, character and several types of clown style. Come and support this vibrant community of performers and artists.
Scotia Studio Theatre, May 31st-June 2nd, various times.

For more theatre events, check out our This Week in Theatre post.

FOAM - Festival of Art and Music
This Saturday marks the debut of FOAM at Evergreen Brickworks, which aims to create at "cultural mixtape" of Toronto's music and art scenes. Emerging and established Toronto artists alike will join together to create visual art installations using sound, space, and light. Artists will use recycled and discarded materials, which will promote sustainability and center around their theme of Construct/Deconstruct, while DJs M.O.S., Tom Wrecks, and CrashDex blast the best tunes. There will also be s'mores, beer, and a BBQ menu.
Evergreen Brickworks (550 Bayview Ave), June 2nd, 9pm. Tickets are $35 in advance, or $50 at the door.

Steam Whistle Unsigned #22
This will be the fifth year that Toronto's own brewery showcases some of Canada's up-and-coming musicians. Steam Whistle is a passionate supporter of Canadian independent musicians and hopes to bring light to talented folks. With evenings taking place in a few other cities across Canada, the Unsigned series has highlighted over 70 musicians in the past couple of years. This year, featured acts include Wilderness of Manitoba, Amos the Transparent, and Cai.ro
Steam Whistle Brewery, 255 Bremner Bvld., June 1st, 8pm

Women vs. Men Comedy Show
All right. Gendered battles come to the surface once more, this time with a focus on giggling. Does gender play a role in a comedian's success? Are men and women really that different? Some say yes, some say no. Four of Canada's funniest individuals will face off this weekend in hopes of proving, once and for all, who is funnier: men or women?
Toronto Underground Cinema (186 Spadina Ave), June 1st, 8pm

Lead photo by dzgnboy in the blogTO Flickr pool