Times are rough for everyone in Toronto right now as the coronavirus lockdown drags on for a third week (with at least 12 more to come) and the rules about what we can and cannot do grow ever more restrictive.

We don't all have Bridle Path mansions with private basketball courts to roam in these trying times, but we can now at least see what that might look like thanks to Drake's latest video.

The Toronto-born Grammy winner dropped a surprise track and accompanying music video on Thursday that appears to have been shot almost entirely in self-quarantine.

Called "Toosie Slide," the song is every bit as TikTok dance challenge-baiting as it sounds.

With all of two actual moves, it's certainly no "Cha-Cha Slide" or "Cupid Shuffle," but the track itself is at least good enough to replace R. Kelly's "Step In The Name of Love" as a default line dance jam.

The video, on the other hand, is awesome, if only for letting us see Drake dance through his palatial house wearing a Nike hijab and $25,000 winter jacket. 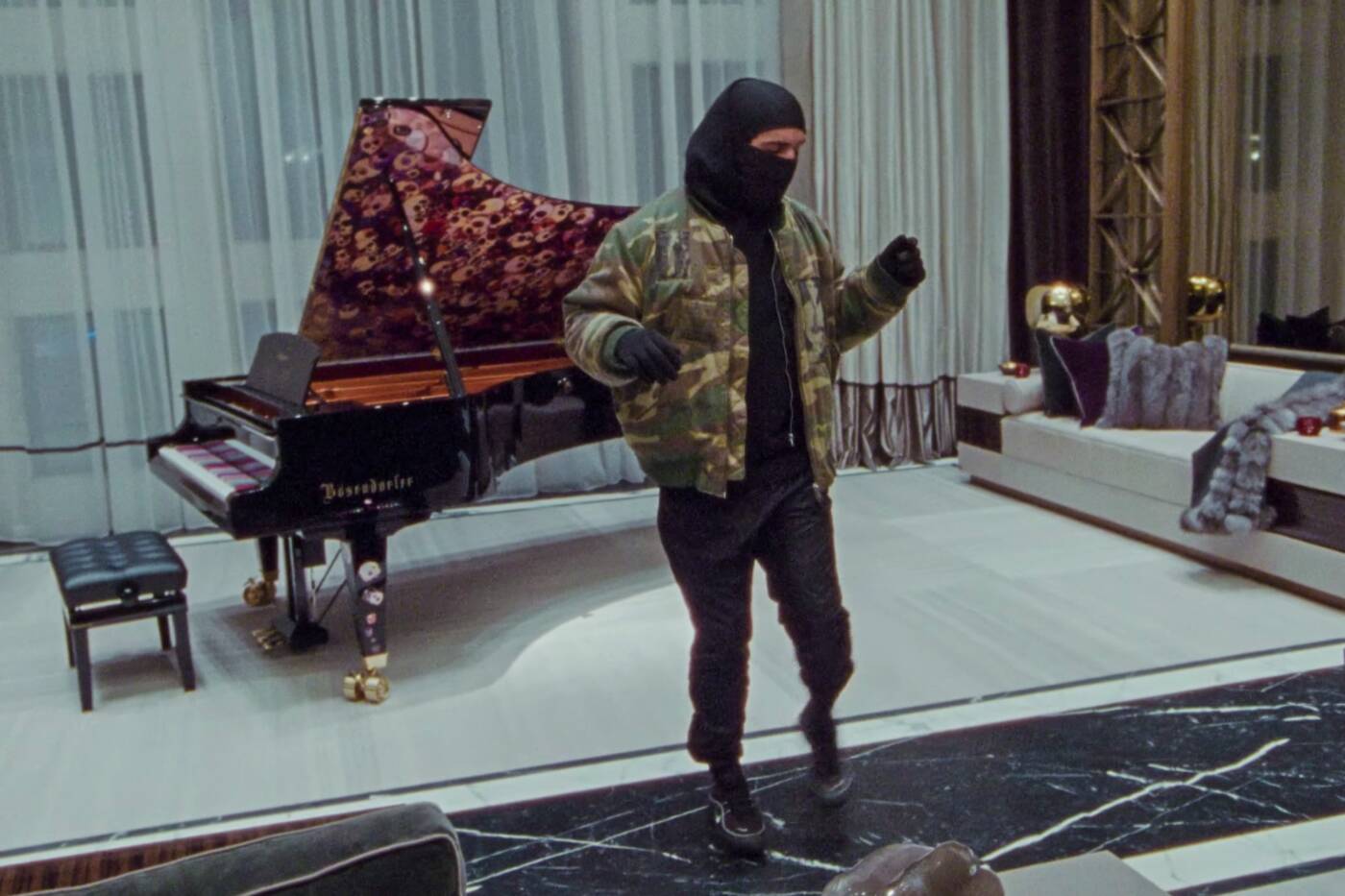 The just over five-minute-long work of art begins with several shots of downtown Toronto looking empty. Ghostly. Devoid of people amid the COVID-19 epidemic.

Then, we are transported to Drake's trophy room, where we see the artist looking at his many Grammy, Billboard, MTV Music and other 180+ awards. 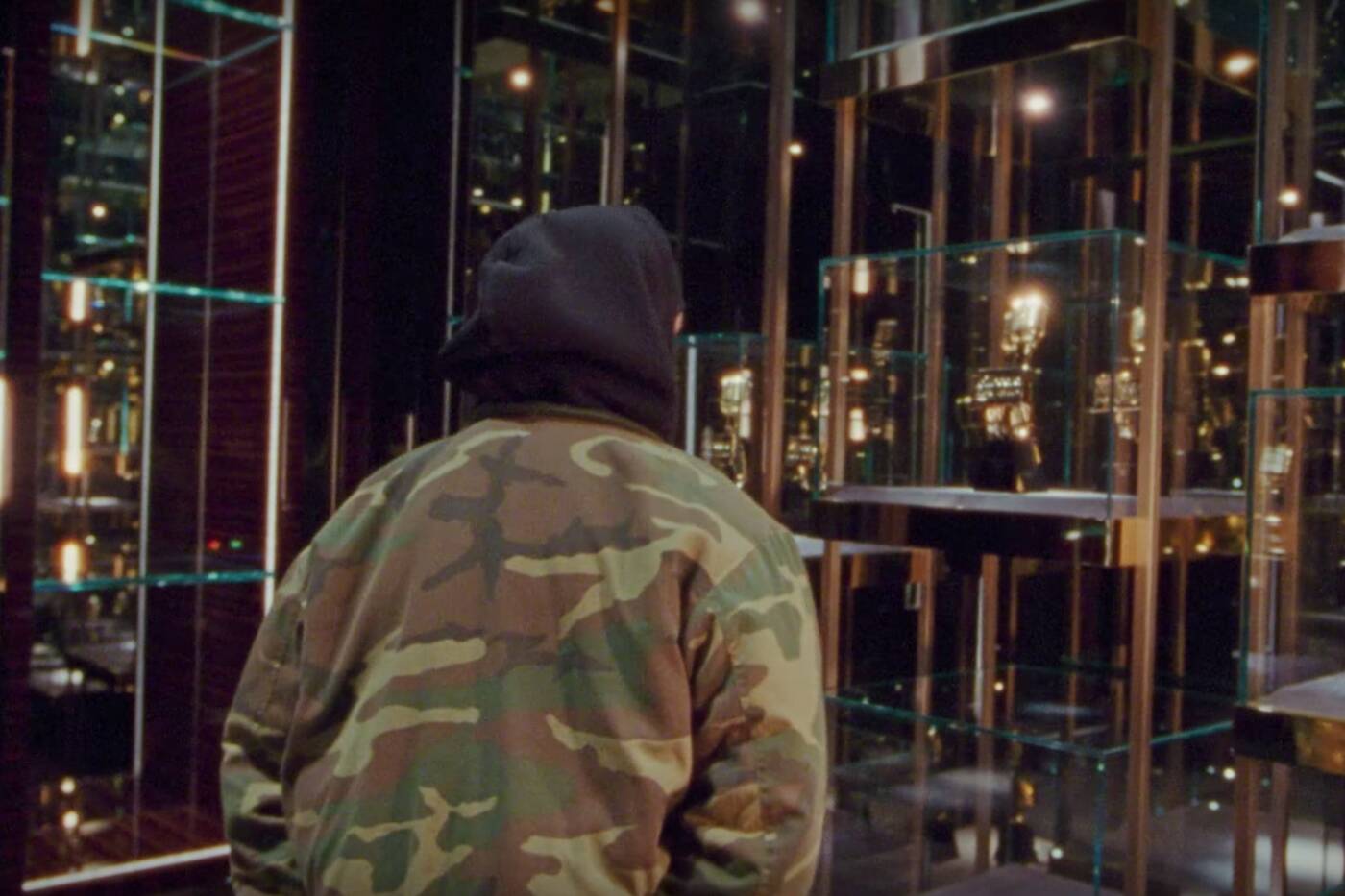 Drake walks into what appears to be an office of some sort, where a desk is strewn with what I can only assume are rare and expensive basketball jerseys — two of which bear the name "Bryant," one as 8, one as 24. 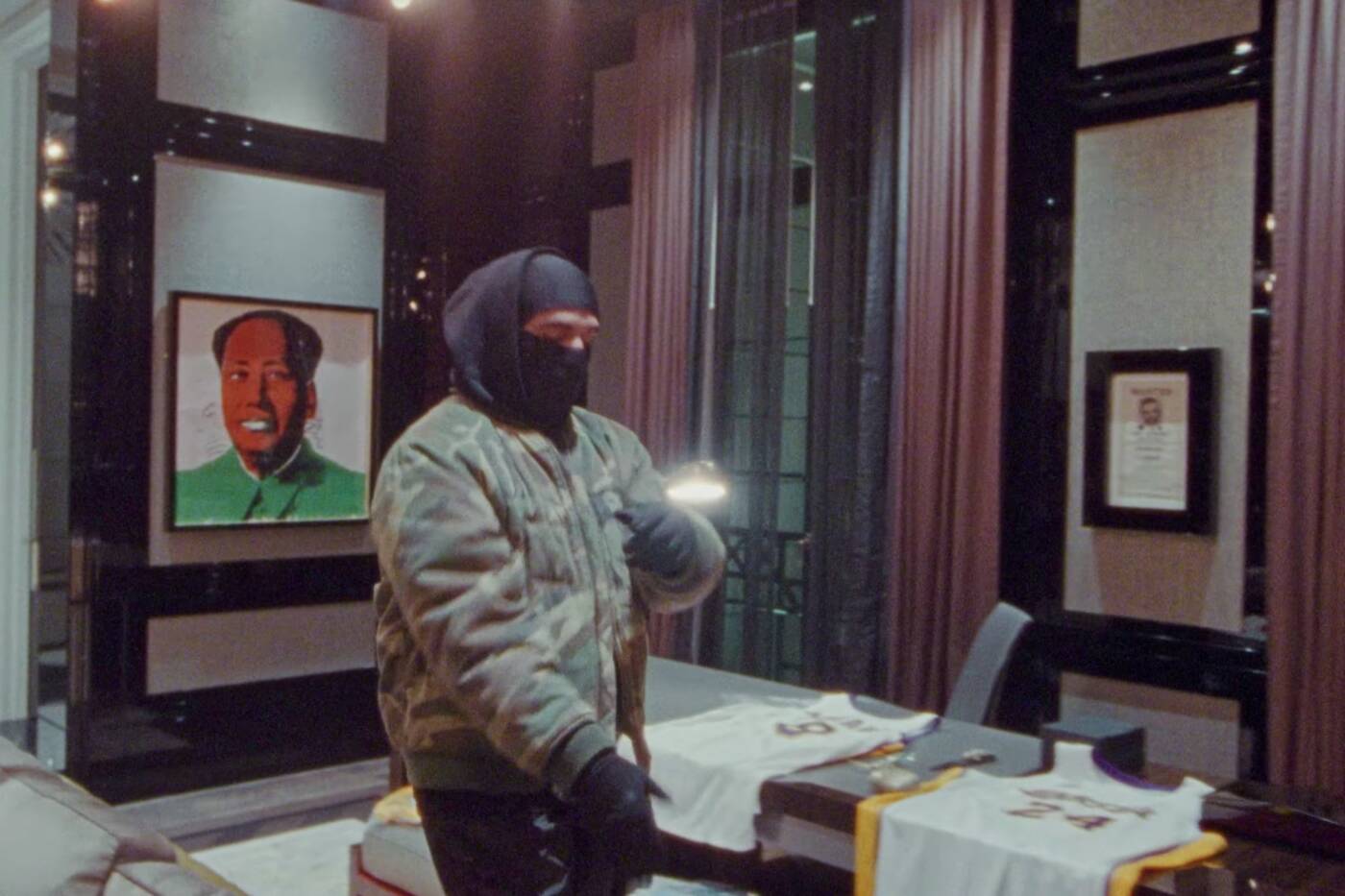 The rapper begins his song by detailing some of what he's wearing, as is common among his contemporaries: black leather gloves without sequins, a jacket with buckles on it and then something about Nike cross body having a piece in it.

He then moves to an impressive marble foyer where he performs the toosie slide between two flayed companion figures by the artist KAWS. 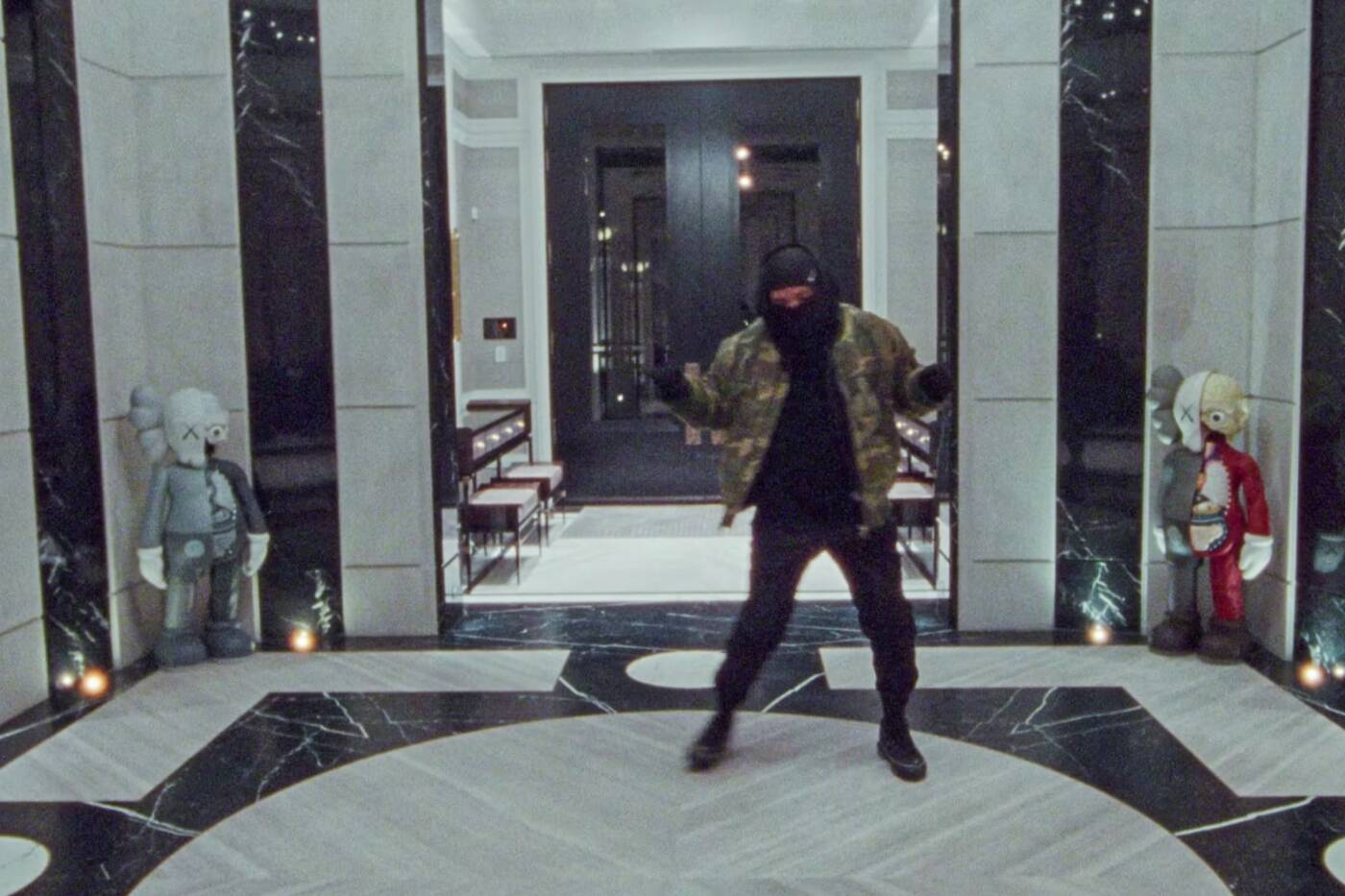 The artist (successfully) attempts one of Michael Jackson's signature moves before walking past one of his several rumoured bars and then, once again, dancing in front of a gorgeous, custom-looking piano. 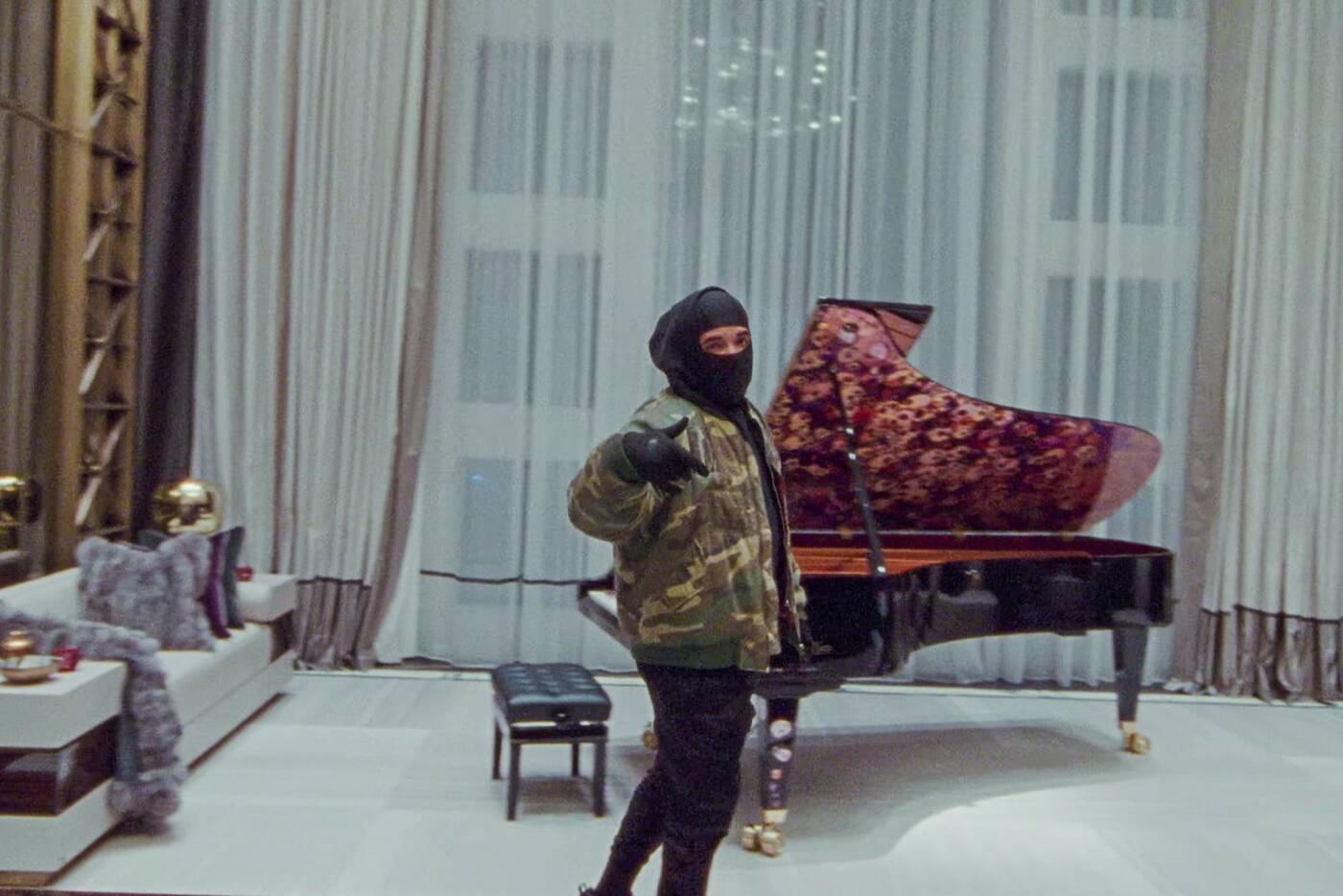 After his dance, the artist walks through a door into an all-marble-everything kitchen with plush banquet seating and conspicuously-placed Nike shoebox. 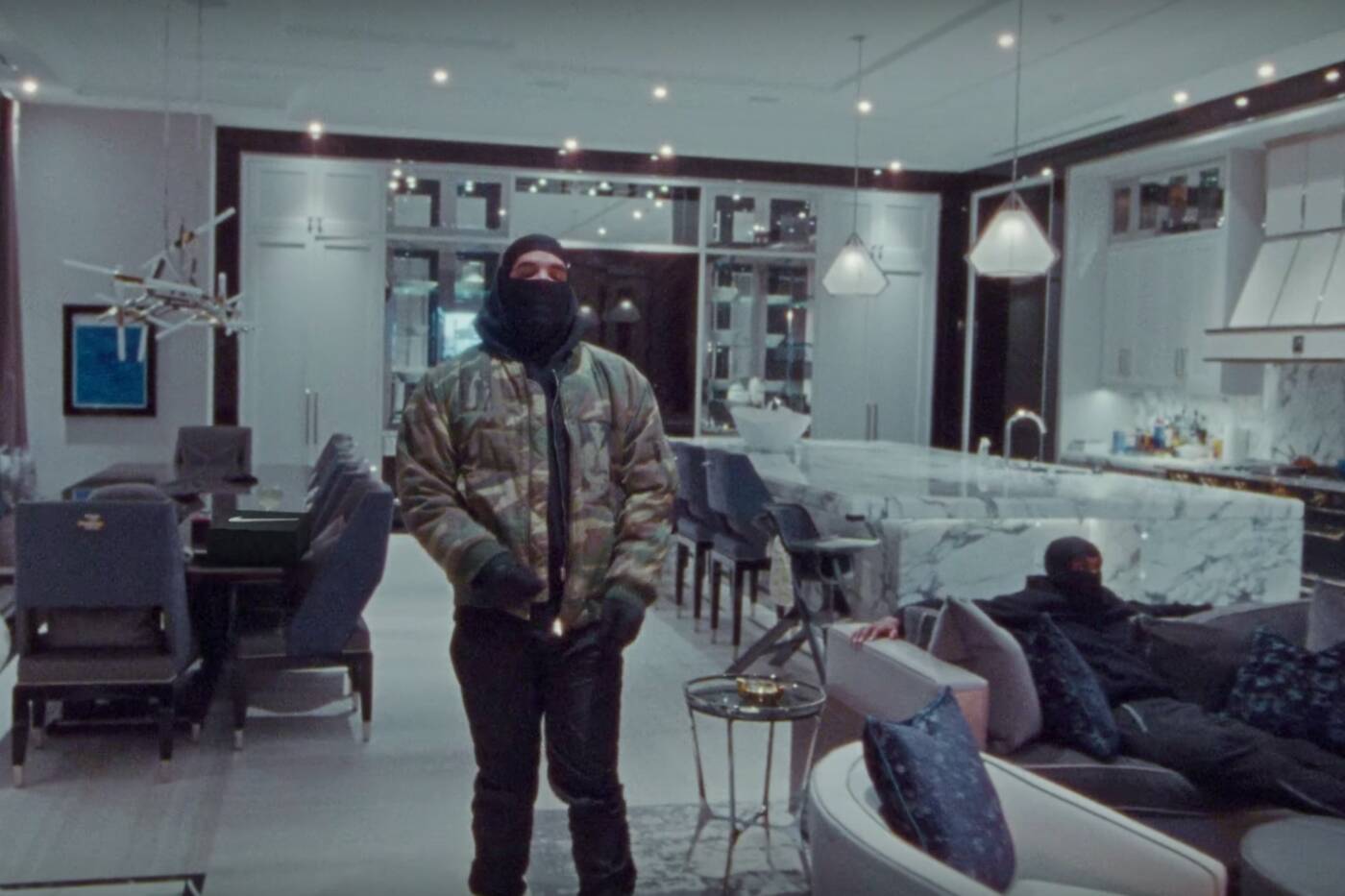 As Drake puts his black leather glove to the camera, we're instantly transported into a dark room lit with blue lights.

Drake raps there surrounded by portraits of music moguls Snoop Dogg, Prince, Lil' Wayne, Diddy and, of course, himself. 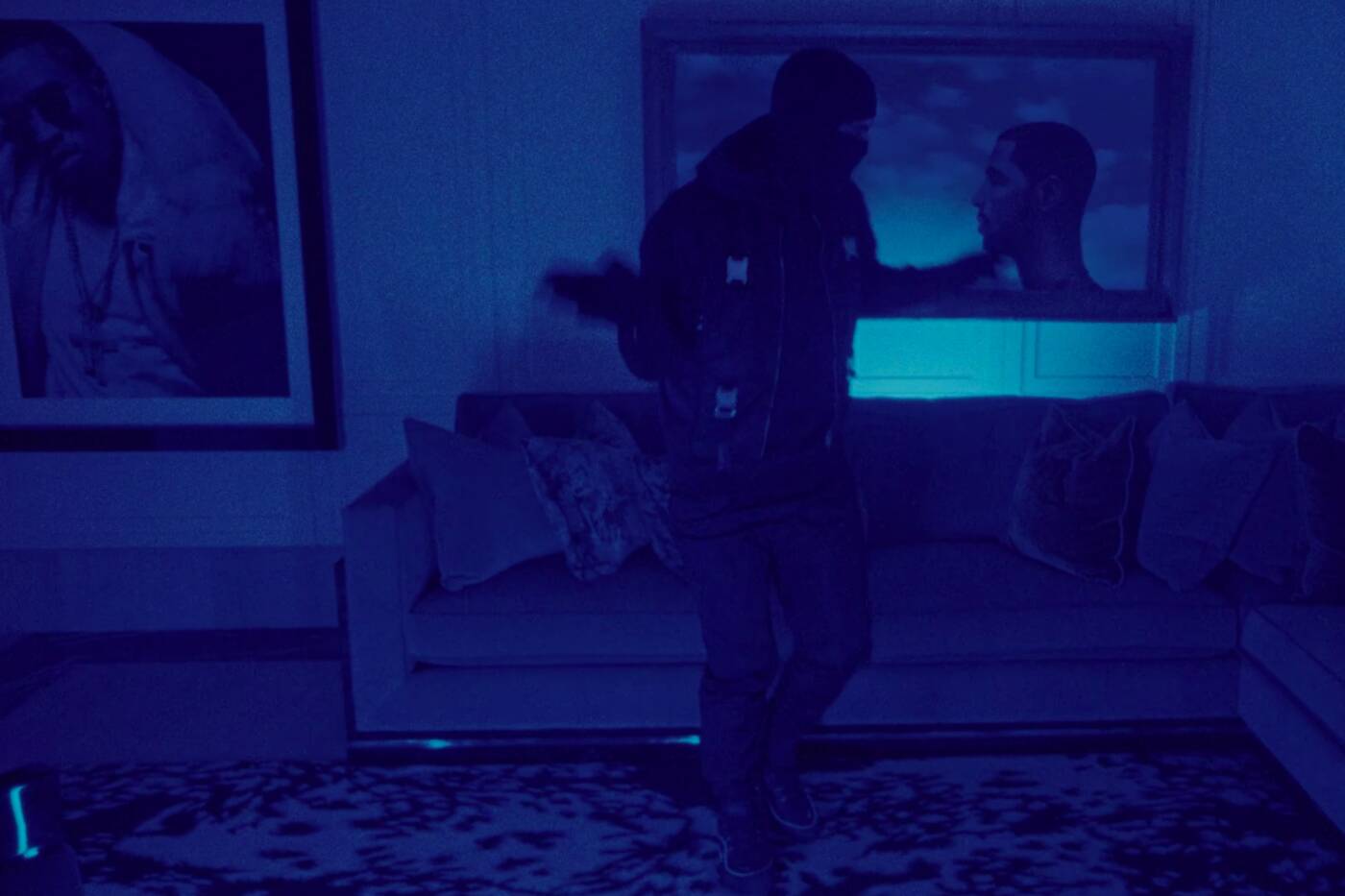 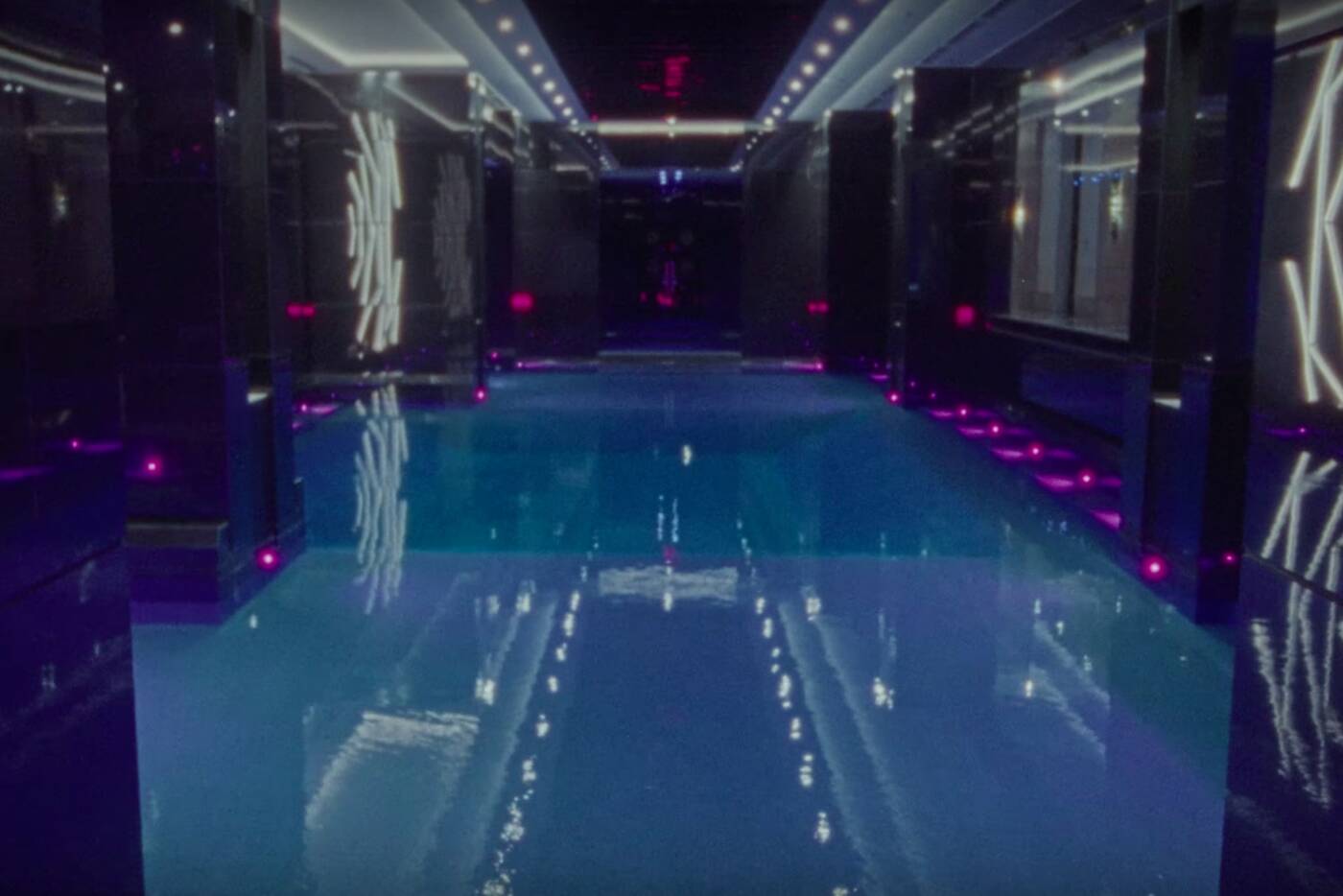 The superstar eventually makes his way outdoors into his sprawling courtyard, which also has a pool. There, he dances and sings as a firework show pops off behind him. 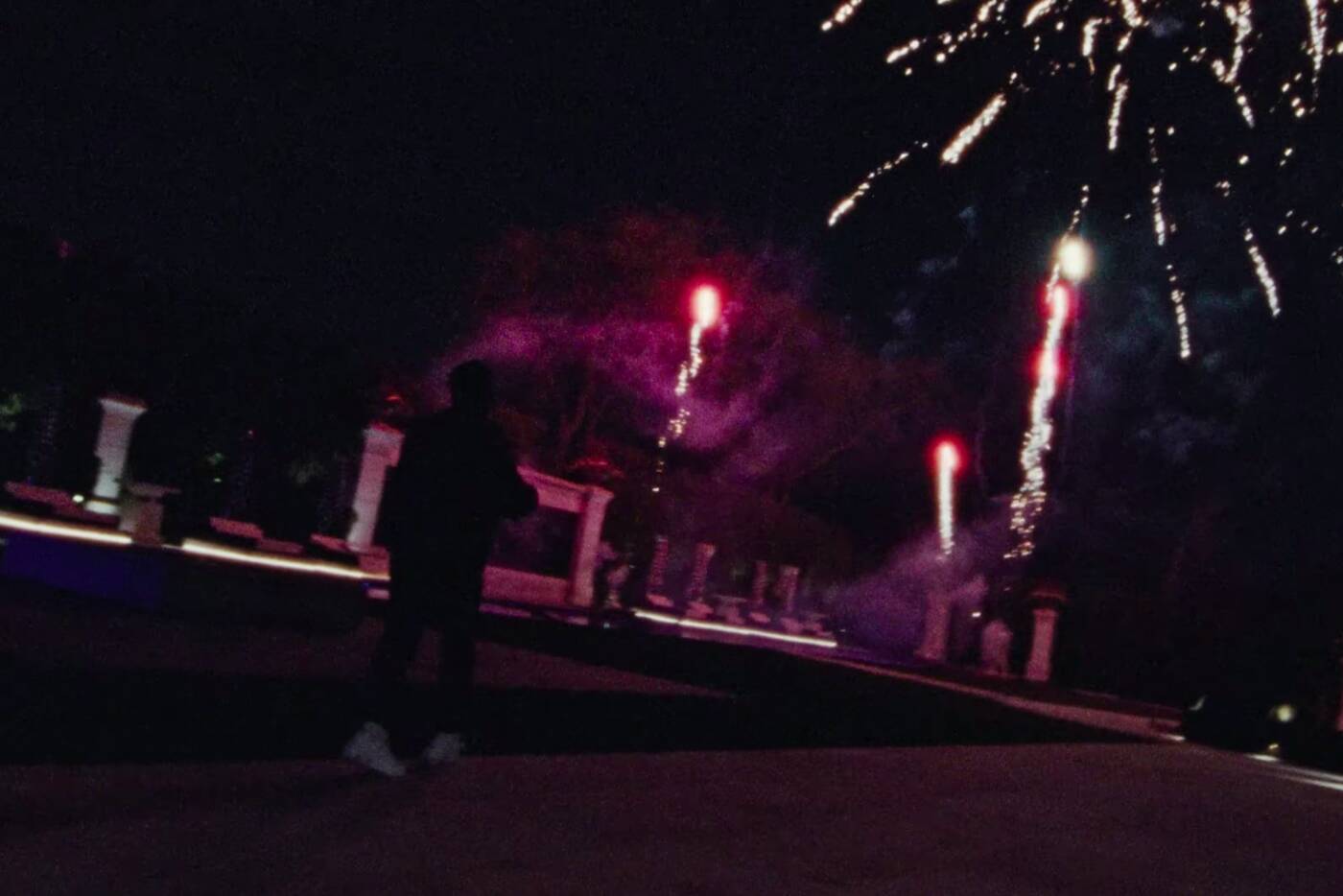 One final parting shot shows Drake's mansion as a whole from above with fireworks shooting out from behind it.

"We definitely cannot run that," jokes someone behind the camera as fireworks light up the night sky. 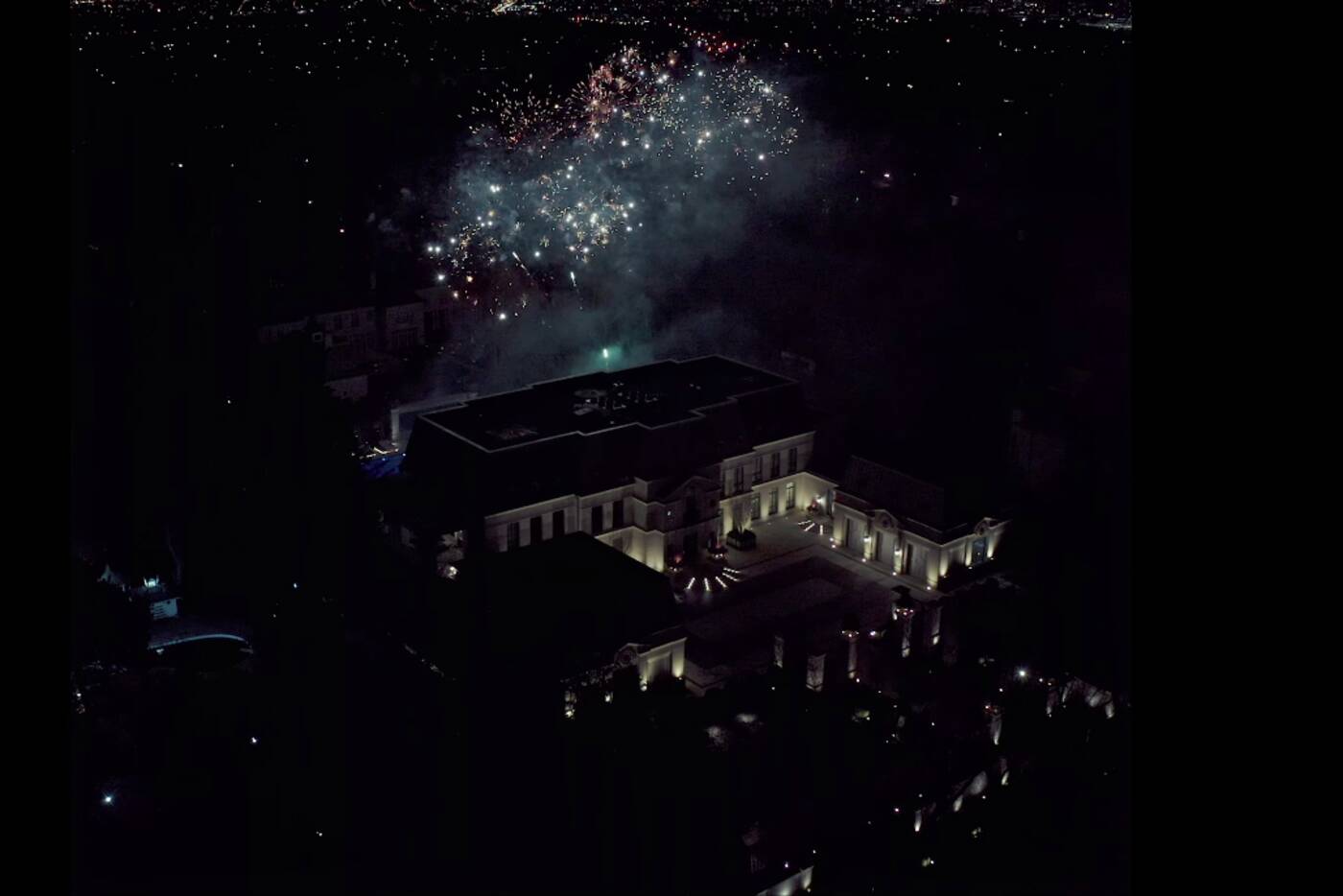 Like the video accompanying Drake's single "War," released on Christmas eve, this one was directed by Theo Skudra.

Unlike the chalet-set "War" video, there are no controversial surprise cameos — just a whole lot of luxury living space with sporadic swoosh logos throughout.