Goth culture isn't what it used to be in Toronto. The Velvet Underground, a last connection to the old scene, has joined a long list of defunct haunts that used to house the makeup heavy scene. The 1990s, on the other hand, were the heyday of Goth culture in Toronto. And while most of the places goths called home have been wiped out over time, the memories aren't so distant.

Here are 10 telltale signs you were a goth in Toronto in the 1990s.

1. You walked the area of Little Gotham (Queen St. west of Spadina) as if it were a small home town within the city just for you and your friends and occasionally headed east of Spadina to hang out at Driftwood to buy new and used CDs from all of your favourite bands.

2. You saved up your money so you could be ensconced in velvet clothing, courtesy of Goth Super Stores, Fashion Crimes, and Siren. When you couldn't wait, or afford those stores, you'd walk east along Queen Street for a mediocre substitution care of Le Chateau.

3. If you were underage in the 90s you could be seen touching the ground and touching the sky at all of the different "Freak Show" locations (Richmond St. West and Spadina), popping up across the city and of course, the Catacombs on Queen Street. On weekdays you'd attend goth nights at Savage Garden, where ID wasn't usually an issue because of so much makeup and Manic Panic hair dye.

4. You'd hang out Ilyich's neo-communist themed "underground" bar behind Future Bakery. When it became Labyrinth Lounge you hung out there on Monday nights for the open mic and poetry readings. 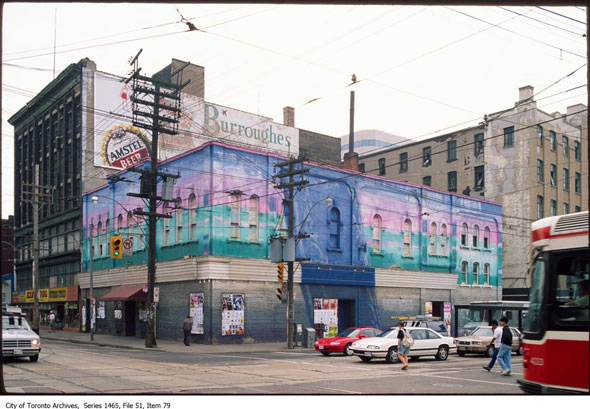 5. It breaks your heart that Sanctuary The Vampire Sex Bar is now a Starbucks, Funhaus is a Shoppers Drug Mart and the Big Bop is a CB2 (Although at least you know where you can purchase jumbo pillar candles).

7. You couldn't wait to see the movie Blood and Donuts - a vampire movie that was filmed and set in Toronto, when it came out in 1995.

8. One of your daytime outdoorsy haunts was hosting a picnic at Mount Pleasant Cemetery.

10. You purchased all of your incense from cool stores in Kensington Market, like Courage My Love, until you realized you could get the same scents for a quarter of the price at Honest Eds.

What did I miss? Add your black-tinted memories in the comments.