Canadian Music Week 2015 is a wrap. And not a minute too soon. We subjected our overactive ears to more than a week of abuse, and that constant ringing I hear is my internal alarm system letting me know I could definitely use a break.

Personal fatigue aside, the 2015 edition of CMW was not without its own small problems. Overzealous doormen and ridiculous lineups were a frustration that only stellar performances could overcome. Key sets by festival-vets Metz and legends Jesus and the Mary Chain were accompanied by discoveries like Fat White Family, Twin Peaks, and together PANGEA.

With so much to choose from (1000 bands over 10 days), any given recap is bound to be varied and to overlook some shows. That said, there were some obvious favourites that would likely make anyone's best of the fest list.

Here are our picks of the top shows from an action-packed week at CMW. 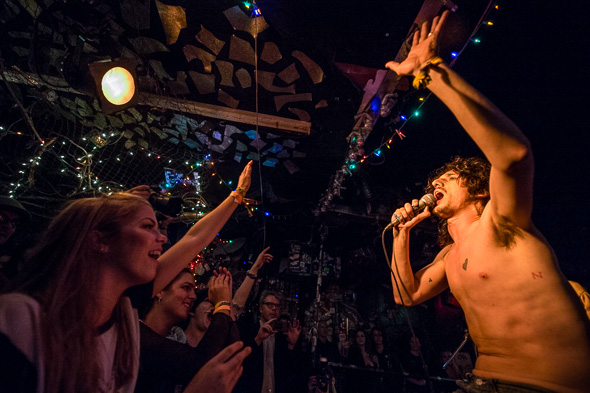 Fat White Family, Thursday May 7, Bovine Sex Club
The biggest surprise of the festival. Having never heard of them, I really had no idea what to expect from a band with a name like this. Luckily, their Syd Barrett-fronted carnival rave-ups were the perfect pick-me-up for 2am in the morning. 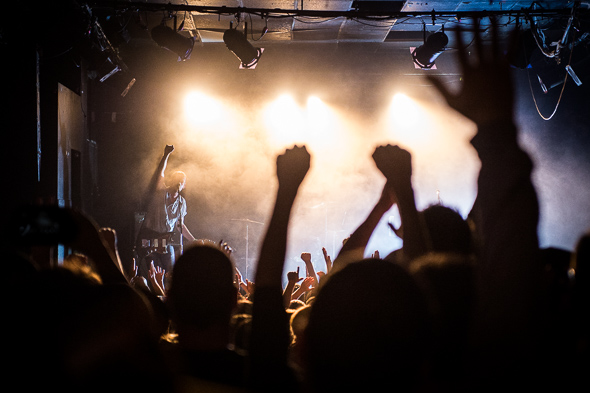 Metz, Friday May 1, Lee's Palace
I have to go on record to say that Metz are easily one of the best live acts I've ever laid my ears on. Nevermind the fact that they're a sight to behold as well. Sensory overload. And their new album Metz II kicks the polite right out of me. 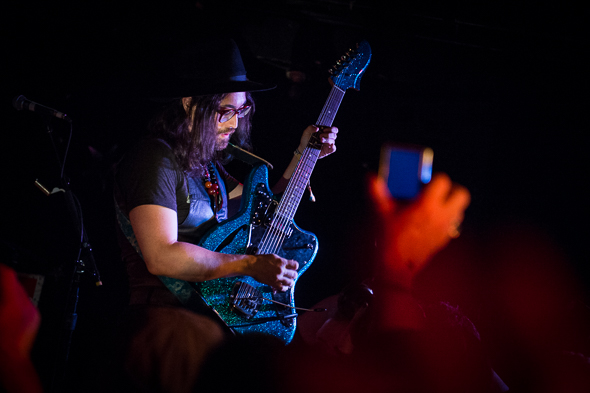 GOASTT, Friday May 8, The Horseshoe Tavern
Someone asked me who was the last great guitar player I saw. It was Prince but that was before Friday night. I really had no idea that Sean Lennon was that good a guitar player. With his obvious pedigree you might expect some kind of Liverpudlian throwback, but certainly not the face-melting psychedelia we were treated to. 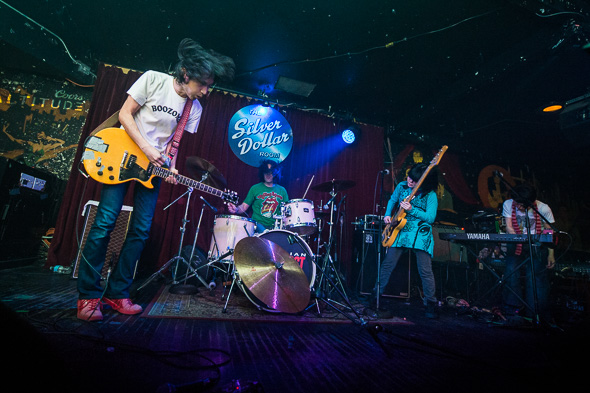 Zoobombs, Saturday May 2, The Silver Dollar Room
"We love toronto. We not depressed," guitarist Don Matsuo says gleefully in his broken English. Though some nuance gets lost in translation, it's easy to see that this Japanese quartet love our city. They've become a perennial mainstay at the Silver Dollar every fest.

Joey Badass, Saturday May 9, The Danforth Music Hall
New York is in the blood. That's a popular myth that's certainly hard to dismiss after seeing Joey Badass tear up The Danforth Music Hall. Sounding like a direct descendent of A Tribe Called Quest, Nas, and MF Doom, he does a great job of paying homage to his forefathers while sounding wholly original. 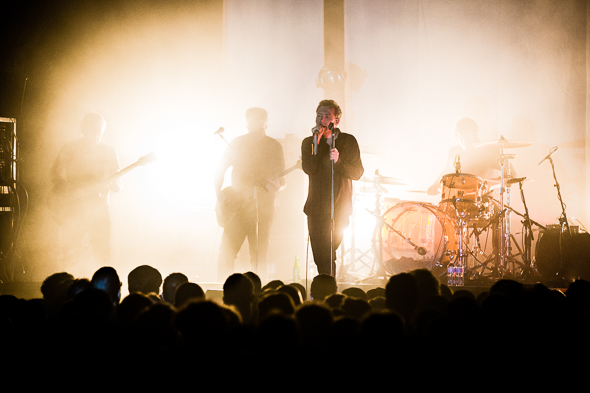 The Jesus and Mary Chain, Friday May 1, The Phoenix Concert Theatre
The celebration of the thirtieth anniversary of the band's seminal album, Psychocandy, was kicked off in spectacular fashion. Just how special was this night? Creation records magnate and Mary Chain champion, Alan McGee, was in attendance. 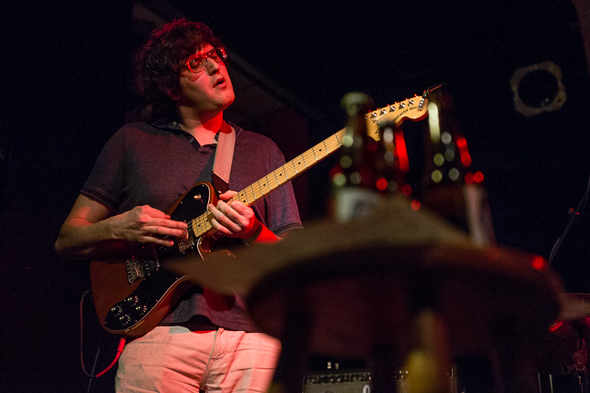 Protomartyr, Friday May 1, Lee's Palace
Have you ever asked yourself what it would be like if Rodney Dangerfield fronted a post-punk band? Your answer comes direct to you from the motor city, it's wearing a suit jacket and is something truly worthy of your respect. 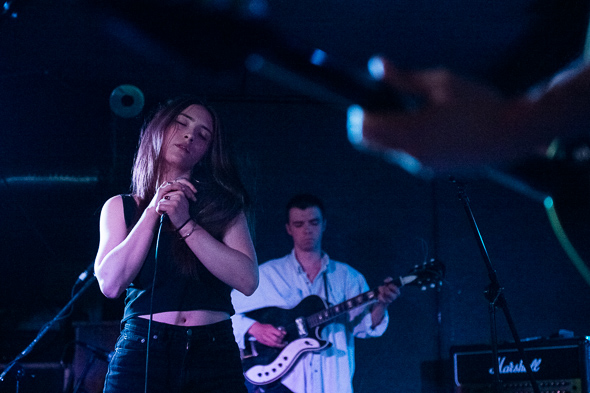 Dirty Frigs, Tuesday May 5, The Garrison
I can't think of a band that's more appropriately named. As sweaty and intense as the action they suggest, Dirty Frigs are certainly not vulgar. But they make you feel that funny feeling deep in the pit of your stomach. You just know this is leading somewhere. 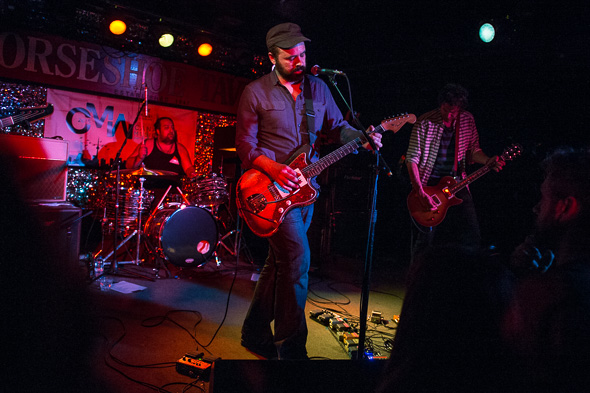 Swervedriver, Wednesday May 6, The Horseshoe Tavern
I think the capacity crowd at the Horseshoe knew just how criminally under-valued this band is. Not the name on everyone's list when the shoegaze revival inevitably gets mentioned year after year, Swervedriver remain the juggernaut that kept the movement's airy ambitions grounded in rock n' roll ethos.

The Psychedelic Furs, Saturday May 9, The Phoenix Concert Theatre
Who said that time travel was impossible? Molly Ringwald's favorite cheerleaders propelled The Phoenix Concert Theatre back in time where it apparently functioned as the high school gymnasium from Shermer High School (The Breakfast Club). Singer Richard Butler's voice has been remarkably preserved as he sounded every bit as vital as when he released President Gas in 1982. 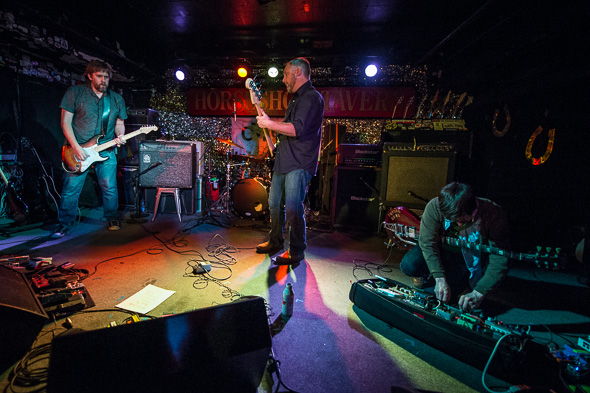 Sianspheric, Wednesday May 6, The Horseshoe Tavern
Having remained relatively low key for the past 12 years, Hamilton's sianSPHERIC hit back huge with their trippy take on indie drone. Bolstered by the guitar onslaught of Sean Ramsay and pedal wizardry of Ryan Ferguson, what comes next is bound to be pretty spectacular. 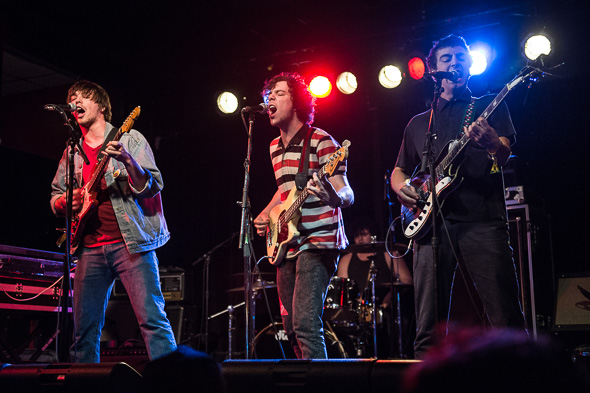 Twin Peaks, Thursday May 7, Lee's Palace
"Can you bring the crowd up in the monitors? 'Cos this crowd is weak," bassist Jack Dollan says, doing nothing to hide his contempt. The arrogance of youth is the river that runs through this band, using playful banter to antagonize. Luckily, they pushed all the right buttons. 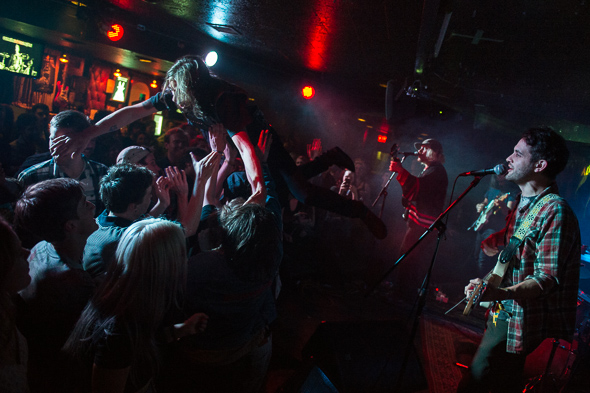 Jazz Cartier, Saturday May 9, The Danforth Music Hall
If there was an award for "Most Enthusiatic," Jazz Cartier would have taken it--hands down. The rapper utilized every inch of the stage, lighting up the crowd with his boundless energy. It's no wonder he's the MC on every one's buzz list.

Cloud Nothings, Saturday May 9, Lee's Palace
When I first saw Cloud Nothings a few years back they struck me as incredibly na誰ve rising-blog stars. They had none of the worldliness that comes from years on the road. As expected, that has changed and their set has gained that extra bite to make their angst that much more believable.

What did we miss? Add your favourite CMW shows in the comments.

With contributions and photos from Matt Forsythe