Will Toronto ever truly be a "Music City"?

Mike Tanner has been Toronto's Music Sector Development Officer for about six months, and some in the city's music community are getting fidgety. What does this official do?

As a follow up to February's Music Moment panel hosted by Wavelength, on Saturday, April 25th, Tanner took part in a Town Hall Meeting at the Garrison, and for the first time the public were given a span of nearly two hours to ask questions of him and discuss the state of music in Toronto.

Two hours sounds like a huge span of time, but it flew by and, as discussion meandered for better or worse, the actual identity and purpose of both Tanner's title and the city's initiatives to grow our music sector remained a little hazy.

Here's what I learned while chatting with Tanner prior to Saturday's public meeting. 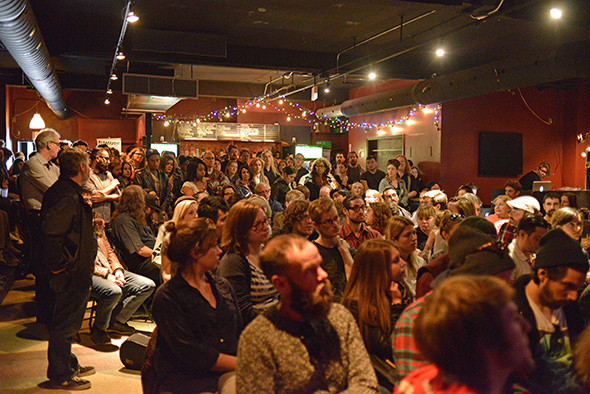 What does the term "music industry" mean to city hall?

Tanner himself uses the term "industry" in a way some may find jarring. "To me industry incorporates everything," he explains. "Sometimes I'll mention artists as separate from industry because I think all of these discussions really need to begin and end with musicians, but when I say industry, I include musicians in that."

"We always have to keep the interests of musicians first and foremost in all of this [but] maybe we should have another word," he continues. "We're [also] talking about small venue promoters, individual artists, someone who runs a little record company with three artists on it."

Tanner is adamant that there's an understanding at city hall that a healthy music scene's interests don't only lie with big business, but with grassroots organizations. "It's not just about numbers, data, or dollars you're generating - there is a recognition in the city, and there always has been, that music is a hugely important part of our social fabric."

Tanner later admits that "music community" might be a more fitting term than industry. It's a fine line to walk - I see his utopic vision of Toronto's music industry as unilateral from top to bottom - an "ecosystem," to use another of his terms - but I also question if it inherently minimizes noncommercial arts enterprises. Take it as you will. 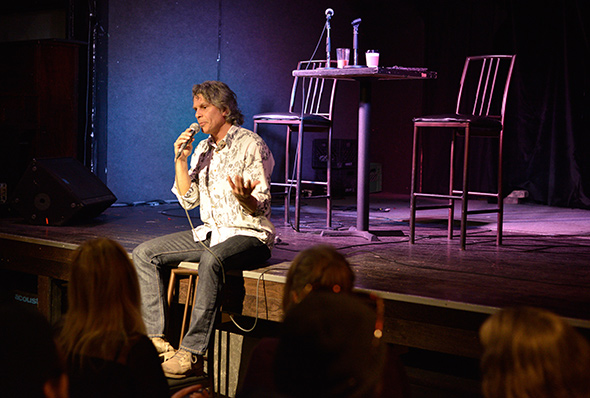 So what does the Music Sector Development Officer do?

Tanner's position is a part of Toronto's Film and Entertainment Office - in fact his desk shares a room with the Film Sector Development Officer's.

As anyone who's had to deal with a film production taking full control of their street can attest, film has made leaps and bounds in establishing their interests as Toronto's interests. Now, it seems, it's music's turn.

Tanner, who amassed a wealth of music contacts as director of operations for music festival NXNE prior to this new gig, tells me most of his job can be summarized fairly simply. He's in place to open doors within the city's music community.

No, he can't sign you a check to go on tour. But maybe he can find someone who will.

"The biggest change between working on behalf of one event [NXNE] and what I'm doing now is working on behalf of the whole music community in Toronto - everybody from artists to festival organizers to people who have ideas for things, and looking to see how I can, along with the Film and Entertainment Industry folks on my team, be of assistance."

For example, Tanner has been working to sort out zoning issues affecting the Geary Avenue music scene. So far, he's managed to help Geary Lane, feared shuttered for good by bylaw and zoning issues, secure the necessary temporary permits for its inaugural Sounds SĂŠance Festival. 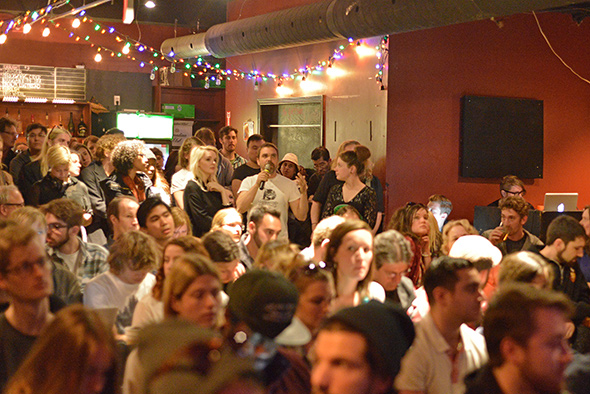 What is the deal with the Austin-Toronto alliance?

Tanner made his 10th trip or so to SXSW this March, but, as one would expect, he describes this year's trip as "different" -- and not just because the festival shrunk in size.

"There was a lot of organization and work with industry partners to set up the events and showcases... [we] brought together a lot of industry folks, including Mayor Tory, Councillor Thompson, and Councillor Cole."

As to Tory's "cutting the red tape" comment, Tanner explains the the mayor's office is interested in "streamlining processes wherever possible."

"We find out what's happening on the industry side; what processes are slowing things down, and make recommendations... to the relevant city departments," he explains. Tanner says this is similar to how the film office began to function about 25 years ago.

"It's not 'let's create SXSW in its duplicate form,' it's about - [looking] at what kinds of things a music industry can do when it is enabled and empowered, with the proper checks and balances in place." He sites an idea as simple as Austin's having loading zones outside of venues for musicians.

Aside from idea sharing, initiatives thus far have included artist exchanges, cross-promotion, and the pre-planning stages of a fall music industry summit in Toronto.

Tanner claims any musicians can benefit from the alliance - if a small Toronto band is on tour in Austin, they should be able to use the connections the alliance has built for helping to secure more gigs in Austin and/or media coverage and radio appearances. 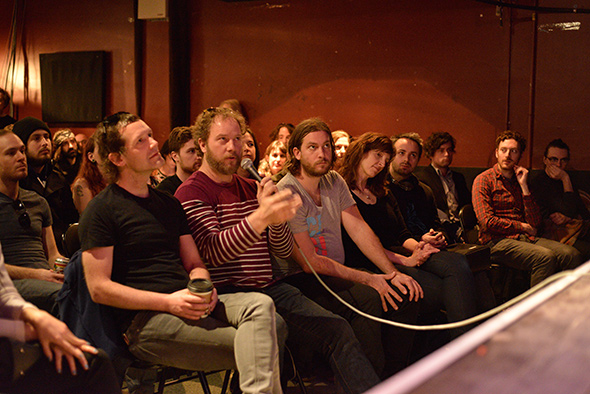 How does the Toronto Music Advisory Council work?

The Toronto Music Advisory Council is in its infancy: newly re-approved in light of the fall election, their first meeting date is yet to be announced.

Four public meetings each year will be administered by the city clerk's office, who will publish an agenda for the meeting online for the public five days before the meeting date.

Anyone can register online to speak about an item on the agenda, and audience members in attendance can ask questions, so long as they pertain to the agenda. The first meeting will likely take place this spring. 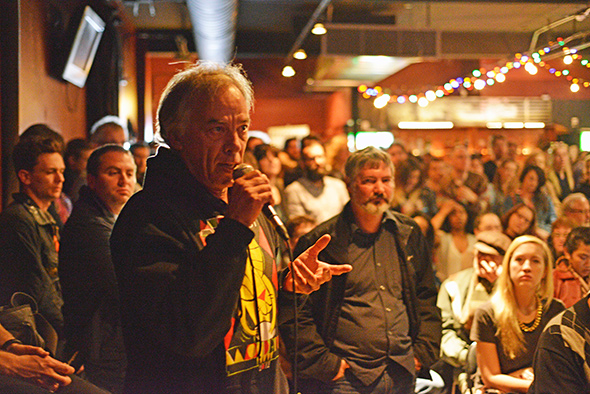 What are the goals of Toronto's new music office(r)?

Tanner is currently working on objectives that came out of Mayor Tory's trip to Austin including an examination of the way venues are licensed. "[We are] trying to find some information and clarity both internally at city hall and externally."

Tanner tells me he spends a lot of time in meetings, in part to amass information and make internal contacts that can help the music industry, where he says he already has a vast network.

Tanner's seven years with NXNE, he tells me, gave him a decent idea of how the city works and supports music, and he also got to know a lot of "folks" around town.

I ask Tanner what he's doing to connect with sectors of Toronto's music community (/industry) that lie far beyond his radar thus far. Tanner readily admits that accessibility is a challenge for interests that are, or feel like, outliers.

"That's partly why we do things like participate in panels and discussions [like April 25th's Town Hall Meeting] and make ourselves visible, so more people can find out what we do, who we are, how to reach us, what services and connections we can provide, and how we can help."

"It's no good having a film and entertainment industries team if nobody knows how to get a hold of us." 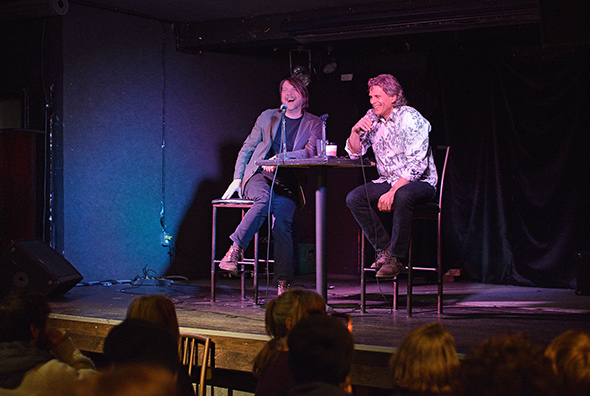 It's clear that, on paper at least, Tanner is in place to help anyone, from big business to niche music communities struggling to get by. How this works will, it seems, depend on who reaches out.

I ask Tanner for his thoughts on the city's spaces for emerging talent, which so often include spaces with complicated relationships to zoning bylaws.

"I would hope that DIY doesn't mean you're breaking the rules." Tanner points out right away.

"To me, DIY means the real grassroots, the part of the musical ecosystem which you need to be healthy in order for the whole system to be healthy... Emerging artists, young people, genres that don't have a lot of outlets, little labels - it all needs to flourish because without it, things ossify and you don't have a scene anymore."

Tanner hopes the city's plans to streamline "red tape stuff" will trickle down from large established interests to "someone trying to do something in a very lo-fi kind of a way."

"I would hope that we can work at finding ways to integrate these things so you don't get the sense that smaller operators are feeling that they have to go rogue or work outside the system."

He adds that community interests are just as important, meaning no one at city hall is planning to send noise complaints straight to the shredder under the "Music City" banner.

"This is part of the discussion of what it means to be a music city - it means encouraging music at all ends of the spectrum, but it also means you're being sensitive to what's happening all around you in neighbourhoods."

Tanner stresses that understanding and communication in relation to zoning and licensing is a priority. He sites Geary Avenue as an example of a community that's hit roadblocks due at least in part to unnecessary miscommunications. 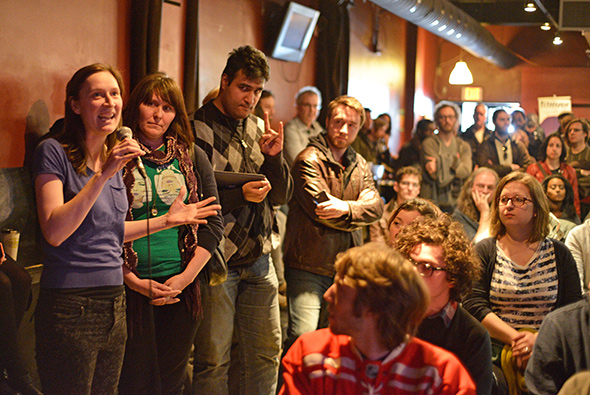 How can Torontonians get involved?

Tanner has been impressed with Toronto's music scene thus far. "I don't know how apparent this is to everybody, but I actually see our music industry... maybe I'll use the word community, as a pretty helpful bunch."

"Of course there are rivalries - business to business competitions, people who want to keep things private for good reasons" - [one can't help but think of NXNE circa 2014] - "but overall I think the music community in Toronto is one that looks out for each other."

He adds that "city folks" should be included as being enthusiastic to help wherever possible.

"Honestly, I believe the city is committed to helping grow and support the music sector - the music community - across the board."

Tanner says he tries to answer every email and phone call as quickly as he can. "I hate being that guy who lets an email sit in his inbox for two weeks, and sometimes I am that guy," he confesses.

He advises that those writing to him strive for clarity. "The more focused and tangible the email is, the easier it is for me to process it quickly."

Most of all Tanner stresses his position as a conduit - or, perhaps, walking lightning rod - for members of the music industry to access city hall, and, as has become more and more apparent to him, for linking for music interests external to city hall with each other.

While he can't grant anyone a musician's salary, it's clear that Tanner's position at City Hall, while loosely defined in his role as conduit, is and will always be malleable.

With some success already on Geary Avenue and, as Tanner is quick to enthuse, a new reggae night at the Tranzac, one can't help but catch some of Tanner's optimism. As for No Fun Toronto's days being numbered, it will be a long road ahead.

Listen to the full recording of the Toronto Music City Town Hall meeting here thanks to TRP.