NXNE has been quietly waiting to destroy the increasing summer festival competition with their lineup, which is kind of curious given that they've booked Action Bronson, Real Estate, the 2015 New Pornographers, and 2015 Best Coast. A Place to Bury Strangers playing in Toronto, imagine that.

Also playing are Tink, Ty Dolla $ign, Om, Zola Jesus, Betty Who, and Vince Staples. Predictable with a few intrigues - this is NXNE doing what NXNE does: bringing the Pitchfork blog roll to a wide (but decreased in 2015) range of Toronto stages from Yonge-Dundas Square to the Rivoli.

Blonde Redhead and Angel Olsen are always welcome along with familiar names from Majical Cloudz to Iceage, No Joy, and White Lung. Then there's Pentagram. To the credit of this year's roster, when I was promised loud I would have taken anything over Billy Talent. The Alice Glass DJ set promises a crowd of Toronto nu-goth insiders flaunting their stage access.

Aside from Glass, Toronto acts include Odonis Odonis again, Dilly Dally, Anamai, and, soon, a bunch of your friends who won't have any guest list spots allotted to them, sorry. It remains to be seen if this year's changes to the NXNE administration will lead to changes in the way they interact with the local scene, but at least there's no radius clause.

Check out the full lineup (as it stands now) below. 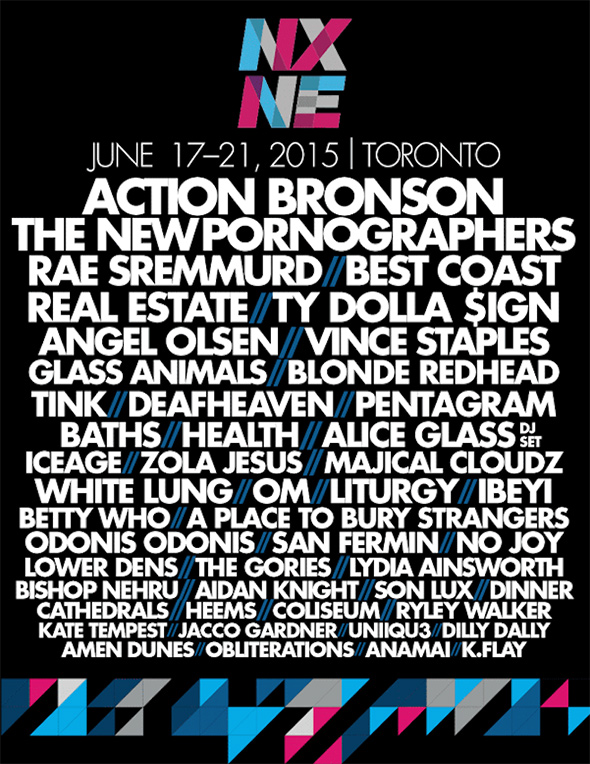