A brief history of queer music in Toronto

Toronto's longstanding reputation as an uptight puritan town often overshadows our vibrant underground queer history. After all, how else would our massive Pride celebrations easily dwarf San Francisco's, if there weren't such a strong local queer community? Not surprisingly, evidence of that defiantly homo undercurrent has long run through Toronto's music scene, even if it wasn't always immediately recognized.

Toronto's earliest well known out musician was Jackie Shane, a talented R&B singer who'd relocated from Nashville to become one of the biggest names on the raucous 1960s Yonge Street strip. Shane attracted a lot of attention for his androgynous style, often wearing full makeup, sequins, and gloriously big hair. While this kind of flamboyance wasn't generally accepted, being an exceptionally charismatic entertainer seemed to allow Shane to get away with it.

He even had a local radio hit in 1963, when his version of "Any Other Way" reached number two on the CHUM chart. While most radio listeners likely didn't catch the way he twisted the meaning of the line "tell that I'm happy, tell her that I'm gay," anyone who caught him playing live would have quickly picked up on the subtext. Shane disappeared before his career could really take off, but in more recent years his recordings have been rediscovered by a new generation of soul music fans.

It wasn't long after Jackie Shane first pushed up against Toronto's homophobia that Carole Pope and Kevan Staples began testing the sexual boundaries even more. Performing under various names starting in 1968, in 1975 they finally settled on their most well known moniker: Rough Trade. If their name wasn't enough of a hint, Pope's habit of performing in bondage gear made their queerness more explicit, not to mention the lascivious lyrical content.

Before they became famous for their 1981 hit "High School Confidential," Rough Trade had already made queer culture integral to their image by putting on a musical called Restless Underwear with the legendary drag queen Divine.

Nevertheless, that didn't stop the song from blowing up, even if some meeker radio stations insisted on censoring that infamous "she makes me cream my jeans when she walks my way" line. The band faced similar issues over the descriptions of a gay male couple in the song "Crimes Of Passion," but there was no way to make the band straight just by removing a few lines.

Rough Trade's impact on other musicians was as important as the effect they had on fans. Their controversial 1982 performance at the Juno Awards (in which Pope sang the 'cream' lyric against the wishes of the organizers) helped inspire k.d. lang to come out of the closet, and they've been covered by pre-Peaches Merrill Nisker, Lesbians On Ecstasy, and even Dusty Springfield (who briefly dated Pope).

The '80s Queen West new wave scene was a hotbed of queerness in general, as was the early punk scene. That burgeoning activist mentality was unexpectedly thrust into mainstream when Parachute Club's 1983 equal rights anthem "Rise Up" became a huge pop hit.

It's obvious, however, that many missed the subtext behind lines like "we want freedom to love who we please," which was a reference to the infamous 1981 gay bathhouse raids that sparked Toronto's early gay rights protests. When McCain tried to use the song for a for a frozen pizza commercial, the band successfully sued to regain control of their material, although that wouldn't stop Canada's right wing from attempting to misappropriate the gay rights song during the 1999 United Alternative convention to bring together the Reform Party and the Progressive Conservatives.

The 80s also saw the a cappella group the Nylons moving from the afterhours scene to the pop charts, despite the unlikely selling point of the concept of the band: a gay barbershop quartet. Apparently some US versions of their debut album removed the line about "discos and gay cabarets" from the song "The Kind Of Man," so at least some in the music industry were concerned about potential controversy.

Over the years the band has had straight members as well, but their strong links to the gay community have never been hidden.

Far away from the pop charts and commercial radio, Toronto's post-punk scene was also becoming more outspokenly homo. Fifth Column had few contemporaries in 1982 when they began recording their fiercely feminist and queer-positive experimental punk songs, and they've since been credited with inspiring and helping kickstart both the queercore and riot grrrl movements.

Their song The Fairview Mall Story documented the police harassment of men cruising washrooms in the St. Catharines mall, and Kathleen Hanna has said she thought they were a much better band than Bikini Kill. The fanzine J.D.'s that they ran with Bruce La Bruce also helped create a visual record of what would later become queercore.

The beginnings of the underground house scene was also a fertile breeding ground for queer culture '80s Toronto. While legendary after hours club the Twilight Zone wasn't officially a gay club, it attracted such a diverse crowd that many saw it that way.

Of course it also helped that the bouncers would tell groups of rowdy bros that it was a gay party to help scare away the types of dudes who couldn't handle partying with queers. Industry Nightclub continued that tradition of mixed sexuality crowds when it ruled the after hours scene in the late 90s.

The gay party scene also had a big impact on the rock world, mostly through the influence of Will Munro's innovative queer punk dance party Vazaleen, as well as the many other quirky parties he ran until brain cancer cut his life far too short in 2010. While not a musician himself, the influence he had on the larger music scene of Toronto was immense, and brought a queer consciousness to even the straightest corners of the indie and punk scenes.

Vazaleen helped nurture a whole generation of gay musicians. Acts like the Hidden Cameras found a ready audience for their concept of "gay church music." Peaches found her most receptive early local audiences within that scene, even if many years later music journalists are still inexplicably surprised to find out that she's got a big queer following.

You'd think collaborating on a song called "Lesbians In The Forest" with Carole Pope might have made it obvious.

Synth pop band Austra came up after Vazaleen's height of popularity, but Katie Stelmanis made it clear how much impact the monthly party had on her in their early song Young And Gay, which was dedicated to Munro. While she and several members of her band have long been out and proud, she's expressed disappointment that their queerness has often been omitted from the narrative by journalists.

Similarly, Owen Pallett has also talked about his feelings of being othered for his sexuality by hetero music critics. As the go-to guy for string arrangements in indie music and as a touring member of Arcade Fire, he's achieved a visibility that most musicians would be envious of, while also using that platform to spark dialog about queer issues in a community that often sees itself as too progressive to be criticized for subtler forms of discrimination.

As gay culture became mainstream enough to make its way into television series, Toronto musicians often provided the soundtrack. The American version of Queer As Folk featured a theme song performed by Greek Buck, a Toronto duo of Don Pyle (best known for his work with Shadowy Men on a Shadowy Planet, with whom he performed the music for Kids In The Hall) and mixed media artist Andrew Zealley.

The Cliks also provided music on the soundtrack of the L Word, not to mention being the first band with an out transman singer to infiltrate the conventional rock world.

In more recent years it's become increasingly normal for Toronto bands to have openly gay members, and not have that be the defining aspect that gets latched on to. While now-defunct Toronto house music band Azari & III made no secret of their debts to vogueing and early gay house, the mixture of sexualities among their members was always only a minor tangent to their story. 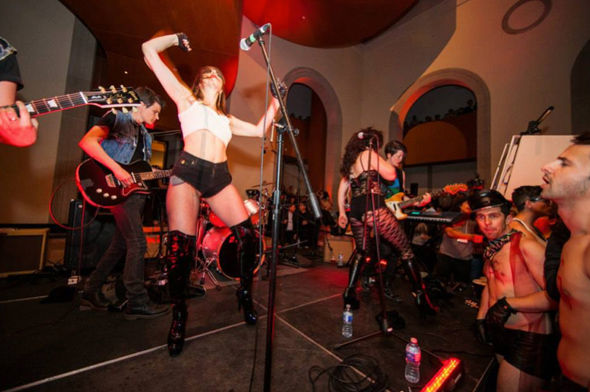 And while the obvious sapphic overtones to Vag Halen's feminist reappropriation of cock rock tropes are an integral part of their concept, they get just as much attention directed at their gender.

It might feel relatively recent that Toronto's music scene has become welcoming to the wider spectrum of sexualities, but that diversity has long been there. Nevertheless, it is a very different social climate now than it was when Jackie Shane was working the Yonge Street strip. Who knows how much further he could have taken his career if he had started it in this era?

Peaches photo by Alejandro Santiago; Vag Halen photo via the AGO