The top concerts in Toronto September 2014

The top concerts in Toronto this September will pit Jad Fair against The Cure, as somewhere two sharpied patches once badly sewn onto a black thrift store dress collide for the second time (that somewhere is a garbage dump in Winnipeg). From the summer's final warm-weather outdoor shows to secretive local reunions to metal gigs in dank, historic dives, there's a lot for a music fan to do this month in Toronto beyond pining over VELD missed connections. 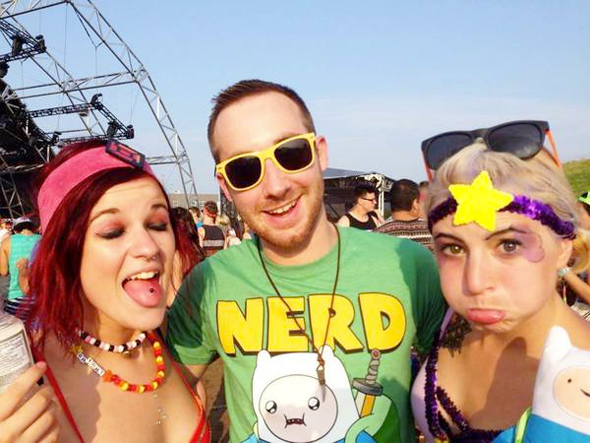 Now onto your VELD missed connections. In first place: Adventure Time girls. "The two awesome girls I met dressed as Flame Princess and Lumpy Space Princess at Veld Music Festival on Sunday. I was wearing a green "Nerd Time" t-shirt with Finn on it and we took a photo together. You guys were were mad awesome and looked amazing. I don't know why I didn't ask at the time but if you get this lets keep in touch!" It sounds like these cartoon fans had a fun, responsible time. Let them be an example.

Then there's shark top, watermelon helmet, black thong, huge tie, and this missed connection for a paramedic. "You were working in the paramedic tent when I got drugged... I had super long hair, with a purple bra and white flower crown. I kept asking you if my makeup was fine." Play safe, kids.

Did you almost get hit by a Go Train after One Direction? Do you remember what song was playing at Pride when you got that number? Are you an Annette Benning look-a-like from Motley Crue? Did you rock out hard at Cherry Beach?

There are no missed connections from OVO, because Drake looks after his fans. Here are September's best upcoming concerts.

Death from Above 1979 pop-up shop / Sept 3-4
Oooo not a concert, it's a pop-up shop with limited edition merch and even more limited free tattoos. What does everyone think of the new Death From Above 1979 songs? I wasn't thinking about them until this poster launched.

2014 TIFF Kick Off Party / Sept 4 / Drake Hotel
TIFF's music programming will always be a flourish at best, a layer icing of one of the world's major film festivals, but this multi-room kick-off is one not to miss. X Ambassadors, Brendan Philip, Harrison, Choir!Choir!Choir!, Bit Funk, Montrilla, Cyclistm TOPS, Prince Innocence (have they figured out their live thing yet? Guessing no), Tasseomancy, and Twist are on the bill.

Riot Fest - Sept 6-7 - Downsview Park
How does a band come to define one's sense of self - is it because we form our identities during the moments of greatest turmoil - moments when we also relied on the emotional support of Robert Smith and Ben Gibbard? Pop music is perhaps our generation's most beloved crutch and illusionary cloak, yet it also acts as an adhesive between us wandering and lonesome generation-whatevers, a rare glue in a craft cabinet containing rows upon rows of decorative ornaments but very little instruments of support. The Cure, Metric, and The National headline.

Wavelength's Island Show / Sept 7 / Artscape Gibraltar Point
Can't afford Riot Fest? This one is free - and instead of nostalgia it's up-and-comers, as is Wavelength's general deal. Weaves headline with Fresh Snow, Most People, MATROX, and more.

Sun Kil Moon / Sept 12 / Opera House
Our editor-in-chief may have it out for Mark Kozelek due to some infamous business at Lee's, but I don't. I'm pretty sure I saw him in Montreal that tour and he was angelic.

Lorde / Sept 12 / Echo Beach
You wrote already all her songs in your diary when you were Lorde's age - but can you prove it?

Jad Fair & Danielson / Sept 6 / Lee's Palace
The most influential living artist in lo-fi? Punk rock's gentlest sweetie-pie? Star of the mockumentary's greatest moment? The penultimate weirdo's soft spot? Jad Fair takes childlike grace in rock and turns it up to 11 with songs about the thing with a hook and getting stuck on a ferris wheel. Girl songs and monster songs, don't you know. The good thing about loving music no one cares about is when a legend comes to town, it's $12.50. He's joined by Normal Blake. I'll be there in my handdrawn patches.

Ought / Sept 19 / Hard Luck
Ought sure come through Toronto a lot. Check out our review here.

Ty Segall / Sept 21 / Danforth
I remember John Dwyer telling me years ago that Ty Segall was amazing. I like this anecdote because in it, I talk to John Dwyer. See what all the garage rockers and lo-fi kids are talking about on the 21st, or read one of our reviews.

Chromeo / Sept 27 / Kool Haus
No he's not the same as Coolio, dad. I don't actually talk to my dad like that.

Photo of Lorde by HitFix