While the Queen Street entrance remains as shady as ever, Nocturne Nightclub has stood the place of one of Toronto's longest lasting goth venues, Savage Garden, for two years now.

Booker Matt Almeida tells us word has been slowly but surely getting out about Nocturne's existence, both in Toronto's goth scene and to music fans in general. The former Big Bop booker and musician is attempting to connect the space's spooky past (costumed events, etc) with the sounds of the present.

Steven Severin of Siouxsie & the Banshees played the club last November, sharing a calendar with crowd pleasers like dubstep and techno nights, as well as art events, and appearances by underground electronic artists like ITAL (USA), who will be at Nocturne next week with Providence's Container and three of my favourite locals: HVY WTR, Petra Glynt, and Roman Kov (High Park). Almeida says his greatest hope is to foster a strong local scene in Toronto.

ITAL, experimental house music with minimal sounds and subtle cultural signifiers, is a new-ish project of Daniel Martin-Mccormick, formerly of noisier, lo-fi acts Sex Worker and Mi Ami. While the music plays with dark elements, ITAL is more MOMA PS1 than Batcave; hardly a typical goth act. As Mansion and FoundryTO are trying (and succeeding) to pull Toronto up to speed with electronic hot spots like Berlin, Almeida is giving the city a needed outlet for musicians who find themselves skirting the fringes of so many genres and sounds that promoters don't know what to do with them.

Almeida let a few more upcoming acts slip during this interview, plus dished on the club's Flaming Absinthe, as boasted on their website. I think a belated welcome is due to Nocturne on behalf of Toronto's fans of house, internet aesthetics, prosthetic fangs, edm, dark wave, lo-fi, video game dance parties, cobwebs - and weirdness in general. 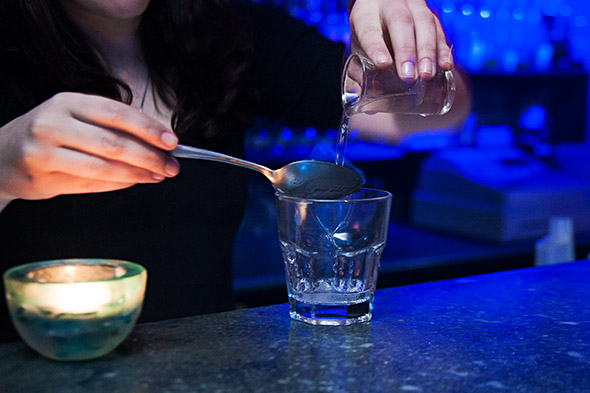 Nocturne used to be Savage Garden, one of Toronto's most beloved goth haunts. How would you say Nocturne Club is different than S.G., and how, if at all, have you kept parts of the old club alive?

At Nocturne we are very much about keeping the history of Queen Street West alive. We are not Savage Garden, and in fact quite a different nightclub experience than Savage, but we do try to keep the goth culture alive: most Saturday nights you can still catch a good goth style event at the club.

What's been going on these past two years behind the scenes to get Nocturne up and running?

We've gone through a lot of different formats of programming, and although many have yet to discover the club we've featured some of the best local and international talent already.

What makes Nocturne special compared to other small Toronto clubs?

I think we take more risks with programming than most. We have had many noise events, we have had book launches and fashion shows. Unlike most venues that stick to one sort of style, Nocturne is constantly doing something different and are not afraid to allow experimental events to happen.

Nocturne hosts on a lot of local parties, but you've also booked international electronic and even experimental acts recently like oOoOO, Glass Teeth, and, soon, ITAL. Would you say Nocturne will keep going in a concert venue sort of direction?

We are working on bringing in more international talent, we do want as many interesting acts in the club as possible, but we will always first and foremost support our local scenes. We make very easy for anyone to walk in off the street and have a chance to host their event. 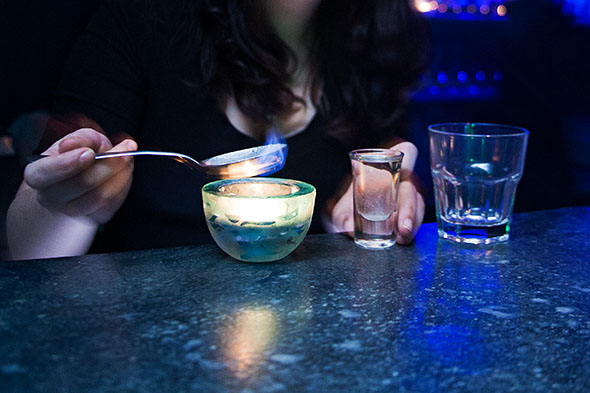 Tell me about the flaming Absinthe...

It's the only single shot of liquor that gives you a warming sense of euphoria.

Is it set on fire? I actually didn't know this was legal.

It's a pretty contained fire and the size of a spoon. When Nocturne first opened we used to light the bar on fire as part of the shot, but let's just say although that isn't illegal, and we were advised not to do anymore and have since stopped.

How did you get involved with Nocturne?

I was booking shows at The Big Bop for years, It was just sort of a natural progression once it shut down to move across the street. We threw our first event which was an art party for Nuit Blanche. We had body painting, turned the front room into an art gallery, and had local artists paint all of the mirrors in black light paint. It was the worst clean up ever washing those mirrors.

The event went so well the venue wanted us to keep throwing shows. Now two years later here we are.

Is there a lot of cross over between old fans of Savage Garden (the club) and people who come to Nocturne now?

There is a little bit of cross-over, but in my experience what we usually get is the odd old Savage clientele saying "Wow, I haven't been in here since it was Savage".

What have been the best moments so far?

I think the night we brought in TOMBA from Tel Aviv to play, followed by an after party we threw in a movie theatre with Crystal Castles. It was one of those legendary nights where we stayed up until the sun-rose and then realized we needed to drive all the way to Montreal.

A close second would be our first "Human Canvas" party. Everyone was half naked and painted up like some sort of weird rave cult. We had a live cellist and bassist on stage playing along to dubstep... it was pretty out of this world. 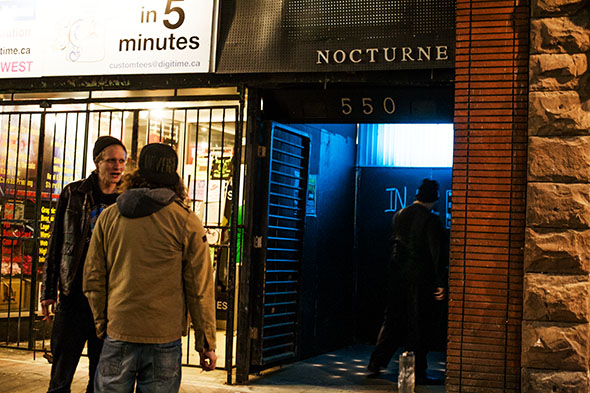 What about the biggest challenges?

I think one of our challenges is shedding the "goth" image. While we still are very supportive of that community we also host great dnb, dubstep, techno and experimental electronica shows.

Are you a musician yourself?

Yes I am a musician myself, and proud to be a Warped Tour alumni (2009), I also have been collaborating with HugsNotDrugs, if you haven't heard about us yet you will be soon.

What's coming up at Nocturne?

Some of the events I am most excited about are White Ring (New York dark wave/witchhouse), Sean Price (New York hiphop), Kings Queer (Anarchist electro punk from France) and more on the way!

What's the best way to get in touch with Nocturne?

We encourage people to just drop by, but if not matt@nocturneclub.com is a good option.