With the fate of Ontario Place seemingly set for a pretty radical facelift, there was one area of the park that already had everything going in its favour on Wednesday night. Echo Beach, Toronto's newest and sandiest concert venue, played host to Louisville's My Morning Jacket and Seattle's Band of Horses, two bands that have spent the last few years honing their material for larger and larger festival crowds.

While neither band necessarily has a breakout hit to their name, you'd have never been able to tell, judging by the masses assembled at the picturesque waterfront venue. Instead, it was each group's solid live reputation - in particular that of My Morning Jacket, whose three-hour plus sets have become things of legend - that brought out a few thousand Toronto fans to what would easily turn out to be one of the summer's best open air shows. 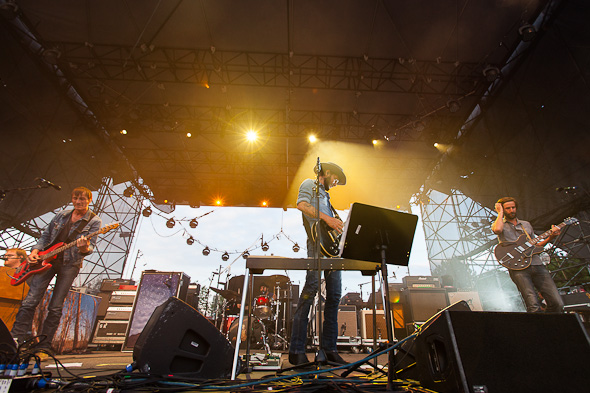 The sun was still high in the sky and the crowd sparse when Band of Horses took the stage promptly at 7:30 p.m., beginning their set unassumingly with the harmonica-laden "For Annabelle." The opening song began with a delicate arpeggio before drums crashed in, the chorus swelling with the CSNY-esque vocal harmonies the band is known for. The subtle start was no worry, though, as the space near the stage filled suddenly with the band's vocal devotees as if teleported from the beer tent, signaling that Band of Horses weren't about to get the typical opener treatment.

With landscape portraits of the desert draped over their amps and frontman Ben Bridwell clad in a jean shirt and wide-brimmed cowboy hat, the band's stage setup looked well-primed for the sunny atmosphere. They clearly came to please, as they marched through an hour-long set full of their most recognizable and upbeat numbers, including a rousing take on "The Great Salt Lake" and an inevitable communal singalong for television-pilfered "The Funeral." 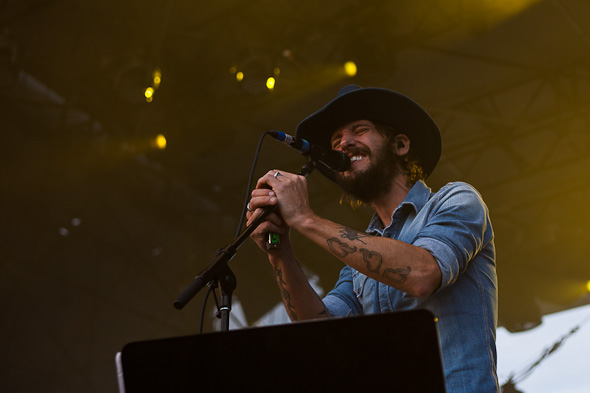 Vocally, Bridwell's register-peaking wail held up impressively well, and was surely audible across the inlet in the parking lot. While their songs follow similar tempos and quiet-loud-quiet dynamics, the set turned out to be perfect for the growing beach crowd. Covering ground from all three of their studio albums, plus a couple previews of next month's Glyn Johns-produced Mirage Rock, Band of Horses set an appropriate tone for the night - breezy, tranquil, but with enough rock action to keep the audience onboard. 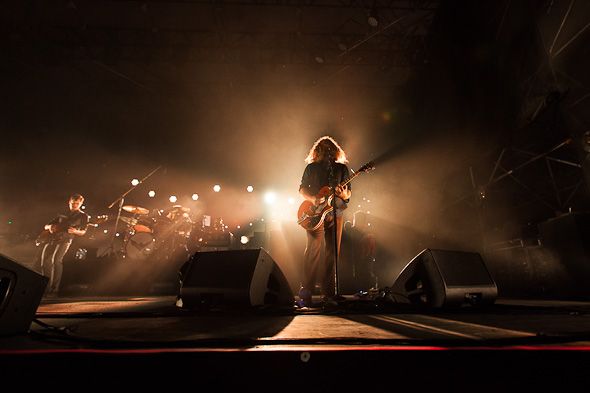 As 9:00 p.m. came and went, I heard a few MMJ aficionados begin to worry that the band would have to trim their set to fit the city's strict 11:00 noise curfew. Though they were only a few minutes behind schedule, this did indeed turn out to be the case - luckily, the show was anything but compromised. Instead, formidably-bearded frontman Jim James and the rest of the band worked within the allotted time constraints to please fans all across the board, making no concessions on their occasionally endless jams but not in lieu of their more direct, brief material.

Over the last few years, My Morning Jacket has established a live reputation up there with the very best in rock and roll. Much like Pearl Jam and others (yup, the Grateful Dead) before them, the band sell and endorse the sharing of bootlegs, and shake up setlists and performances correspondingly to facilitate trade. On this tour, the band has been attempting an experiment dubbed "The Spontaneous Curation Series," in which fans take to Twitter to put in their requests for the set selection and structure. It's a bold move that has apparently re-energized the band, the spontaneity keeping them on their toes while limiting the risk of lapsing into a set of formulaic staples. 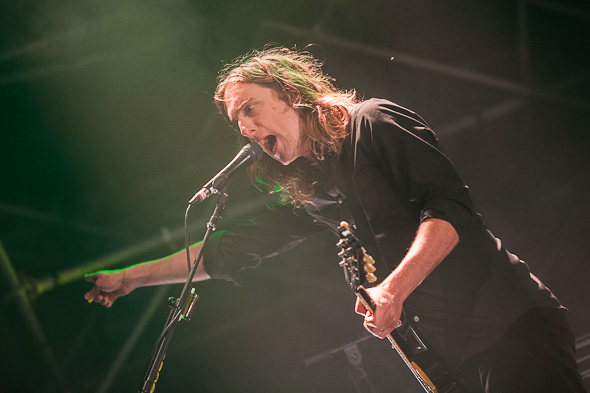 Echo Beach - or "historic Echo Beach," as James jokingly repeated a few songs into the set, despite the venue having only opened last year - got its fair share of unique surprises, most notably an appearance by much feted Canadian singer-songwriter Kathleen Edwards. Edwards, who was just shortlisted for this year's Polaris Prize, was a mean foil to James' elastic falsetto on a gorgeous take of "Golden." Later, Bridwell would return to trade verses with James, pairing their strangely similar voices on an acoustic "Wonderful (The Way I Feel)," getting lighters in the air and fans shushing overeager talkers.

At first, the crowd seemed a little reserved - opening with recent single "Outta My System" (originally penned for last year's Muppets movie before Bret from Flight of the Concords got the call) was an odd choice, with it's classic pop sound slightly at odds with the full blown rock show that was to follow. By the time the band got to epic extended takes on career highlights "Run Thru" and "Dondante," however, anyone doubting the MMJ's live prowess was won over. James and guitarist/occasional saxophonist Carl Broemel wasted no opportunity to indulge in lengthy solos, but instead of coming off as redundant or reductive of the songwriting, it was thrilling, visceral, and exactly what a large outdoor rock concert should be. 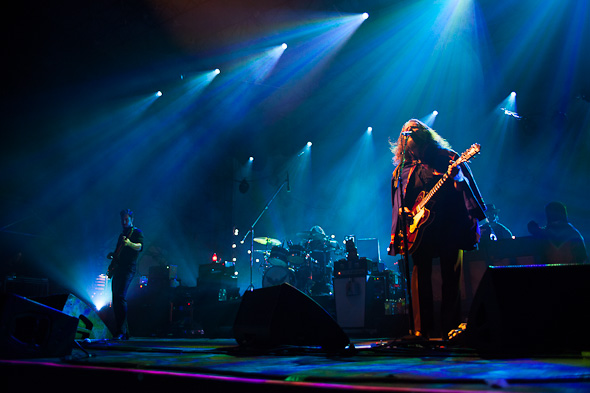 With little more than a complimenting light show and impeccable musicianship, it's obvious why My Morning Jacket are able to maintain such a cult following. They're one of the few active bands of their size that can actually embellish their songs with extended instrumental workouts sans overindulgent meandering, never venturing into Phish-dom. That's something to be commended, and in Wednesday night's perfect atmosphere, that's what brought in new fans and pleased the old.