Dusted is the side-project/brainchild of Brian Borcherdt (By Divine Right, Holy Fuck) and Leon Taheny (Final Fantasy, Bruce Peninsula.) Easily one of the hottest tickets at this year's NXNE, they played a packed showcase alongside A Place To Bury Strangers, Army Girls and Rituals at the El Mocambo as well as a set on the Toronto Islands.

Their debut record, Total Dust, has its official release on July 10th through Polyvinyl Records and Hand Drawn Dracula. Coming from musicians with resumes like these, one expects great things, and Dusted do not disappoint. Total Dust is an enigmatic and uncompromising debut, awash in gritty, feedback-laced guitars, clipping microphones and long, lo-fi reverb.

Total Dust opens with "All Come Down," setting the album's tone with lazy guitar strums against a background of feedback. The imagery that Borcherdt employs in his lyrics is surprisingly naturalistic — he makes repeated references to landslides, clouds and horizons, but they never seem out of place, and instead complement the record's atmospheric effects and background noise.

Many of these sounds have been rendered almost impossible to identify, like a clipped wail — maybe a violin &dash; that appears behind Borcherdt's hummed hooks on "Pale Light" or "Dusted."

The album's second track, "(Into The) Atmosphere," wraps a distorted echo around a singalong chorus of "It leaves you, right when you need it the most," until the song finishes with a swell of guitars. All these bare-bones effects help maintain a sense of tension, song-to-song, and show the band trying to exercise restraint and strike a balance between intimacy and power.

"Cut Them Free" is Dusted at their most raucous — voices pass through reverb, and guitar plucks create a sense of unease — but then the album quickly segues into "Low Humming," a claustrophobic, paranoid meditation highlighted by the lyrics, 'Get it out / Get it out of my mind,' and the audience is pulled down with them. "Low Humming," like "Pale Light," features a dreamy, minimal sound, but the record as a whole is grounded by the tense, controlled aggression that underpins songs like "Property Lines."

Now, I'm normally a huge fan of vinyl, and will usually advise anyone to pick up such a version of any release, but in this case, I'd recommend the CD — it includes a bonus track, "Centuries Of Sleep," which acts as a stunning coda to the LP, and sees the album slowly wind down as Borcherdt sings "I will sleep like a mountain, slowly eaten by a century of wind." As the record finishes, the audio is consumed by the noise of wind across a microphone, and then even that fades, leaving you wondering if you really heard any of it, or just dreamt it.

That hanging uncertainty is, I think, the whole point of the Dusted project. 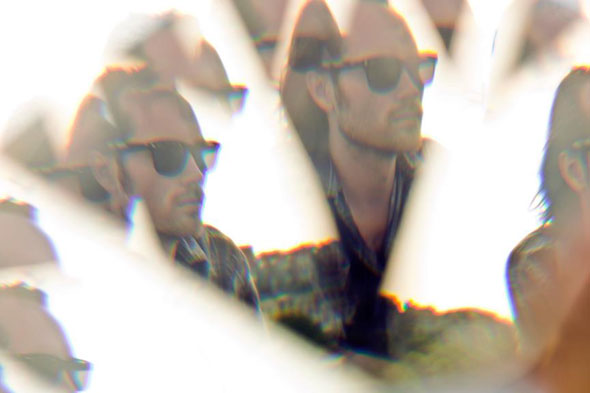 The band is having a release party for Total Dust this Saturday at Get Well (1181 Dundas W,) and will be joined by Cousins. After that, the band plays a few shows in New York and is back in Toronto to play Mod Club July 26th with Chad VanGaalen. They're even playing the Open Roof Festival at the Amsterdam Brewery; on August 16th you'll be able to watch Moonrise Kingdom, snack on sandwiches from Sky Blue Sky and hear a live set from Dusted.