Chicago soul legend Mavis Staples brought her signature brand of gospel and folk songs to the Royal Conservatory of Music's incredibly ornate Koerner Hall Sunday night. Having scored her first hit with the Staple Singers' "Uncloudy Day" all the way back in 1956, one might be led to think that her enthusiasm for performance or ability to command a crowd might have diminished over the years. Luckily, this was anything but the case as Staples and her stunning backing band awed a reverent, sold-out crowd for the entirety of their 100-minute set.

The a cappella "Wonderful Savior" was the show's opener, which found all six members of her backing band — one each taking up guitar, bass, and drums later in the show, and three backing vocalists, including sister Yvonne Staples — hunched around the singer with a few mics. Naturally, as the core trio picked up their instruments, the set would become increasingly raucous. Be it between the band or with regards to audience connection, however, none of the intimacy set by the opening number would be lost throughout the show, which included newer originals, various cover songs, and a smattering of Staples Singers classics. 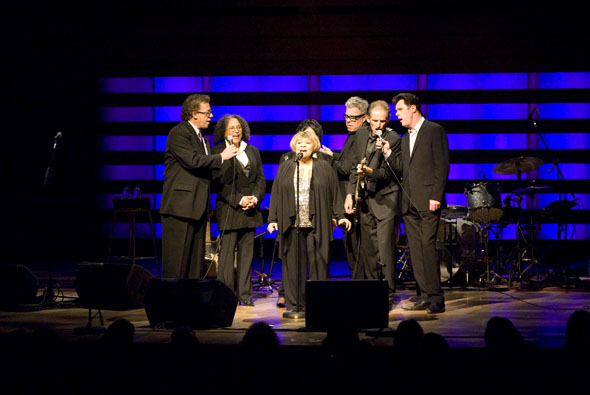 The date was part of a brief Ontario tour in support of her most recent album, 2010's You Are Not Alone, which was produced by a fan of a younger generation: Wilco's Jeff Tweedy. Due to touring commitments with his main gig, Tweedy couldn't be along for the ride, but Ms. Staples thanked him before launching into the album's title track — a stunning, comforting slow-burner written by Tweedy that certainly had a hand in nabbing the pair a Grammy for Best Americana Album.

The first half of the set found the band embellishing the songs in a clearly virtuosic yet tasteful way, allowing most of the focus to rightly remain on Ms. Staples. Her rich voice has lost none of its power over time, and if anything has only improved in range, with equal proficiency whether tackling an earth-shaking wail or a gruff groan reminiscent of a female counterpoint to later Tom Waits. 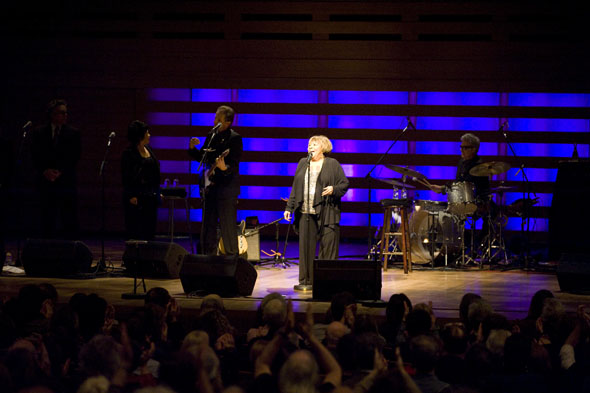 "Too Close/On my Way to Heaven" was a highlight, featuring a duet with backing vocalist Donny Gerrard whose smooth tenor served as a perfect contrast to Ms. Staples. All players involved exuded a confidence and understanding as to how to best serve Ms. Staples' voice and stage presence, with a notable break mid-set in which the vocalists took a brief respite, leaving the instrumentalists to conduct two quick, bluesy jams.

Ms. Staples' return to the stage was met with rapturous applause from a crowd spanning multiple generations, and Mavis was quick to return the thanks. "We could stay 'til tomorrow morning, if you'd like", she quipped, before launching into a two- song encore concluding with a stunning cover of Curtis Mayfield's civil rights anthem "This is My Country." Despite being about America, the song's sentiment is universal, and the mass singalong that ensued assured all — band, audience, and Mavis Staples — that soul music in the 21st century still has the capacity to inspire.

Eyes on the Prize
This is My Country (Curtis Mayfield)