Though Wildlife has been compared to bands like Wolf Parade, The Morning Benders and even the recent Grammy Award-winners Arcade Fire, the band's debut LP Strike Hard, Young Diamond was one of the most underrated albums of 2010. Like these bands, Wildlife's first full-length is a masterpiece, full of swagger and ambition. Guitarist and lead vocalist Dean Povinsky answered a few of my questions about their album, their process, and their history.

How long has everyone in the band known each other?

I've known our guitarist Graham (Plant) since we were sixteen and riding skateboards. We met Dwayne (Christie) a while after that, but didn't start playing music till about five or six years ago. Our keyboardist Tim (Daugulis) is cousins with Graham, so I guess they've known each other since birth. We bought our bassist Derek (Bosomworth) off Craigslist. He was seven dollars.

Seems that the intention of this album is to capture and celebrate the idea of youth. Listening to Strike Hard, Young Diamond, I feel like there's a certain kind of openness to experience and a willingness to trust one's instinct (like a child). How has this sense of being carefree helped the band in its creative process?

I think for the most part you nailed it. With everyone in the band, our tastes in music are actually really varied, and then we sort of converge in the middle on a bunch of things we all like. So when a song is being developed or when we're generating ideas in general, we really want to be open to anything to use for inspiration. There's some weird things in our recording that are a little buried or disguised that don't have a lot to do with sounds that you'd normally make. We kind of hate being told that something can't be done, I'd say the sense of being carefree applies most to when we play live though. Holding back during shows isn't something we're known for.

Your album cover recalls childhood memories of playing capture the flag or laying claim to your little corner of the world. Can you explain the images on the cover and what the title means to the band?

I mean, those images have such an archetypal quality to them, that's kind of the whole point. It was selected because when you look at it, it really needs no explanation. It's an emotional reaction that goes a bit deeper I think. That sounds pretentious. The flags strewn about the beach with the ocean in the background had this instant feeling of the aftermath of something huge and meaningful, sort of between the way the world was and the way it is now. It just totally embodied all the themes on the record in a visual way, and when I look at it it's simultaneously beautiful and sort of horrifying. 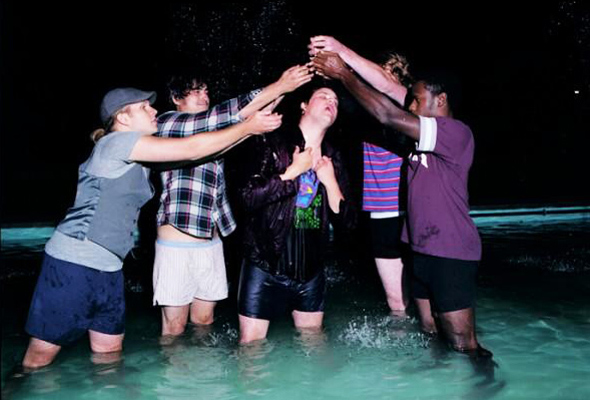 There's a lot of water imagery in Strike Hard, Young Diamond, an image sometimes associated with the idea of voyage, like in your song "American Eyes". In "Stand in the Water", the lyric "They're all going somewhere" becomes a rallying cry. Where is this fictitious place - the "somewhere"?

Well I guess it's both literal and metaphorical on a few songs. Water to me is all about connectivity and the unknown. When you're on a voyage or a quest or some kind of journey it's so often based around water, in different ways. It's not only a means of moving, but completely represents the mystery and uncertainty of adventure. Lakes, oceans and rivers can be deep and black and unpredictable, but usually there's no other way around. It can be your damnation or your salvation. I think it means different things in different songs, though.

"American Eyes" borrows a lot of imagery from the stories of Ernest Shackleton's journeys to Antarctica, the harshness of that kind of life and how small you can feel in a situation where you feel dwarfed by the magnitude of the world, and mashes those ideas with imagery about America and what the cost of all that discovery can be. "Stand in the Water" is all about connectivity and how we share so many of the same impulses and often come to a lot of the same realizations, but rarely through the same avenues. It's about other stuff too. Possibilities.

Music writers seem to focus on the song "Drunken Heart". For me, the song sounds cinematic - a film and score all in one. The same goes for the track "American Eyes". How important are settings or sense of place in your music? Are there sketches of Toronto in your album?

They do? I feel like there's definitely other songs people gravitate toward but it's hard to tell. There aren't really sketches of Toronto I don't think. There are no direct references anyways. The song "Move to the City" is definitely influenced by moving back and forth from smaller places to big ones, and Toronto is the last big city I moved to. It's about trying to figure out where to call home and people's loss of identity when they start to grow up. Setting is pretty vital to lots of the songs on Strike Hard, Young Diamond, but it's almost never a dead giveaway. It's more about trying to find universality and common experience through my own thoughts. Toronto can be awesome, but if you let it get to you in the dead of winter it can feel heartless. "Drunken heart" has a lot to do with that.

I like how the one instrumental track in the album is called "Synesthesia". Which senses other than sound would help you describe Wildlife?

Mmmm. We taste good. We wear deodorant. Someone said our motto should be "sweat, smoke and lasers"...

I just watched your takeaway show on Southern Souls and "Stand in the Water" sounds different but just as epic as the original. Is it tricky to replicate how songs sound in a recording? How important is it to you how the songs will sound live versus how they sound on recording?

Thanks for the compliment! I'm glad you dug it. When you strip it down like on Southern Souls it gets a lot more raw. It's really fun to do, and if a song stands up in a naked acoustic setting, it's a pretty good barometer of its ability to stand on its own. I think Mitch Fillion's (Southern Souls creator) camera work and spontaneity really add to whatever else it is he captures.

As per how the songs sound at our shows, it can depend on where we're playing, but our record was meant to be really, really representative of how we sound live. So we tracked most of it that way. It has a rawness and a fury to it I think, and that's what we wanted to push. At our live shows we're pretty faithful to how they sound. We try to make songs huge and have similar dynamics to the record, and yeah, basically the most important thing to us is to have people see the band and be even more psyched on the intensity of the live show.

Strike Hard, Young Diamond is a collective-conscious effort. I feel like one of the themes of this album is unity: the collective aspect of Wildlife overcoming its counterpoint - the isolated individual. How do you pull together all these different minds into one sound?

Haha. That question only really stands on the assumption that the former statement is true... You're not too far off though. We argue when it matters, and then I freak out and get my way. Having differing opinions and ideas floating around is what makes a thing like this fun and interesting. We are aware of the fact that we're so much stronger as an entity. You pool your resources, your thoughts, help each other out. So we are always experimenting with our sounds, bringing new things to the table and making suggestions, always trying to make a song better or different, and then bringing it back into our own design.

I feel like that sounds like every answer anyone gave to that question...ever. But for real, if a thing is going way too much in a derivative or clichĂŠ direction, we try to flip it on its head and avoid that. When I write a song at home it comes from a very melodically minded, pop minded place. But when it gets to a deeper stage there's a definite push to make things simultaneously unique and familiar. Our record label, Easy Tiger, is the same way: it's all based on the knowledge that so many of these things are impossible to do on your own. It's all very Canadian really. We've got a democratic voting system, a socially minded public policy and a capitalist economy. We're probably operating a greater deficit though...

Catch Wildlife for their CMW Showcase at The Horseshoe Tavern tonight (March 12th). Check their MySpace Shows & Events page for other upcoming shows.

You can purchase Strike Hard, Young Diamond online on the Easy Tiger shop or at the Wildlife Bandcamp site.

Also, check out The Neighbourhood Mixtape: Meet Me in the Middle to listen to their single "Stand in the Water" and download the anthemic "Move to the City" below courtesy i (heart) music.

Photos of Wildlife taken from Racecar Spacecar and Chris then Lee's.