I was underground at Dundas station when I met TTC busker and guitarist Lane Argue. It was one of those rare, gloriously sunny days Toronto experiences in the late winter, but I was content to stick around in the tunnels, watching and listening as Lane's song rolled and ran, reckless and barefoot.

It grew faster and more complex, and soon Lane's fingers were flying over his fretboard. It came in pieces, each with a new spurt of energy. When it was over, I had to hear it again, so I asked Lane to replay it for this week's video.

A short chat with Lane revealed a little more about the Saskatchewan-based guitarist and his inspiration for the song.

Tell me a bit about yourself. Who is Lane Argue?

I came from Grenfell, Saskatchewan. It's a small town 80 miles east of Regina. I came to Toronto when I was 18, all by myself, just to do the music thing. One of my friends, Nelson Gorchynski, also moved here from the town I grew up in. We auditioned as a TTC busker duo and we've been at it for the last year. We try to play together as much as we can, but often it's just me.

I guess I'm many things to different people. Mostly I'm a musician, a friend, and a human being. That's me.

How long have you been playing the guitar? How did you get into it?

I've been playing guitar for about 13 years now -- for six or seven years pretty seriously, especially the last five. I'm 20 years old. I started playing when I was eight. My dad had a guitar, so when I was a kid, I'd see him play and I'd want to play too. I had to beg my dad to get me one so I could start playing myself, and he did. 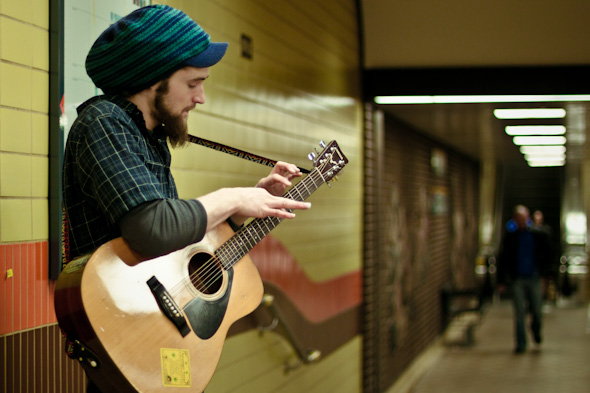 What does that yellow label on your guitar say?

It says "Vintage Vinyl." That sticker is from a shop that I like in Regina, which is very close to where I grew up.

I'd say it's an eclectic folk-rock-roots mix.

What made you decide to be a TTC busker?

I guess busking was always in the back of my mind, before I came to Toronto. I thought I'd try it out on the street. It was okay...I had some good days. But I'd always see these TTC buskers around, so I looked into the program, auditioned, and got my licence. I've been a TTC busker since October. I have a street licence too, so in the summer when it's nice out, I do that as well.

What's the main difference between street and TTC busking?

The TTC is nice because the acoustics are really good in some of the stations. And it's warmer, sometimes. But I like the street when it's nice and sunny out, especially on the weekends, when everybody's shopping and not in such a rush. I can't say which I like better, but I use my TTC license more. 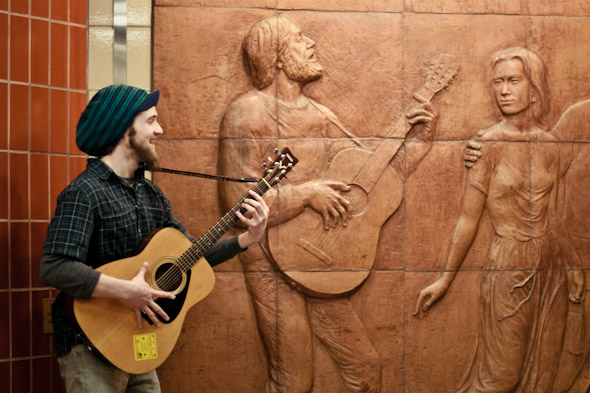 Nelson and I go by [the name] The Livin' Art...we do those gigs probably every three weeks. We also have a cover band. And I teach guitar lessons. Between those three things, I seem to make it happen.

Does The Livin' Art have a CD out?

Yeah, we have a debut. It's $10. We have it with us every time we're busking or at our gigs. You can also get it from our MySpace.

Tell me about that song you played for me the other day.

I call it Charlie, after my sister, who lives in Alberta. It's a nice way to remember who I am and where I came from.

I started writing it a few years ago, right before I moved to Toronto. I continued to write it when I got here, and now I'm still working on it, kind of. It's influenced by the bluegrass I heard in Saskatchewan. The rest came in pieces -- a lot of pieces make that song.

One guy at Dundas station came up, drinking a bottle. He gave me $5 and he wanted me to play Led Zeppelin, Jimi Hendrix, all these old songs. He was really loving me and he wanted to keep giving me more money. I played for him for about half an hour, until I had to go. When I tried to leave, he took his $5 back and tried to beat me up.

Joints. And somebody gave me a necklace once, I don't know why. They just took it off and gave it to me.