As I filmed TTC busker and guitarist George Sanchez at Eglinton station, I was delighted by his rich voice, boyish demeanour, and contagious enthusiasm for his music. It was a video in which I'd notice a new detail with every replay on my computer, and it was a performance that would have me tapping my foot long after George disappeared for six weeks to Colombia.

It wasn't until yesterday that we got in touch again, and I had a chance to get to know the real George Sanchez. By that time, I'd watched video-George perform El Bodeguero so many times that I thought I'd had it all figured out.

Leave it to George, of course, to surprise me and get me to notice a few more details.

First of all, tell me a bit about yourself. Who is George Sanchez?

George Sanchez is a musician, a person who loves to sing and play the guitar. He loves performing and enjoying life in general.

In the video, I noticed you were wearing a Colombia touque. Are you from Colombia?

Yes, I was born in MedellĂ­n, Colombia, South America. I just got back from there, from a six-week vacation. I have some family there. I have a few aunts, and my dad still lives down there. I was just visiting friends, mostly.

I've been playing since about the age of 15. I've been singing a lot longer. I used to sing when I was a little kid, with my grandma. She was a really great singer.

It wasn't difficult for me to get started because I come from a family with a lot of singers, starting with my grandmother. My mom and her sisters sang, too. I have another aunt who did pretty well singing back home in Colombia. She won several contests and recorded a little bit. My dad also played the guitar and sang. So I guess I inherited all of that.

Were any of them big names in Colombia?

Just my one aunt. She did pretty good, won several national contests. At the time she was a nun, too. She decided to follow her career in the church.

Can you tell me about the song you sang for me, El Bodeguero? What's it about?

It's a Cuban song about La Bodeguita del Medio, which is a very popular place in Havana, Cuba. Ernest Hemingway had his own little spot over there. He used to love to go there and drink Mojitos, now one of Cuba's national drinks and just listen to the music and see the people. The song talks about the owner. You can go there and have a great time at La Bodeguita del Medio. It's simply about that place.

"La bodeguita" means "the warehouse" translated in English. They still have the original seat in the corner that Hemingway used to sit in every morning. It's visited by famous people all over the world, from presidents to famous artists and so on. They head down there to try the Mojitos and tour the atmosphere.

I try to play different styles of music. I play a lot of ballads and a lot of lively music, some Mexican music, but I also can sing in Italian and a little bit of Swahili. And obviously English and Spanish. 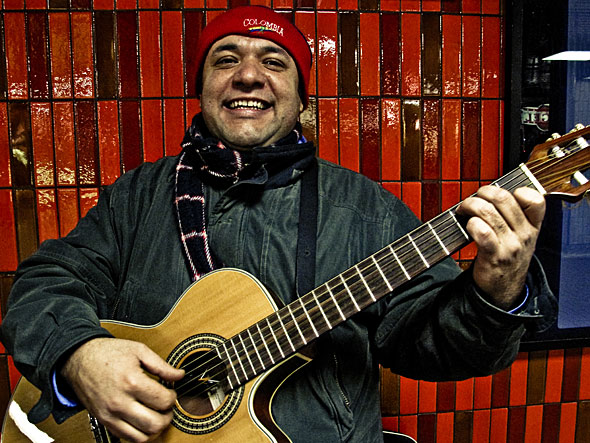 Why did you become a TTC busker and how long have you been one?

I've been busking since '98 with the exception of about two years. I became a TTC busker basically out of need. Being a musician can be difficult sometimes and back then, having a family and responsibilities, I needed to get some money together to help pay the bills.

I'd also use it as a promotional thing. People will hear you, listen to you, and they'll hire you for their gigs. For their parties or their birthdays, or whatever occasion that they have.

How often do people ask to hire you for these other gigs?

Well, I mean it's not the strongest venue. But you get a couple or so a year. Two to four, sometimes more.

What's the best and worst thing about being a TTC busker?

The worst thing about it is that come wintertime, it's pretty cold. You have to be out there, and your fingers and nose get all cold. Trying to sing and play like that can be very difficult sometimes.

I try to get all my income out of music. It's great to be able to keep yourself sustained financially with it. It's not a great living, and sometimes it can be pretty stressful, but I wouldn't have it any other way. It's fantastic, and there's a lot of great personal satisfaction to be gained from making a living doing what you love.

Sometimes you'll get some people who just have a miserable attitude. They'll come over and vent at you. The other day at Yonge and Bloor, I was taking a break from music and I had an old man come up to me and start swearing at me, telling me that all the TTC musicians play the same thing. He said, "You and all your friends are a bunch of bums." We buskers have to bite our lip and not say anything when that happens.

And then you have people come up and tell you that they've heard a piece that they love, and it's made their day. You know, it has its pros and cons. It's not bad.

Some people will come up and bring you coffee and donuts when it's cold. I really appreciate that. Sometimes you'll feel down and the tips aren't coming in, and you second-guess yourself. But you'll get someone who gives you the thumbs up or tells you that you should start recording. That's always great.

I've had somebody come up and say, "I have no money but I would like to give you a hug." That makes you feel pretty good, you know?