WEDNESDAY NOVEMBER 11 / PETER, BJORN & JOHN / PHOENIX / 410 SHERBOURNE ST / $20 / 19+
Swedish breakout act PETER BJORN AND JOHN bring their melodic brand of indie-pop to the Phoenix in support of their latest full length Living Things. In the last year, they've been sampled by Kanye, collaborated with Toronto's own Drake and released a remix album featuring the likes of Wale, GZA and 88 Keys. Joining them is fellow Swede Sarah Assbring, who has been releasing lo-fi indie-pop records under the moniker EL PERRO DEL MAR since late 2003.
peterbjornandjohn.com
myspace.com/elperrodelmar

WEDNESDAY NOVEMBER 11 / J. TILLMAN / HORSESHOE / 368 QUEEN ST W / $13.50 / 19+
Seattle-based folk singer/songwriter JOSHUA TILLMAN steps aside from his day job as a member of FLEET FOXES to embark on a solo tour in support of his most recent album, Year in the Kingdom. Joining Josh is his brother ZACH TILLMAN with his indie-folk band PEARLY GATE MUSIC.
myspace.com/jtillman
myspace.com/pearlygatemusic

THURSDAY NOVEMBER 12 / GARRISON OPEN HOUSE / THE GARRISON / 1197 DUNDAS ST W / RSVP / 19+
According to Stillepost, the Garrison is hosting an RSVP-only open house featuring some great Toronto acts like THE DIABLEROS, FOXFIRE and SHIT LA MERDE. The official Garrison website has it listed as a private party, but throw an email to RSVP[at]garrisontoronto[dot]com for your chance to get in.
myspace.com/thediableros
myspace.com/foxfireforest
myspace.com/shitlamerde

THURSDAY NOVEMBER 12 / BIG DEAL & THE ZOLAS / LEE'S PALACE / 529 BLOOR ST W / $7 / 19+
Toronto's own BIG DEAL headline their first show at Lee's Palace on Thursday night, calling up fellow local act THE JON EDDY BAND, Victoria BC natives CURRENT SWELL and Vancouver's THE ZOLAS to warm the crowd up. Touring in support of their recently released debut LP Tic Toc Tic, THE ZOLAS are a great up-and-coming indie act not to be missed, especially at this price.
myspace.com/thebigdealtoronto
myspace.com/thezolas
myspace.com/currentswell
myspace.com/thejoneddyband

FRIDAY NOVEMBER 13 / BAND OF SKULLS / EL MOCAMBO / 464 SPADINA AVE / $15 / 19+
Southampton, UK alternative rock trio BAND OF SKULLS headline the El Mo on Friday night. Despite only forming last year, the band has skyrocketed into recognition since the inclusion of one of their tracks on the star-studded soundtrack to the forthcoming Twilight film. They'll be joined by BIRTHDAY BOYS, an unsigned duo fresh off the independent release of their debut LP Bad Blood, which received a whopping five star review from Chart Attack.
myspace.com/bandofskulls
myspace.com/birthdayboysmusic

FRIDAY NOVEMBER 13 / THE WOODEN SKY / LEE'S PALACE / 529 BLOOR ST W / $12 / 19+
An all Toronto show featuring BRIAN BORCHERDT, HOODED FANG and a headline set from THE WOODEN SKY, whose recent Black Box Records debut If I Don't Come Home You'll Know I'm Gone is one of my favourite albums of 09. Get your tickets in advance, as it's sure to be packed at Lee's with all the Friends in Bellwoods coming out to support their own.
myspace.com/thewoodensky
myspace.com/hoodedfang
myspace.com/brianborcherdt 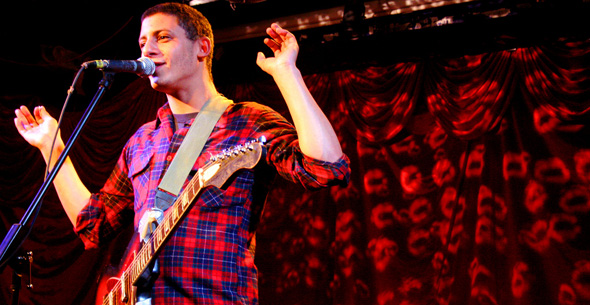 TUESDAY NOVEMBER 17 / THE RURAL ALBERTA ADVANTAGE / SOUNDSCAPES / 572 COLLEGE ST / FREE / ALL AGES
The RURAL ALBERTA ADVANTAGE take some time off from touring the States in support of their Saddle Creek debut Hometowns to play a free set at Soundscapes Records. To say this has been a big year for Nils, Amy and Paul would be a massive understatement. Their set starts at 7, but get there way before that if you expect to get through the doors.
theraa.com

For more music listings, head on over to our events calendar.