Last night Darrelle London had a CD release party for Edible Word Parade at Supermarket. After only one minor disappointment (which Darrelle cannot be held accountable for) the rest of the evening satisfied my sweet tooth and my undying need for great music.

I had only heard a few tracks on her MySpace page, so I wasn't completely sure what I was getting myself into. However, I do have a weakness for singer/songwriters, and what I heard online reminded me of Lily Allen - but without the potty mouth and the large team of songwriters doing all the work for her.

That was good enough for me. 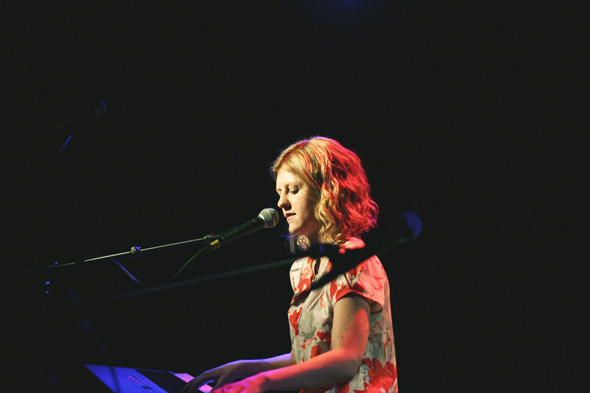 The one minor disappointment: I ordered a pint of Amsterdam Blond at the bar and a half pint for my partner in crime. I don't know if the Supermarket is at fault, if it was a bad keg, or if I had wronged the bartender in another life, but that beer was not okay. My personal security officer insisted that her brew tasted like "someone had burped into the cup prior to pouring" and mine was reminiscent of a small, dead, skunk. While this isn't relevant to the show, it does matter to people who wish to frequent the bar. And I move on...

While we waited for Darrelle to set up, I noticed people around me munching on cupcakes. Because I am a bad friend, I lied to my friend and said that I had to go to the washroom, but really I just wanted to find those cupcakes - and I did. All ninety-one of them. She later explained that they were courtesy of her parents, who were in attendance. The night was getting better already.

The Supermarket was packed and I actually sat outside of the stage area, but still managed to secure a good view.

Darrelle London was adorable. She is a talented vocalist, pianist, and her interaction with the audience was wonderful. She performed solo for the entire set, except for one song where she had a back-up guitarist who also added soft vocals to her melodies.

My two favourite tunes were Understand, and Selfish, but they were all enjoyable. Her songs are light, poppy, and fun. She has a great sense of humour and listening to her talk about each song really drew me into her performance. I thoroughly enjoyed myself and I even managed to forget about what that bartender did to me a little earlier.

She finished with an excellent rendition of Kermit the Frog's 'The Rainbow Connection'. Then, much to my disappointment, the show was over.

Darrelle will be playing a few shows out of town over the next month, but will be returning to grace C'est What on March 26th.