What do you do after you've made a million dollars, toured extensively playing to sellout crowds in large venues? If you're Steven Page of Barenaked Ladies, you perform about a dozen songs of your favourite artists accompanied by a chamber music ensemble.

Friday night's Songbook 2 program with the Art of Time Ensemble (AoTE) at Harbourfront's Enwave Theatre had a little something for everyone. Page's songbook included tunes he said he wanted to sing ever since hearing them for the first time on Brave New Waves.

Songs like Elvis Costello's I Want You, an emotional song that I've seen performed by Fiona Apple live. But this stark arrangement with the AoTE by Robert Carli had particular impact. Other selections included interpretations of songs by The Mountain Goats, The Magnetic Fields, The Divine Comedy and The Weakerthans.

Read on for more review of Friday's show and a peek into next year's Songbook....

This show was the season finale of the Art of Time Ensemble season. It appeared to be attended by regular Toronto Symphony Orchestra conertgoers. Perhaps they weren't as well versed in the lyrics of Leonard Cohen, or perhaps the lyrics were just that much more coherent sung by Page with the Gavin Bryars arrangement and AoTE orchestration.

Page sung Cohen's A Singer Must Die, which he introduced as "the mantra of all bass players." When he sang Cohen's lyrics, I heard a few guffaws from two rows back after the line "It's their ways to detain, their ways to disgrace, their knee in your balls and their fist in your face," as if he had heard the song for the first time.

A lot of the songs Page performed without strumming his guitar. He looked rather constricted in his crisp dress shirt, striped tie and navy blazer. Perhaps a little too dressed up for the occasion. I wonder how many Barenaked Ladies fans were actually in the audience.

The idea behind Songbook is to introduce audiences to new genres of music through collaborations such as this. I thought this would mean introducing works of the likes of Prokofiev to the popular music crowd, but it looks like the reverse is true as well.

When Burashko introduced Prokofiev's Sonata in F minor for violin and piano, he mentioned that Prokofiev's death was completely overshadowed by the death of Stalin, as they died on the same day. But it appeared that this crowd didn't need much educating, as I heard nary a clap in between movements.

Page toured with Rufus Wainright at the peak of their success. "Perhaps it wasn't the best idea having Rufus, an openly gay singer/songwriter from Montreal, play in front of a large crowd in St. Louis, Missouri," Page said. "It was certainly a wake-up call to where we were at the time."

Page dedicated his rendition of Foolish Love to Wainright as an apology.

One of the highlights of the evening's program for me was the treatment Page did of Jane Siberry's The Taxi Ride, intricately arranged by Glenn Buhr. "It's a song about giving something away," Page said in introducing the piece. "Giving away the one you love."

It was beautifully put together albeit a tad lengthy. But it was totally worth it for the song's emotional payoff that Page nailed at the song's climactic ending.

The evening ended with what Page introduced as "a song by the obscure 19th century composer, Radiohead." Hearing Page sing Paranoid Android took a little getting used to, but the dramatic arrangement gave it a life all its own.

The audience just ate it up, giving a standing ovation. This musical formula must be working at some level after all.

For more insight into the Songbook series and how all the elements come together, take a peek back at blogTO's interview with Andrew Burashko and their America & the Black Angel program.

Previous incarnations of Art of Time's Songbook collaborations featured Sarah Slean, which you can now listen to on CBC radio2's website. The Steven Page concert was similarly recorded and hightlights from the weekend's concert will be broadcast on CBC's The Signal with Laurie Brown on radio2 (94.1 fm) on July 23 between 10 p.m and 1 a.m. 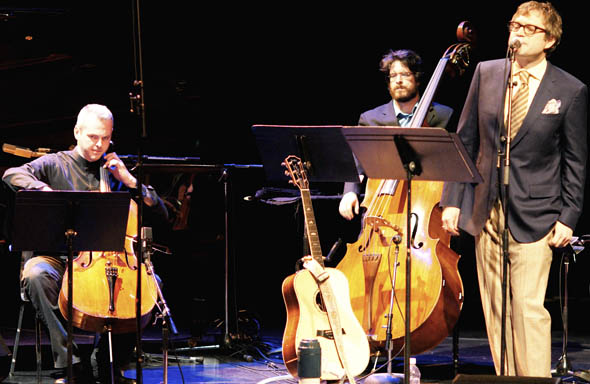 Next year is the AoTE's 10th anniversary season. The Songbook III program will be their season finale on May 26 and 27, 2009 and will star singer-songwriter Melanie Doane performing wild new arrangements of contemporary songs. The concert will also include two classical works.

I'm not all that enthusiastic about listening to a concert with Doane. She had better put together a compelling song selection. I'd prefer to hear this series continue with other Canadian musicians such as Rufus Wainright, David Usher, Emily Haines or even k-os.