This is the first in a series of interviews with up-and-coming promoters who are throwing parties around Toronto.

I first hit up a Primary Colors party back in September of last year. With the lurid title of Big Dicks & Barbie Dolls, it was hard to not be intrigued despite having some misgivings about artists successfully attempting to say anything interesting when it comes to sex. Nevertheless, I went and had a fantastic time.

One night at the Boat and a loft party later, I was definitely into Alex Coleurs and Co.'s vision of themed, cohesive, dirty dance parties. The artists he brings in are varied and even the resident duo of DJs, Girls Like Us, aren't filler padding out the set list as is sometimes the case when promoters take a turn at the deck.

Most of all, Alex walks that really fine line between art and partying and makes it really fucking hot so I was interested in discovering what he was all about.

What is Primary Colors?

Well, Primary Colors is not a collective in the sense of a democracy. Ultimately, I make the decisions. But it is a collective in the sense of a collective voice. There's a general understanding that the people I work with share. When I started Primary Colors it was just me, but gradually more people have become involved in the movement. As a group, we don't just throw art shows or dance parties although we do that as well. Art shows and parties are like carnivals, we're like carnies. Even if there weren't any art shows, we would still be carnies.

What was the first party you ever went to?

House parties was where I started out, just getting into the groove. It's been the driving force of how I get into a really comfortable vibe ever since.

One of my favorite types of parties was going to raves when I was younger, seeing Dieselboy, those kind of shows. I wasn't that into drum n' bass, I did like the scene though. Secretly I listened to happy hardcore, mostly to help me fall asleep at 185 beats per minute. I dreamed really fast. I think that's why I like Dan Deacon; he helps me dream fast.

Where were these parties at?

They were in Pittsburgh.

So you're from Pittsburgh?

No, I'm from Philly but I used to go up Pittsburgh all the time when I was in eighth or ninth grade. I don't like to think about the past too much. It was fine and fun, classical music, rap music, bad music for good people, good music for bad people, etc. etc.

When did you move to Toronto?

I moved here about five years ago.

What was it like, going from Philadelphia to Toronto?

Philadelphia is a very different city than Toronto. I'm still feeling the transition. Philadelphia is grimier, dirtier. It's hard to get people out in Philly to an event. You have to offer free Pabst all night and charge 5 dollars at the door. But in many ways, all that griminess is what makes Philadelphia a great city. A friend once told me that Philly is like having raw butt-sex with a 2 dollar whore. I think there's a lot of truth to that. Also, the feeling of Philly is local, in many ways. I've been trying to do that here in Toronto; create locally.

What kind of parties do you go to up here, besides your own of course?

The only kinds of parties I go to now are the ones in galleries or house parties. I actually stray away from going out too much; from going to too many parties unless it's in a gallery. I guess I feel most comfortable dancing when there is a painting on the wall or it's conceptually-organized... when I feel that the promoter has really put some time and thought into the space... that's when I'm really feeling the party.

Parties at a bar... I don't know, it just doesn't work for me. I want it to be a little bit more; if its going to be a bar, I want it to be a Portuguese restaurant or like Teranga; that's how they do it in Philly... noise parties in basements and all that stuff.

Well, people often get stuck on finding an "official" space to party and really, you can hold one anywhere, right?

Big Dicks & Barbie Dolls: A party with art or an art-show with a party? Is there a difference in your mind or does it all blend together?

You see the thing was, it wasn't all art-show and it wasn't all party. It was a party with art. It was just really fun and relaxed. That's what I go for and feed off of... that energy of when you're in school and still producing and you're really eager; I really feed off of it.

It certainly felt different than a lot of openings I've been to.

Well the light are on so it never develops into what it could fully be; a party in an art-space.

So you're not into these self-imposed rules people sometimes apply to what a party can be, where it should be held...

Not just a party at a bar but something with a bit more conceptual preparation behind it.

Exactly, I want it to feel like a painting. A party is essentially a blank canvas that you have to fill with elements throughout the night to help the vibe of the event stay cohesive. It's not like a DJ in an ivory tower, speaking down to everybody.

What kind of people go to your parties?

Primary Colors parties relate primarily to art-school kids and photographers; people who are into constant creation.

Yeah, parties for creative people. It just worked out that way, that crowd really responded to it and I think that's great. Still, I see these new faces all the time and they're really excited about what's going on; it really inspires me to keep going with this thing.

What do you like about doing these art parties?

I like that a lot of the people who come out are people who don't usually like to come out. They find that my parties are comfortable enough where they can just let go. People who only go out once a month and they choose to come out to this and they have a great time.

True enough, a lot of students I knew at OCAD didn't like to go out very much unless they found a party they could feel comfortable at.

The bottom line is it's about having fun and so many parties are too serious... like you're going and watching a dissertation on Getting Down. It doesn't have to be like that, it can be more like a house party which, ultimately, is the most comfortable kind of party there is.

A rotating house party. You never know where it might be...

Anything you dislike or are trying to improve on?

Every party is a lesson for the next party and it's always building into something else. There's nothing I hate about these parties, I love the vibe.

Do you have any favorite collaborators, people you really enjoy working with?

I'll just say that I'm working with a few people at the moment... Lance Ludwig (note: he does visuals) and Steve Rock are two examples but I'm doing a lot of independent work as well.

You're part of Girls Like Us, the Primary Colors resident DJs. As a package [you guys] are put together very well but not calculatingly so. How did you decide what to incorporate?

We felt that we needed to calculate how we are presented, but be free from that point on. Once the first song goes on, we break loose, go crazy. It's fun and exciting to be a girl like us...it lets you stay up late at a slumber party, or eat ten cookies before dinner. We ruin our appetites if we feel like it. We can't calculate when we will eat too many cookies, we just let that happen naturally.

How does Girls Like Us fit into what you're doing with Primary Colors?

Girls Like Us exists because people don't go to church anymore. We've decided to wear masks and we will continue to wear masks until people go back to church. GLU is a limb of the primary colors body. It's the holy order. It's primary primal partying, masked and anonymous.When people are wearing masks, all hell breaks lose. It's pure impulse. It's how Primary Colors enters the world: masked. In this way, there's not just one face to Primary Colors, but a billion, anonymous, interesting and beautiful people interacting with each other.

I'm going to be working with Nik Dudukovic on a Nuit Blanche party; I'm really pumped about that because it's gonna be everything you ever wanted from Nuit Blanche which was pretty weak last year.

I remember at Big Dicks, there was this dude who got on the stage and he had a megaphone and was screaming into it; that was fantastic actually. Do you remember that?

Oh, Project Jenny Project Jan! I brought them up from Brooklyn. They were touring with Fujiya & Miyagi. I may be bringing them up again because they really understand the concept of a party.

While I think it's important to support local talent, there are so many great acts coming out of Baltimore like Wham City. Yes, I get really excited by the Baltimore scene. I don't mean Booty Bass; [I'm talking about] Dan Deacon, Adventure, etc. I'm bringing Adventure to Toronto on May 2nd actually. I love introducing Toronto to acts they might not be familiar with.

Anything coming up that you're really excited about?

This is not a monthly. I'm not into monthly events. I like my events to jump up, out of nowhere. So "C" will not necessarily be in June. It could occur at any point. Adventure from Baltimore, Narwhalz from Virginia and Dog Dick from Miami will be performing in the experimental room. In the main room, Sta will be DJing. It's a combination of noise/experimental sound and dance DJs. In Philly there are tons of these events; noise then sound.

When I go back to Philly, I always find myself in someone's basement on a Tuesday at a noise show. I wanna combine noise rock with dance parties. So many different kinds of people coming together for a common goal... all crowded into a basement and sweating it up.

I'm also launching an experimental sound and visual evening called The Problem With Science. They will all be art-space parties--white room, a million options, etc. This will mostly be an in-house event, featuring Primary Colors and Primary Colors-associated artists, such as See.Saw.Sketch. I will also be throwing art shows throughout the summer at Whippersnapper Gallery. 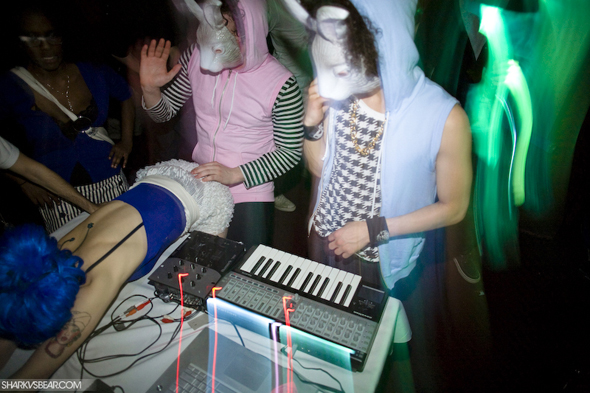 Photos by Alex Coleurs and Shark VS. Bear