Before taking my girlfriend to the Air Canada Centre to see the Spice Girls for her birthday last night, I hadn't ever been to a pop concert. I'd been to pop-ular rock concerts, sure, even festivals but nothing quite as over-the-top-with-a-cherry-on-top as this was, and I'm glad I went - especially since they've just decided to cancel the rest of their world tour.

The fact that Toronto also won special honours and extra dates in the international online "Spice City" voting made the show feel a little more special from the seats, and no doubt from the stage as well. My impression of the night and the deal with the tour cancellation, plus video clips, after the jump.

Though the inherent commercialism ($20 programs, $50 shirts) can't be avoided when dealing with capital-P Pop music, the Spice Girls are a group that have made a very positive impact on the world and this carried through strongly despite the "cash grab" feel that hangs on most reunion tours and was certainly repping strong here.

Their cries of "girl power" may have been somewhat removed from bra-burning, full-tilt feminism, but the positivity and strength that they did infuse their fanbase with was undeniable to anyone who witnessed it in the '90s and the difference between their music and current pop is apparent when the two are held side-by-side.

In fact, while we were waiting for the concert to begin, I was listening to the music that was being played and much of it really wasn't up to Spice standards. "Hollaback Girl" was an appropriate song to play in advance of the Girls taking the stage, but I really don't think "Promiscuous" fit into the mantra (commercialized, granted) of conscious female empowerment that made the Spice Girls so significant... and if you don't think the Spice Girls were anything but commercially significant, you should ask an early-20s/late-teens woman how the music fit into their development.

Given the way the Spice Girls originally broke apart into solo projects, it was interesting to see how their past was handled or avoided on stage. Though they joshed it up on stage, complete with mild groping, there did seem to be a disconnect if not tension between them at times. Victoria in particular never seemed to make eye contact with anyone, although that was sort of her Posh character all along.

In terms of how it played out in their set list, they did include three songs that the 4 remaining Girls released after Geri skipped out on the band and North American tour, although Geri was actually included on "Goodbye" even though originally it had been the first single without her. During the song, I noticed that the beaming smile she'd otherwise kept through the entire performance had dropped and she appeared to be fretting, even pursing her lips. I guess there's a chance she forgot the words to the song, it being a 4-girl single, but maybe she did know the words and was feeling them rather personally. 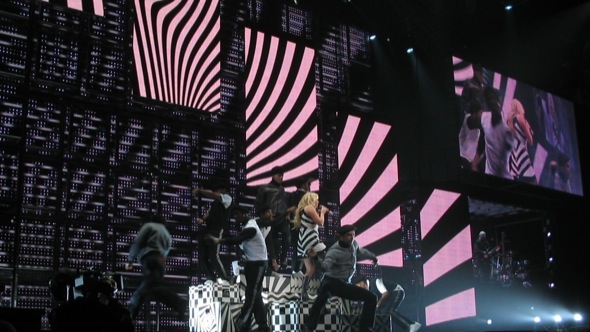 They also included solo material for each of the 5, which promoted across the tour could very well mean follow-up solo work. Geri, Mel C and Emma (shown above) performed solo songs from their own catalogues while Mel B covered Lenny Kravitz' Are You Gonna Go My Way. Victoria, calling out to her time spent as a model in her more Beckhamful years, pinned an elaborate tail on her dress and strutted down the extended stage platform like a catwalk.

As a group, they also covered Kool and the Gang's Celebration, The Jacksons' Shake Your Body (Down to the Ground) and Sister Sledge's We Are Family, adding musical diversity amidst the megahit playlist.

Incidentally, if you feel a burning desire to pay through the teeth to a scalper, the group is supposed to be coming back February 25th and 26th. The rest of their tour beyond this month, however, in Australia, China, South Africa and Argentina has just been cancelled, outraging many fans. You can hear the news explained by the Girls themselves in a video on the official Spice Girls website, and I'll leave it to you to make up your own mind about how genuine they seem in it.

Though the original announcement cited family life and the difficulties of "logistics", it seemed to me that it was possible to see it in their faces on stage.

But at least I saw it in their faces, from the 4th freakin' row, 'cause it was still one hell of a show.