(Dj Dopey does it up during intermission)

It had been quite a long time since I'd seen a high-caliber scratch DJ throw down, which is why I jumped on the chance to check out the battle of the year - the DMC national finals. On Friday night at the Mod Club, 10 of Canada's best turntablists competed in the final round of the national elimination-style DJ competition.

Each DJ had a maximum of 6-minutes to show us their best on two turntables and a mixer, using straight up vinyl (no effects, laptops running Serato or Finalscratch, etc).

It was hugely entertaining, and there were a few jaw-dropping moments. More and lots of photos after the jump... 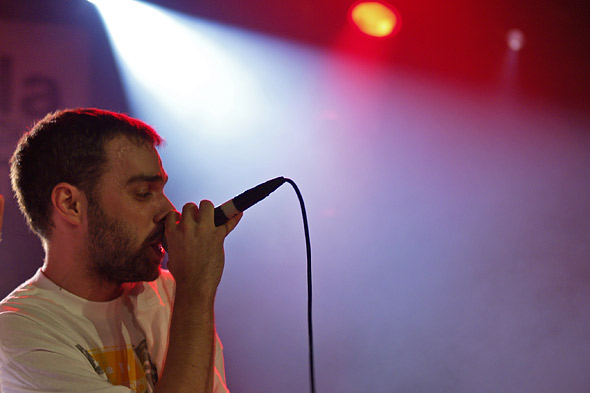 Kickass intermission performances by Notes To Self (featuring the one and only DJ Dopey), Double Dragon, and long-time Toronto champ M-Kutz kept the crowd going between competition sets. 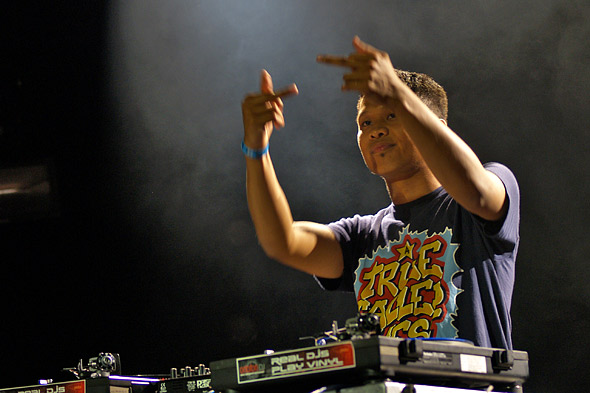 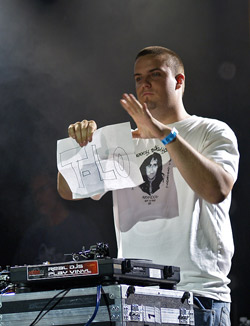 Most memorable moments included Calgary's C-Sik dropping a most awesome, crowd-poking "fuck T.O., fuck Montreal..." intro. In another attempt to get a rise out of the crowd, at the end of his set DJ Trapment ripped up a TLO sign he'd drawn, enticing the crowd into a booing frenzy.

But in the end, it was Kitchener/Waterloo regional champ SHUB who came out on top. His set was characterized by some dirtay dirtiness, was majorly skilful, nearly flawless, and got quite the rise out of the crowd. In his short acceptance speech, he promised to represent Canada with his best at the world finals in the UK in October.

Second went to TLO, who certainly had the audience backing him. Clearly disappointed in his loss, he reminded us that his set was free of profanity (which doesn't fare into the scoring, unfortunately).

Third went to G-NUIS who by far displayed the best stage presence of the night. He warned that he'd be moving to Toronto soon, and that he'd be back to win in 2008 and if he performs like he did this time I think he's got a real shot.

(Trapment riles up the crowd by dissing TLO) 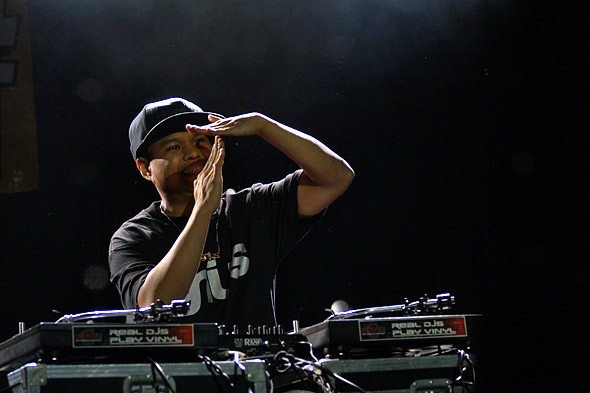 (G-NIUS does a T-dot freeze) 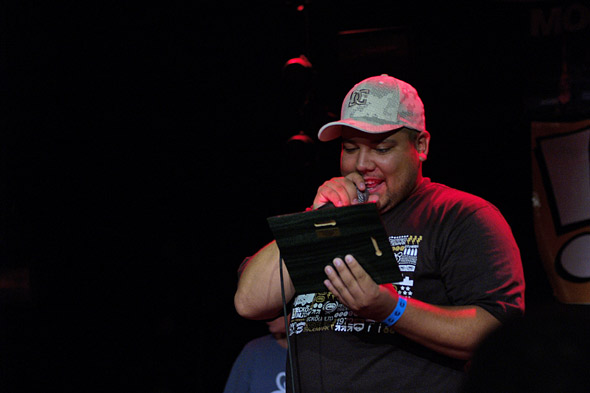 TLO was most certainly the crowd favourite, which is perhaps why I was rooting for him. While I wasn't privy to the judges scoring, I did feel that there were better overall performances. Had I been asked to give my top rankings, based solely on how much I enjoyed the sounds and styles of the performers, I think I would have had a tough time deciding between G-NIUS and TLO for tops, but I'm pretty sure I would have scored them both higher than SHUB. The judges have a much better ear and eye for the technical aspects that I do, no doubt.

Best of luck at the world finals, SHUB! Do us proud!

(All photo by Jerrold Litwinenko)