Yummy Market is the largest Eastern European supermarket in Toronto. While its location (on Dufferin between Finch and Sheppard) is not the most accessible by public transportation, the food definitely makes up for the hurdle.

Eastern European food is famous for its cured meats, pickles, baked goods, sweets and dairy products. The market is known for its home-made foods, locally made organic products, and goods imported from Russia, Lithuania, Estonia, Poland, and other countries. 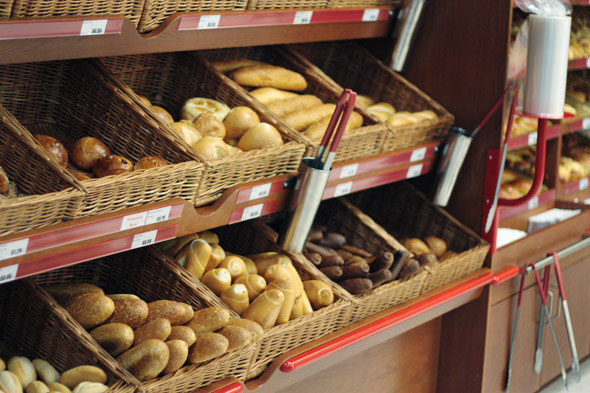 The market features an on-site bakery that outputs a variety of baked creations, ranging from familiar to the western palate baguettes and loaves, to traditional Eastern European and Middle Eastern pastries, such as pierozhki that come in variety of sweet and savory fillings and eastern-inspired bourekas. The bakery works during the day so if you're lucky you may catch the batch of fresh-out-of-the-oven goodies. 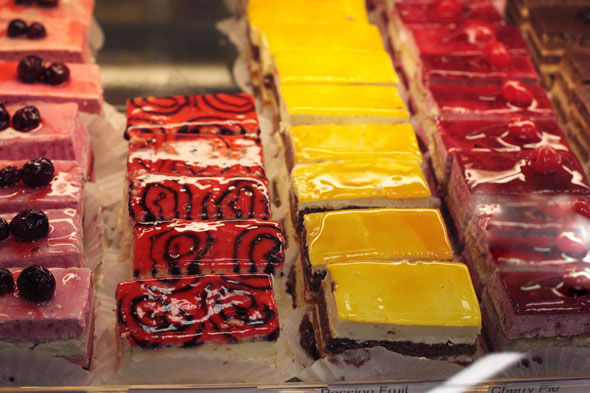 Right next to the breads lies the sweets section, ready to rival any Portuguese bakery with the wildness of colours and flavours. Beneath the top vitrines with the bright-coloured bite-sized baked beauties the lower floors are taken by the mouth-watering cakes of all shapes and adornments, which can also be made to order and signed with any message.

Next up, the cheese section, a good half of which is occupied by a soft cheese called tvorog. Tvorog is very similar to cottage cheese, but not as salty. It comes in both sweet and savoury versions and is occasionally mixed with dried and fresh fruit. Tvorog is every Russian pre-schooler's nightmare as it is a very popular children's food, kind of like broccoli in Canada. I confess that I went through some rough patches with tvorog too, but now we are best of friends it makes an absolutely lovely and healthy breakfast.

Right next to tvorog, the freshest goat and ewe cheeses rub elbows the small globes of young mozarella. 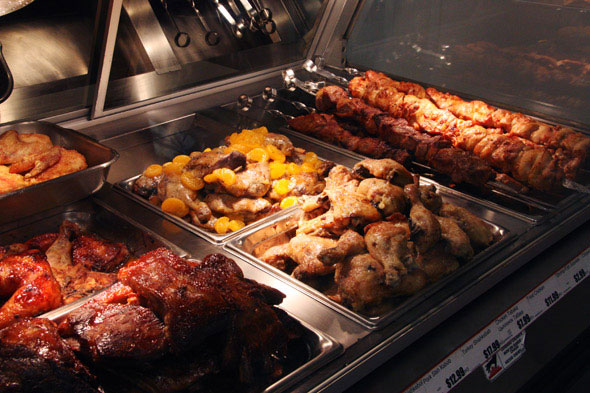 In the deli section, the variety of cured meats and sausages easily beats my other favourite store - European Quality Meats and Sausages in Kensington Market. Those lost in the selection can rely on the friendly enough staff for advice. My favourites are the hunter's sausages - long dry salty sausages that come in spicy and non-spicy flavours, and doktorsakya kolbasa (it looks somewhat like ham) - great as is, in sandwiches or substituting for ham in salads; or pan-fried as a healthier stand-in for bacon in bacon and eggs combo. 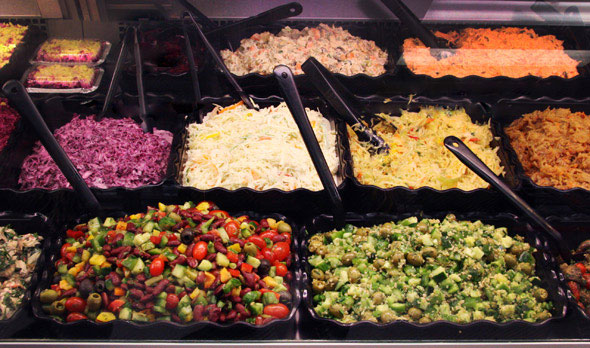 My absolute favourite part of the store is the salads and pickles section. It boasts a wonderful hodge-podge of eastern and western pickles, salads and aspics made of everything from cabbage, garlic sprouts, bell peppers, to cheese, herring, and pickled meats.

Eastern European food lays on the cross-roads of Middle Eastern, Far Eastern and French cooking traditions, and often has foods familiar to those kitchens but made in a uniquely Eastern European manner. Kim chi is a great example. Originally brought from Korea and cross-bred with German sauerkraut, it took very well on Russian soil and now is an extremely popular pickle.

For the adventurous, the display offers many other Korean and Japanese inspired dishes - seaweed, seafood, and a variety of other pickled salads similar in technique to kim chi but with different ingredients. 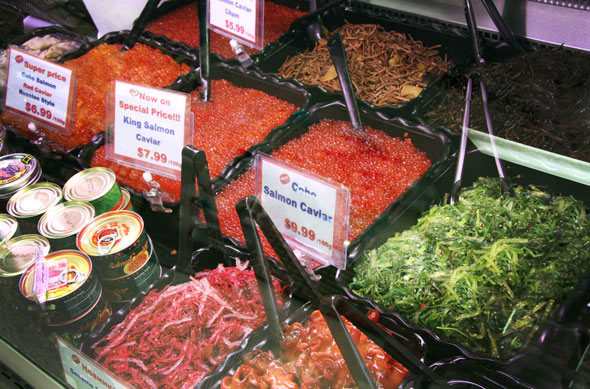 Herring dishes deserve a separate mention. There is herring pickled and marinated a million different ways: in wine, oil, tomato juice or mayonnaise, or mixed with beets and eggs in the shuba salad, and ground to pate in forshmak. Right next to the herring are trays with caviar ranging from very expensive to very affordable, flanked by smoked fish of all sorts. 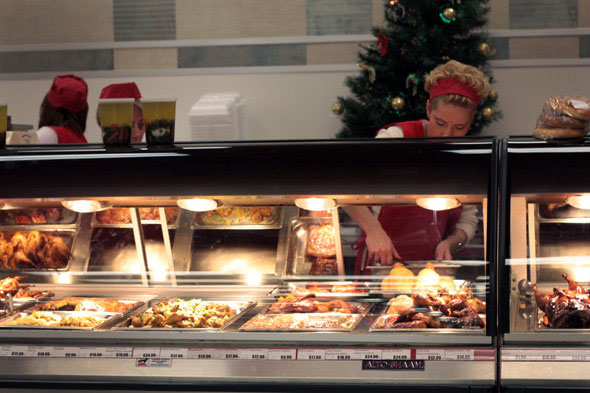 The prepared foods section is full of heart-stopping cooked meats, poultry, fish and vegetables. The most popular item is "the meat the French way" (myaso po francuski) which has nothing to do with France, and is actually pork baked with potatoes, onions and mayonnaise. The prominently-displayed sign on the display advertises whole roasted lambs and suckling piglets that can be made to order. The tubs of borsch, solyanka, and other soups stand nearby, ready to be taken home and re-heated. 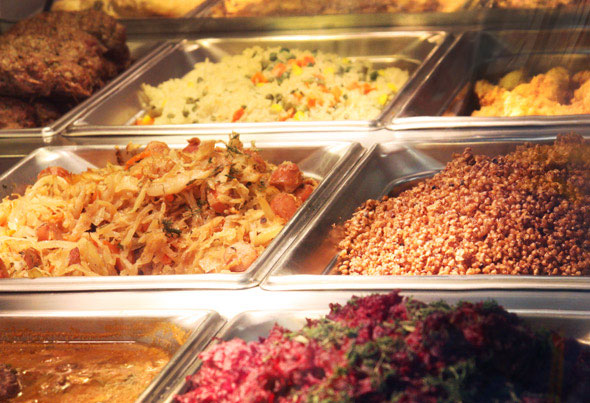 As far as frozen foods, a good half of the section is comprised of perogies with everything from potatoes, cheese, and meat to black currant to sour cherry, to stuff you had no idea could be stuffed in perogies. 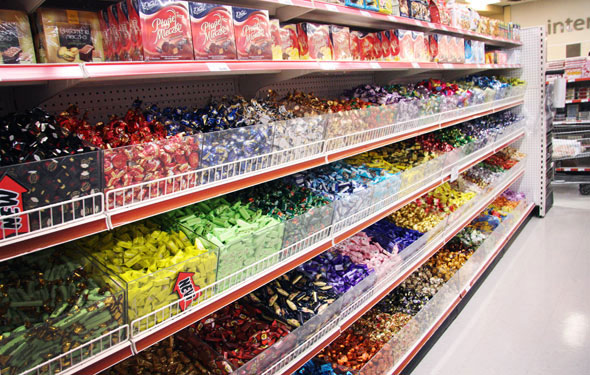 If all those treats aren't enough, the gluttons can indulge further in the aisle wholly dedicated to candies and chocolates, and swing by another aisle for pickles and yet another one for teas and juices, and finish at the dairy section with a gazillion of varieties of yogurt and sour-milk products.

Yummy Market is open daily 9-9, including public holidays, and Christmas Day. It does close on Easter European holidays though, which are New Years Eve and New Years Day and Orthodox Christmas Day (January 7).

Writing and photos by Maria Kubysh