Tokyo Smoke on Yonge is a cannabis store selling 125 strains of weed and a big selection of sleek stoner accessories.

Taking over the iconic HMV building anchored at the corner of Yonge and Gould—north of YDS, the busiest intersection in the city—it's the first outpost of the cannabis brand to legally sell weed in the city. 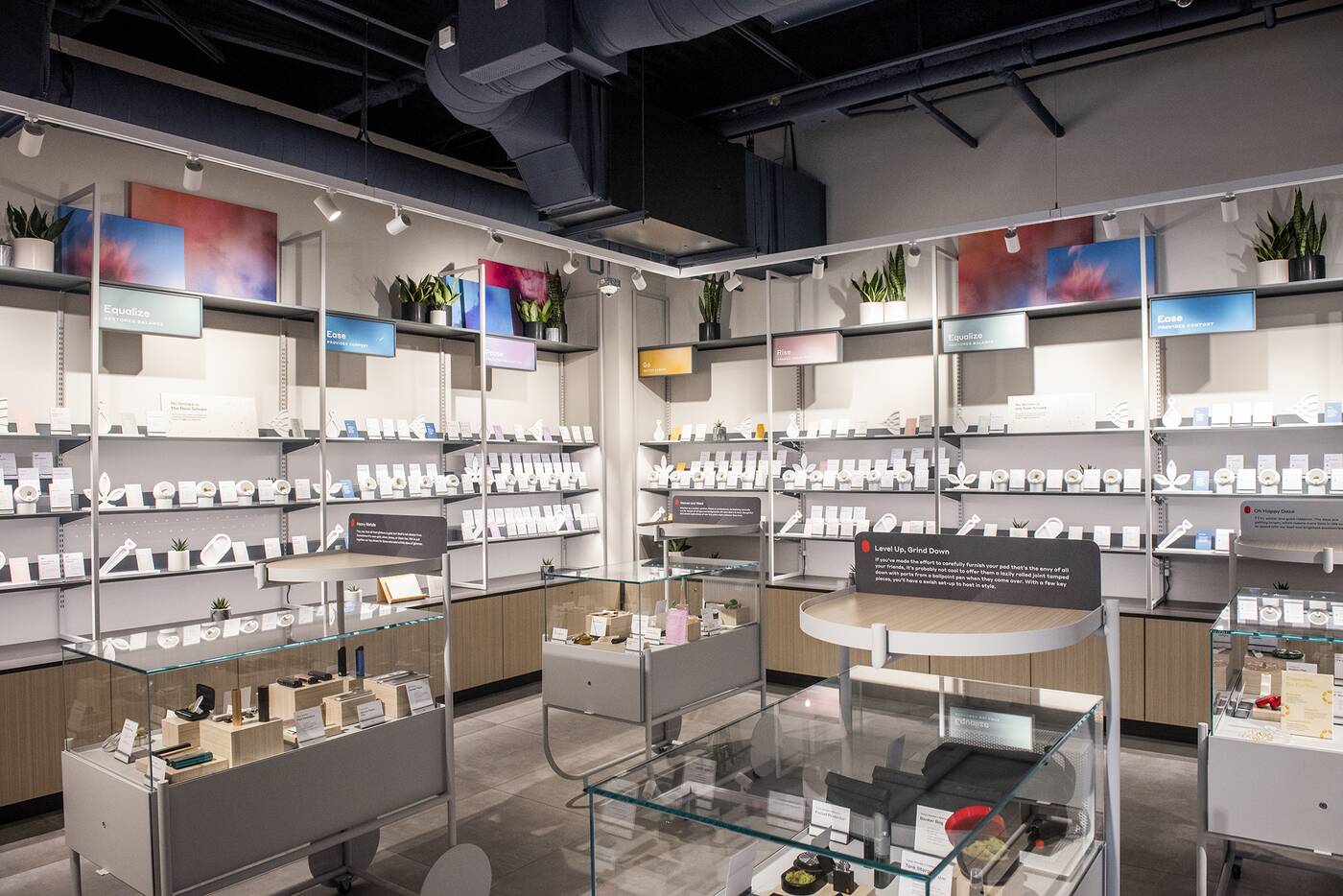 Given that the 333 Yonge St. building rises three floors-high, this store is undoubtedly the largest and most significant Toronto outpost of Tokyo Smoke so far. 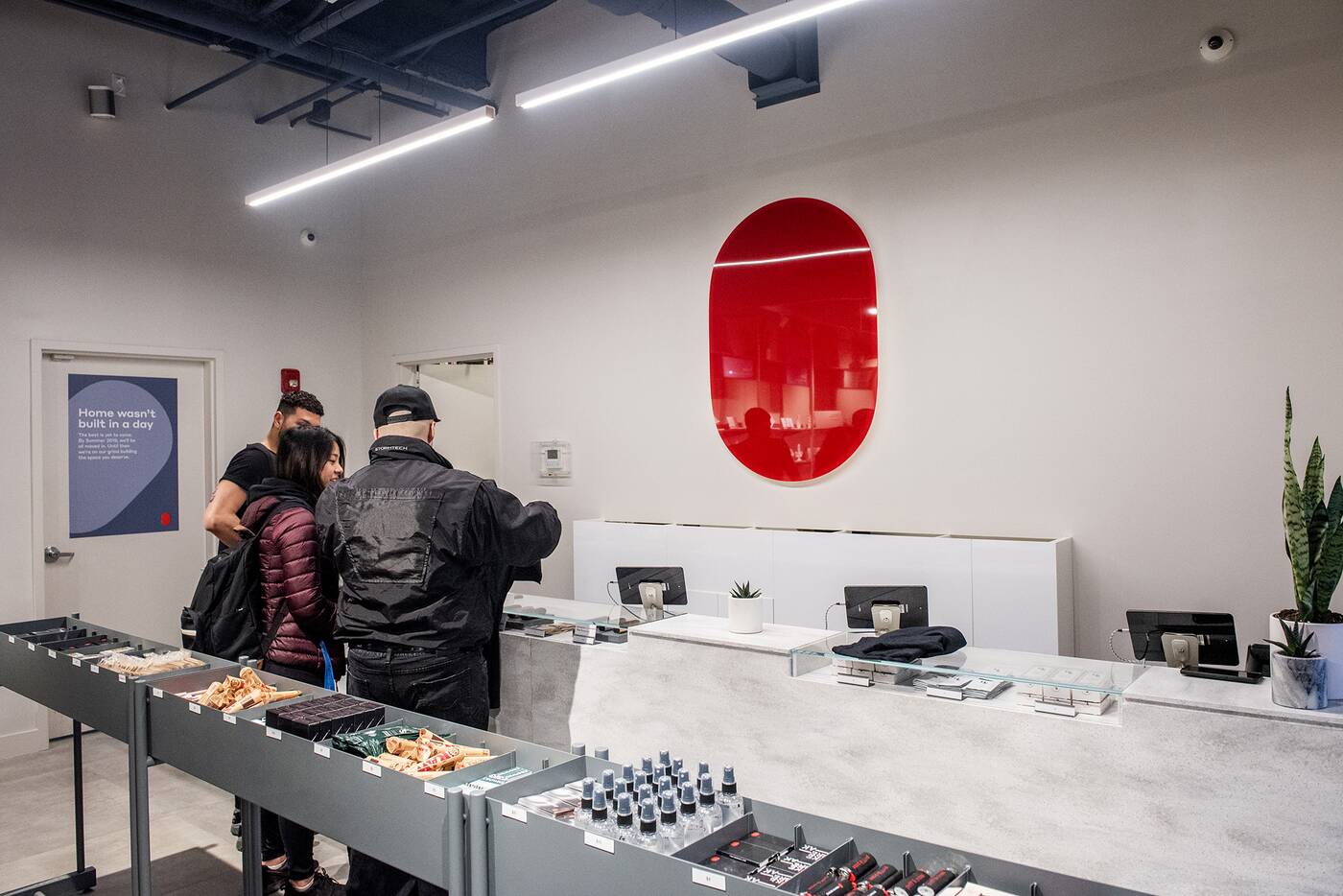 It's not all open yet, though: right now, the actual store only encompasses 1,500 square feet of the first floor, with 5,000 more still under construction. The two upper floors are slated for something that owner Colin Campbell has yet to reveal. 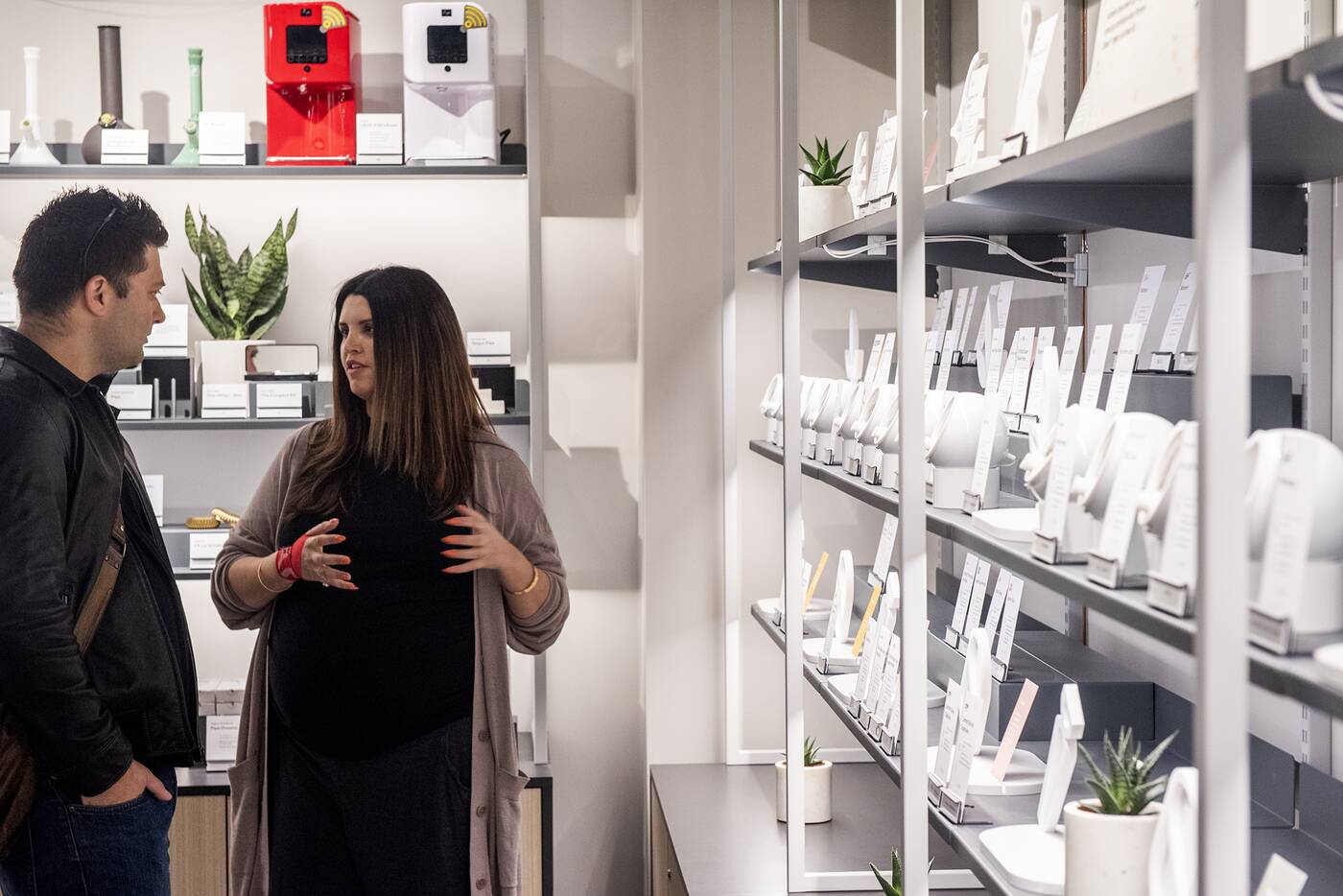 In the meantime, the store feels surprisingly snug. Considering it'll become the go-to for Ryerson students (and more than 200,000 pedestrians who walk by Yonge and Dundas daily), it might be a squeeze. 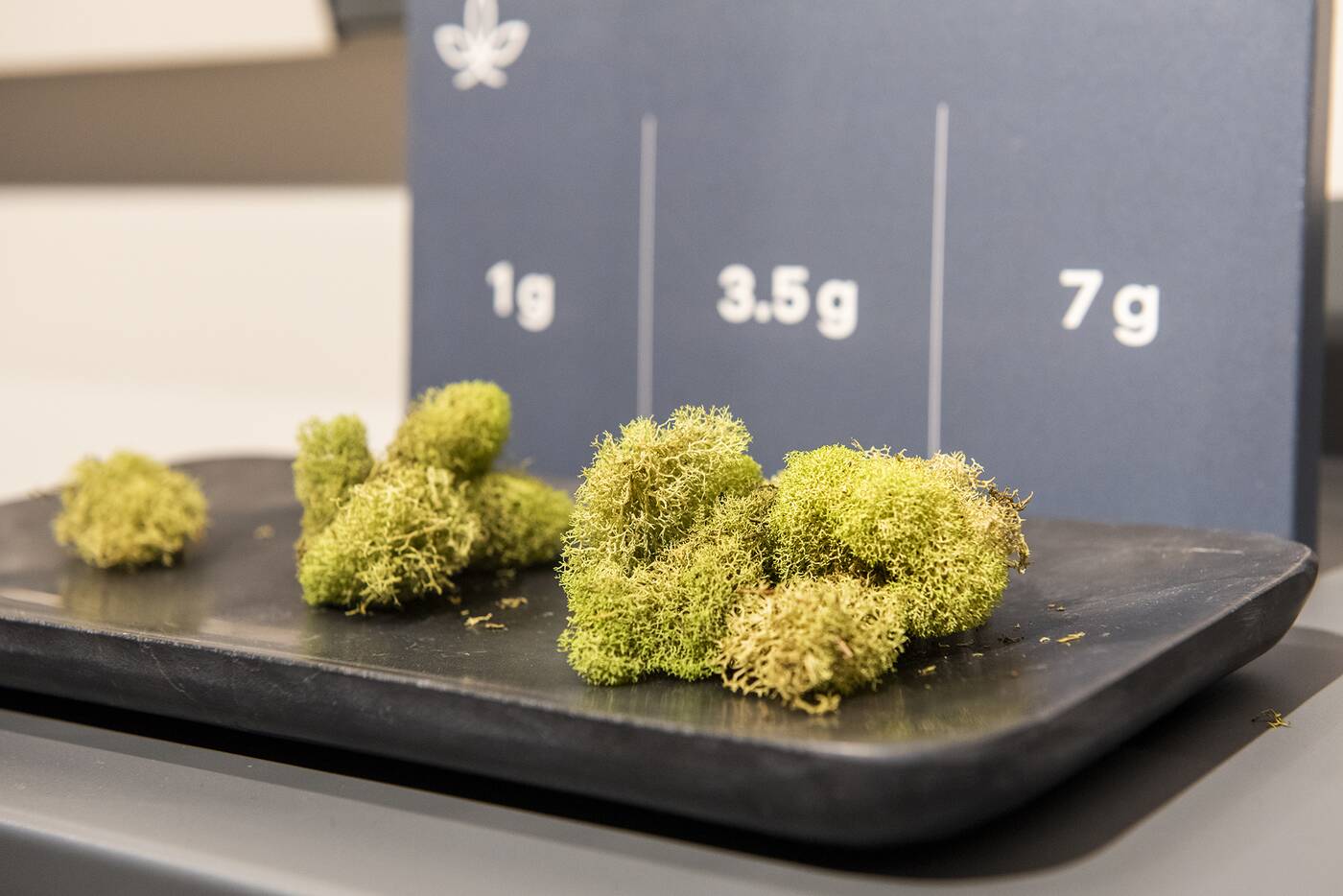 Product here is divided by 'intent' rather than strain types. For people who aren't familiar with the effects of sativa, indica, or hybrid weed, categories such as Go, Ride, Equalize, Ease, and Pause, are easier to identify with. 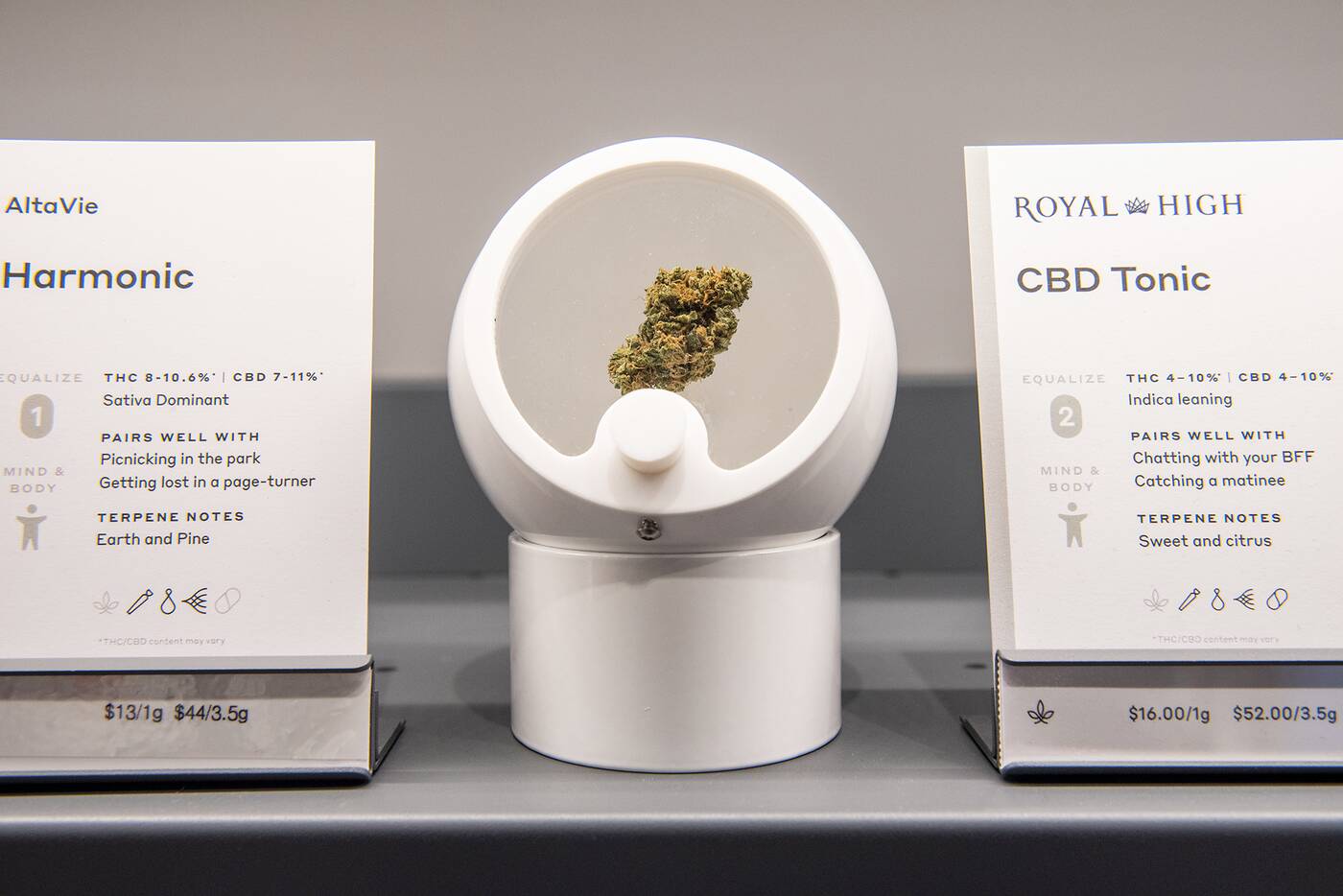 On top of that, product is rated on a scale from 1 to 3, going from most newbie-friendly to more appropriate for advanced users.

Sections are split into three shelves: sprays and oils go on top, bud is in the middle, and on the bottom, pre-rolled joints and capsules.

Unlike the other weed stores in the city, everything here is surprisingly analogue. There are no iPads, or giant kiosk screens for customers to scroll through. 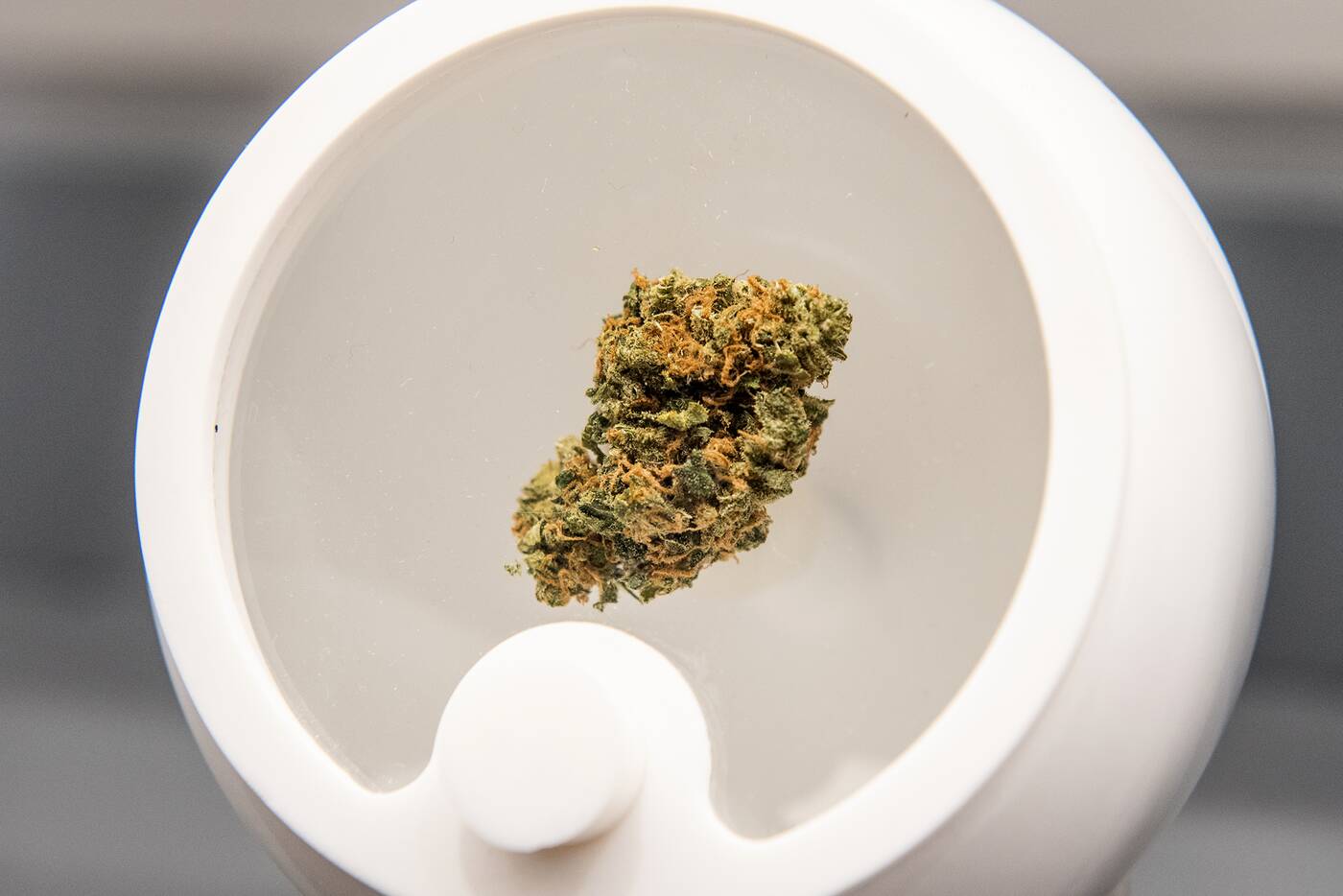 Instead, details ahout weed from the usual LPs like Edison, Trail Blazer, Broken Coast, and Tweed (as well as five of Tokyo Smoke's own strains) are displayed on good old-fashioned signs. 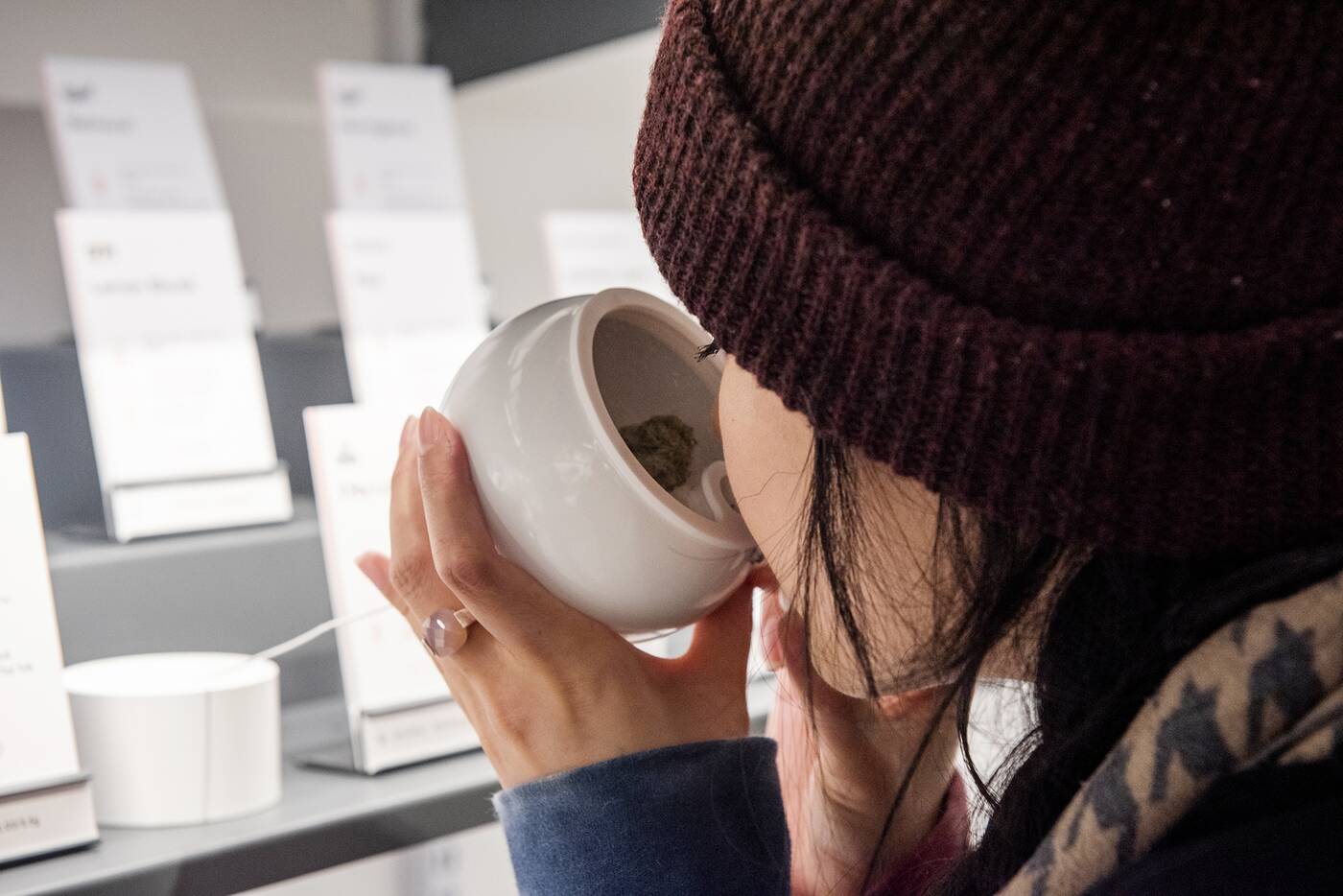 The sniffing pods, or 'scent orbs' which were designed by Toronto-based firm Castor Design, are also way nicer than at other weed stores, offering up bud floating in the centre rather than shaking around willy-nilly. 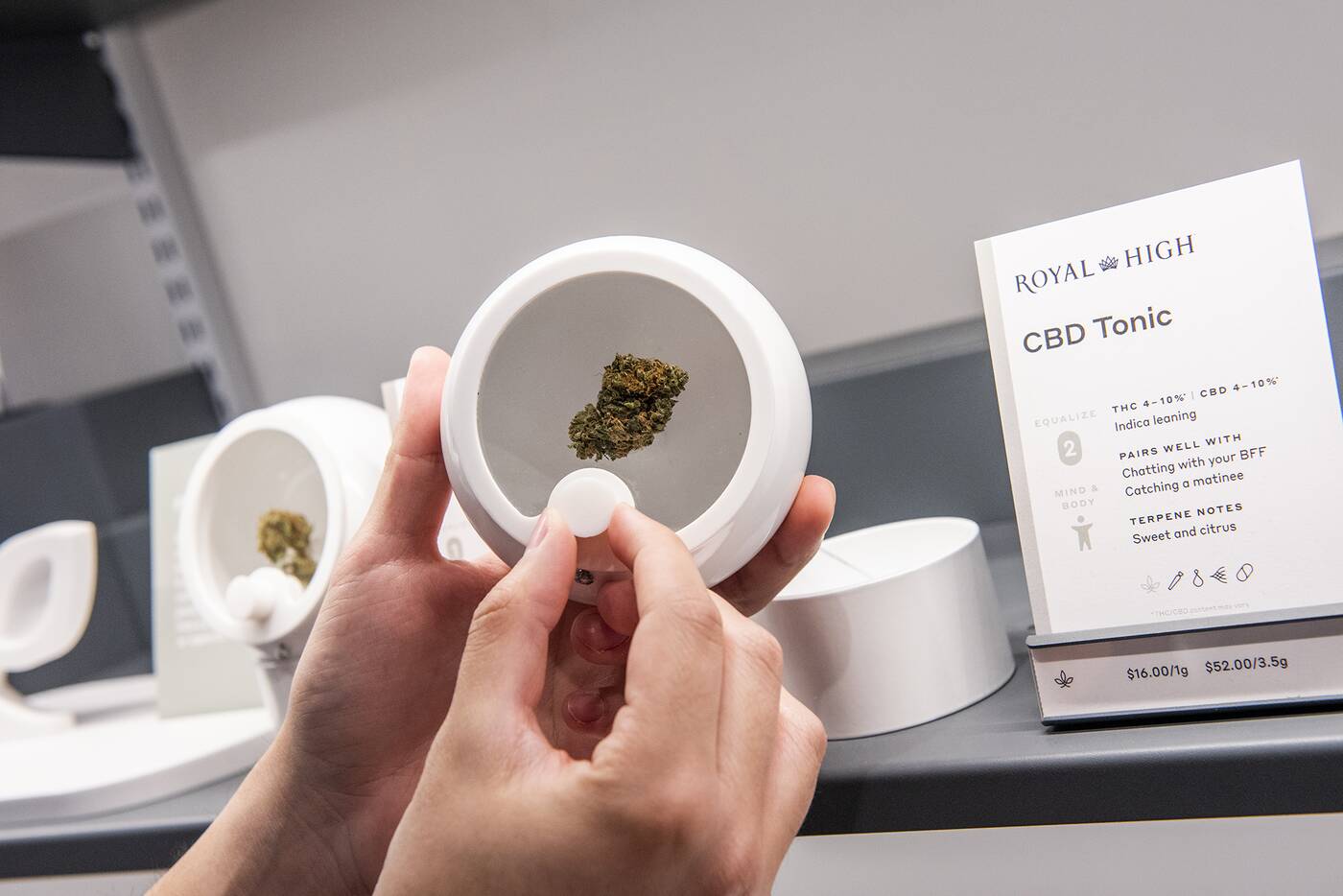 Prices vary (there are pre-rolls as cheap as $5), but from what I can see, range from standard expensive LP costs to prices that are fairly competitive with black market weed. 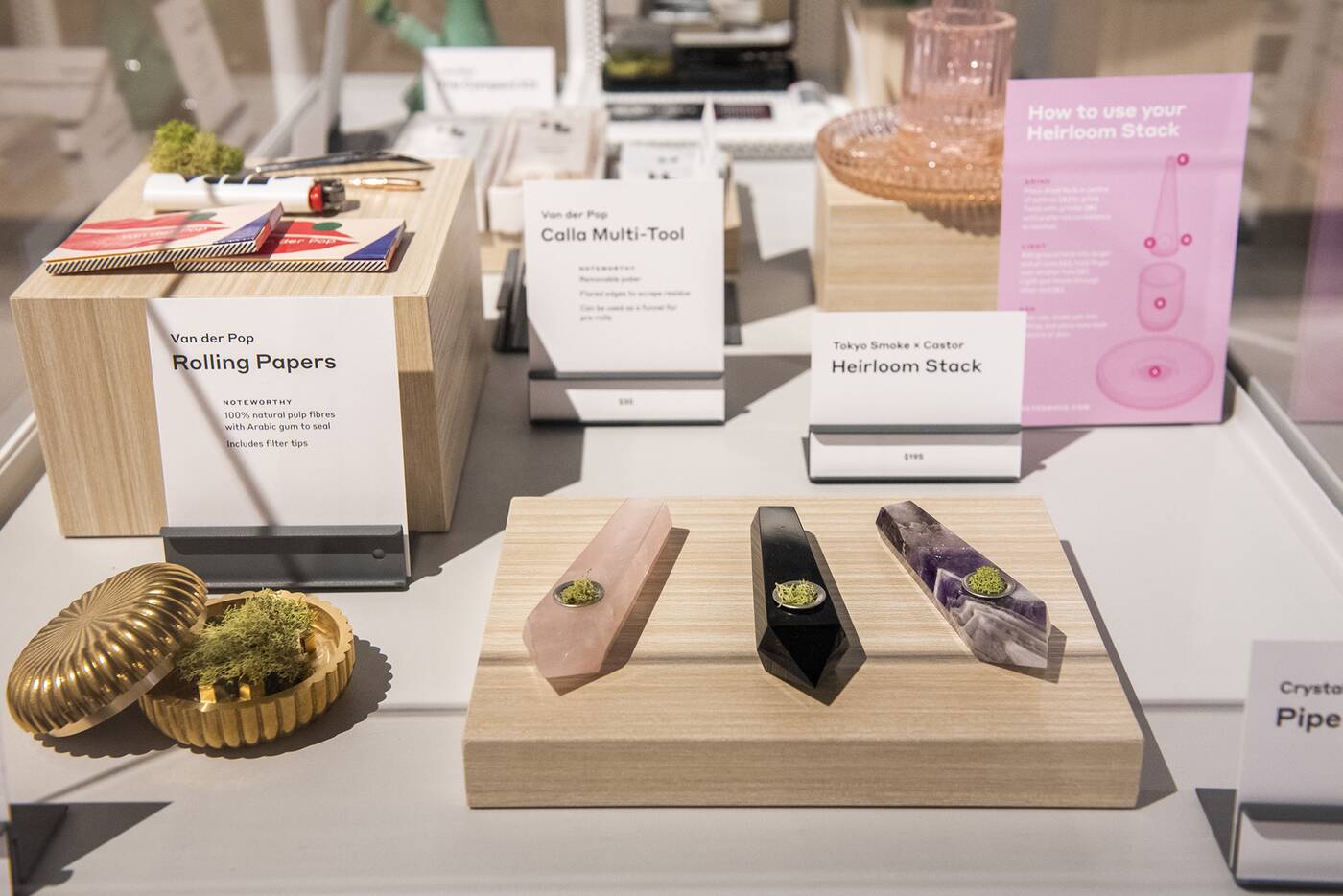 Since Tokyo Smoke first launched in 2015 with a cafe-meets-head shop concept, it's unsurprising what makes Tokyo Smoke really stand out is the selection of accessories the brand has always been known for. 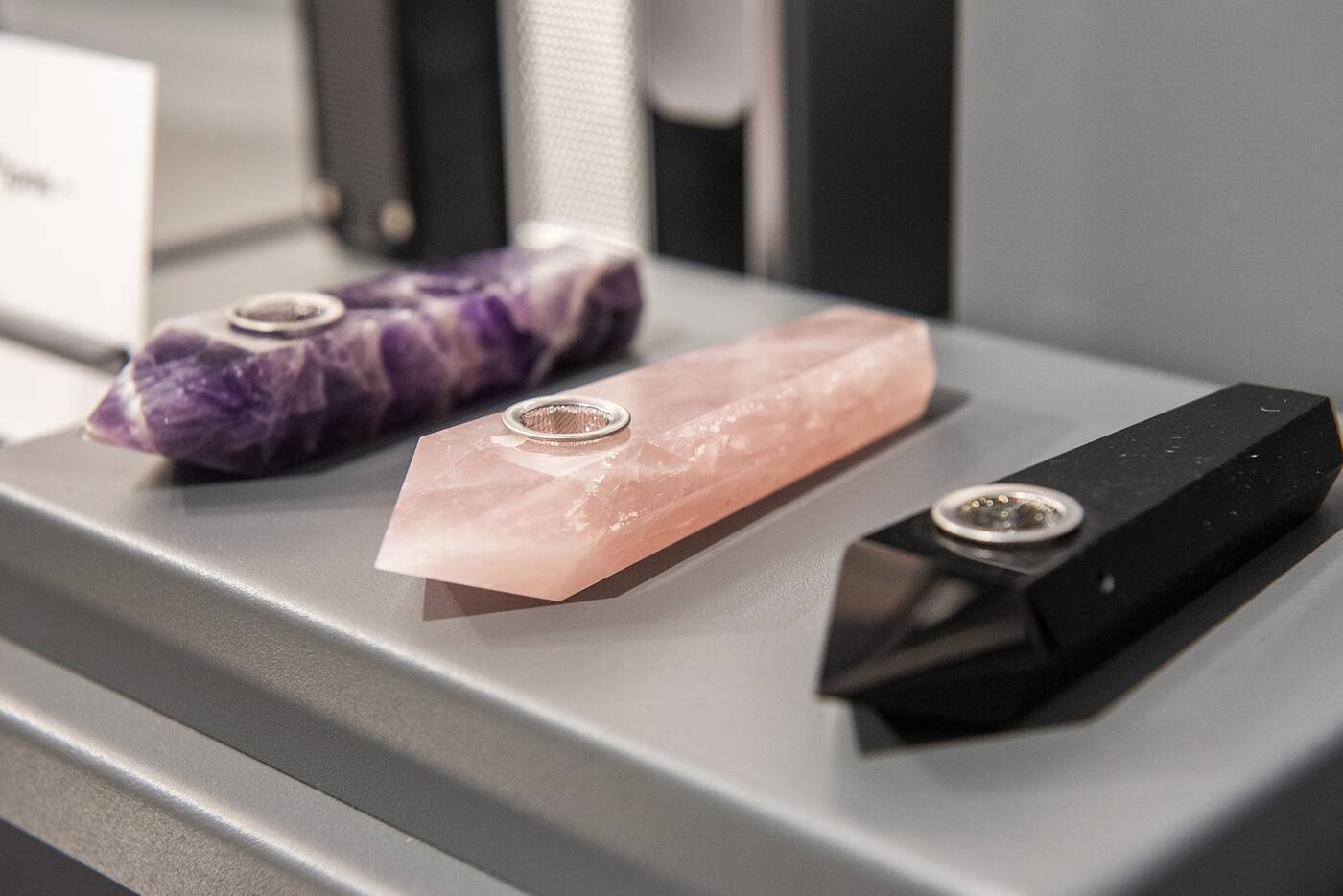 Displayed on the walls, product shelves by the cashier, and 'bud carts' around the store is an array of elegant smoking gear from brands like 48North and self-touting female-focused Van der Pop that beats the usual high school pothead aesthetic. 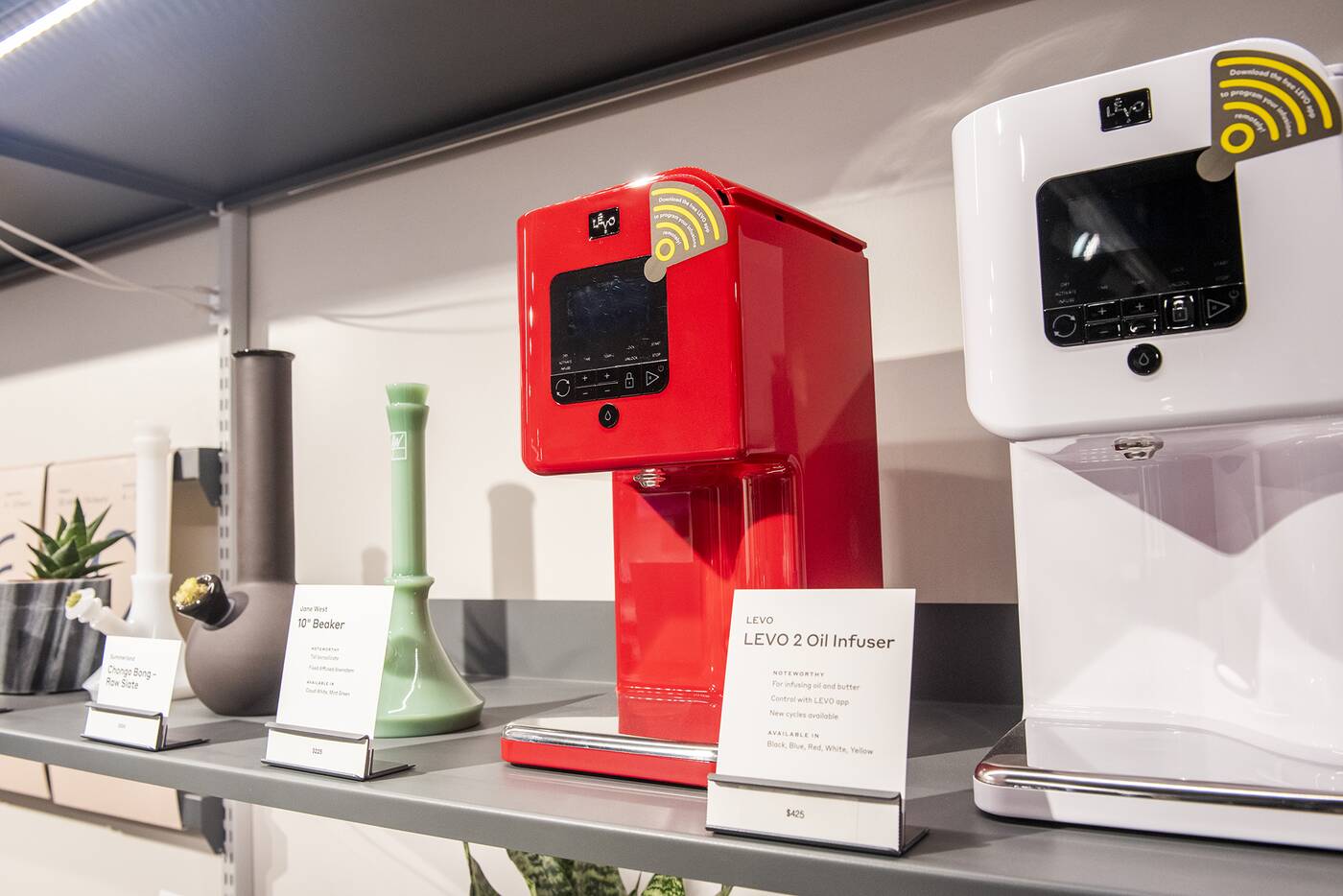 There's a sleek Chongo bong from Summerland ($300), the self-identified purveyor of 'stonerware', Levo 2 oil infusers ($425), and an automatic Otto grinder from Banana Bros ($170). 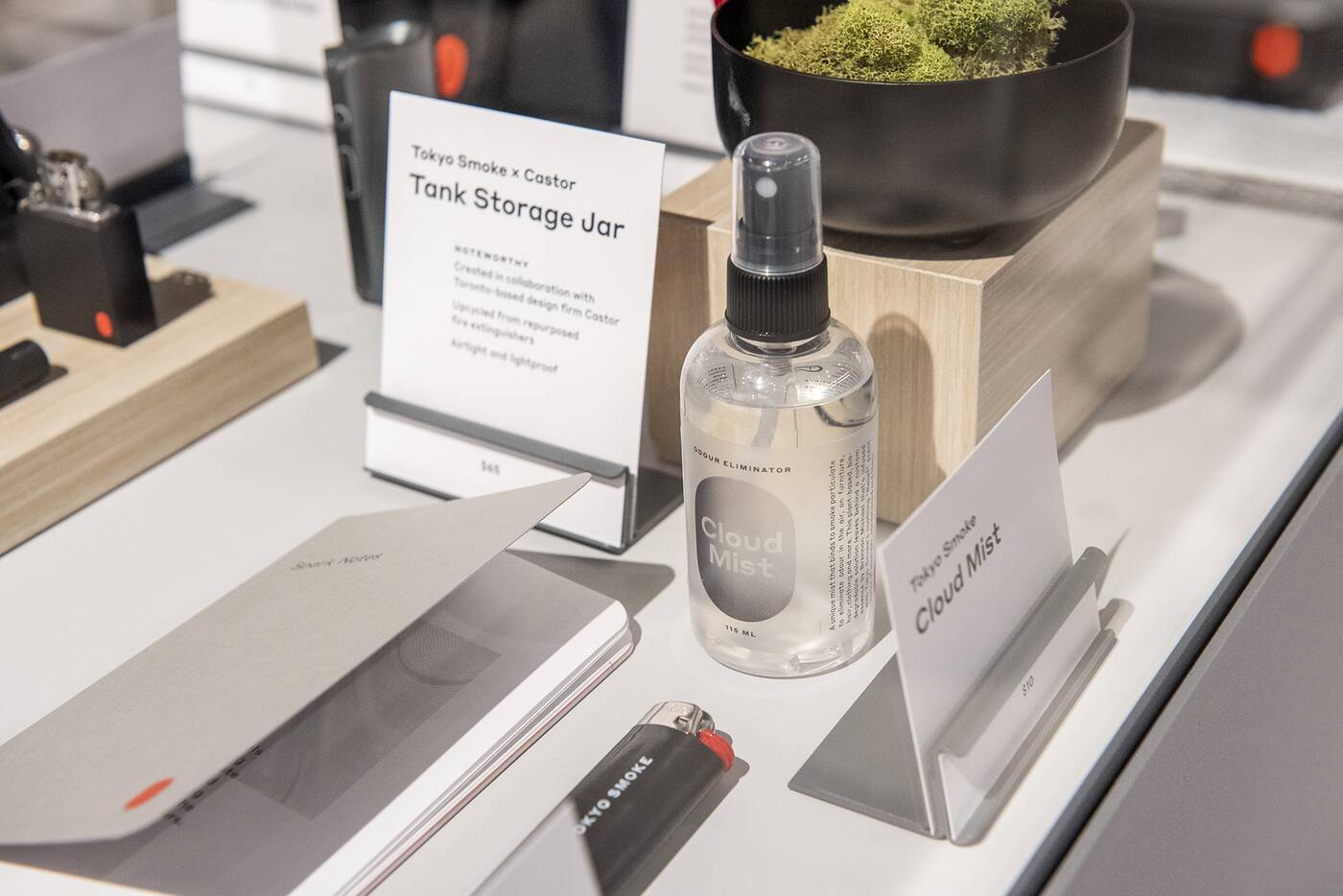 Tokyo's own signature gear, like their super handy Supreme Clean Kit ($30), which comes with tools like a brush and pipe.

Their Cloud Mist spray ($10), which eliminates puff-puff-pass odours with its scent-binding particles, is another popular product. 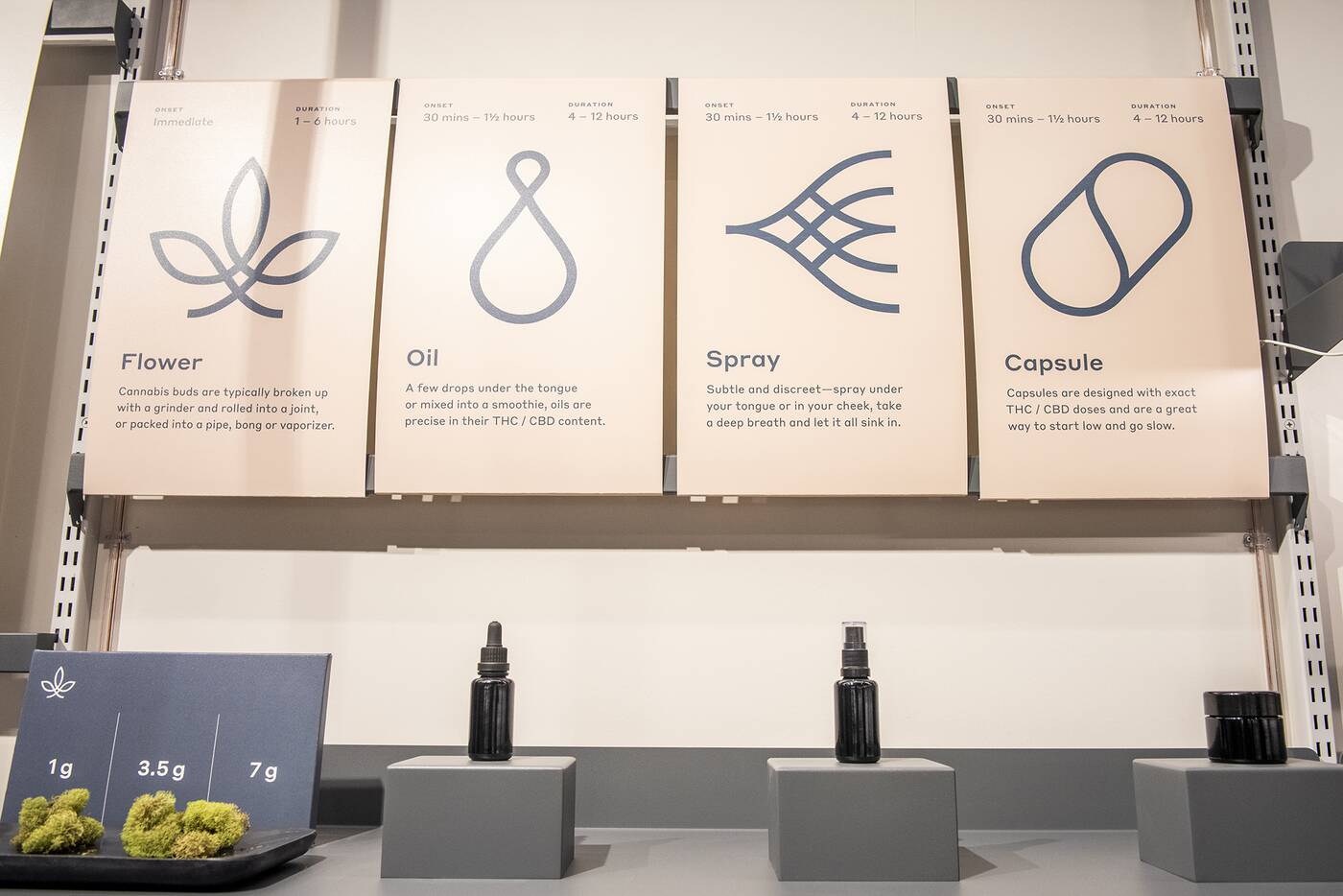 Tokyo Smoke's brand has already been around since 2015, so it's not hard to add the brand to Toronto's weed-smoking lexicon. 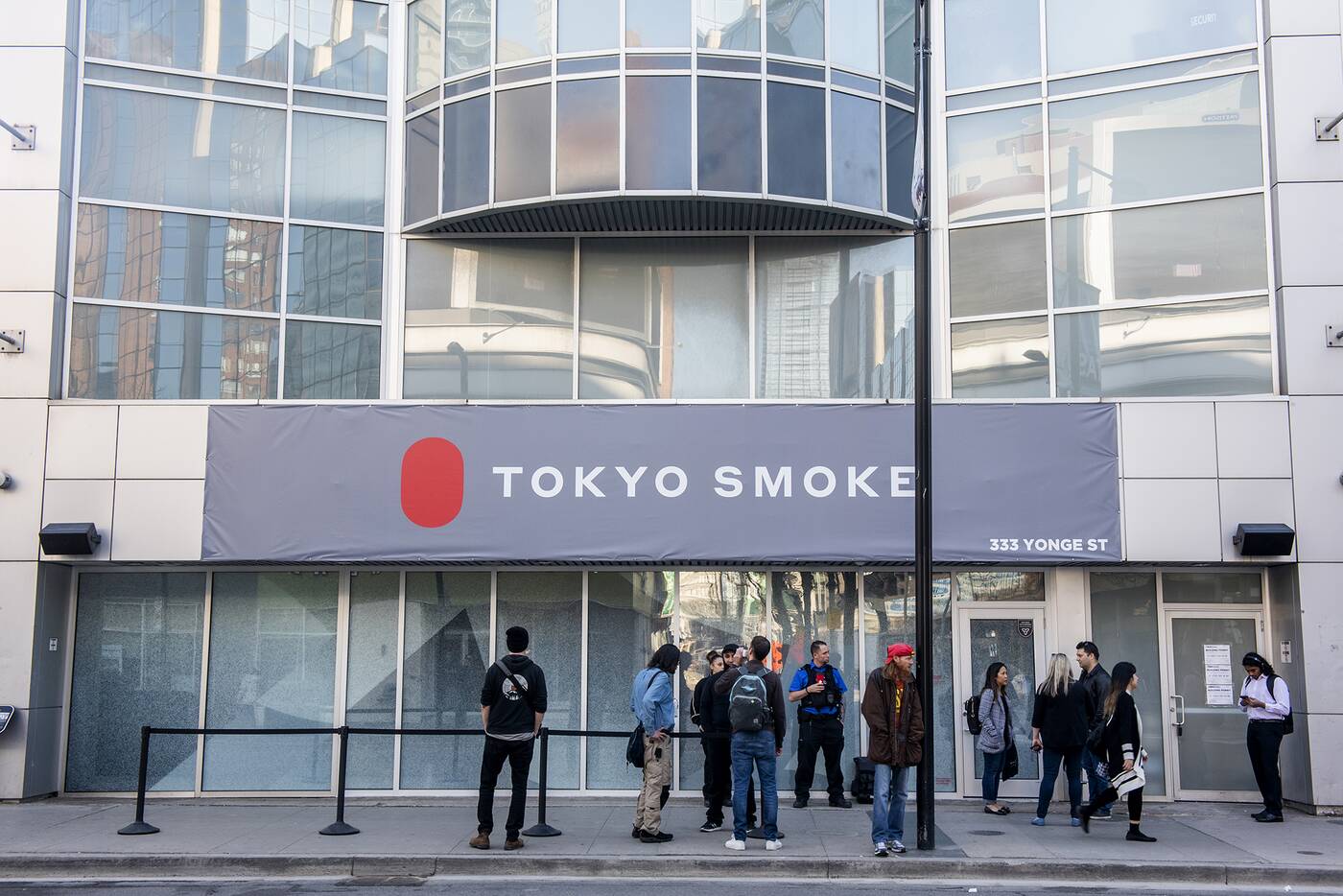