Affinity Fish is a Dundas West fishmonger specializing in sustainable Canadian freshwater fish that also operates as a private event and ticketed omakase experience on the weekends.

Industry veterans Jon Klip and Matt Taylor are behind the store's unique hybrid concept. In addition to training in Kyoto, Klip worked at Tosho Knife Arts while Taylor spent time at Ursa, Actinolite, Shoushin, and Restaurant Pearl Morissette, before taking the helm at Sakai Bar. 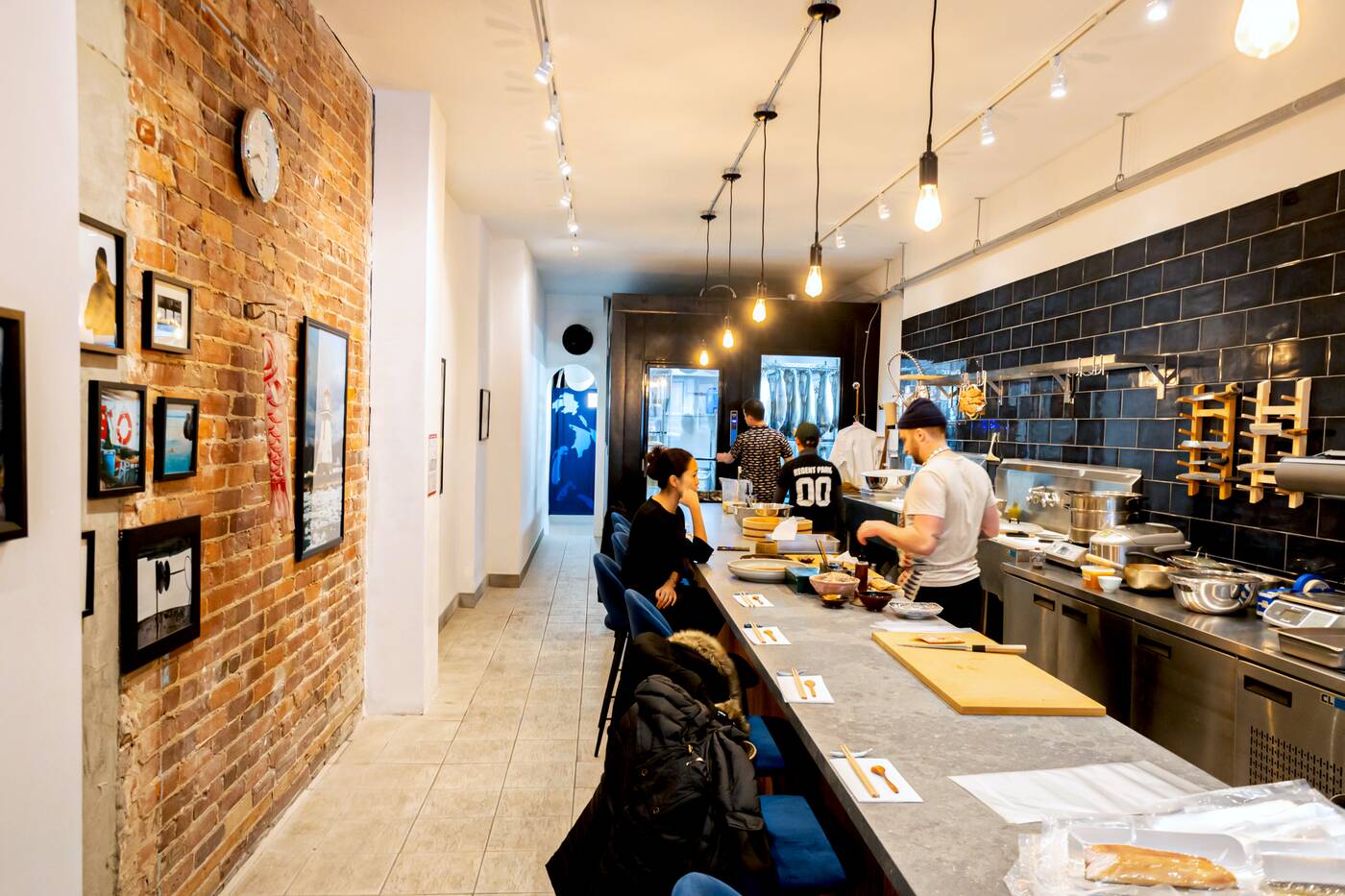 Unlike other fishmongers, the store has a soothing, minimalist look without the stereotypical display cases and smell. Despite the restaurant-like design, this is a fish store.

Outfitted with a couple standing fridges and a board with the day's feature fish (and their price per 6-oz. portion) displayed in the front, it's the composite stone-topped bar stretched through the long room and whole fish hanging in the rear dry-aging fridge that draws the eyes. 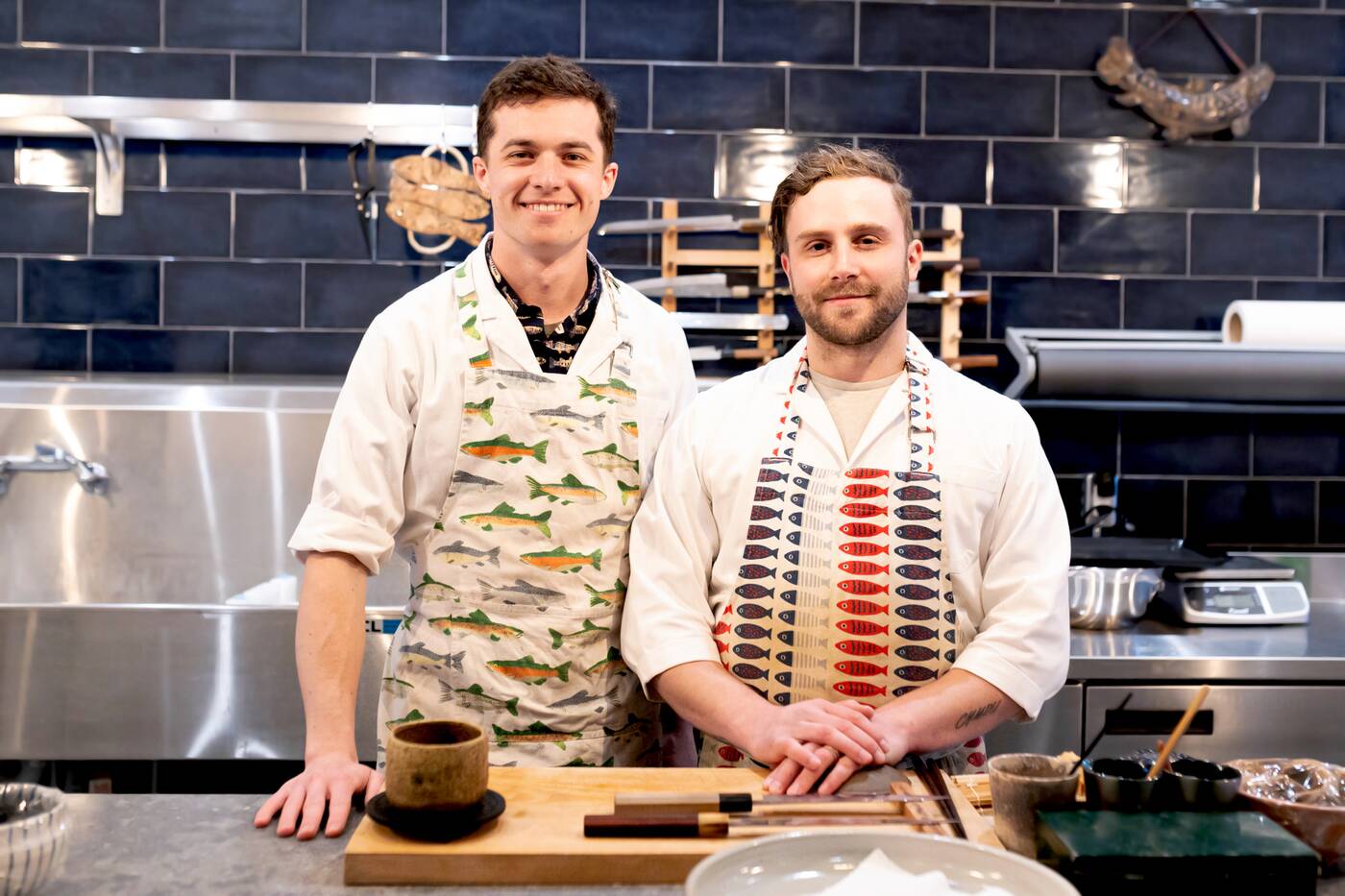 This is where Klip and Taylor work, processing whole fish into filets for retail or preparing menu items for their dinner experiences. 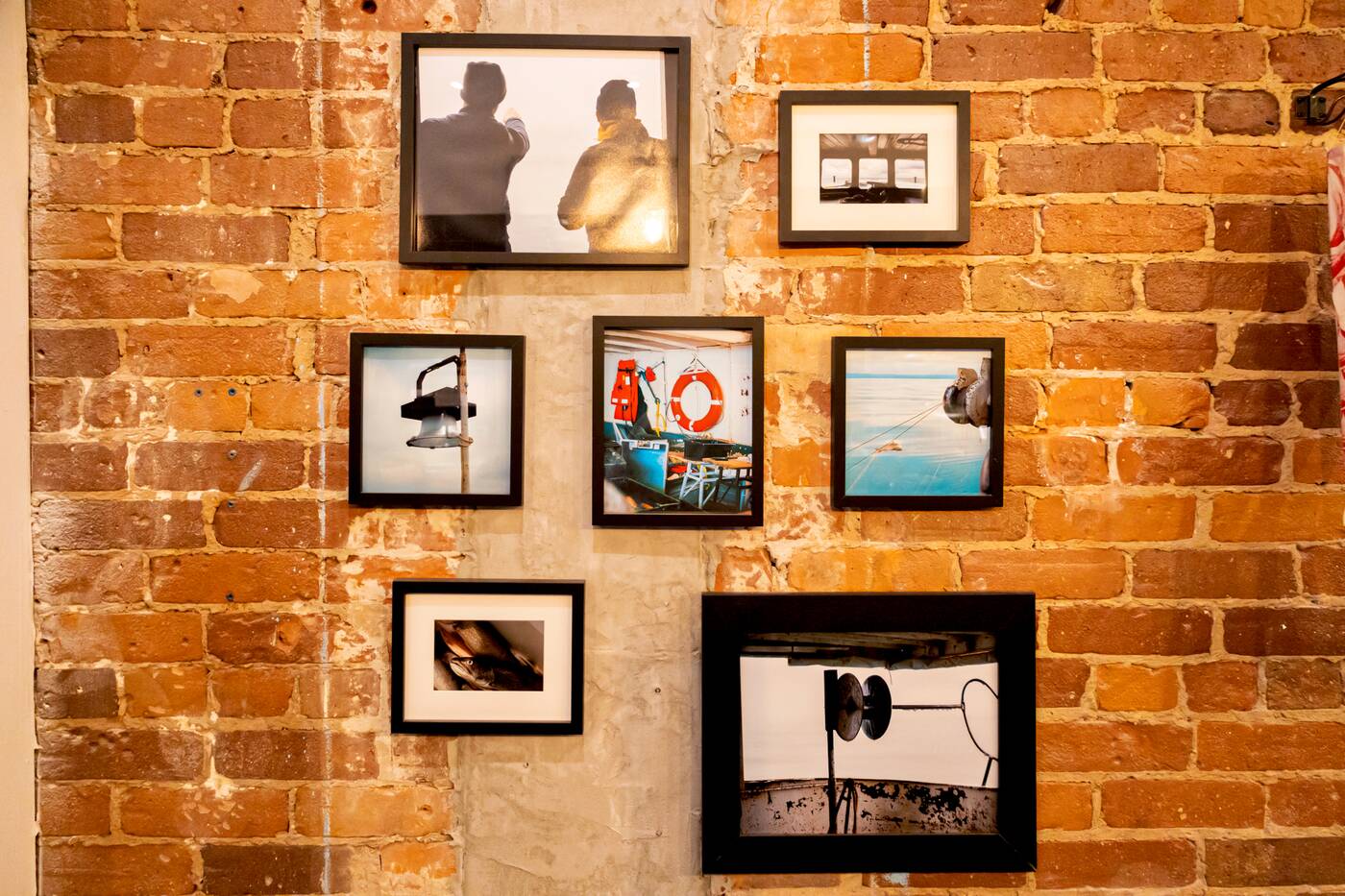 Unlike many others who import their seafood, Affinity Fish's focus is strictly on seafood sourced closer to the city, through direct relationships established with local and Indigenous fisherfolk in Lake Huron and Georgian Bay. 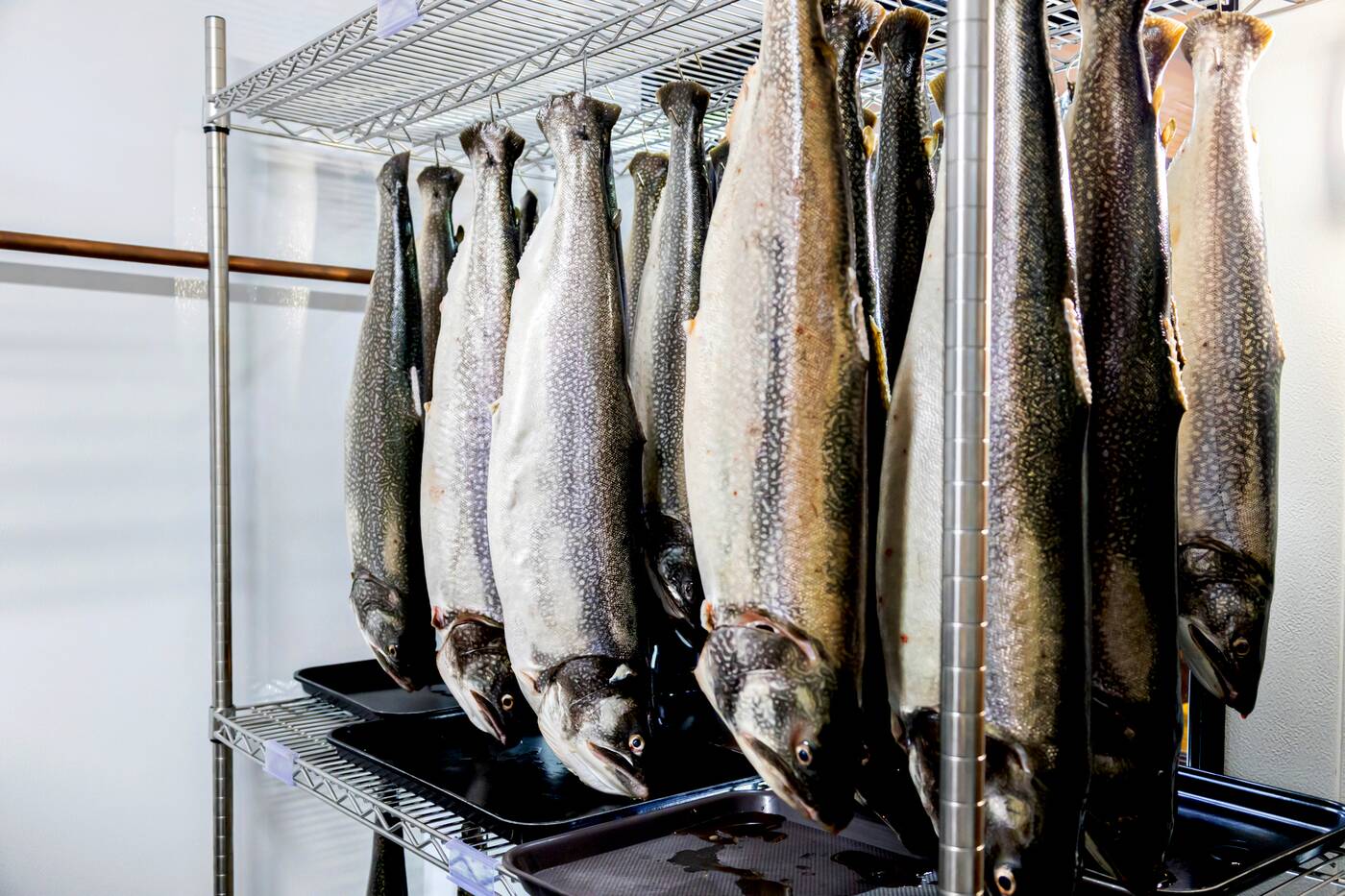 The fish sourced from the Great Lakes have all been harvested through ikejime. The latter is a traditional Japanese method of preparing fish by paralyzing and then draining it of blood to avoid rotting.

It is considered the most humane and direct way to dispatch fish. The method also ensures the best flavour and flesh texture (firmer). 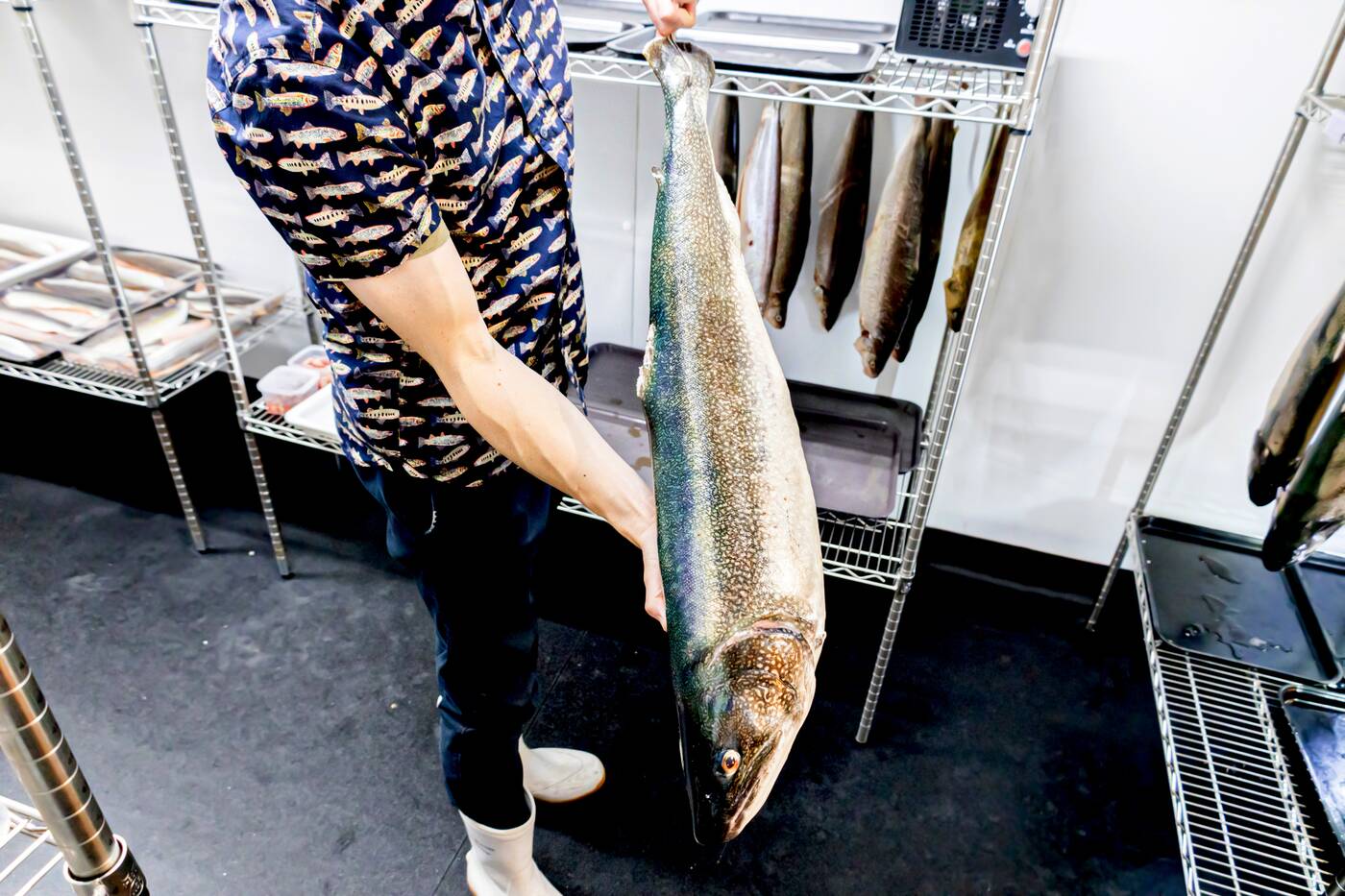 Fish treated this way rot slower (in contrast, commercial fish generally die from suffocation with flesh tainted by blood pooling), which means they can be aged and develop complex flavours like aged red meat. Most fish prepared this way are sold to high-end restaurants. 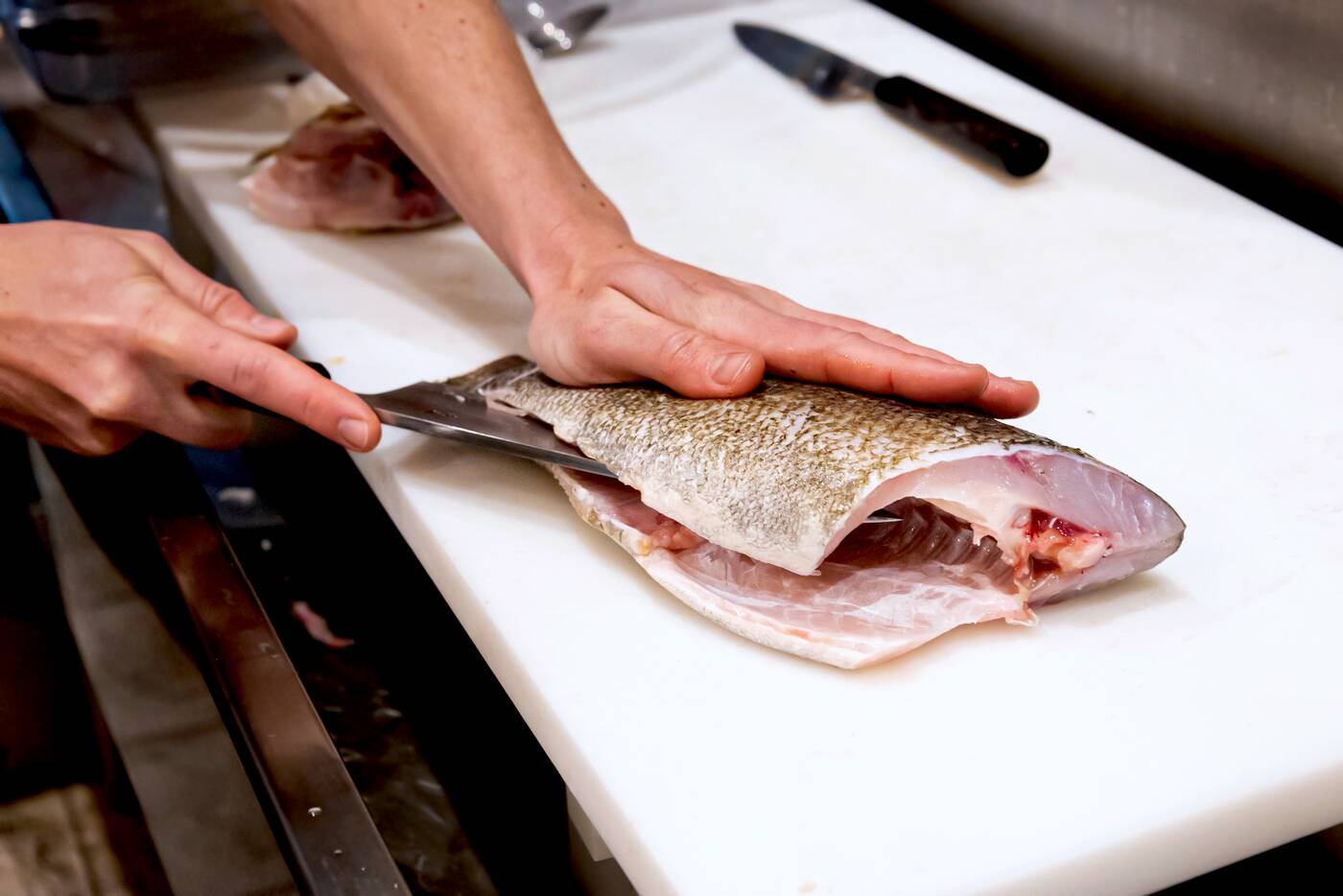 Prior to Affinity, there wasn't a vendor in Toronto that was selling freshwater fish that had been processed by ikejime.

The duo is changing the narrative and applying this process to a number of Great Lakes fish such as lake trout, smallmouth bass, walleye or pickerel, whitefish, and burbot, a freshwater cod. 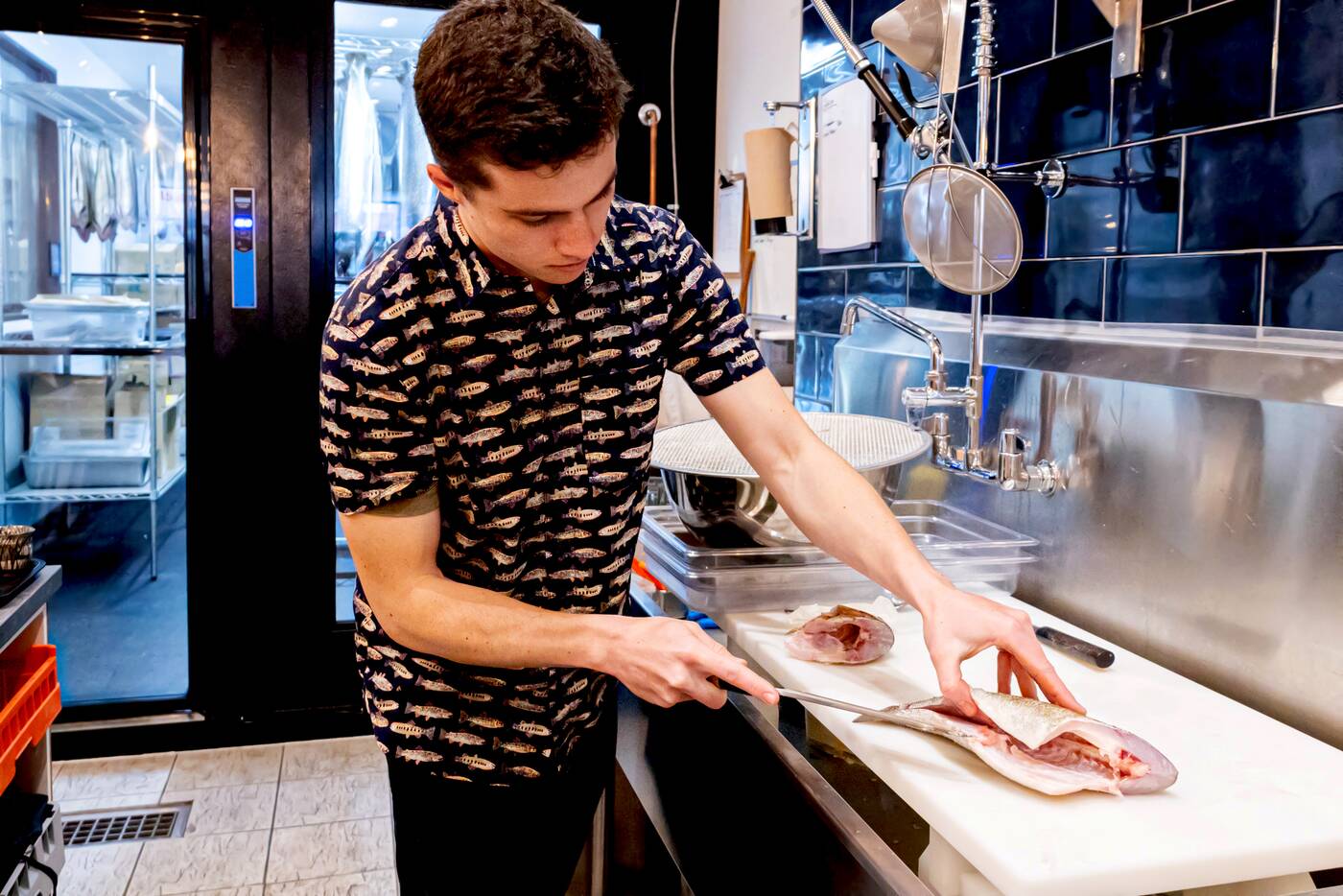 “This is fundamental to where we are,” Klip tells blogTO. “The direction that food has taken and how it's industrially processed is never about flavour, time, place or season. So, we're really happy to be bringing a little chunk of that natural world to downtown Toronto and the old way of appreciating food.” 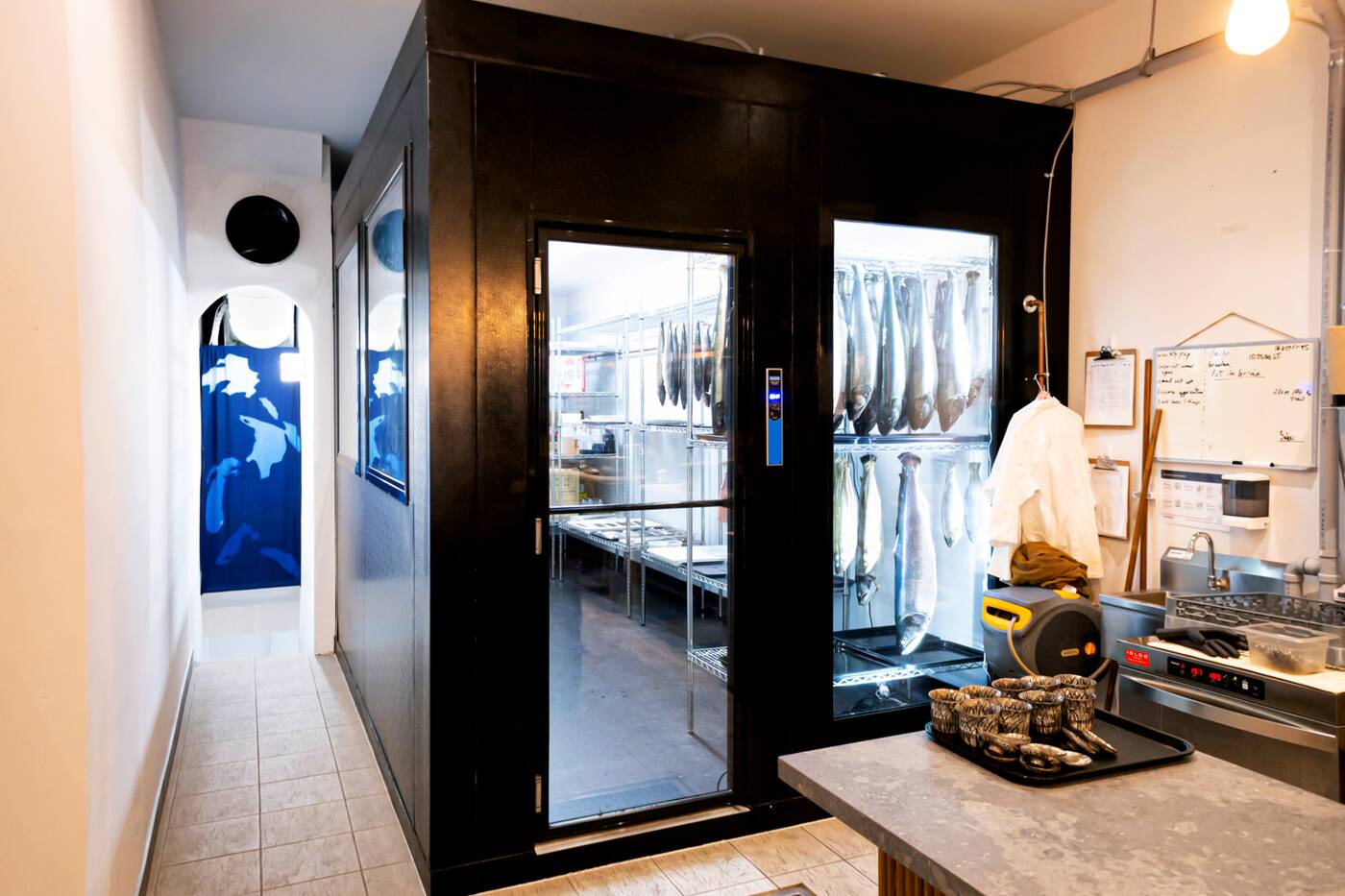 Find whole and portioned freshwater fish hanging from the racks in the shop's custom-built refrigeration room located at the rear of the long minimalistic room.

There are also a couple standing refrigerators near the entrance that are stocked with pre-marinated or smoked filets. The fishmonger also carries a selection of products that pair well with their aged fish, including soy sauce and three-year-old red miso from Umisora. 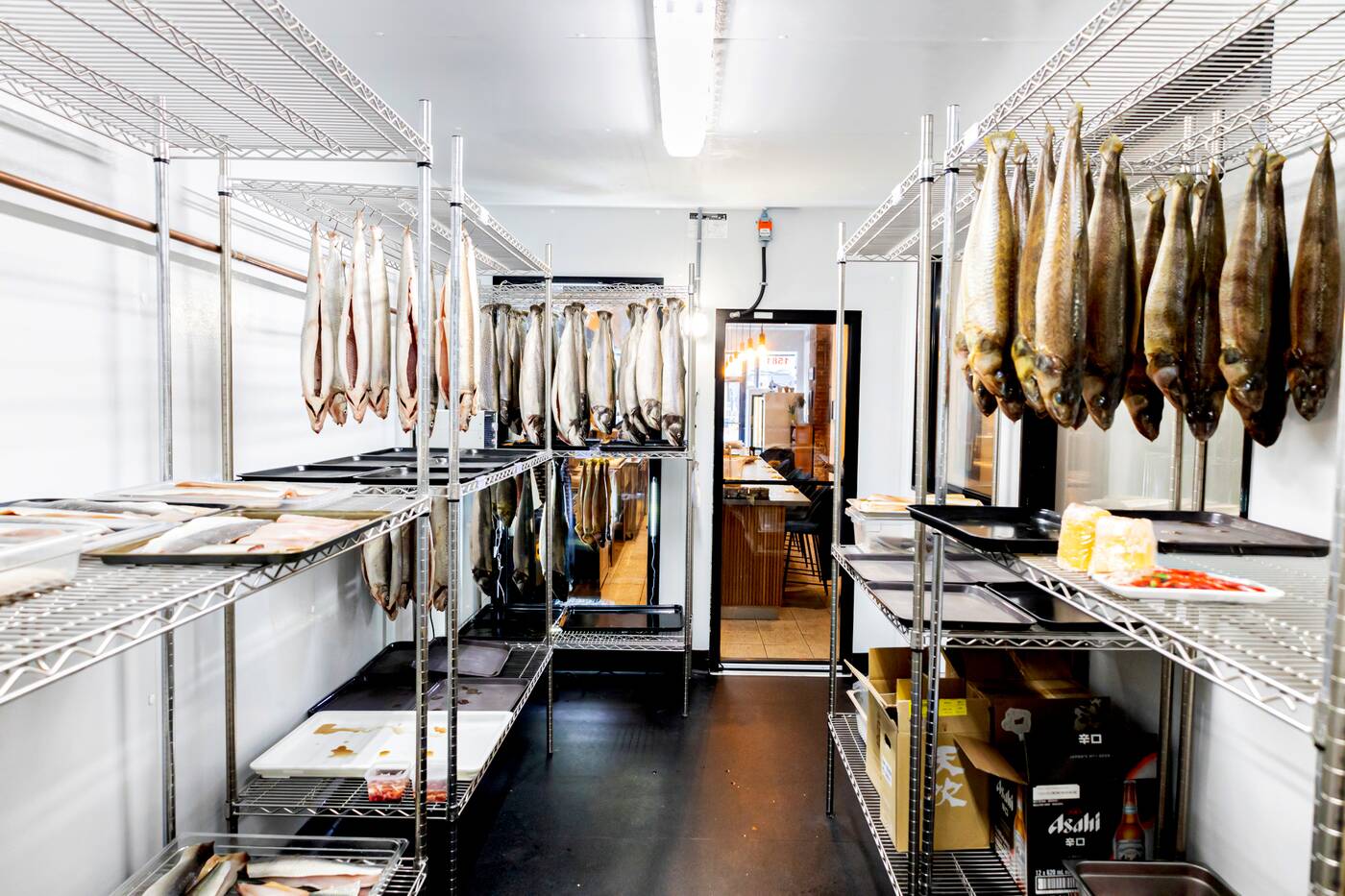 Of the 300 edible species of fish in the Great Lakes, Affinity works with 15 to 20 species drawing from what's sustainable to harvest. While the selection of fish is relatively year-round, there are seasonal items including trout roe, which have limited availability. 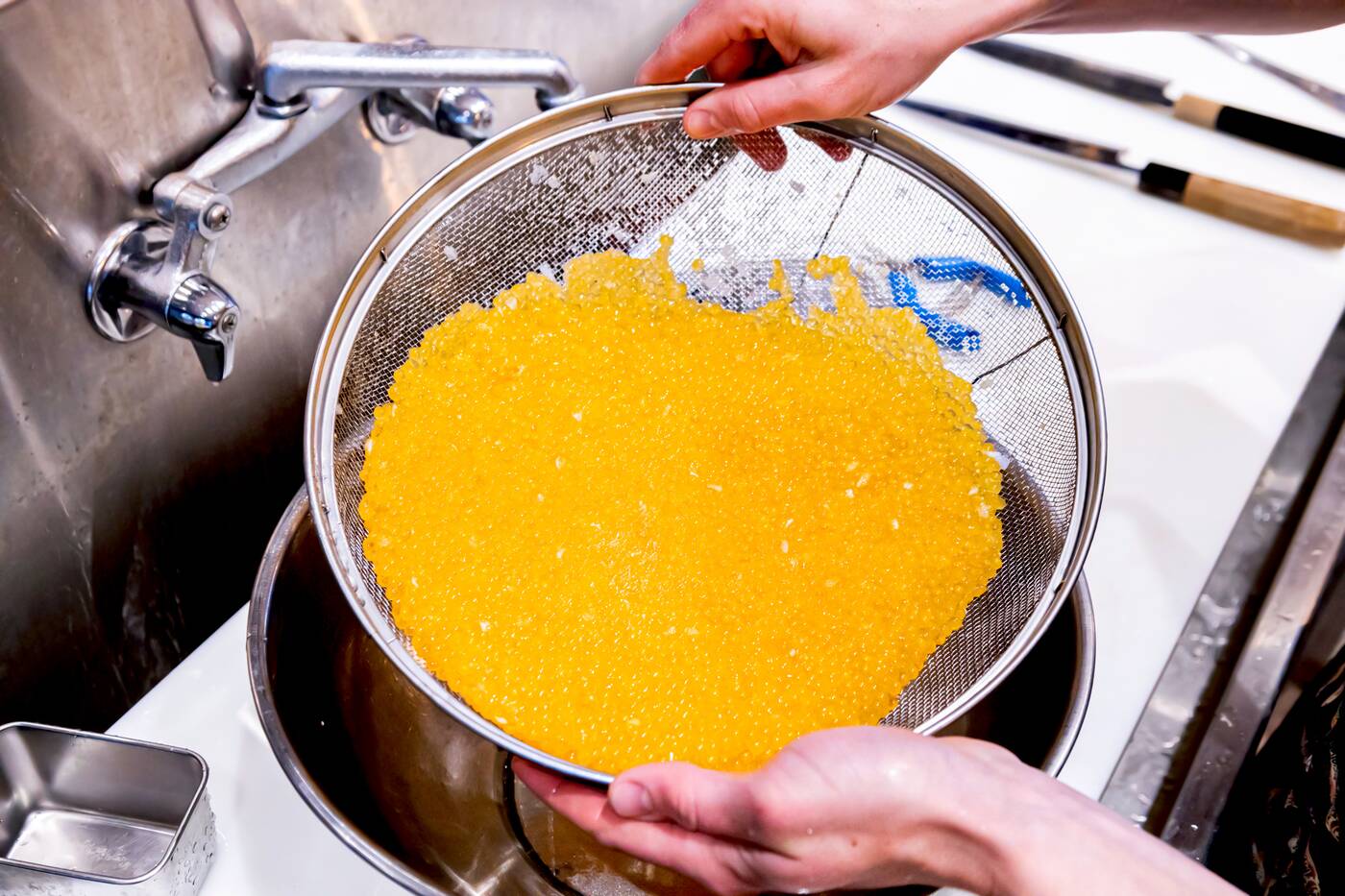 Here, Klip processes salted trout roe for the lucky shoppers who stop by during the small window (three weeks near the end of November) when it's available.

The roster will soon be joined by products sourced from the east coast that will include items like whelks. 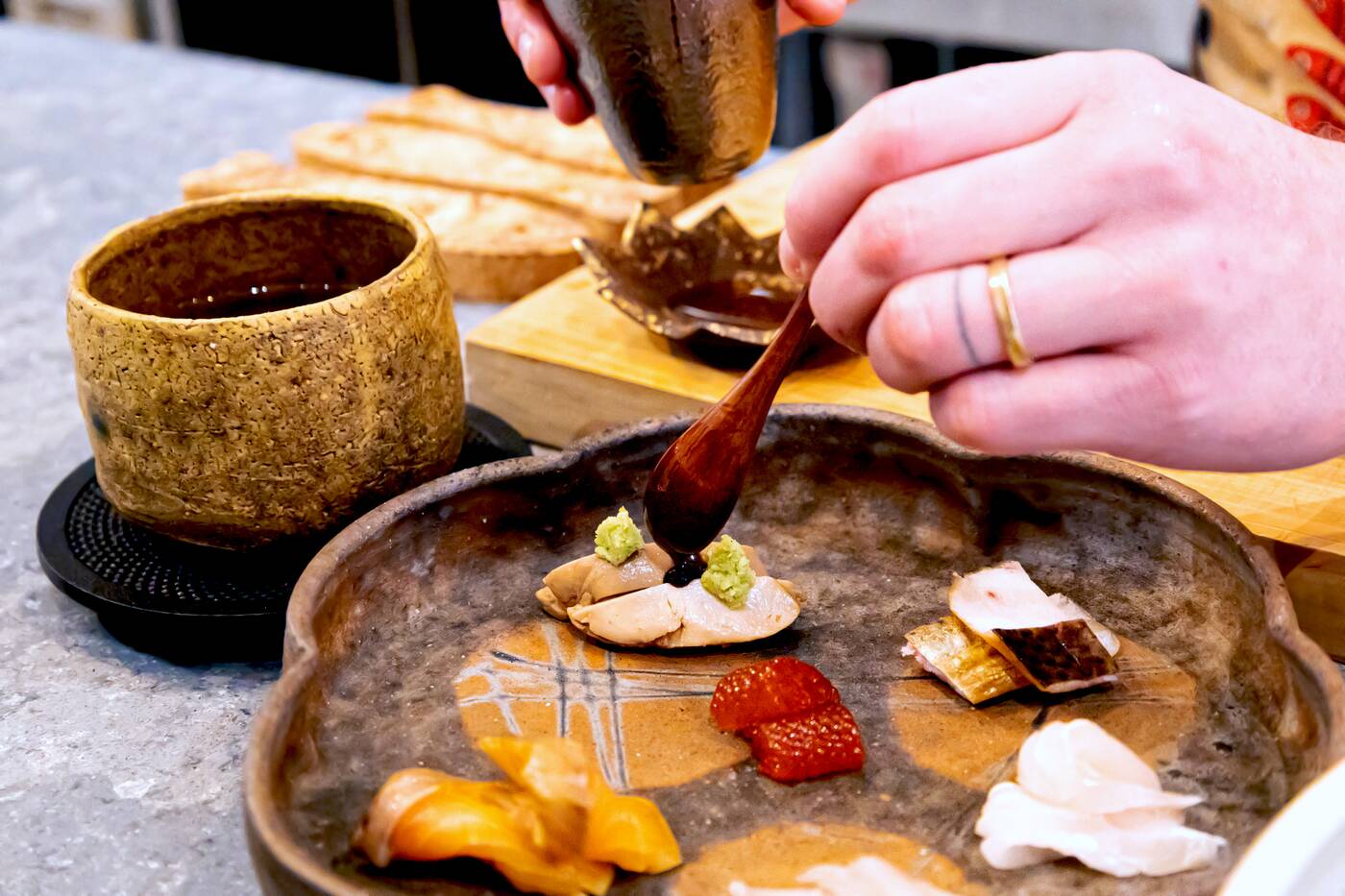 Besides retail, Affinity Fish can be booked for private events and does a weekly pop-up dinner. 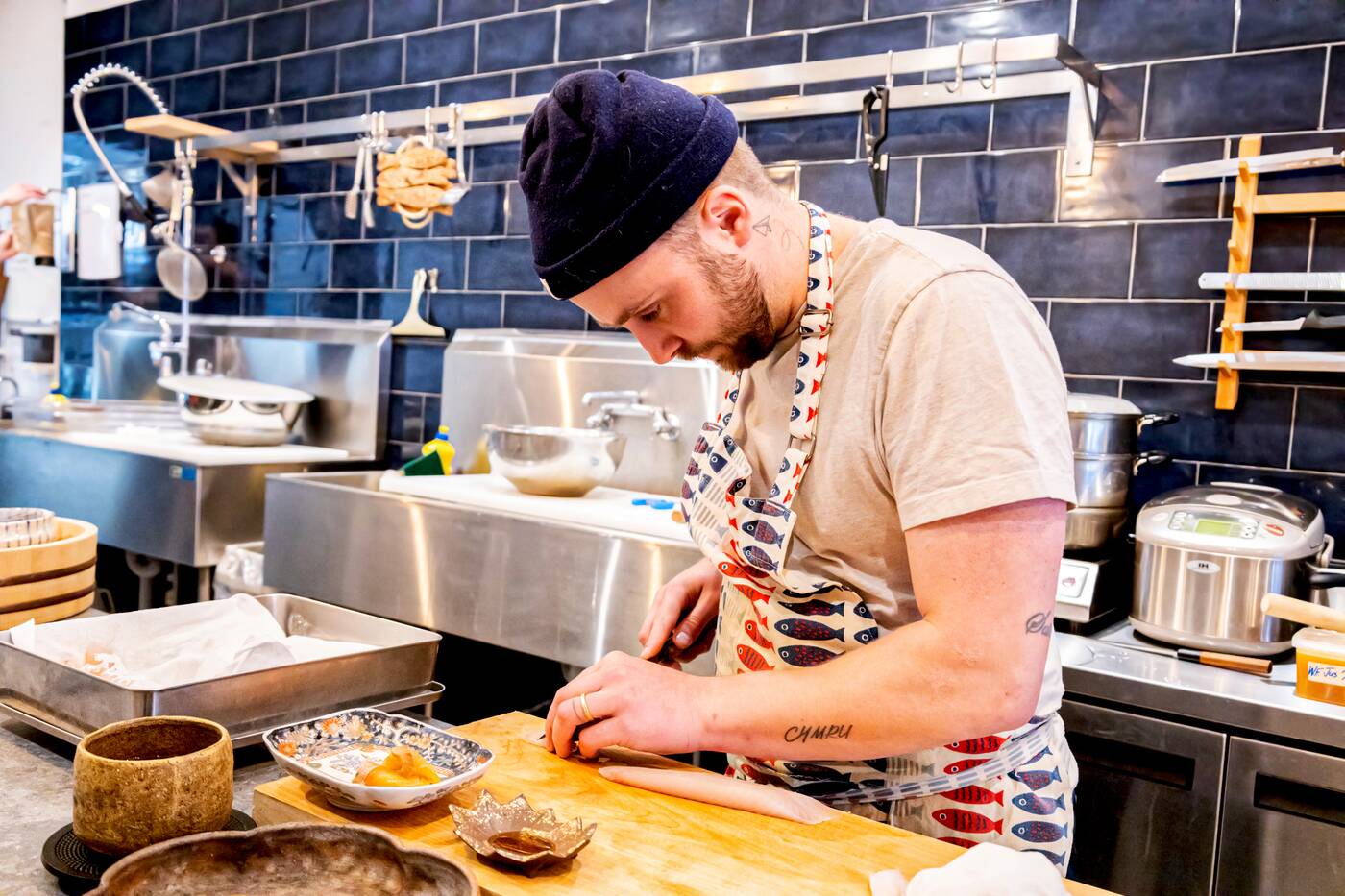 “The dinner part for us was the easy part,” Taylor tells blogTO. “It's something we've been doing for almost twenty years. Part of it was to help people understand that lake fish can be used in different ways than just fried as fish and chips. I think it's very nice for people to sit down and try things like this, and to challenge what they think lake fish is.” 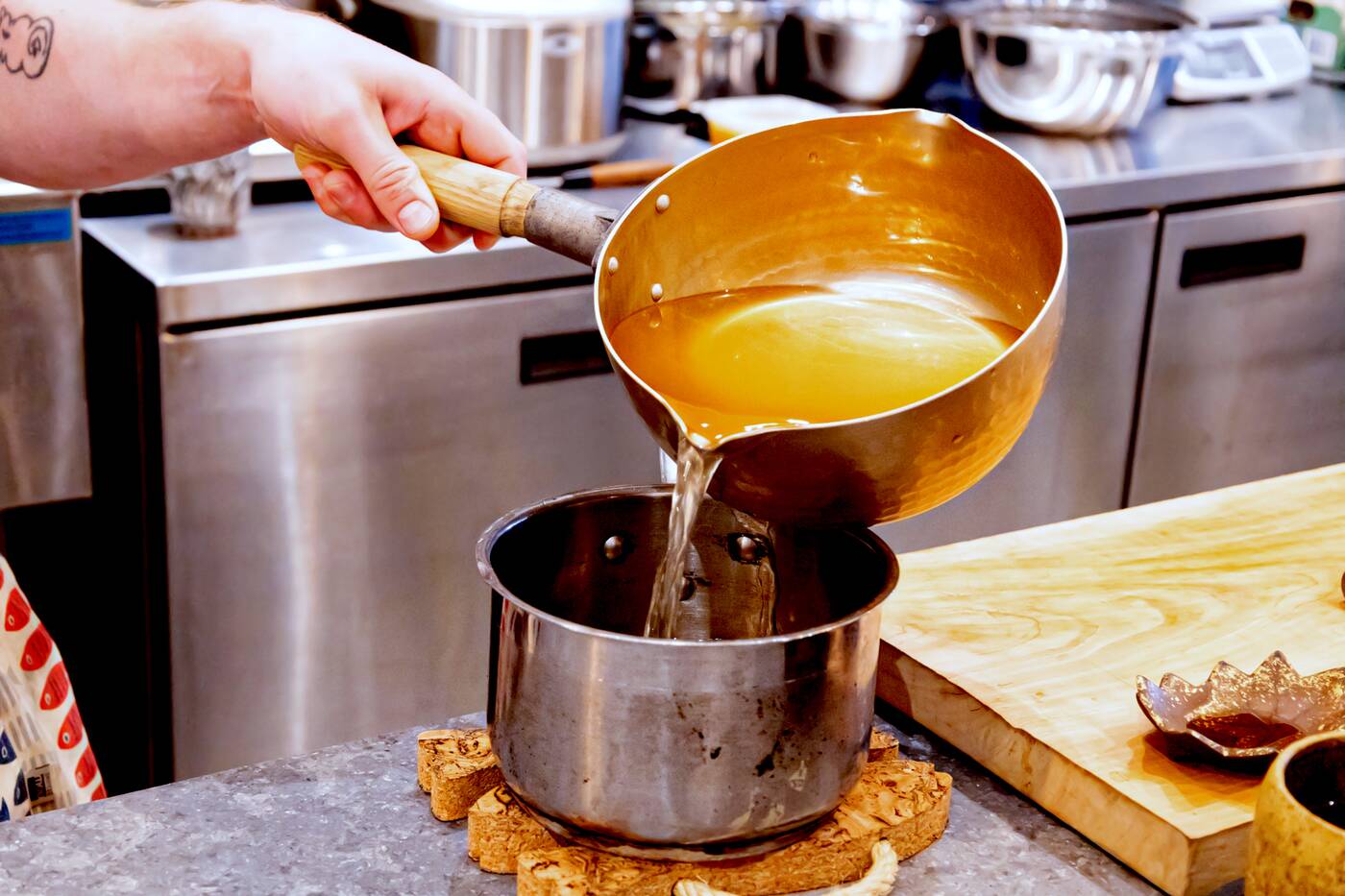 Alternating between sushi or a tempura omakase, plus a kaiseki meal, the Japanese-influenced dinner experiences are seasonally driven with a heavy emphasis on fish that serves up to 16 over two seatings. 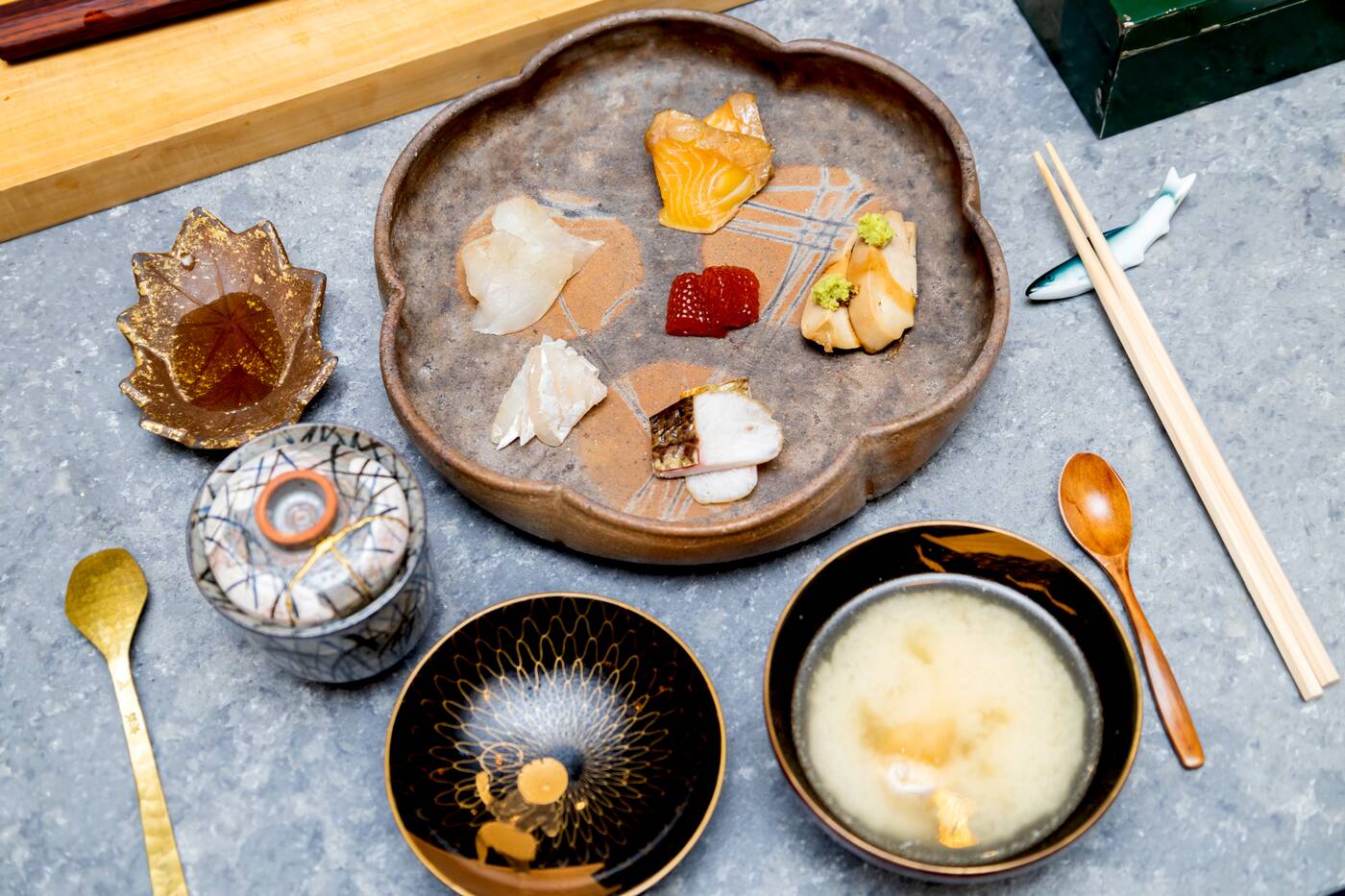 The sushi omakase experience features fish that's been processed for sashimi (including a proprietary freeze-and-thaw method that makes the fish safe to eat while maintaining the integrity of the flesh).

Since the dinner experiences are constantly changing, an omakase experience might feature items pictured below that are all served in stunning vintage Japanese pottery and lacquerware. 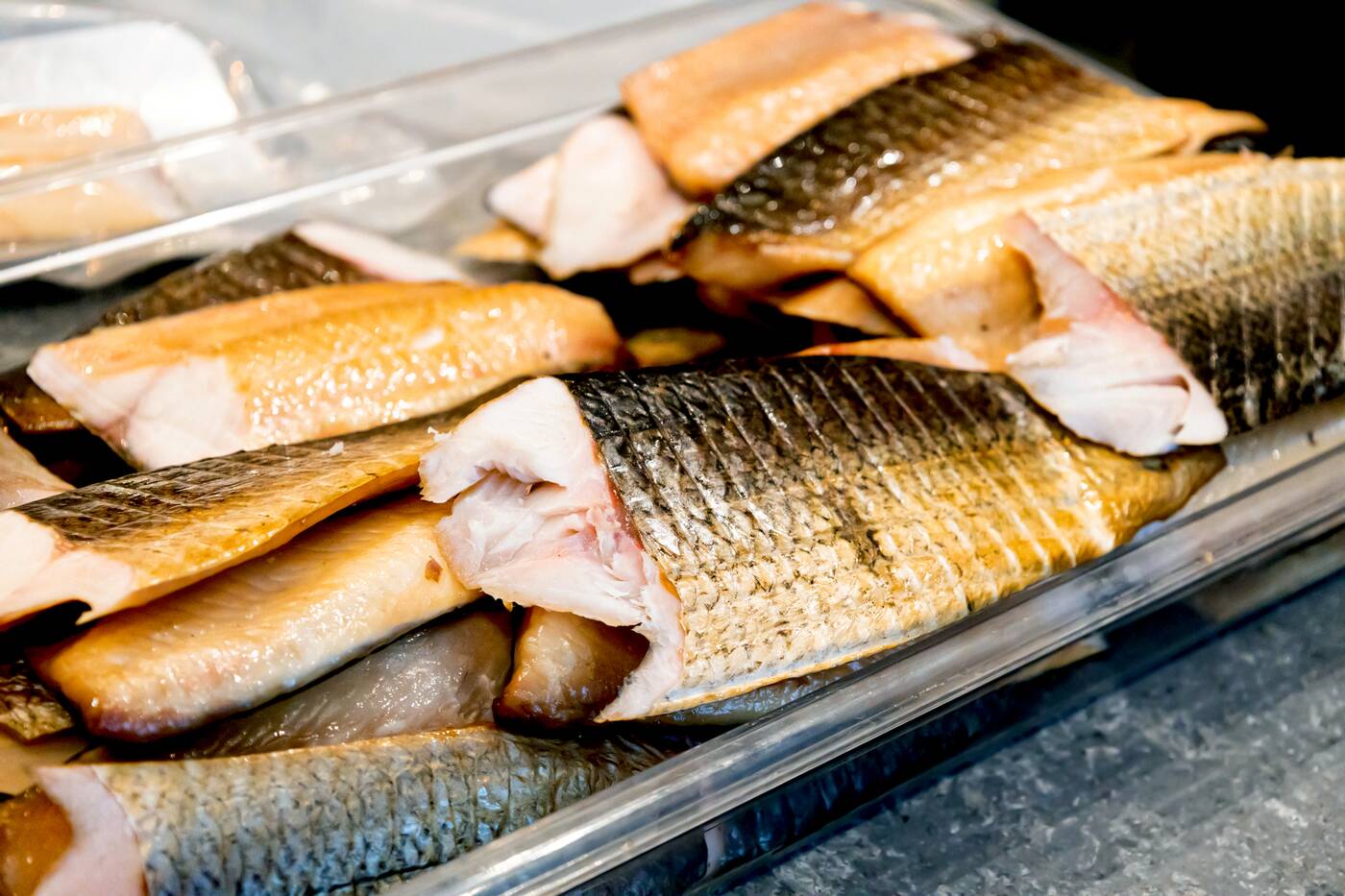 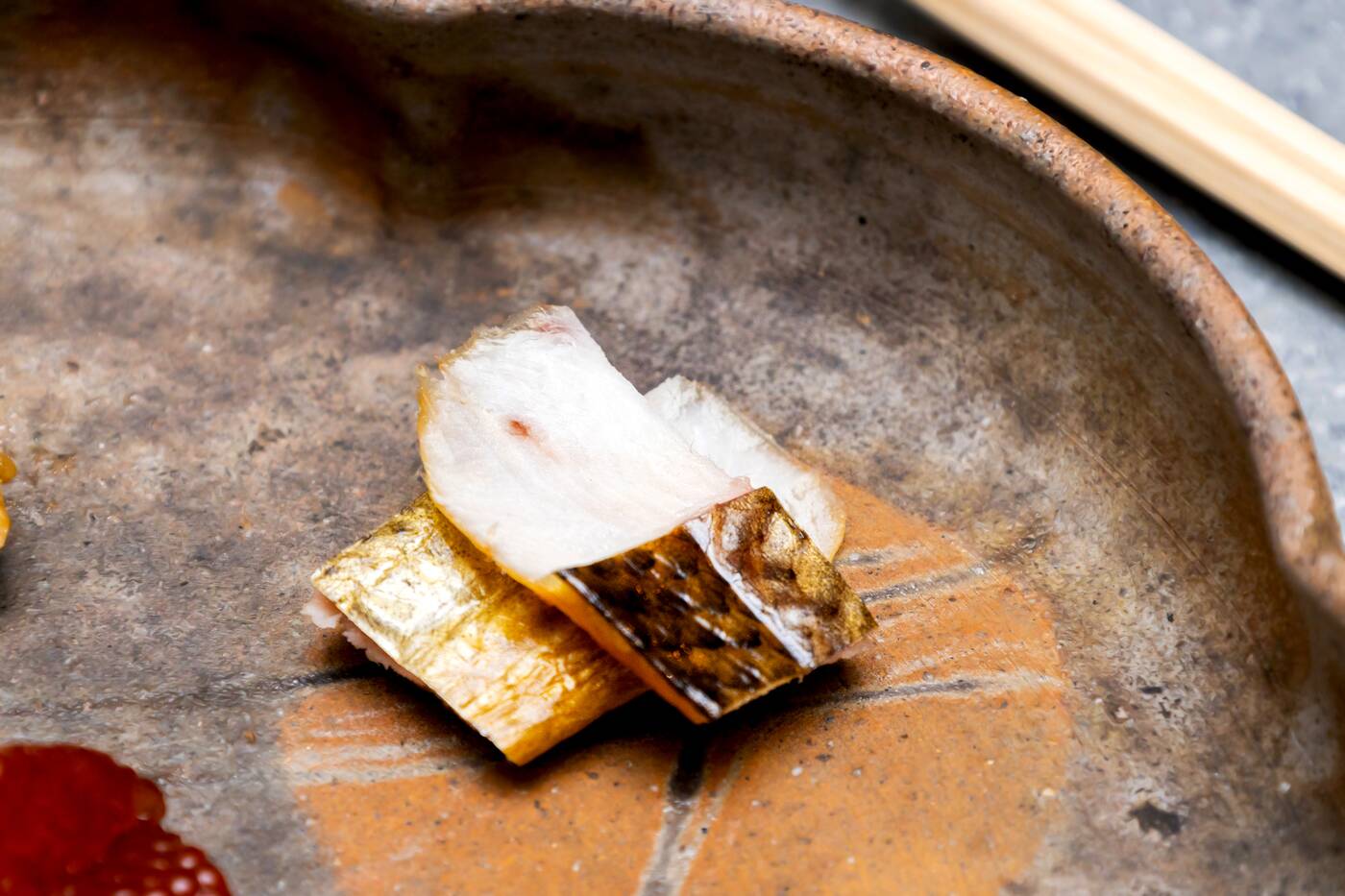 This was the whitefish served sashimi-style. 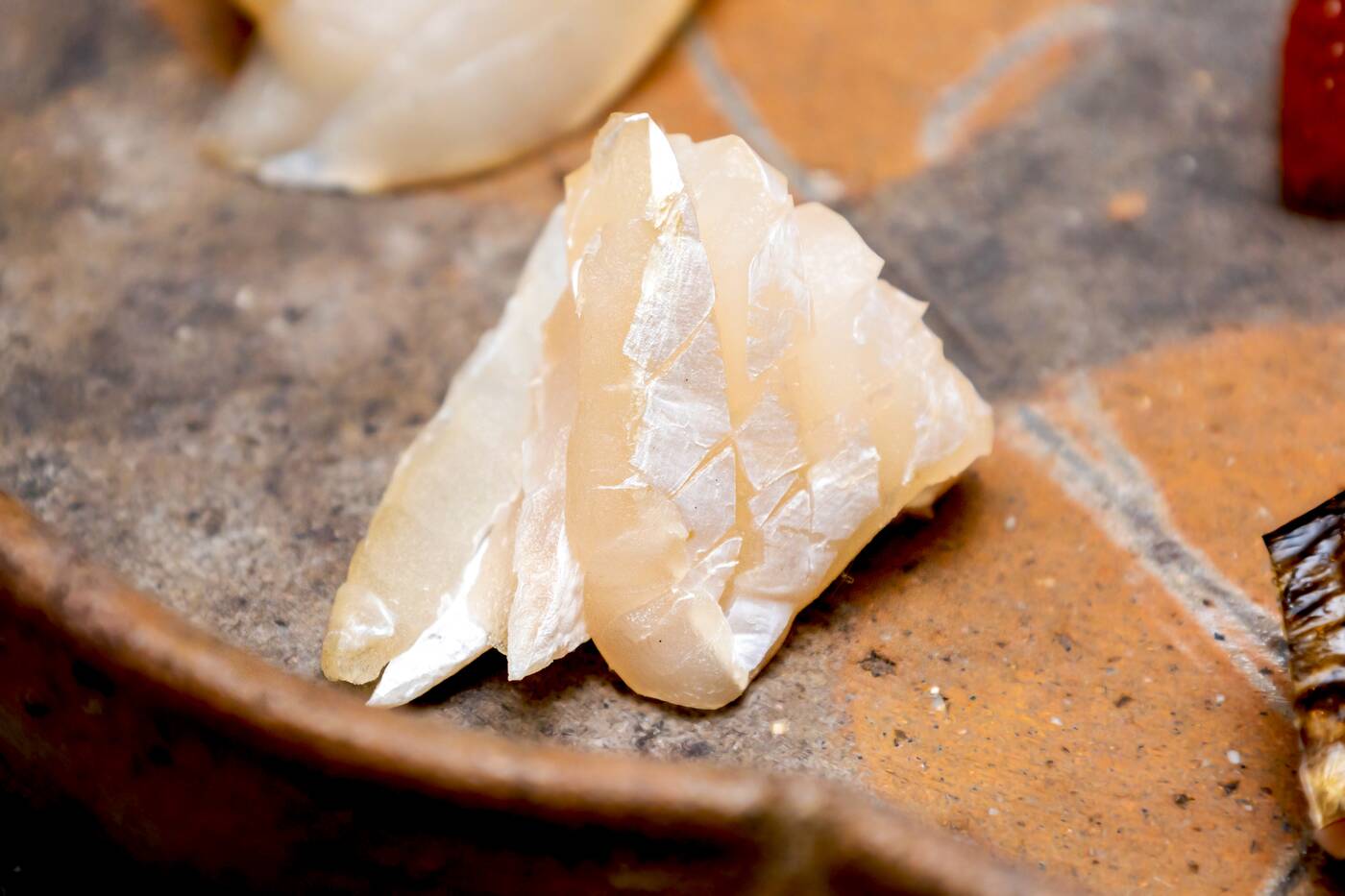 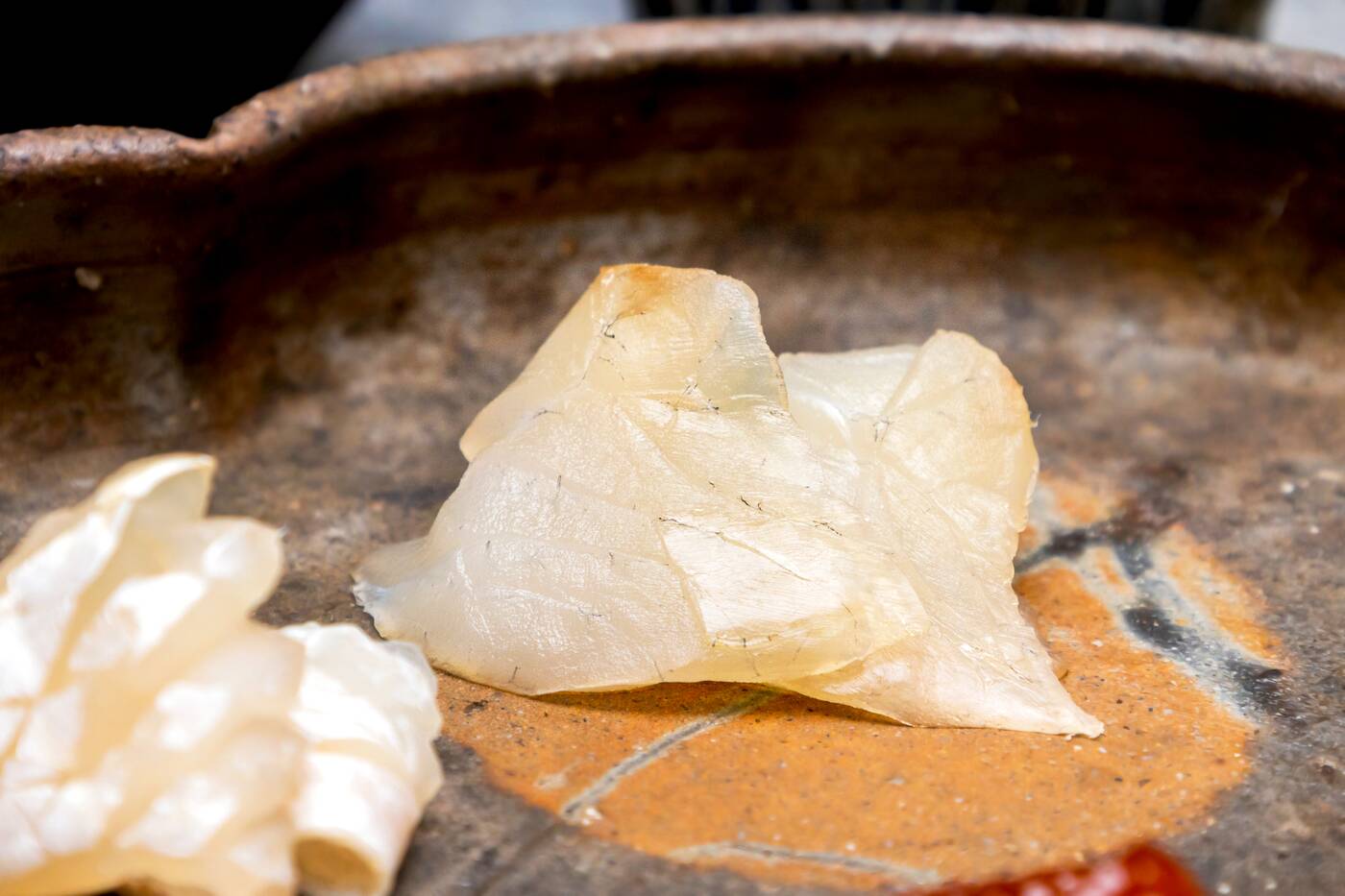 Smallmouth bass that's served with a dusting of salt. 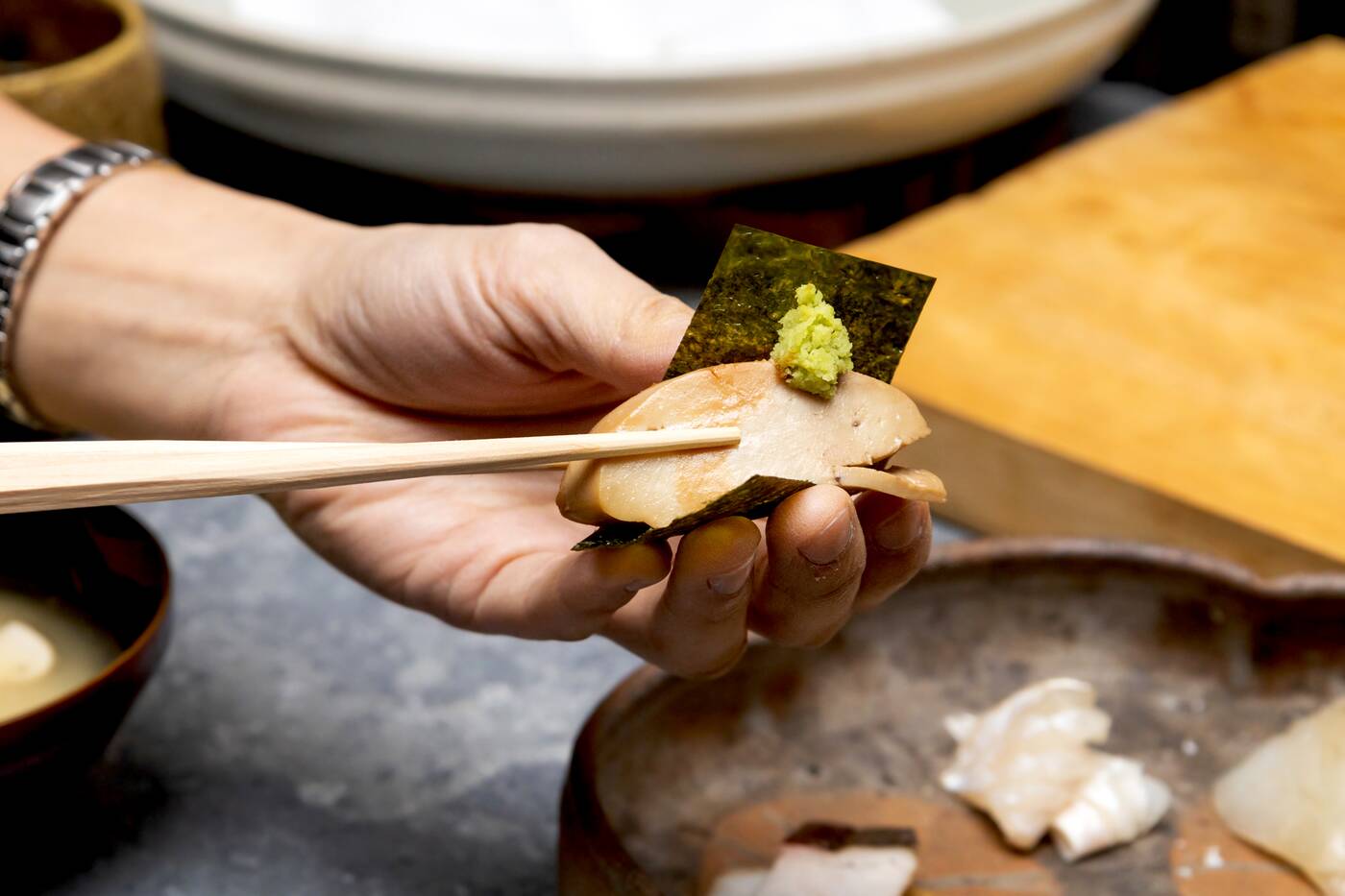 Burbot liver that's been poached in sake, mirin and soy sauce, then topped with frozen grated wasabi and tsume. The unctuous delicacy is served with nori. 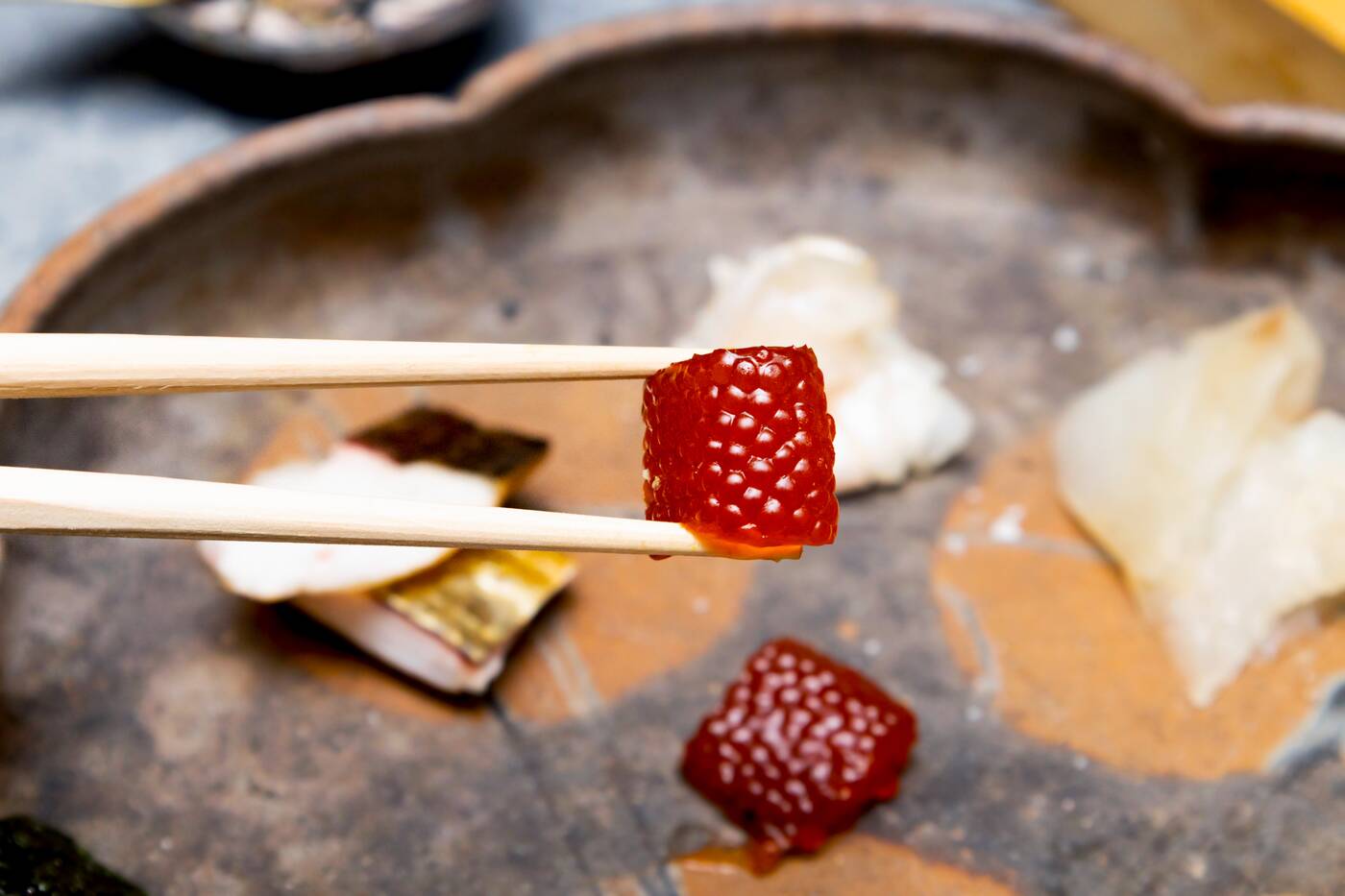 The miso-marinated trout roe was stunning. Almost like savoury jellies, but ones that have been cured by being packed in 3-year-old red miso made with barley, soybeans, salt and koji. 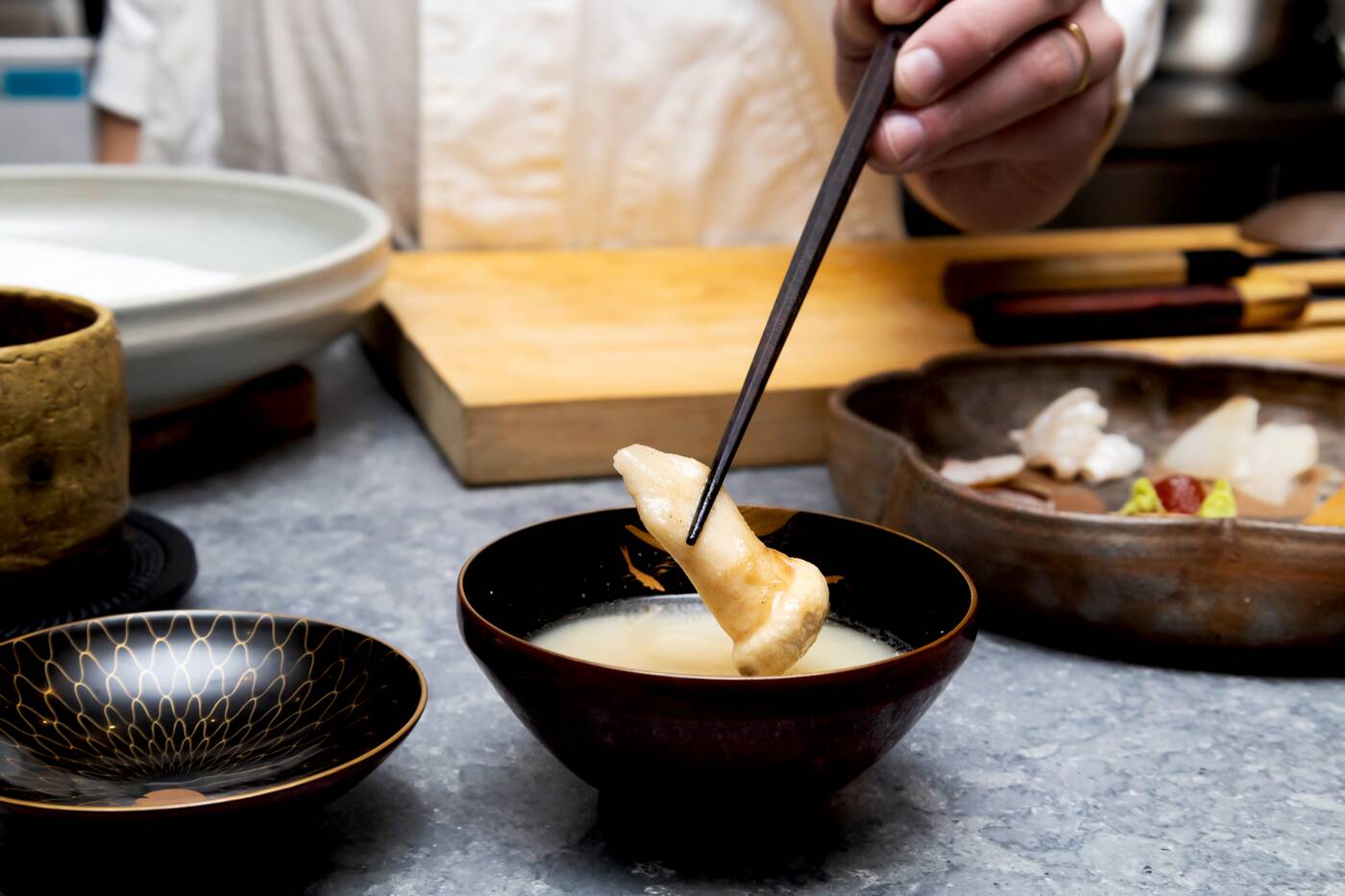 This Shiro miso soup was made with roasted whitefish bones and topped with grilled pine mushroom. 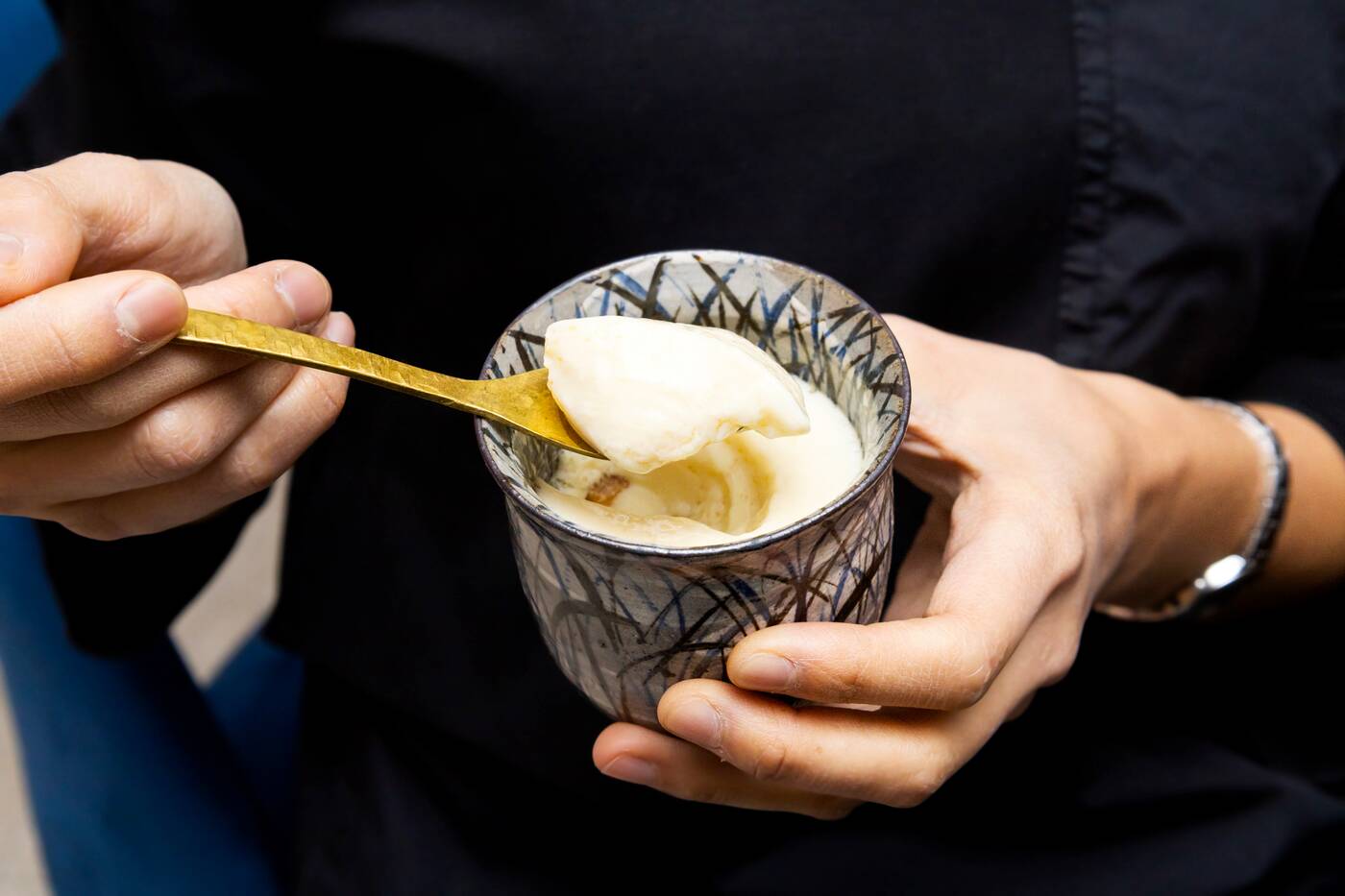 The steamed and served chawanmushi is a silky savoury steamed egg custard that hid, on our visit, nuggets of tender smoked chinook salmon. 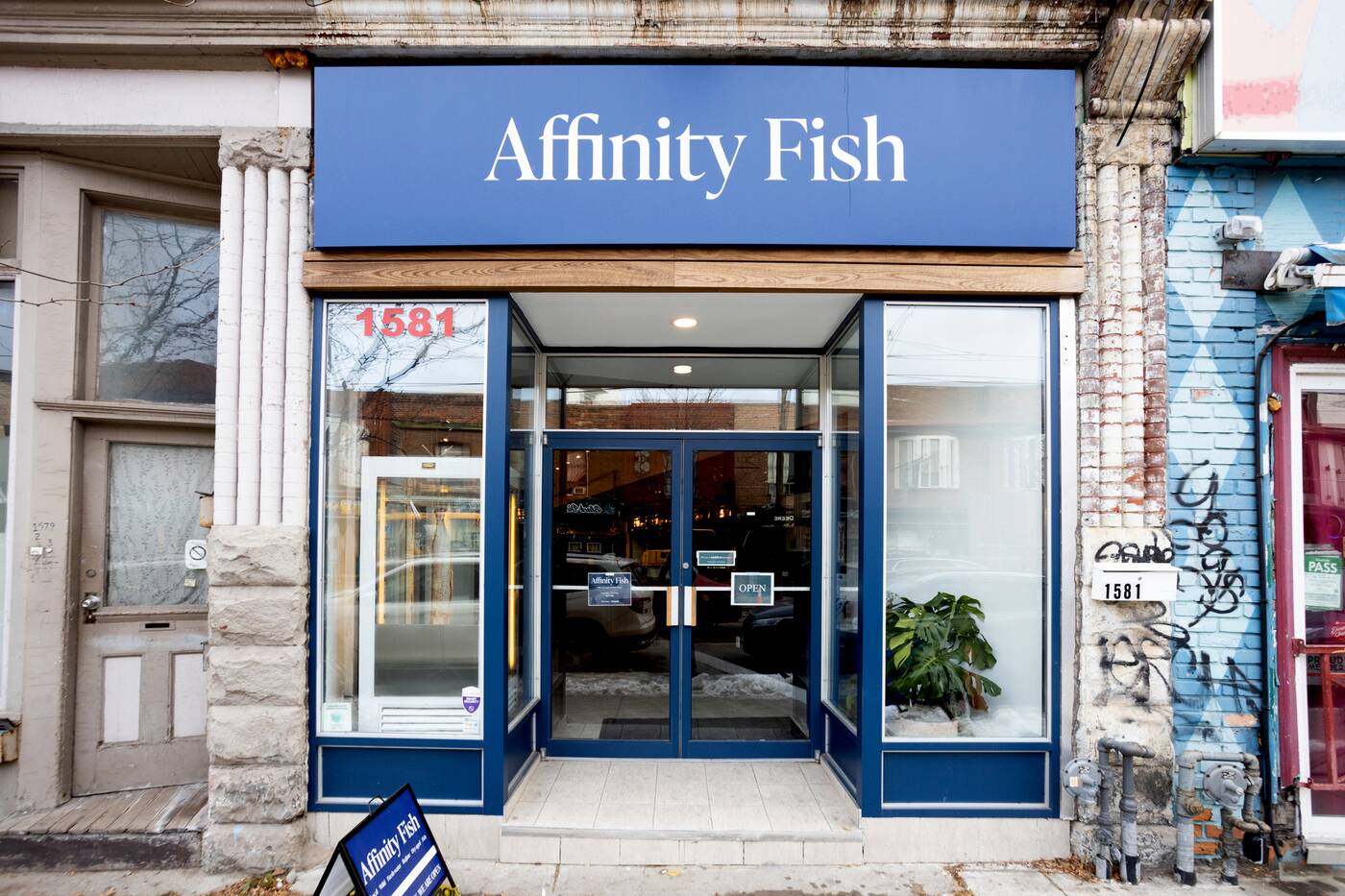 In addition to its storefront on Dundas past Dufferin, Affinity Fish also sells wholesale to restaurants including Sakai Bar (where Taylor had been serving the products during the early days of the business prior to opening up the shop), Canoe, Actinolite and even Simpl Things.