Joe Rockhead's, established in 1990, was Canada's first indoor rock climbing gym, and recently celebrated 20 years at its current Liberty Village location. Born out of the owners' personal desire for a place to climb in the winter, Joe Rockhead's has helped to establish the urban climbing community and advance the sport of rock climbing. Owners Bob and Sharon Bergman have also introduced climbing to countless beginners like me, who had little awareness of rock climbing beyond its continual appearance on fitness trend lists and, let's be honest here, attractive OKCupid profiles.

Looking to fight the winter blahs, I recently decided to give rock climbing a try. Given its history and convenient location, Joe Rockhead's three-hour introductory lesson ($35) drew me in when comparing Toronto's rock climbing gyms . 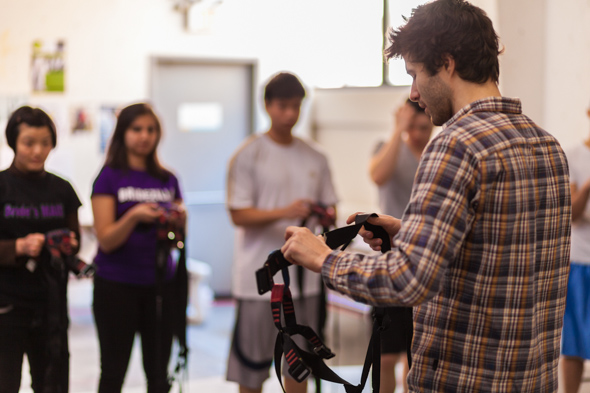 Trekking through the snow one dark weekday night, any desire to go home and hibernate disappeared when I entered Joe Rockhead's. It can only be described as an adult jungle gym: multi-coloured holds sprinkled like confetti on the industrial grey walls; upbeat music in the background; and fit 20- and 30-somethings climbing in every direction. After signing very detailed and frightening waivers, my group of five beginners set off with giddy enthusiasm. 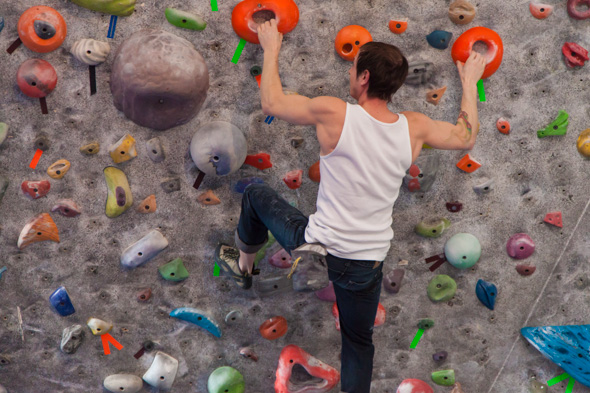 The Bergmans aim to distinguish themselves from other gyms by offering a more comprehensive beginner lesson. While other gyms may offer a half-hour introduction, Bob believes their three-hour lesson "caters to the beginner, to ensure they have a full experience," and become confident climbers and belayers. 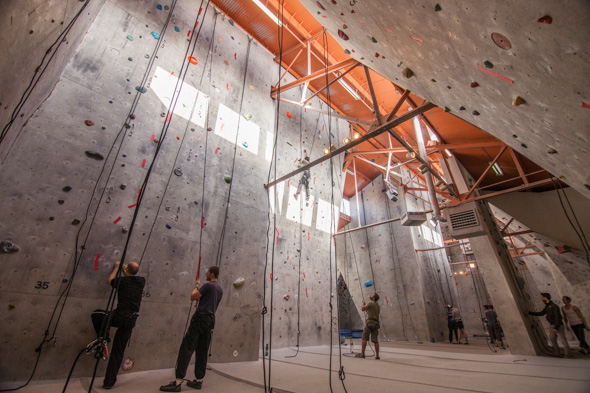 Comprehensive, indeed. Our instructor spent the first hour teaching us safe climbing and belaying techniques, in an engaging and interactive way. After climbing under close supervision, we were free to explore the gym, which offers 22,000 square feet of wall space for bouldering, top rope climbing, and lead climbing. Our instructor kept an eye on us all evening, offering guidance and encouragement. Her claim that my friend and I were "naturals" may have given us a tad too much confidence, however, which was quickly dashed when a more advanced route left us hanging, so to speak. 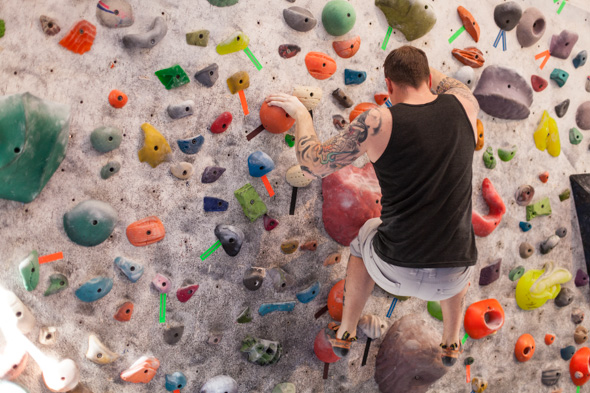 After just a few climbs, I understood rock climbing's popularity. Bob explains to me that climbing perfectly balances physical activity with problem-solving, and individual goal-setting with social engagement. As an alternative to your typical, mainstream fitness club, it appeals to urbanites looking for something different. In short, "Toronto and rock climbing: it's a match made in heaven." 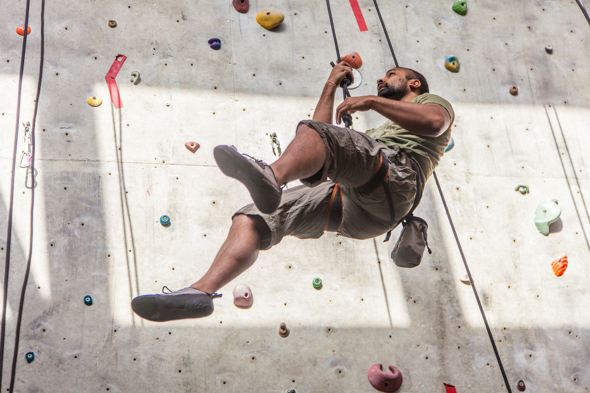 The social dynamic of rock climbing was certainly apparent during my Thursday night visit. The gym was packed with advanced climbers dancing up walls and overhangs, alongside beginners and intermediates, all chatting between climbs. True to its Liberty Village locale, there was a hip, social atmosphere - like an athletic bar scene alternative, where harnesses and chalk bags are de rigueur. 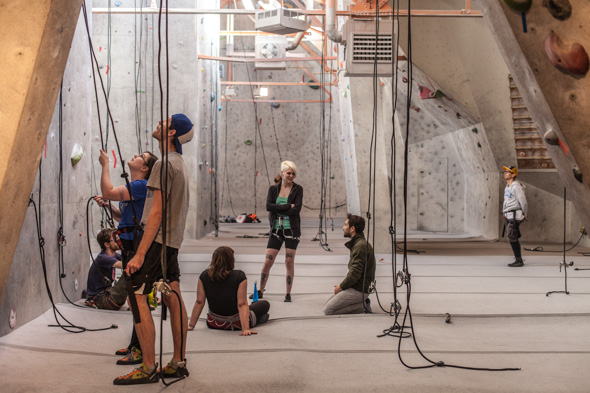 Unfortunately, this meant considerable wait-times between climbs. Those looking for a calmer experience may wish to avoid Tuesday and Thursday evenings (the busiest nights), and try weekday afternoons or weekend mornings. Returning one Saturday morning, I had my pick of empty walls and enjoyed the quieter, family-friendly atmosphere.

On my second visit, I purchased a day package that included shoe and harness rentals ($25), but those taking a beginner lesson can 'supersize it' and pay $45 for a lesson and two-week membership (not including shoes or harness). Trained climbers can purchase a day pass ($18), 10-visit pass ($150), annual membership ($595) or monthly membership ($100 for the first month and $55 per month thereafter), not including equipment rental. Joe Rockhead's also offers private lessons (starting at $75/hour) and lead climbing classes (3 sessions for $170). 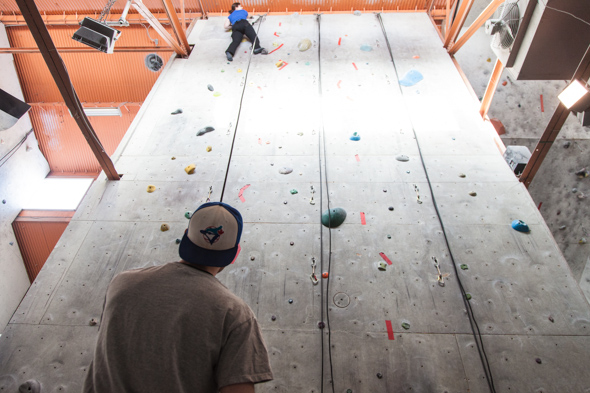 If the goal of Joe Rockhead's is for beginners to leave feeling capable, invigorated, and eager to return, then they succeeded in my books. Bob is quick to point out, though, that he and Sharon are equally focused on catering to the top-end climber. They are continually creating new routes, in order to deliver the best experience climbers have ever had: "I'm all about quality. I want to be Holt Renfrew. I don't want to be Walmart." 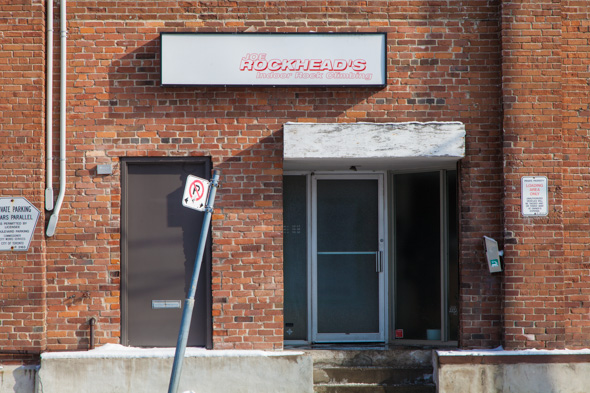 Whether or not you're a skilled enough climber to tell the difference, it's worth escaping the cold, testing your limits, and checking out the party at Joe Rockhead's.