Hard Candy Fitness is the newest high end fitness club to open in Toronto. Found near Yonge and Gerrard on the fourth floor of the swanky Aura condo tower, this is the latest outpost of the chain owned by no other than Madonna.

So far, this is the only North American location of the Hard Candy Fitness empire aside from Mexico City. There's also one in Chile but all the others call Europe home. According to Justin Elie, the club's operations manager, Madge chose Toronto because it's one of her favourite cities. 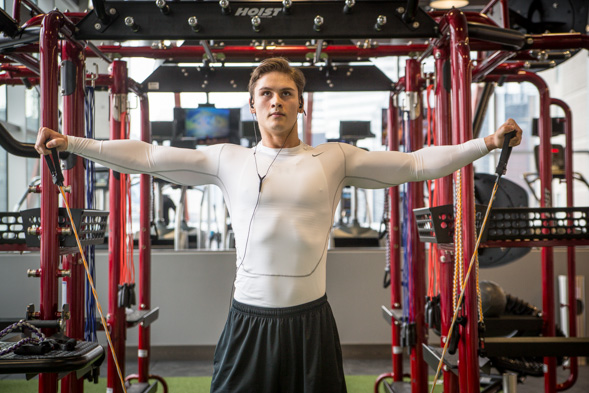 As you might expect, this ain't yo mamma's health club. If you're looking for a shvitz and schmooze in your moth eaten sweats, you might want to head elsewhere, Hard Candy is equal parts fitness club and night club for those who want to see and be seen. Justin tells me the target demo is young professionals aged 25 to 45 with an affinity for style and having fun. 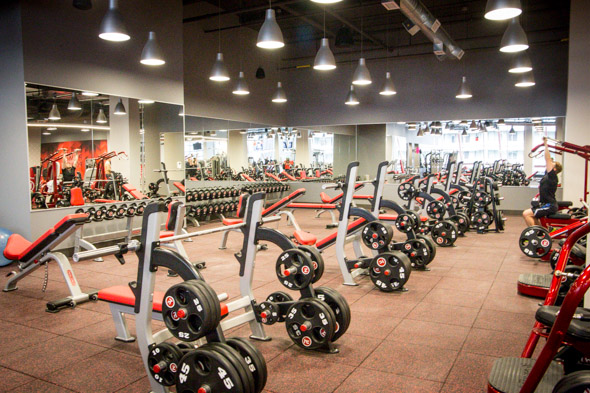 The space itself is extremely impressive. Wall to wall windows and high ceilings provide a great view and abundance of natural light. Everything, including the top notch equipment (much of it customized specifically for Hard Candy) matches the sleek white, black, red and grey colour scheme. Not surprisingly, there are quite a few murals of the Material Girl herself.

While there is no doubt the intent to make this club a social destination, fitness is taken quite seriously. The club is 42,000 square feet with ample cardio and strength training equipment guaranteed to turn you into Hard bodied eye Candy. 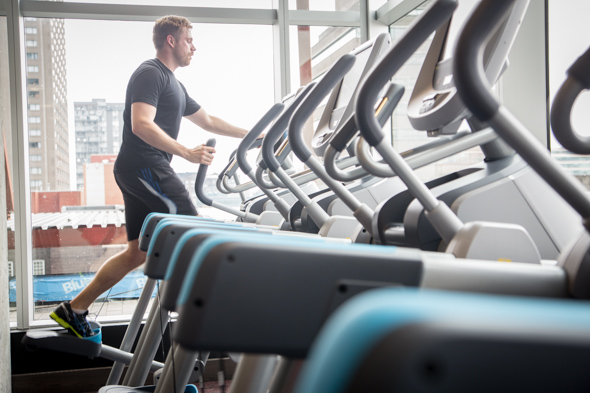 Not only is there a lot of high tech equipment, but there is a greater variety than you will find in most fitness clubs. I give them bonus points for having a large number of step mills (stair climbing treadmills) - one of the best and most underutilized cardio machines out there, as well as tread climbers (treadmill/elliptical machine hybrid), something not often found in Toronto fitness clubs period. 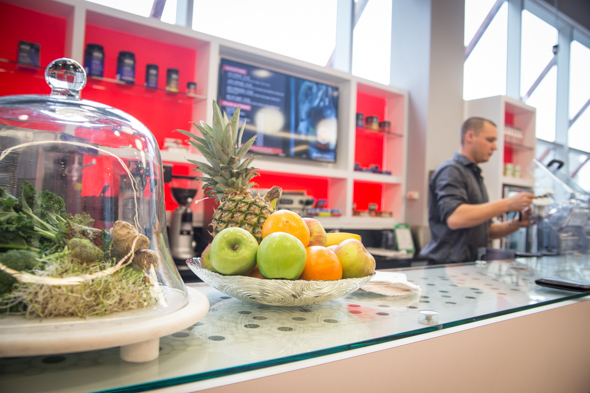 There's also a juice bar with smoothies and snacks, a massive spinning studio and a group fitness studio. A hot yoga studio is also currently under construction.

Along with all the equipment, the club offers a large array of group fitness classes. Along with the standard conditioning, yoga, Pilates, spinning and cardio classes, there are also proprietary classes which all have the Queen of Pop's stamp of approval on them. Instructors of these dance-focused classes must receive Hard Candy's own training. Apparently the choreography is designed by Madonna's own workout regimen. 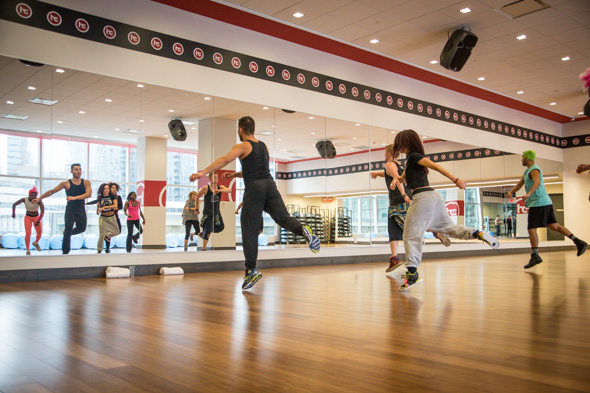 The change rooms are sleek and expansive, much like the rest of the space, and absolutely immaculate. Towels and basic toiletries are provided. Membership cards also function as keys for the lockers, using a technology I have definitely never seen at a club before. There are still under construction terraces, which Justin tells me will be used for outdoor classes and social events, and I am sure, are guaranteed to draw members in droves. 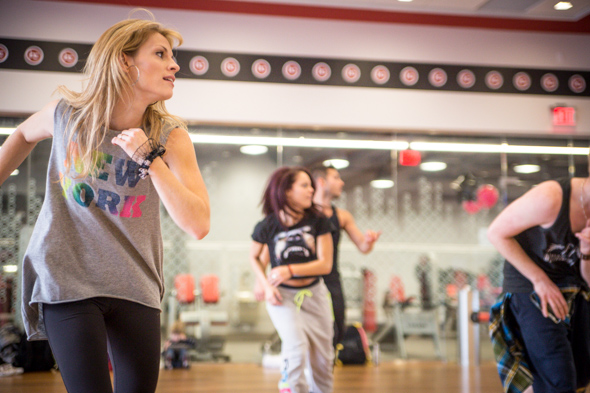 My visit includes checking out the midday class taught by the group fitness coordinator, Lori Kirwan. Kirwan led us through her own signature class called Tornado, which is essentially HIIT training, with a strong focus on core. After a retro-style aerobic warm-up, she took us through a circuit (using hand weights, a ballast ball, a step, etc.), first doing each exercise for 75 seconds, then each exercise for 60 seconds, and finally going through them again for 45 seconds each.

While this may not sound tough, believe me it was. After the second time through I was feeling pretty bitter about having to do it all again, even if just for 45 seconds. And my core? It was sore for a good 48 hours afterwards.

Lori tells me that Madonna's philosophy regarding fitness is to avoid offering beginner classes, to have all classes strive for a certain level of difficulty, but allow participants to make whatever modifications they need. This will likely be welcomed by fit folks but may intimidate newbies. 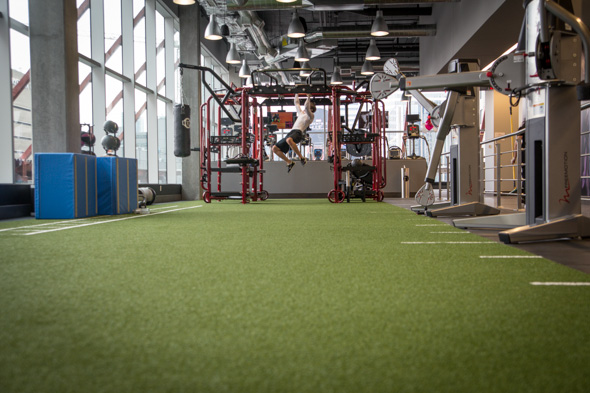 In the change room after the class, a bubbly member tells me she is already addicted to the dance classes and has started coming 4-5 times a week. Hey, anything that encourages exercise adherence is good in my book. While this club may not be the right fit for every fitness enthusiast, Hard Candy gets top marks for friendly staff, fabulous state-of-the-art equipment, a beautiful facility, and solid classes.

Interestingly, while you pay a premium for a day pass, which will cost you $50, membership fees are far more reasonable, starting at $99/month plus a $69 enrollment fee. 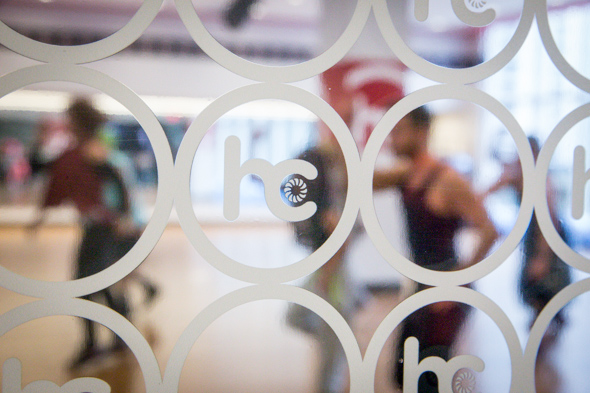