Drop Boxing is where you can go in Toronto to throw a punch. In a 5,000 square foot setting, the fitness studio integrates cardio, boxing and strength training into one killer 50-minute workout.

Drop Boxing takes its cue from New York's popular boxing gym, Rumble. It's all about endurance, strength and punching bags at this gym. But, it doesn't end there. The studio has a one-on-one personal training space that doubles as a stretch room. 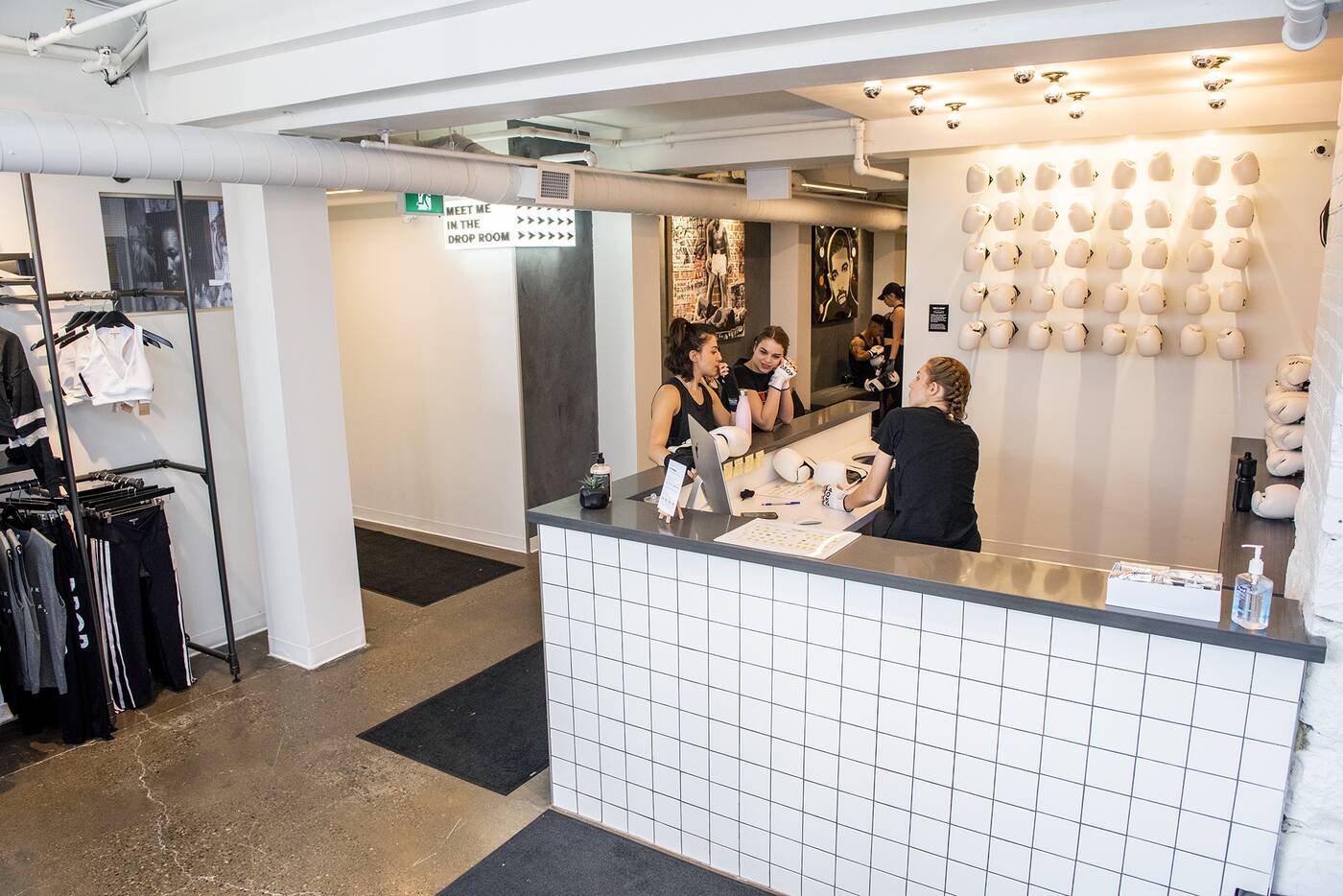 The thing with Drop Boxing is that once you get going, it's hard to stop. There's something powerful about being light on your feet, battling against the push and pull of a punching bag. 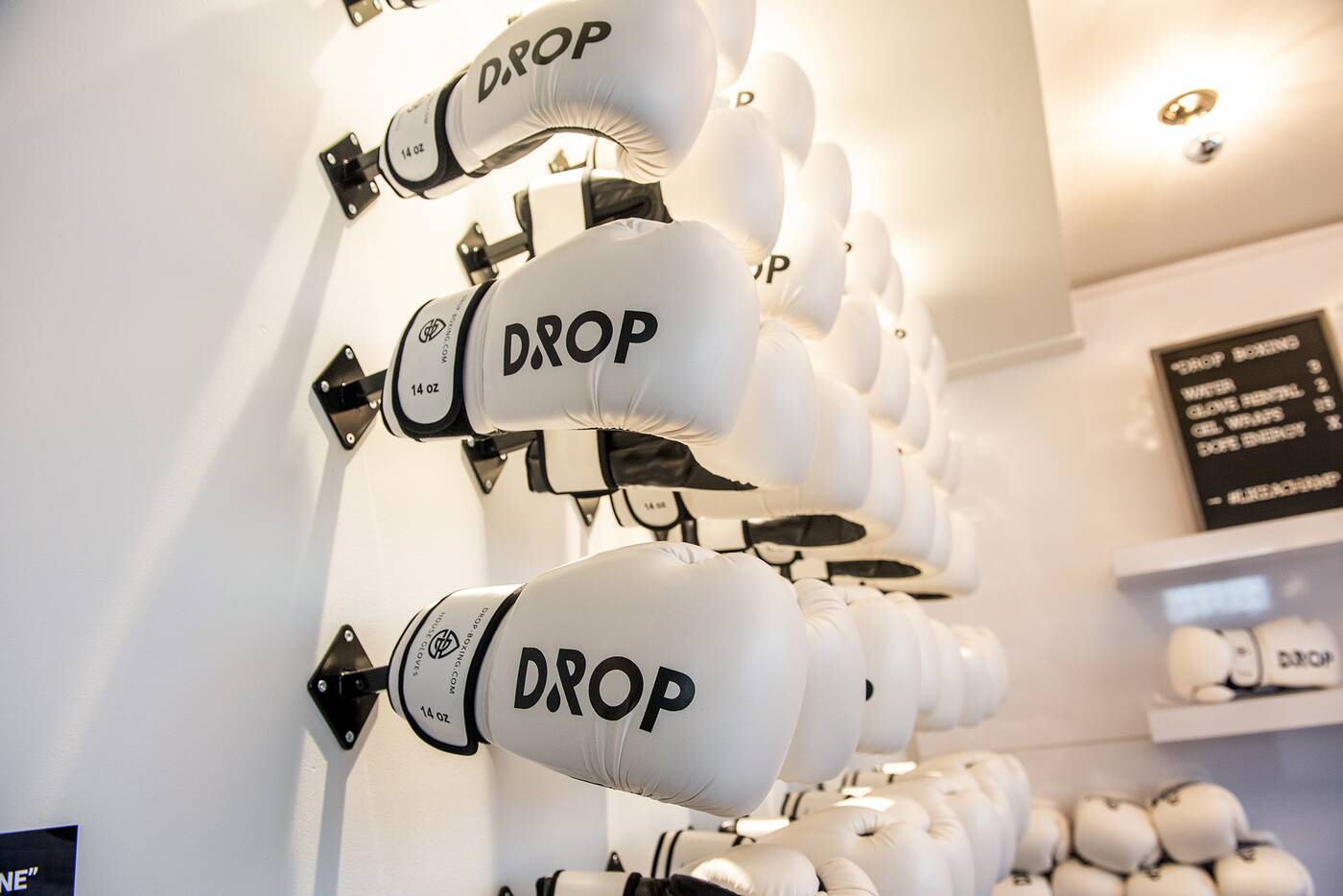 Once you're there, you're on, and there's no room for slacking. The punching, dropping, and sweating is heavy, full and fast as the room transforms into a nightclub for fitness enthusiasts. 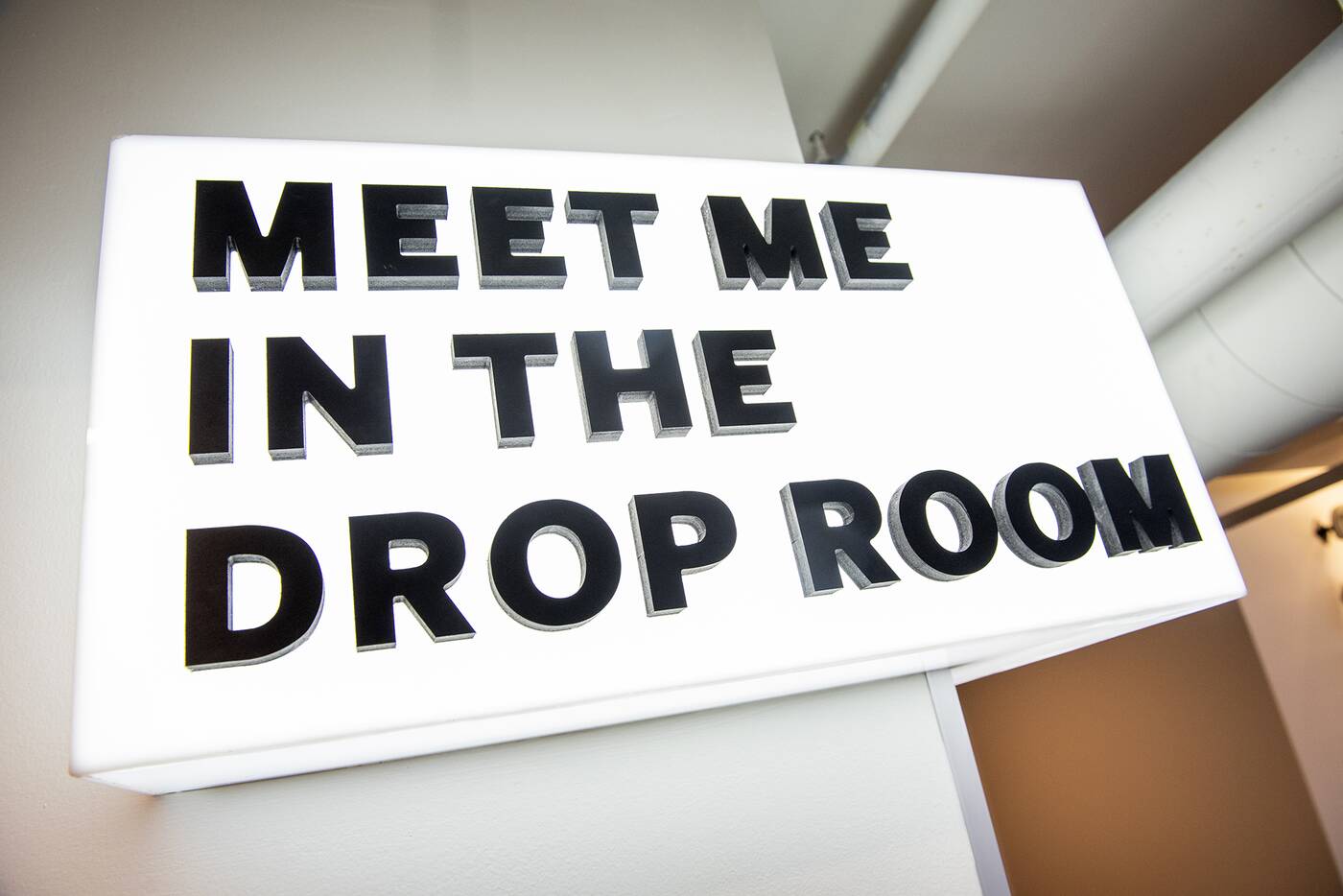 Two things stand out to me about this gym: the playlist perfectly matches the punches, and the nightclub-quality sound and lighting make this more than just a workout space. 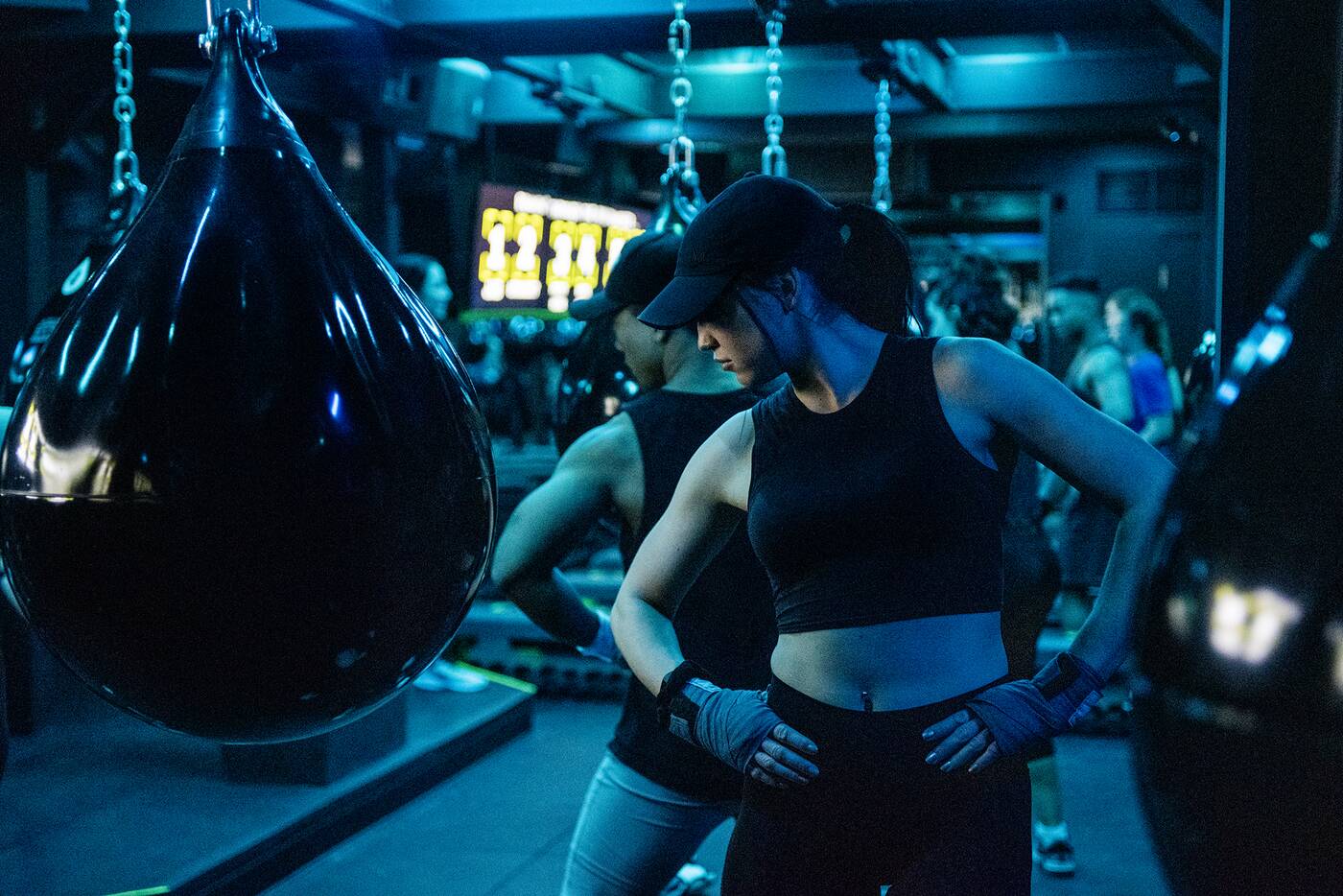 The consistent theme is #LikeAChamp, a motto emblazoned on T-shirts, and displayed on mirrors and screens. 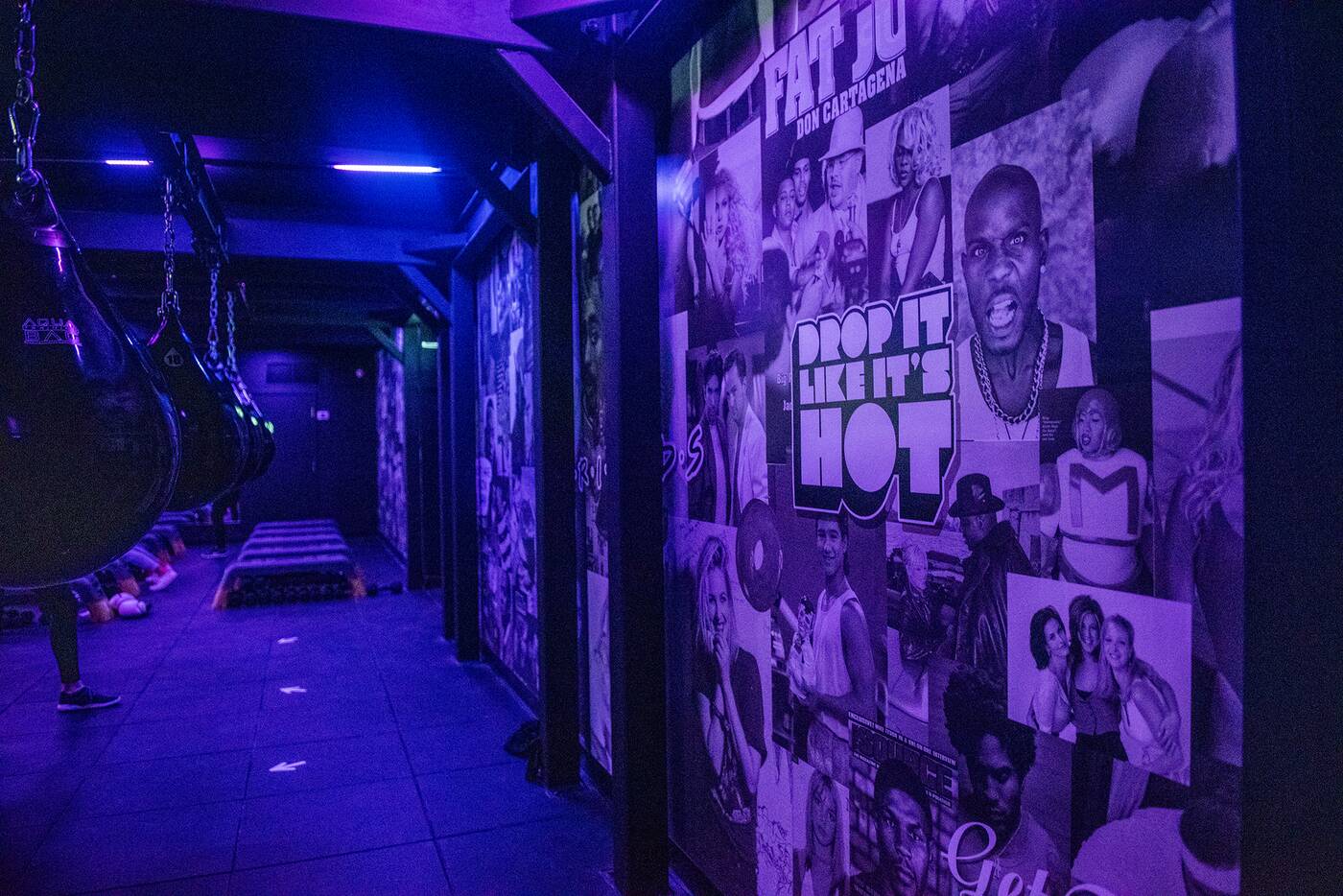 Drop was founded by Lara Marquez. Boxing started out as a hobby for her and quickly turned into a passion and business. She created Drop to be a space that gave people the same type of energy and confidence she felt after boxing. 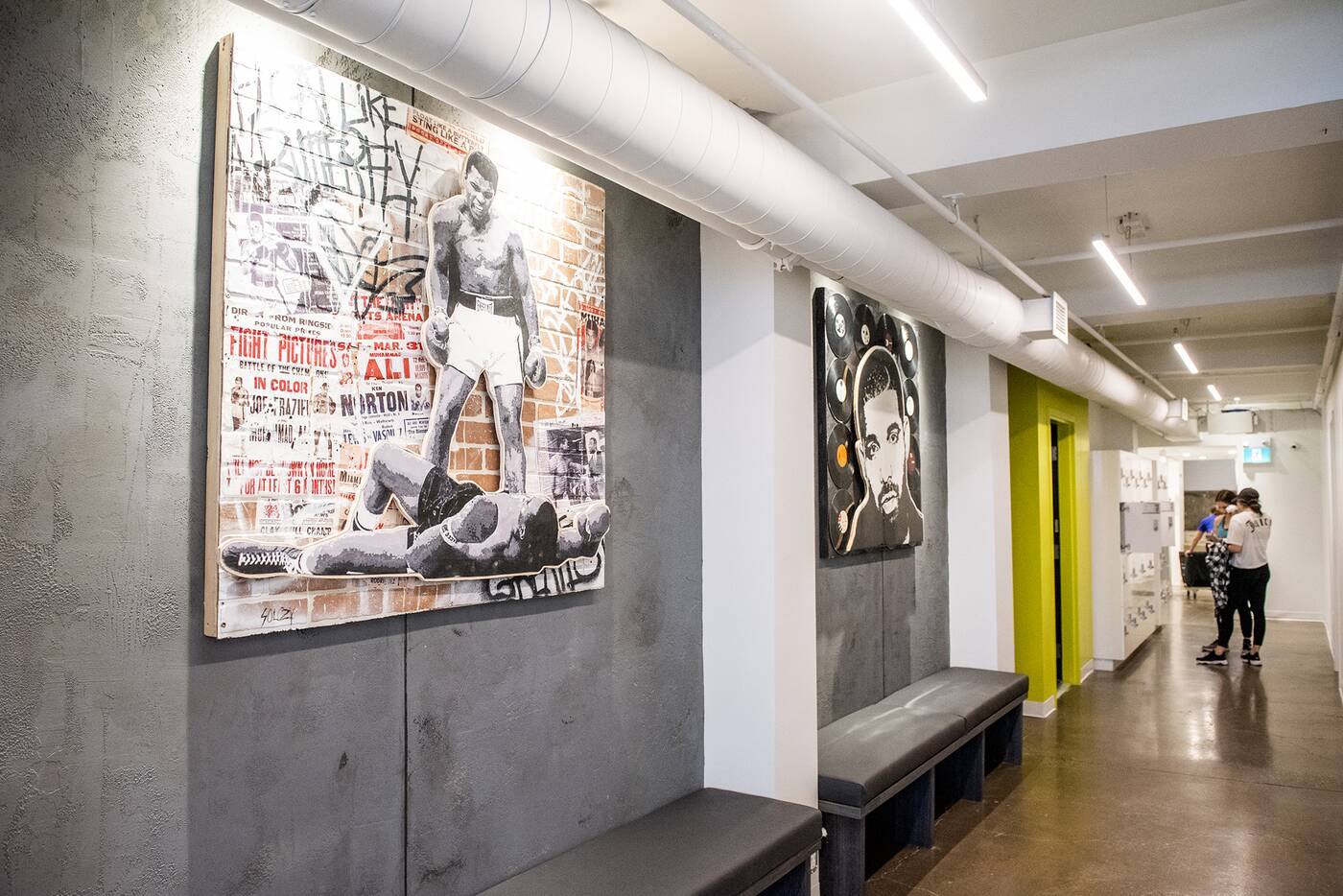 The ode to 90s pop culture in the studio is no coincidence. The 90s is when she developed her identity, and it's why Drop is clustered in 90s music and TV icons, from Dr. Dre quotes on the lockers to TV icons on a black and white collage. 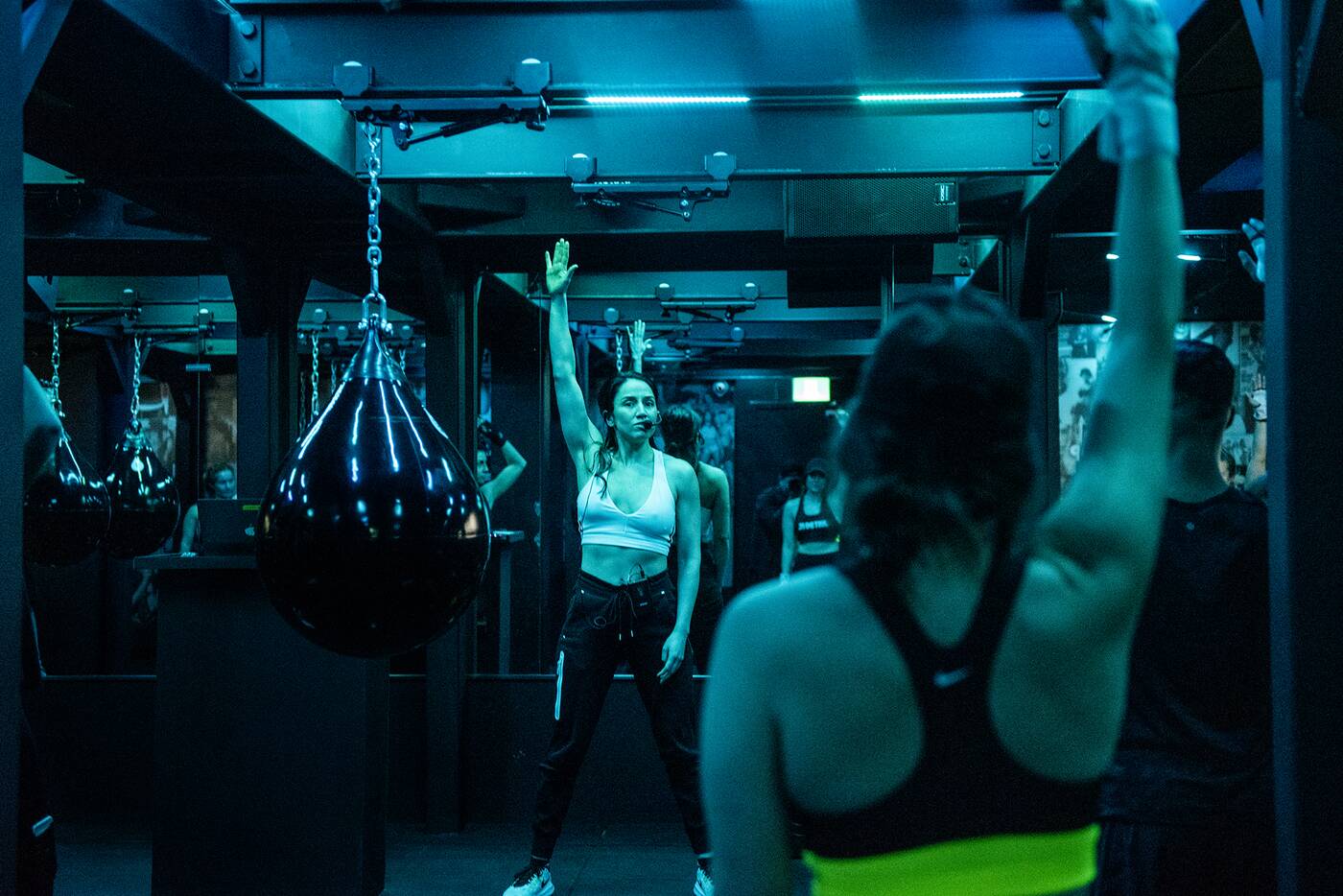 Drop eliminates the stigma that you need to have the right technique to even consider joining a boxing workout. You're not going to have to get into a ring, and you don't need to go up against a trainer or instructor. 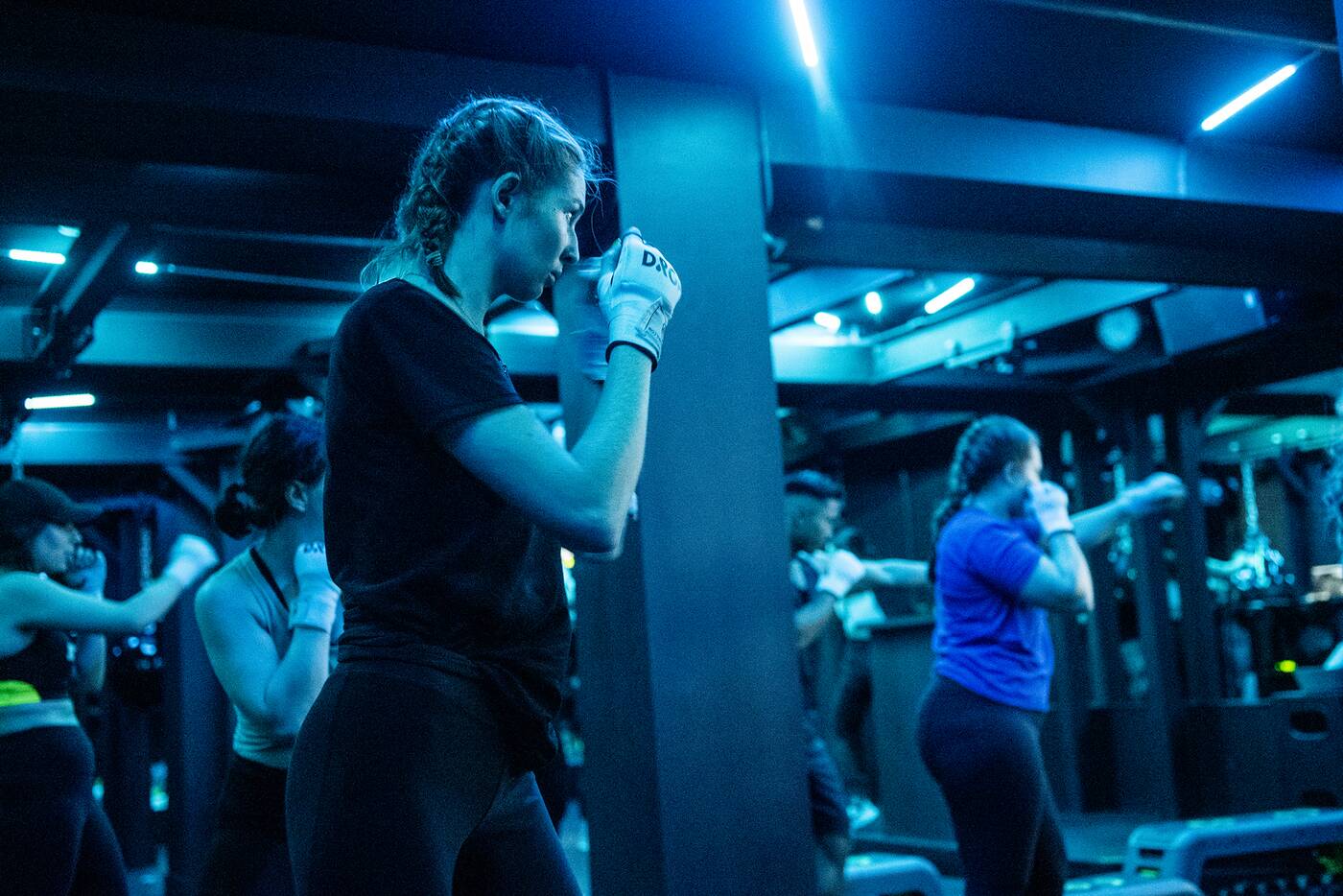 The added benefit of having the workout in a dark room is that it gives you the opportunity to practice your technique without feeling like you're being watched. 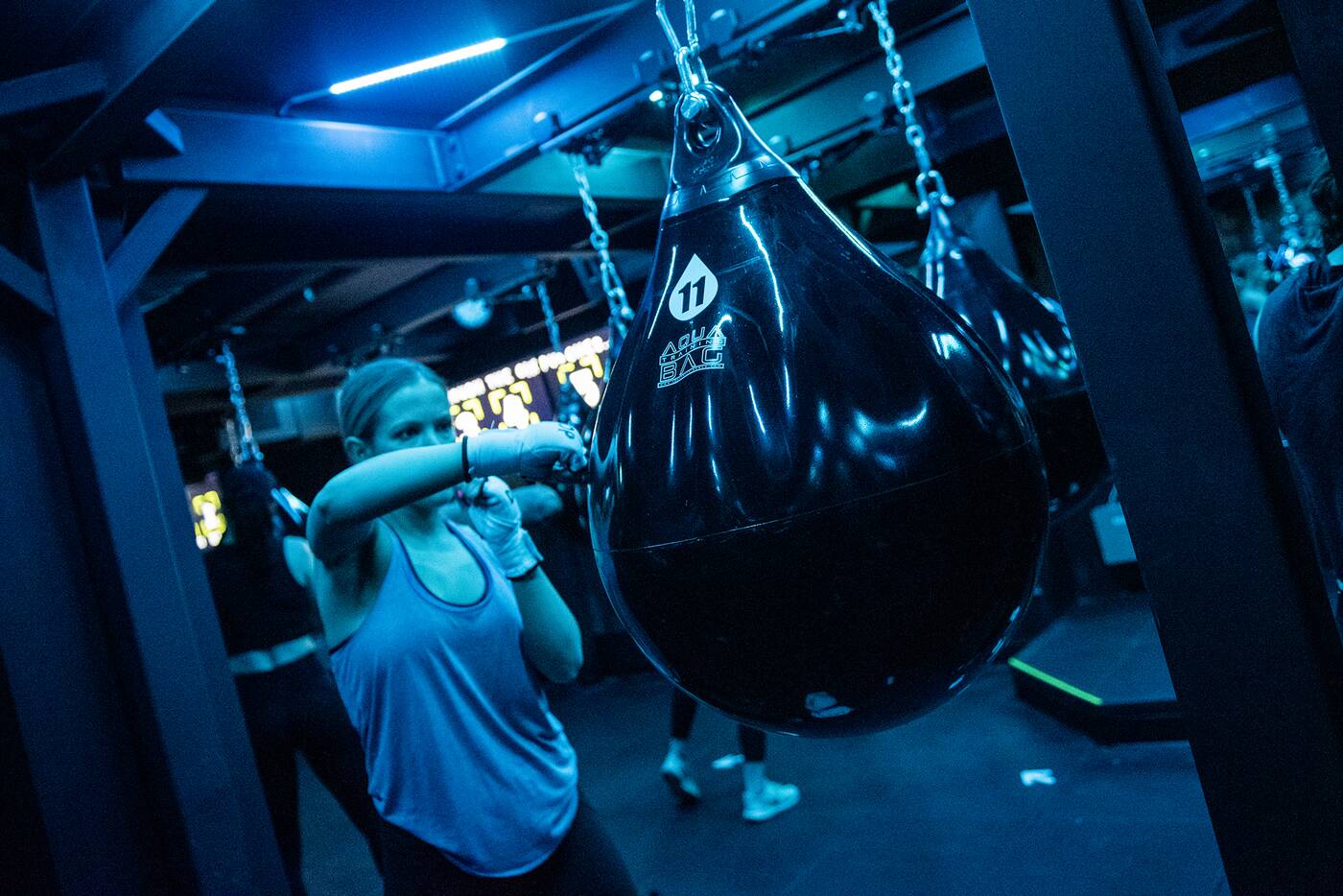 A typical class has 10 rounds, switching between punching the bag and weights on the floor. The teardrop bags are aqua training bags that are easier on your knuckles. 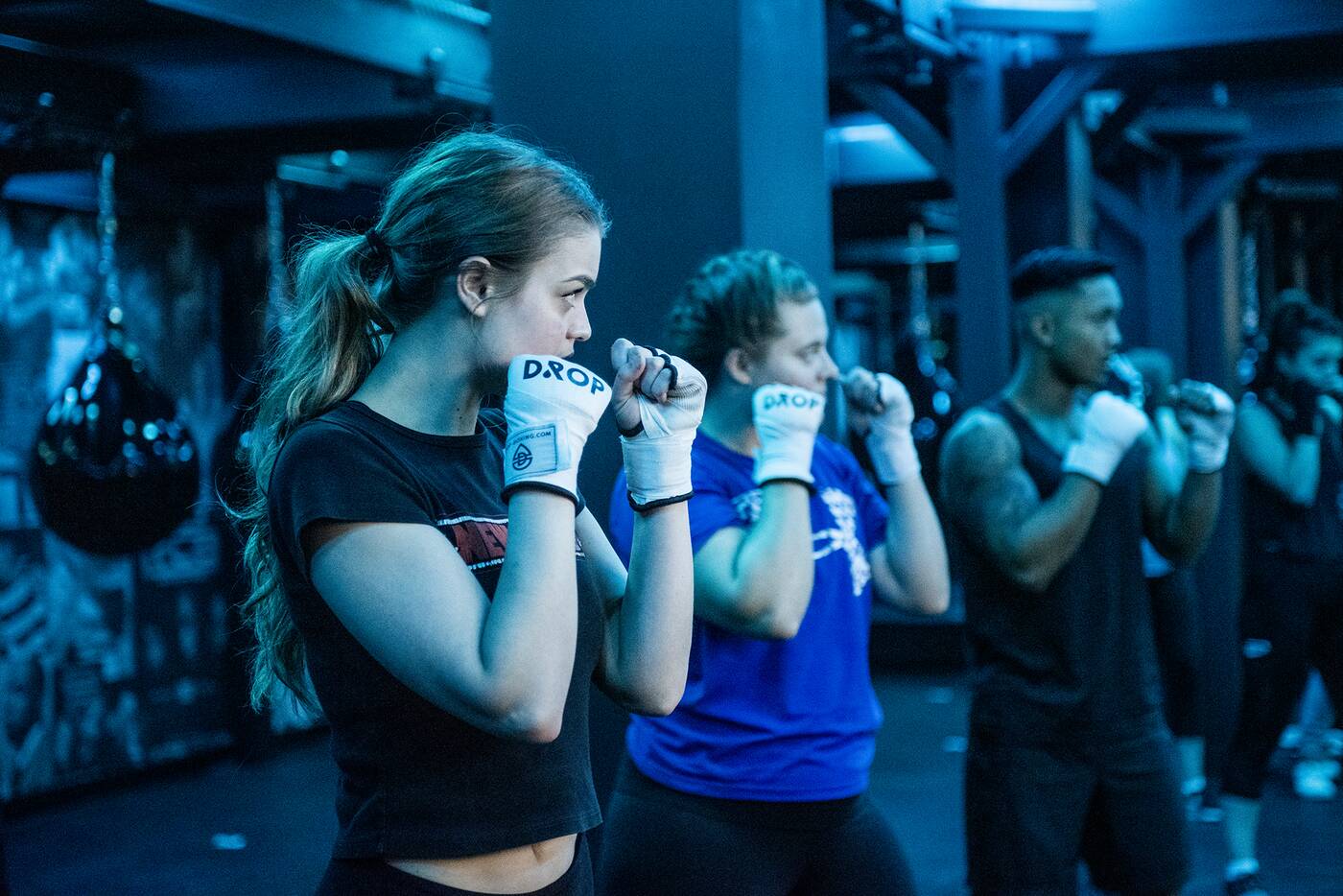 With the traditional long sandbag, you can't hit the proper uppercuts (a boxing reference to the type of punches). The aqua bag absorbs your punches, making less of an impact on your hand and wrist. 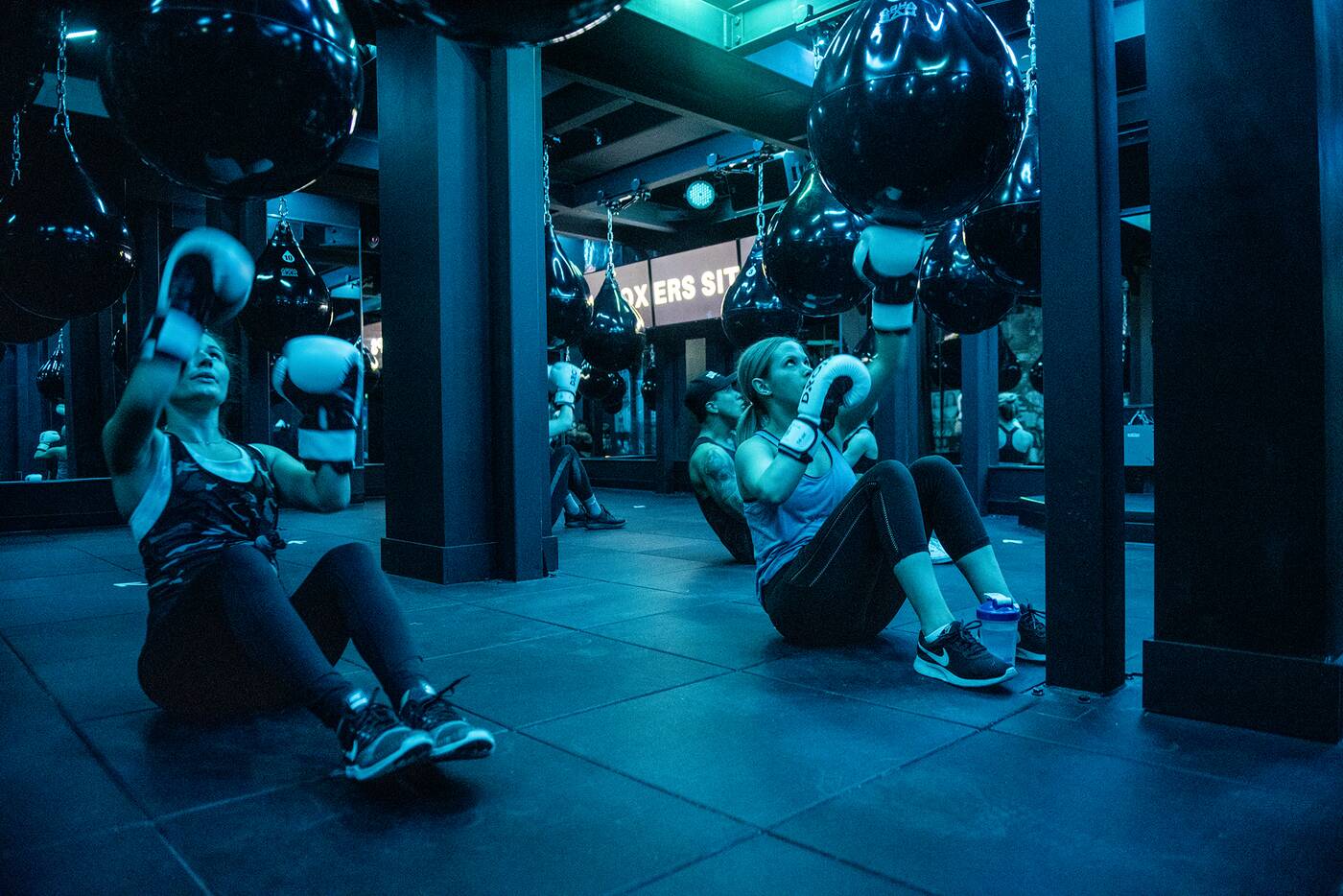 My forgetful mind has a hard time keeping up with the punching sequences. Drop found a solution to that by displaying the sequence of punches on a screen at eye level, visible and bright. 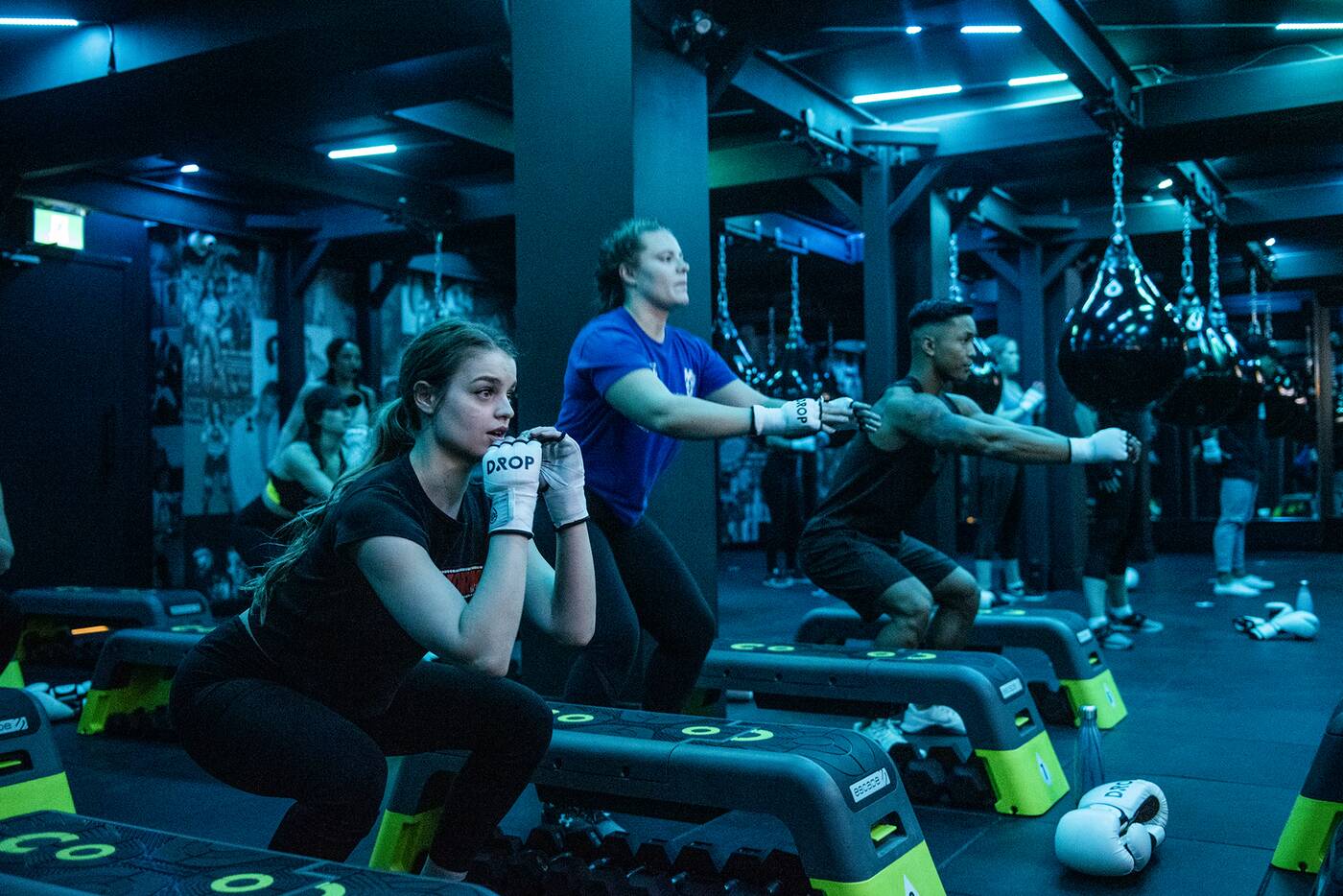 Each boxing move is labeled by the number. In boxing, there are six punches; a jab = 1, Straight = 2, Uppercut = 3 and so on. Because there's so much going on in a class, if an instructor only yells out the combo, you may not be able to keep up. 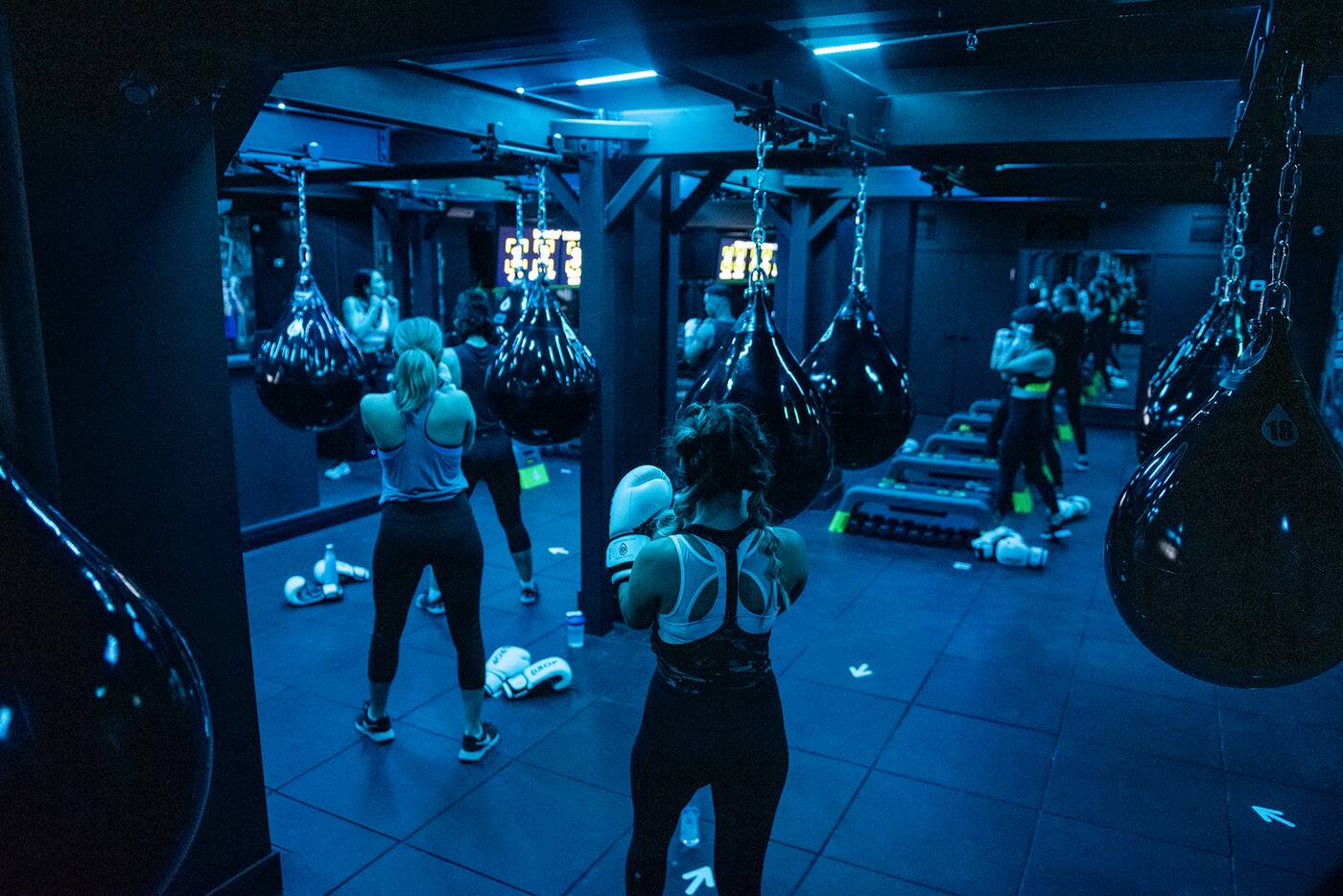 That screen acts as a nice reminder of the sequences. It's one of the added touches that makes this gym so interesting. Each boxing round caps off with a Running Through The Six punch series where you do all the punches in a final burnout round. 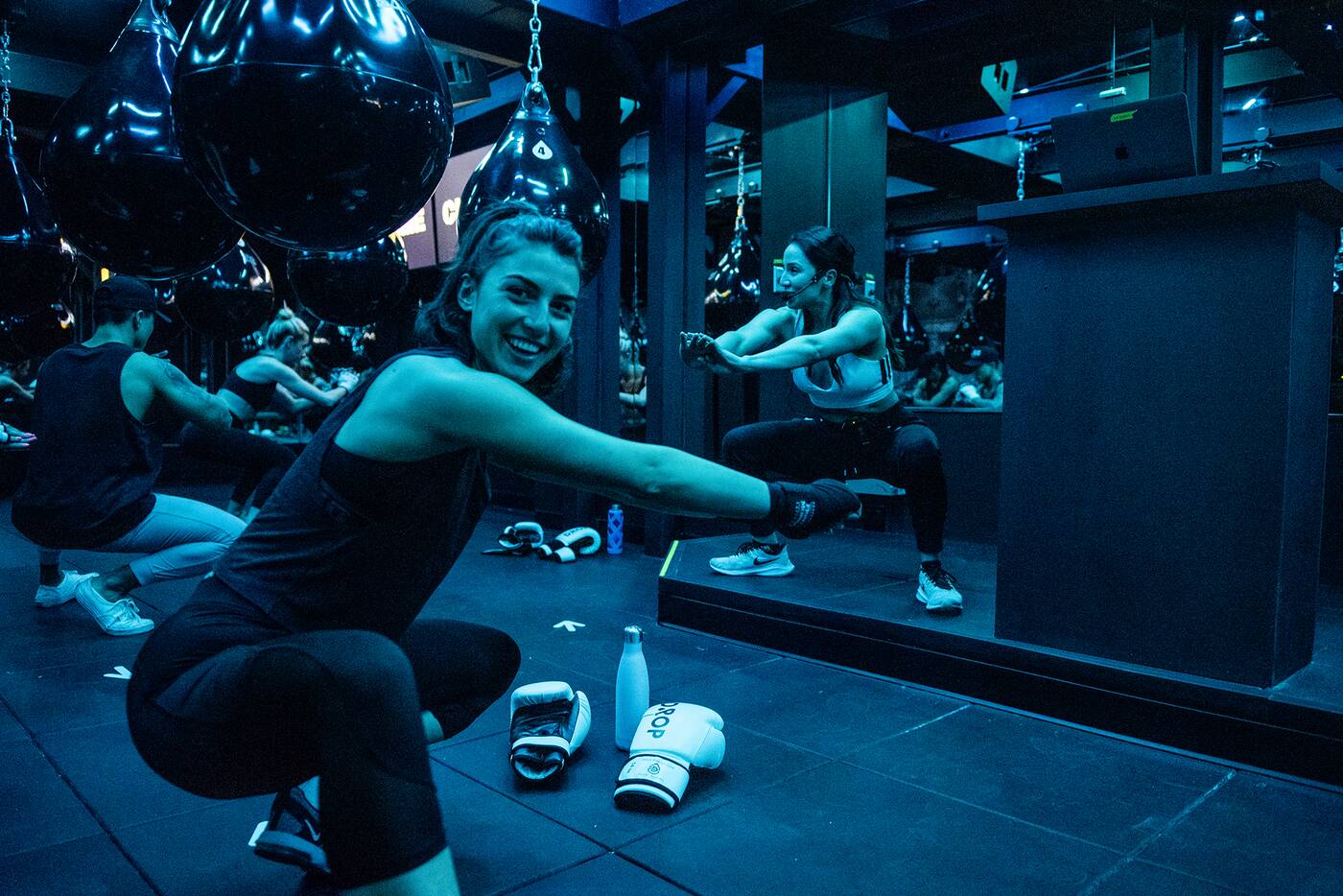 Underneath each bag, there's a white arrow indicating which direction to face and punch. The bags are positioned in a way that they swing into each other, not other people. 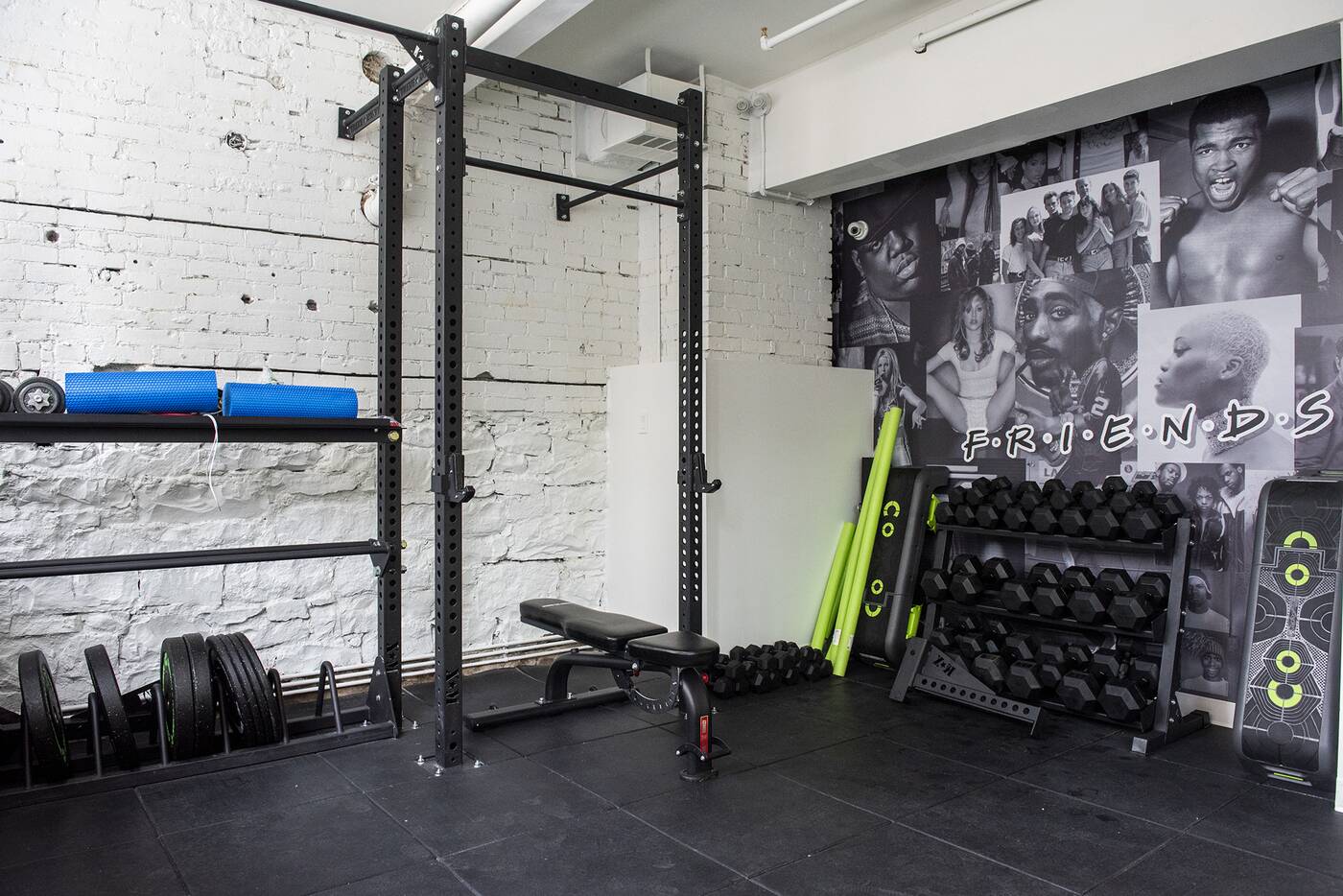 Boxing is great for cardio and upper body strength, but sometimes you want it all in a workout. When you pair boxing with floor exercises, you get a well-rounded, balanced workout routine. 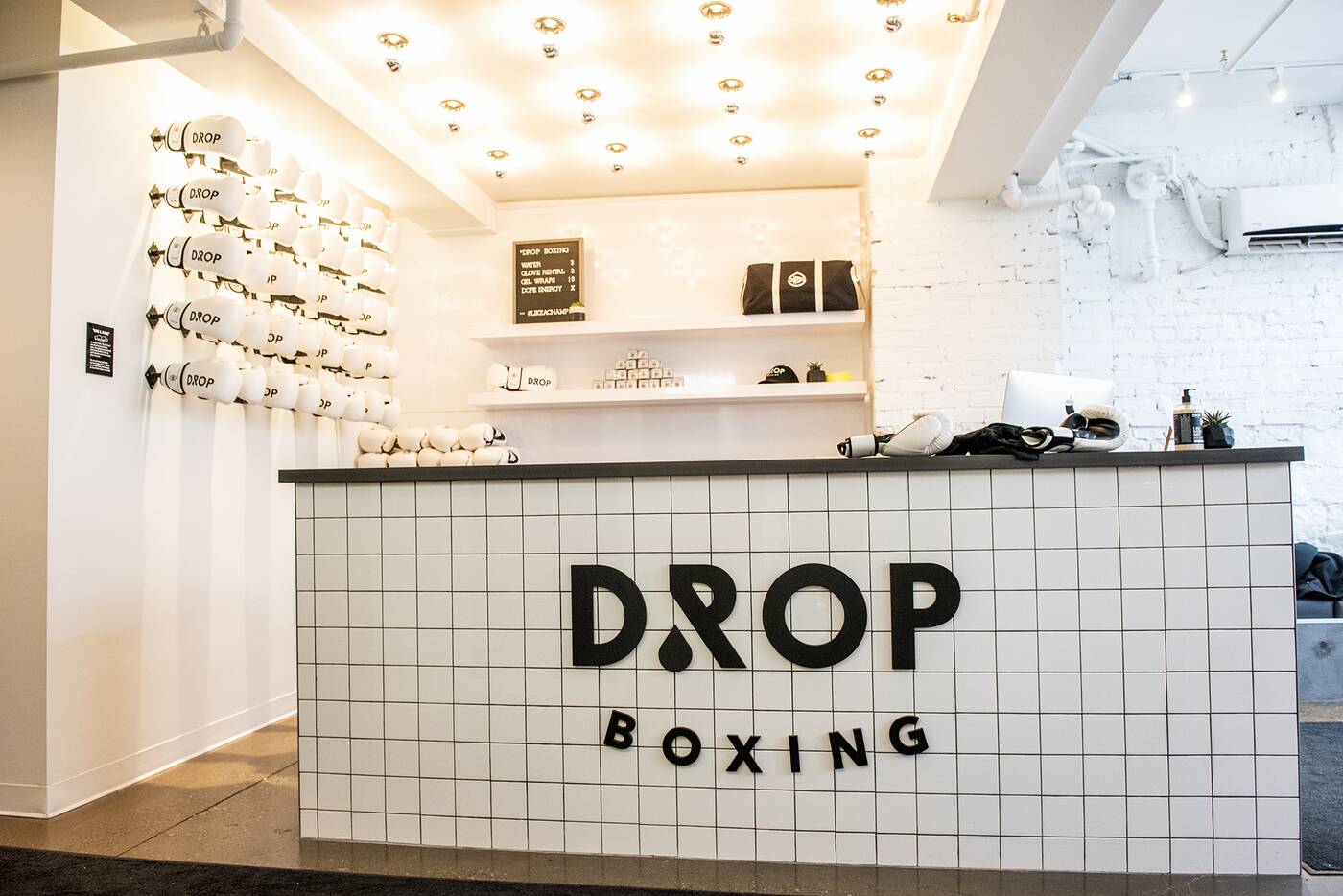 Every day the classes rotate to target a different body part like, Chest, Back and Abs, Shoulders & Arms, Booty & Abs and a full body workout that targets it all. 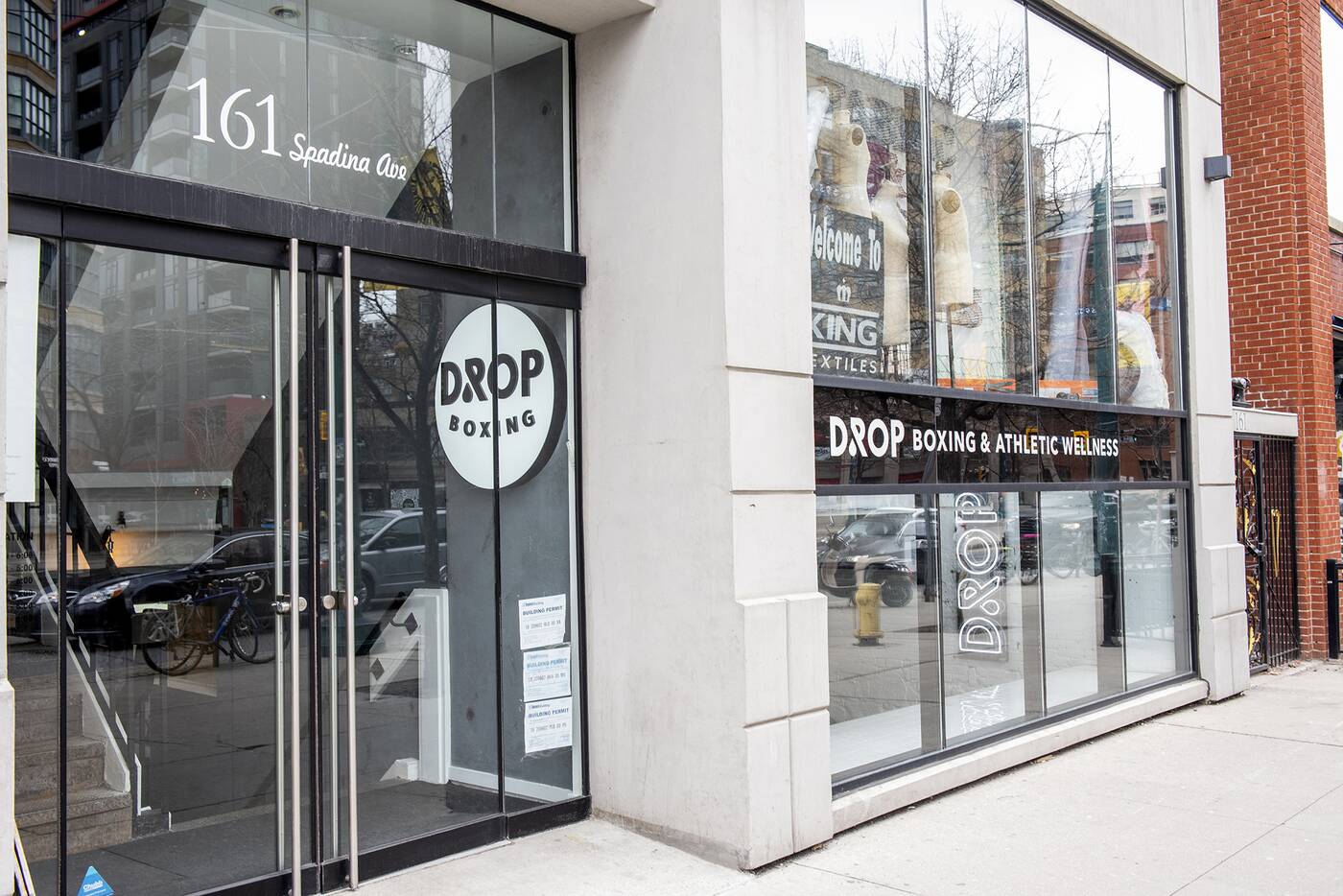