Archers Arena is an archery tag facility located in North York. I visited Archers Arena on a Saturday afternoon, located in a plaza a few minutes walk from Downsview Station. Inside, there's a lounge with all the games you begged quarters from your parents for at the Cineplex Odeon in the '90s as well as some sofas, a coffee table, and soft drinks (all $1) for sale. 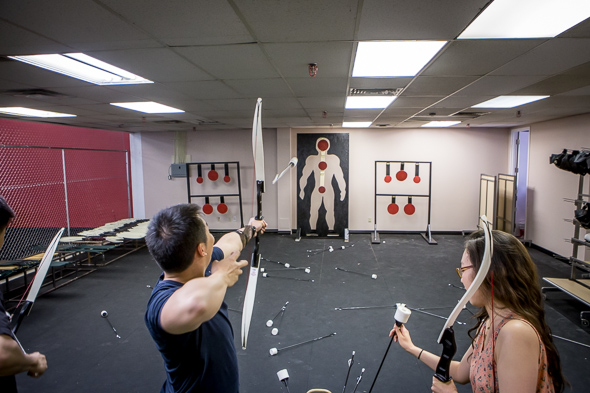 Through the next door is the target practice that serves as the training area complete with a cutout of a person, like at shooting ranges, so you're free to project your personal enemy's attributes onto the cardboard. There's also a small kitchenette, a bank of lockers, a party room, and finally, the arena. 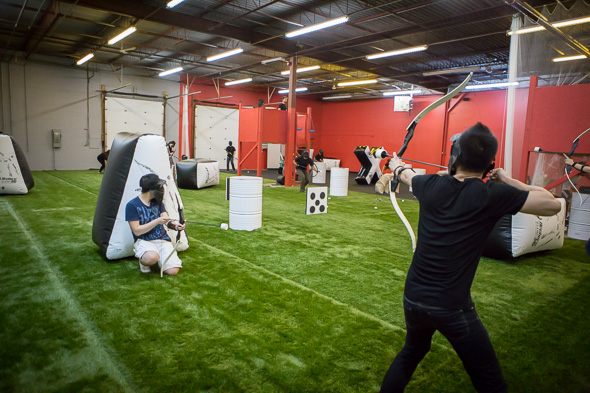 The arena is large, with 8,000 square feet of playing space, and can accommodate up to 40 players, double the maximum players of Archery District. Like Archery District, Archers Arena has big inflatable cubes to hide behind, plus a few extra props in the form of sandbags, barrels and two sniper nests. 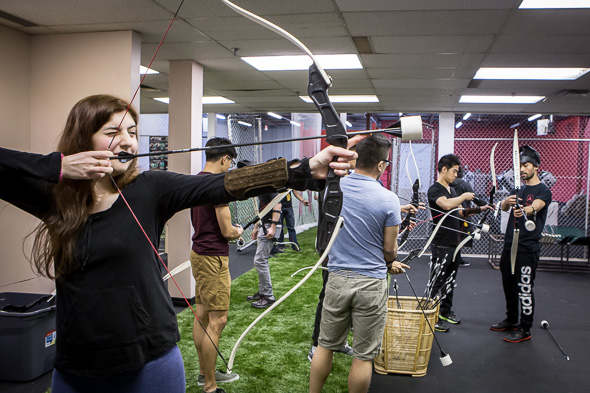 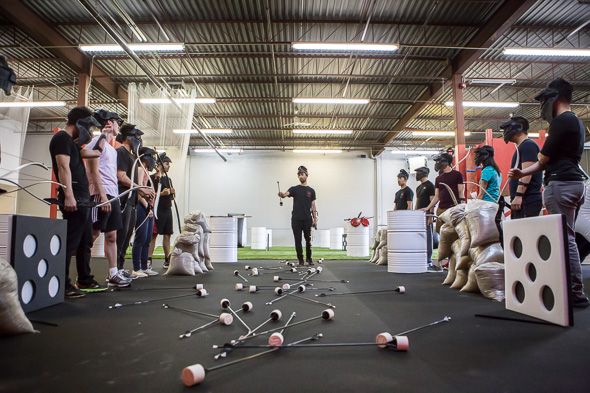 While the freedom to practice shooting targets is appreciated, 30 minutes seemed a little long -- plus, like repeating the mission statement of the company you're interviewing for over and over on the subway only to completely blank in the interview, I was quick to forget every single tip when I got in there and the pressure was on. 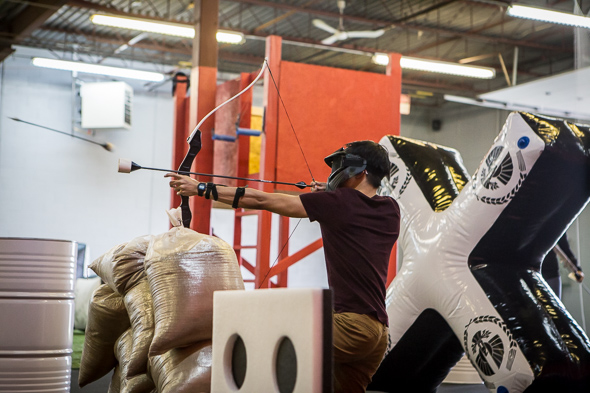 After the training session, we were herded into the arena. The referee walked us through the structure of the game (very similar to dodgeball but each game lasts 10 minutes or until one team's members are all out), emphasized all the safety precautions, and we were ready to go. 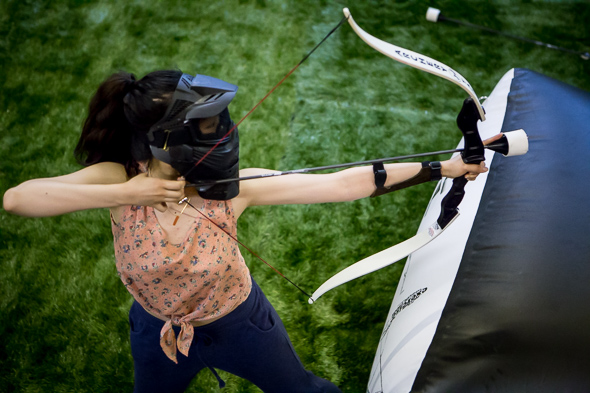 As a game, archery tag is insanely fun. It involves sprinting, hiding, and pretending to be a hybrid of Diana , Goddess of the Hunt, lady-badass Katniss Everdeen , and Natalie Portman in the critically acclaimed Kenny Powers acid trip, Your Highness . 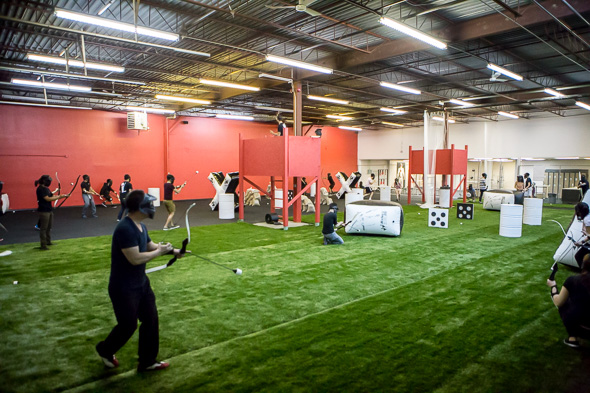 The elements Archers Arena added to the space make it even more challenging and fun. It's difficult to shoot an arrow at someone you don't know, but when someone is watching you from a sniper's nest and is simultaneously visible and unverifiable (PDF), it really messes with your head. 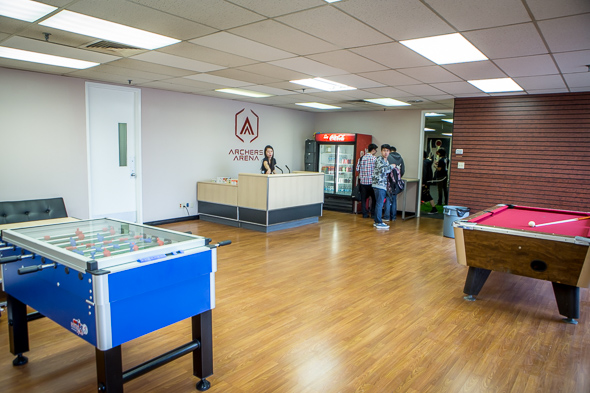 I had a great time at Archers Arena. There are some differences from Archery District in that Archers Arena has a kitchenette, a party room, more obstacles, and an increased capacity for players, so if you're playing with a bigger group or hosting a party, Archers Arena is probably the facility of choice. 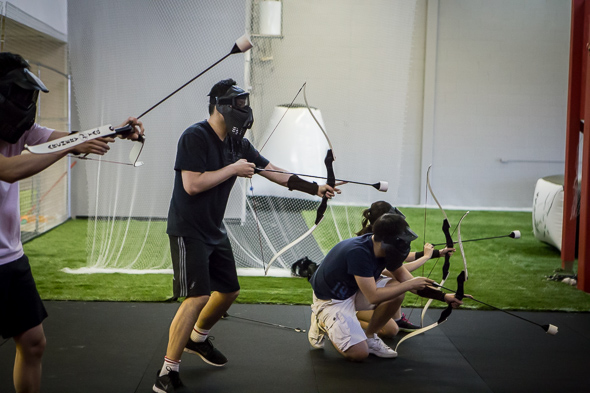 Word to the wise, though, guests can bring in their own food to the kitchenette and party room, but alcohol is strictly prohibited.

If you're with a smaller group or are more about having low-key fun than worrying about the obstacles, it really becomes a toss-up over which endpoint of the subway you're closest to. Like Burrito Boyz and Burrito Bandidos, both are so high quality, you'll have a great experience regardless of which you choose; no need to worry about z-teca -level archery tag from either one. 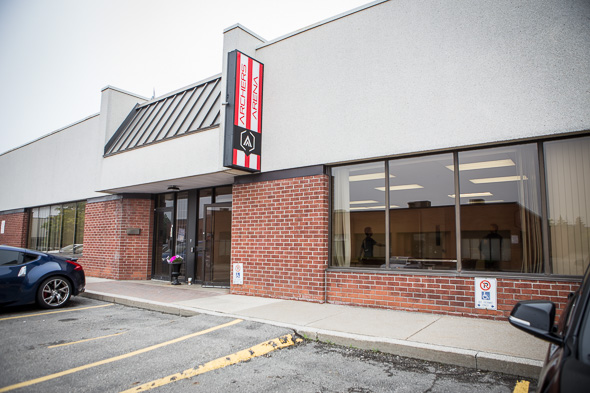