We first wrote about Hogtown earlier this year, when the project was still very much in its infancy, but it's now been released online. The film--written and directed by Nick Latimer--is a dark and thinly-veiled look at Hogtown (or Toronto the not-so-good) from the perspective of Boris Gilmour (a.k.a. Baxi) a pig-masked insomniac who spends his nights piggy-backing shady elements across town at a leisurely walking pace.

The various "pig" characters range from drunks, to "whores, hipsters, douchebags, beggars, and gangbangers." This is a comparatively tame sampling of the many naughty words you can expect to hear over the course of the 13-minute film, which was shot in Toronto and New York.

"They call this city Hogtown," Baxi proclaims in his raspy monologue, "and that's what gave me the idea. You look around this fucking city, this fucking sewer, and you realize it's not just the name...it's a pigsty." The film lays it on heavy--both in bleakness and profanity--but it's all in the name of getting good ol' Baxi to the point where he cracks and unleashes a wave of vigilante justice, complete with volcanic spurts of blood. 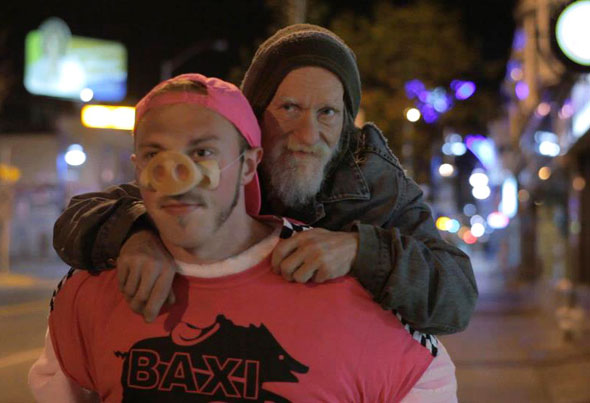 From the laughably serious opening of Baxi enshrouded in fog as a moody trumpet starts to play its film noir refrain, to the Rob Ford doppelganger smoking a cigar and patting his hefty belly, to the basic stereotypes of the city's various factions, it's hard not to chuckle at the sight of Baxi's perky pink porcine nose huffing through it all.

Thanks to Chris Wardle's camera skills, it's a sleek little film, and despite the blood and filth, you can expect puns and witty turns of phrase aplenty--all made all that much better by the ever-present ominous soundtrack courtesy of The Heavyweights Brass Band.

Without further ado, check out the short film below, or through the Hogtown website.