Toronto-set film You Are Here set to open at Lightbox

The majority of films made in T.O. every year try to mask their Toronto-ness. More often than not, Canada's largest city is a stand-in for any no-name, generic urban setting, and other times it passes for places like Baltimore. Up-and-coming Toronto video artist/filmmaker Daniel Cockburn shot his new film You Are Here locally, but in it the city is morphed into a strange, new kind of place that is neither here nor there.

The film played at TIFF last year, and was conspicuously absent from the Canada Top Ten despite raves from critics (as well as Atom Egoyan) and comparisons to a crazed genius by the name of Charlie Kaufman. Finally opening this weekend at the TIFF Bell Lightbox, Toronto audiences will finally have a chance to see, en masse, our city in it's most dizzyingly disorganized state yet.

So where exactly are we if and when we are here? The word "here" is, after all, an adverb of location specifically designed to answer the very question "where?". As mentioned before, the film is shot and set here (as only a writer sitting in Toronto could say), and stars the late, great Tracy Wright in her last acting role. Her character maintains an OCD archive of videotapes and film canisters that she finds lying around the city (the first one we see her encounter is a cassette that she found on the subway while stopped at Yonge and Wellesley).

She is one of many characters who functions almost mechanically within Cockburn's system of things, events, lessons, lectures, and tidbits, ticking like the inner-workings of a camera, all pertaining to the (perhaps) involuntary habits of our neurological consciousness (John Searle was a huge influence on Cockburn's approach here). That all of this is presented in the least confusing, most entertaining package imaginable is hint #1 that Cockburn is one of the most promising young filmmakers working in movies at the moment. Incorporating all manners of film stocks and video resolutions, it's a master class in paying attention disguised as a DIY software demo. 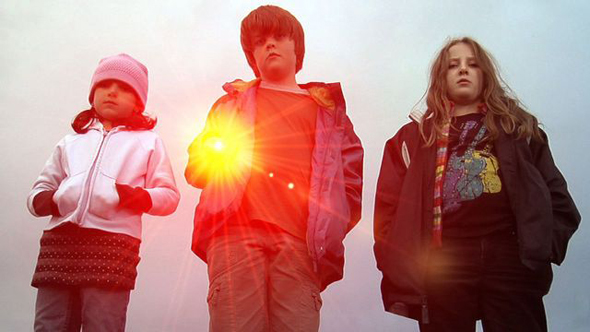 Hints #2, 3, and higher aren't so easily discerned, though they're definitely all there. In fact, not much in this film can be translated to words, despite having been composed almost completely of voiceover narration. By the time un-identifiable characters all over the city start phoning in to an office space to, for lack of a better description, "seek advice on where they should go," You Are Here becomes a puzzle not just specifically designed to appease those with a keen knowledge of the mapping of Toronto's street system, but also a way of dislocating viewers' relationships to traditional settings as we known them in the movies.

This isn't even touching on the film's red dot motif (like the 'you are here' marker on shopping mall maps, as one of dozens of examples), nor the meta-cinema metaphors littered liberally through every riveting 'scene' in the movie, nor its sly nudges to Toronto's avant-garde hero Michael Snow. It's a film of many layers, about layering; one of the most ambivalent characterizations of Toronto as a city in a fictional film in years â triggering images of the city's grid-structure just as it squiggles around, over, and beyond that grid.

You Are Here opens in Toronto at the TIFF Bell Lightbox on August 19 for a limited run. Tickets are available online, by phone: 416-599-TIFF, or in person: TIFF Bell Lightbox, Reitman Square, 350 King Street West.