Edgar Wraps Up The Wright Stuff and Scott Pilgrim

Looking a wee bit haggard four months into shooting Scott Pilgrim vs. The World, Edgar Wright made his final appearance at the Bloor last night. The British filmmaker behind Hot Fuzz and Shaun of the Dead has somehow found time to host a screening series while shooting a major studio picture in Toronto.

Sadly, this is the last event Wright will be curating at the Bloor, as principal photography on Scott Pilgrim is wrapping up during the first week of August.

In this last installment of The Wright Stuff: A Double Bill Pope, Wright introduced his cinematographer on the project, the esteemed Bill Pope.

Wright screened a couple of campy puppet heavy movies, Army Of Darkness (aka Evil Dead 3) and Team America: World Police from Bill Pope's credits - both of which got laughs and cheers from the audience. Pope has also been the Director of Photography on the Matrix and Spiderman movies, Bound and Darkman, to name just a few.

I may have seen Army Of Darkness in the past, but watching a dark scratchy print 15 years after its release, as Pope remarked, was the ideal way to experience the film as he and director Sam Raimi had intended it to come across.

Pope and Wright took to the stage to discuss the cinematographer's experience with laborious old school in-camera special effects on the film (such as creating multiple miniatures of the main character and an elaborate fight scene with a skeleton). "Even though it looks like it's a cheap ass movie," Pope noted, "it was done with love."

Looking at Pope's resume, it's not surprising that Wright chose him to collaborate on his latest project - which is part music, action, love story, and comic book movie. The adaptation of Bryan Lee O'Malley's Scott Pilgrim comic series will have Michael Cera taking on evil killer exes to win the heart of Ramona Flowers (Mary Elizabeth Winstead).

I won't be the only one missing Edgar Wright - besides the screenings, Scott Pilgrim vs. The World has brought in high profile work for our film industry and reports of snow all over town. The production has been fairly secretive (a friend of mine was asked not to blog about his visit to the set). Wright is documenting the Toronto shoot with his own images posted daily and behind-the-scene video updates on the movie's official site. 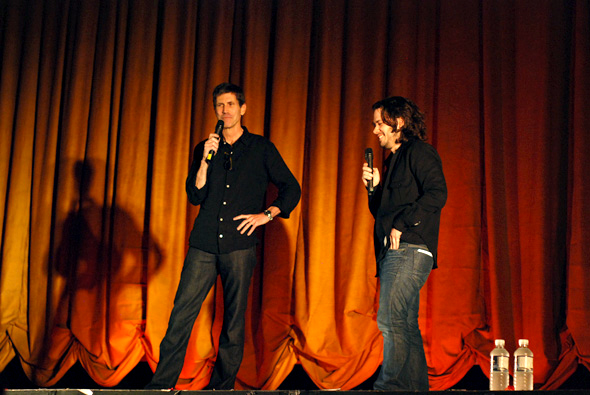