Up the Yangtze with Director Yung Chang

With a Sundance screening and Canada Top Ten award behind it, Up the Yangtze is one of the most buzzed-about documentaries of 2008. The film tells the story of two Chinese teenagers who live near the Yangtze River and whose lives are being uprooted by the massive Three Gorges Dam project.

Screened to a sold-out audience earlier this week as part of Doc Soup, Up the Yangtze officially opens in Toronto tomorrow - Friday February 8th - at the Cumberland. Yung Chang will be in attendance at the 7pm screening on the 8th and 9th, but for those who can't wait keep reading for my interview with the Montreal-based Director.

Why did you decide to make this film?

I first traveled to the Yangtze river in 2002 as a tourist with my parents and grandfather when I went on one of the Farewell cruises, a kind-of "disaster eco-tour" where the aim is to offer tourists the chance to visit the area before it is flooded by the Three Gorges Dam.

The idea for Up The Yangtze was inspired by a surreal moment. We arrived in the southern Chinese city of Chongqing (Chungking), the largest municipality in the world (pop. 30 million). The city reminded me of a scene from Bladerunner. At the city's port, considered the Gateway to the Yangtze, we walked down a steep embankment to get to the waiting ship.

Coolies grabbed our luggage and slung them on their bamboo poles. I arrived at night. Everything was in silhouette lit by neon lights. As we approached the gangway, a marching band began to play YOU ARE MY SUNSHINE and YANKEE DOODLE DANDY. At that moment, I decided to make a film about this surreal journey: the Love Boat meets Apocalypse Now. 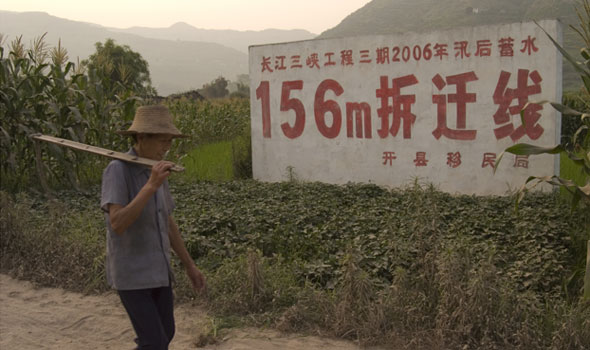 How did you find your two central characters? Why do you think they agreed to open their lives to you?

I found Yu Shui through the cruise ships' recruitment trips when they travel to river towns in search of new employees. Yu Shui was one of the interviewees. They hired her in the winter but she wasn't scheduled to begin training until the summer so I had a whole chunk of time to build trust and friendship.

The key to capturing the intimate scenes was through spending TIME and having PATIENCE. I spent a lot of time with the Yu family and Yu Shui. It's important not to treat your characters like subjects. They become your friends and family. I am still in touch with Yu Shui and the Yu family to this day.

The scene when Yu Shui leaves for work was an emotionally wrenching day. You can see the camera shaking when Mrs. Yu tells her husband that they have no choice but to send Yu Shui to work. We were all in tears.

As a filmmaker, you are emotionally invested in the lives of the people you choose to film. If you cannot be emotionally open but rather try to distance yourself from your subject, then you will lose that trust. It can be difficult and I was constantly questioning my role as a filmmaker, but I realized, that in the pursuit of dramatic storytelling, you must be sensitive and invested into the lives of the participants.

I always knew that Yu Shui and her family were going to be central in telling the story of the human impact of the Three Gorges Dam. I found Chen Bo Yu through the recruitment process. His character was important because I wanted to have that contrast between the two: city vs. countryside, little emperor vs. peasant girl.

I had no idea what the outcome would be between Yu Shui and Chen Bo Yu which proved to be quite a surprise. But I also filmed with a few other subjects. I had plenty of time - I spent eight months living and filming in China. For example, Campbell "Soup" He, the river guide, figured much more prominently in rough cuts of the film. He used to be a coolie to pay his tuition when he was an English student. He was a self-described "country bumpkin". His father is still a farmer in the countryside. In the end, his story just didn't measure up to the main characters.

I also followed a factory worker fighting for compensation and a group of villagers protesting land development. Up The Yangtze would have been a sprawling 10 hour epic if we didn't cut these scenes. I'm sure they will find their way into the DVD Special Edition.

What were some of the challenges in filming on the boat? I imagine most tourists were probably not too excited about appearing on camera.

There were very few challenges in filming on the boat and, in fact, most of the tourists, because they were on a vacation, were very excited to be on camera and to be a part of my film. Maybe the most difficult was trying to make the boat as interesting as possible. In the end, the boat acted primarily as a vessel, a perfect microcosm to explore modern China.

I think that it could have been very easy to lambast the colonialist aspects of the tourists to an extreme like the film Cannibal Tours. Tourists make easy targets. That was not my intention. I wanted to show, through the tourists, a Western perspective of Chinese culture. So they became a sort of metaphor for the way one culture can never truly understand another culture - there's always a buffer like the separation on the boat between onshore and offshore life.

Why do you think the tour operators agreed to provide you with the access they did?

I was very clear with the American-managed tour company of my intentions for making a film that explores China from all sides, 360 degrees. I was lucky enough that the management were very receptive in allowing me to capture the upstairs/downstairs aspect of the boat ride. The family who owns the company are very philanthropic and I wish to thank them for allowing me access. 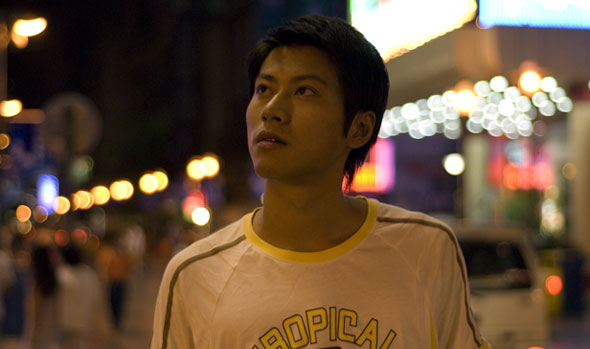 Were you surprised how the stories of the two central characters unfolded?

As a documentary filmmaker, the moments you thrive on are the unexpected and spontaneous. I had no idea that the transformative process for the two Chinese teenagers would result in such dramatic denouement. It can be very difficult as a filmmaker to go home at the end of the day after filming such raw, emotional and intimate scenes.

Filmmaking, for me, is like trying to tame the wild beast you created. I feel like I am always running after the tail of the dragon, trying to catch up with the story. I think, because Up The Yangtze is a documentary, the movie had a naturally built-in narrative structure. By the end of the film the river was going to flood and relocate the family I was following. I had no choice but to be at the mercy of Fate.

Have you kept in touch with any of the characters? What are they doing now?

Since completing the film, I went back to China in August to show Up The Yangtze to the Yu family. Yu Shui later wrote me an email explaining that she was now able to see her destiny. She decided to leave the boat and finish high school. EyeSteelFilm helped to pay for her tuition.

I've since begun a fund through a great site called GiveMeaning to help the Yu family for the next 5 years to cover medical/health, food and supplies as well as to pay for the children's school education.

Most importantly, I found out that Mr. Yu desperately requires an eye operation or he will not be able to find employment. We've managed to raise a bit of money through the site. Audiences can leave a movie feeling moved to action and this fund is a great way for people to channel the hardship chronicled in the film into something positive.

When did you film this? How long did you follow these characters?

I researched and developed the film for 4 years which was a crucial period for me to discover how I wanted to tell the story. Principal photography was from April to December, 2006 when I lived in Chongqing. Most of 2006 was spent with the central characters.

Up The Yangtze opens February 8th at the Cumberland. Yung Chang will be in Toronto will be in attendance at the 7pm screenings on Feb 8th and 9th for a Q&A session following the film.

All photos from the NFB web site