Halloween costumes in Toronto can get pretty intense, but there are also lots of options if you just want to pick up a quick mask and be on your way. Whether your costume is more of an excuse to wear an outrageous outfit or a full-on gore fest, you're sure to find the perfect disguise for the evening at one of these places.

Here are Halloween costume stores in Toronto by neighbourhood.

It's a go-to for a reason: the Value Village in this neighbourhood is pretty much a foolproof stop for a Halloween costume that won't break the bank. There are other locations in the city too, so find one close to you and get to scaring.

It's My Party is a place people rely on for their Halloween looks, and there's something for everyone with men's, women's, kids' and even plus size and pet costumes. Be anything from a mermaid to a cave person.

Army surplus gear is a super easy option for a costume on Halloween, especially if you're one of those people that finds it tough to come up with ideas. Grab some gear at Camouflage and you're good to go.

Everyone knows Spirit Halloween, and now is their time to shine as one of the most well-known costume shopping destinations. It's basically impossible to walk away from here empty-handed.

Rent the ultimate flapper fit from Fitzroy, a studio in this area that lets you borrow fancy dresses. Whether you're going for a true 1920s look or just want to be a real life princess for Halloween, they'll make sure you have the most glam costume at the party.

There are tons of great places in this neighbourhood to pick up a sweet vintage outfit or costume for Halloween so you can really make a day of it, but Exile has become the place to go for a wide range of costumes with a retro feel. 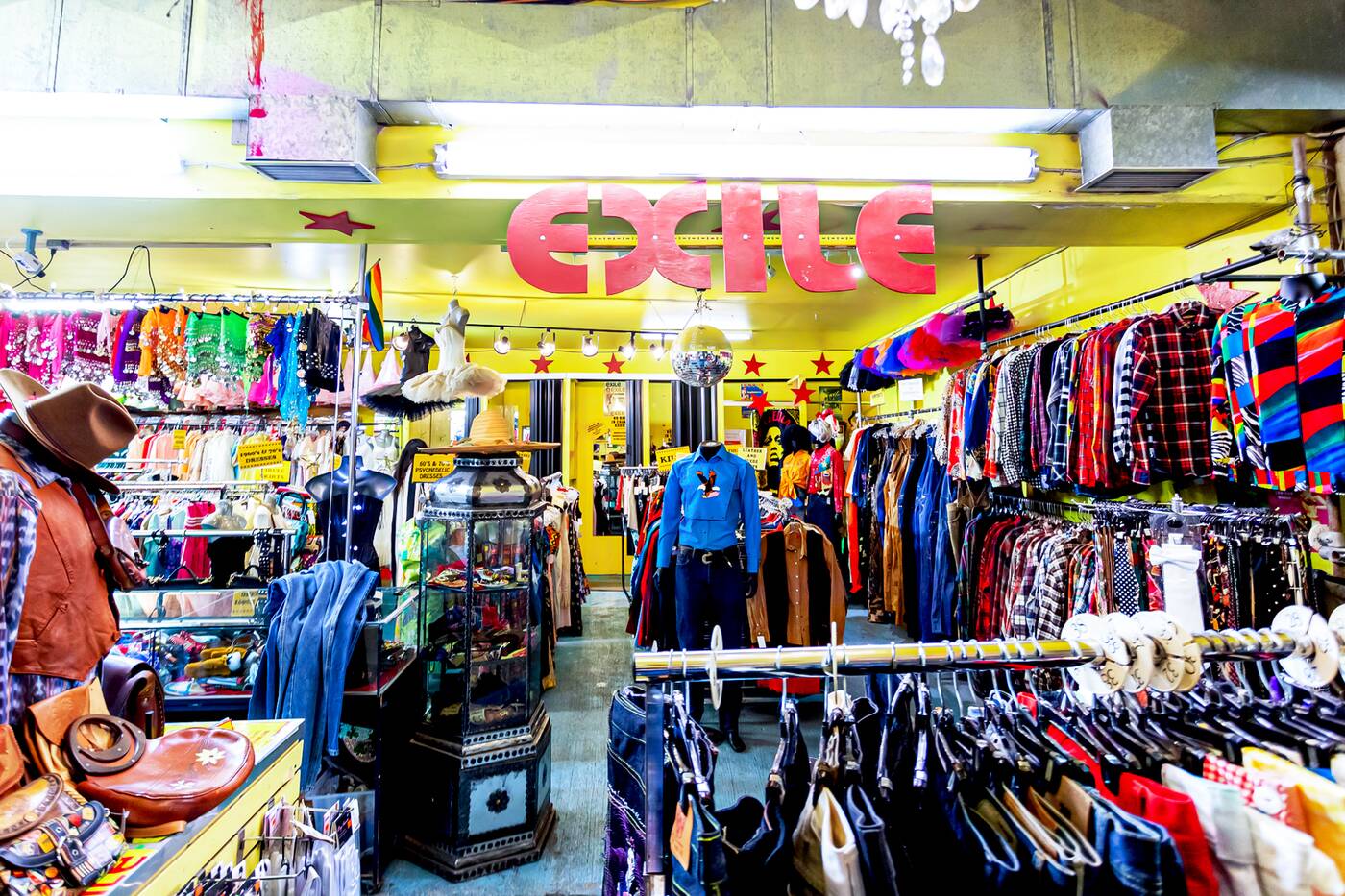 Thunder Thighs is known for renting to productions, but an average Joe can also walk in and access their expansive collection of professional-quality costumes.

Dollarama is always a great last-minute option to hit up on Halloween for all kinds of cheap masks, props and costumes, and you can even pick up a little candy on the side. There's bound to be a location near you if you're not close to this one.

Candy's Costume Shop has for years catered to those who take their costumes seriously, with not only costumes, accessories, masks and props but also special effects makeup and wigs.

If you're digging a retro look for Halloween, this is a great area to find it with lots of vintage stores, and Public Butter is one of the best. There's a huge selection so there's lots to look through, especially if you're planning on going out as someone from decades past.

If you don't have a lot to spend but want lots of choices, head to Black Market to dig through racks of affordable grungy clothes that would be perfect for a punk costume, plus a wide selection of other vintage apparel. Plus, a subterranean location brings the creepy Halloween vibes. 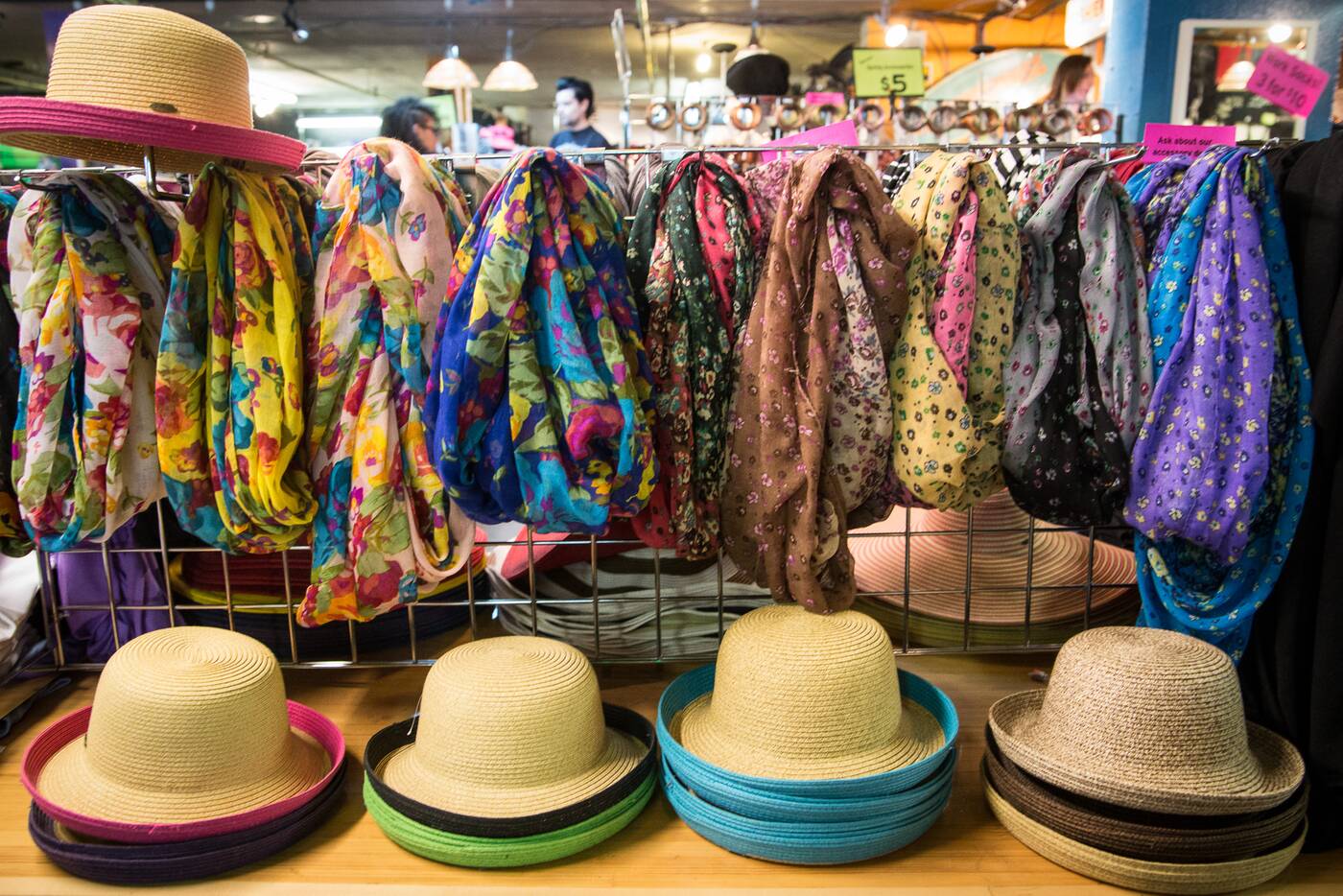 You can find all sorts of costume accessories at Black Market. Photo by Jesse Milns.

There are several Toronto location of Party City where you can pick up everything you need for your costume or even an entire Halloween party, with costumes for adults, kids, groups, as well as decor and pumpkin carving supplies.

Pieces plucked from the 1960s and 1970s at Flashback will make you look like you just stepped out of a time machine on Halloween night. Grab some cowboy boots for a funky Western look, dress up as a biker in leather, or even snag a suit for a CEO costume.

If you're not afraid to get a little racy with your costume, hit up Stag Shop for all the sexiest outfits. Who knows, maybe they'll even be useful past Halloween night.

Theatrics Plus is where Halloween fans go to get their costumes as well as items like makeup, masks and even contact lenses. They also have lots of balloons to spruce up your space for a party.