A unique retail store and cultural staple on Toronto's Ossington strip will be closing its doors for good next month after more than a decade of serving the community — but it's not all sad news for customers (not the ones who value deep discounts, at least.)

Town Moto, a motorcycle lifestyle shop at 132 Ossington Ave. announced earlier this month that it would be winding down operations in October, with an initial expected closure date of October 31.

A note posted on the door of the business seen Sunday, however, states that the physical store will now actually close on October 2 as a result of overwhelming customer response and fast-dwindling inventory. 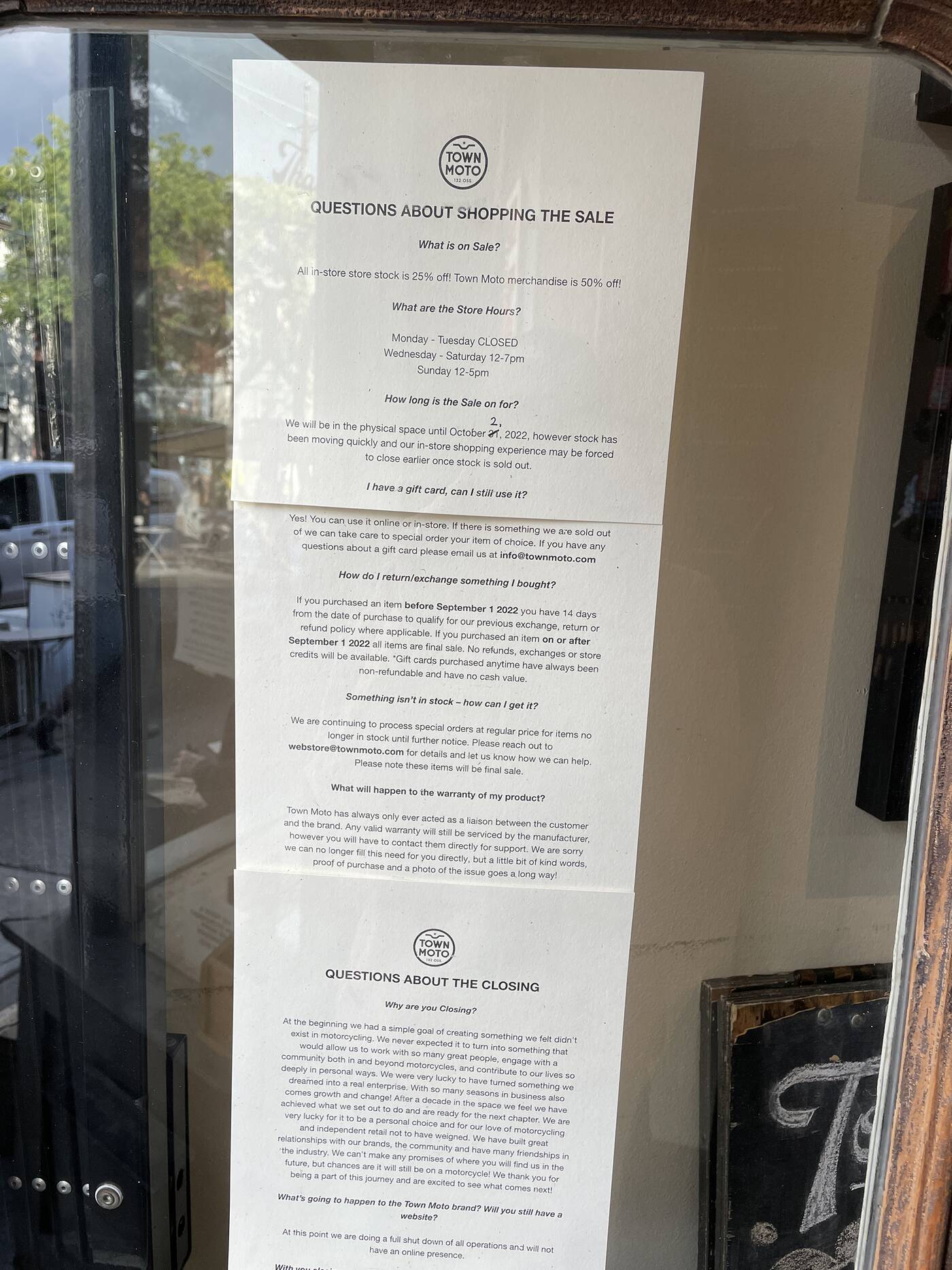 A note on Town Moto's door explains why the beloved shop is closing and what customers can expect.

The shop notes that it could close even earlier if inventory sells out, and it very well could thanks to insane clearance prices: As a final thank you to fans and friends, the business is selling all remaining in-store stock for at least 25 per cent off, making this the perfect time to invest in a cool biker jacket or silver skull ring.

Helmets, jackets, gloves, boots, sunnies, t-shirts, sweaters, toques, gifts and more can be found in addition to what the shop bills as "everything you need to maintain, modify and build a motorcycle including maintenance products, parts, tools and manuals."

Town Moto-branded merchandise (including their many awesome t-shirts) is going for a staggering 50 per cent off, with all sales being final.

"At the beginning we had a simple goal of creating something we felt didn't exist in motorcycling. We never expected it to turn into something that would allow us to work with so many great people, engage with a community both in and beyond motorcycles, and contribute to our lives so deeply in personal ways," reads a letter on the store's front door.

"We were very lucky to have turned something we dreamed into a real enterprise. With so many seasons in business also comes growth and change! After a decade in the space we feel we have achieved what we set out to do and are ready for the next chapter."

The Town Moto crew goes on to say that they've built many great releationships with brands, the community, and individuals... one of whom happens to be Khal Drogo himself, the actor and motorcyle enthusiast Jason Momoa.

Momoa isn't mentioned in any marketing materials, and staffers aren't the types to drop his name, but rumour has it the star was a big fan of Town Moto. He's been spotted leaving the business on several occasions and appears to have attended some of the many community events hosted by the shop while filming in Toronto.

The Aquaman star was caught on camera last April revving his engine outside the shop and cruising up and down Ossington, but that's not what makes Town Moto cool. Not by a long shot.

"You don't have to own a motorcycle to be welcomed at Town Moto, we offer an assortment of casual clothing, books, and accessories for the everyday! Need advice on how to get started in motorcycling? We offer that too!" reads the store's website, embodying in a sentence why people in the neighbourhood love Town Moto.

"The motorcycle community is a huge part of who we are and what we do. Throughout the year we make every effort to foster and support our riding community with free tech nights, events, sponsorships, and by promoting other inclusive events in the community."

Anyone familiar can agree that store had a major (if not the most major) impact on Toronto's now-thriving motorcycle culture. No word yet on what might be replacing them or if they'll reopen elsewhere.

"We are very lucky for it to be a personal choice and for our love of motorcycling and independent retail not to have weigned," reads the closure note on the shop's door.

"We can't make any promises of where you will find us in the future, but chances are it will still be on a motorcycle! We thank you for being a part of this journey and are excited to see what comes next!"