Ordering clothing online can often be risky business, and anyone who's a regular e-shopper likely has more than a few stories about receiving tragically ill-fitting garments or items that are nowhere near as described.

But one Toronto man's story may just take the cake when it comes to disappointing deliveries.

Like many people, Mark MacDonald gets hyped about every new release from the ongoing collaboration between classic Canuck clothier Roots and Drake's OVO brand, born here in Toronto.

He quickly ordered one of the $168 heritage hoodies from the newest line as soon as it hit the online store back in November, but started to get worried when he had yet to receive shipping confirmation after a few weeks.

Though the self-proclaimed huge OVO supporter was "super excited" about the order at first, he found that the customer service of the brand left much to be desired when he actually tried to contact them.

After more than one month and multiple emails to OVO customer service, MacDonald finally got a response citing COVID-19 issues, and was refunded his shipping fee.

But, more time passed, and almost two months after he'd placed his order, he still hadn't received his package and so sent yet another email, to which he got no response.

Finally, when his wife initiated some further, more heated communication, he received an answer saying that his hoodie would be sent out immediately, and that he could expect it within two days.

What MacDonald received instead was shocking and, frankly, quite hilarious. 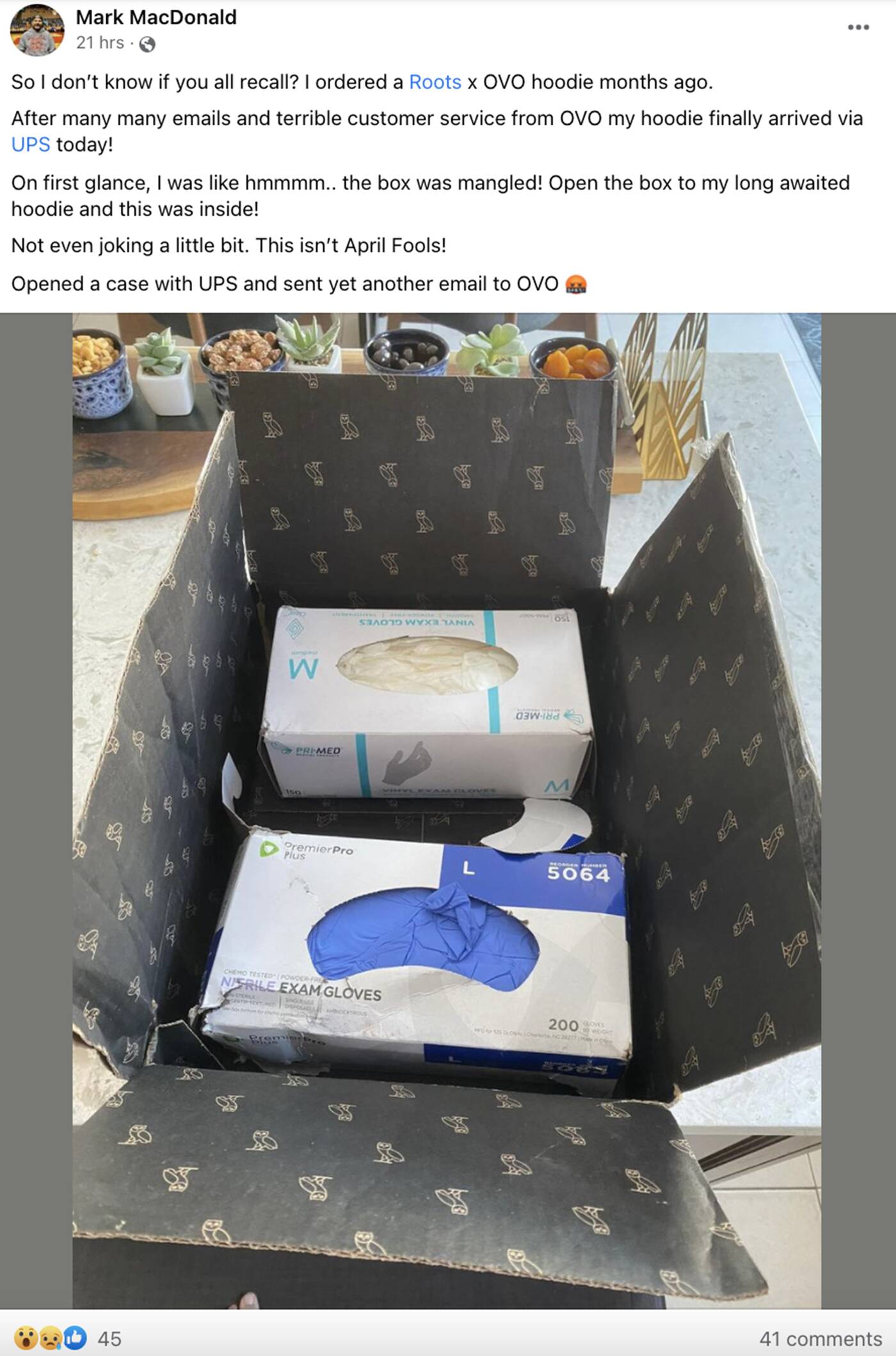 Mark MacDonald shared his shock about the package with members of the 9.8k-strong OVO Market (Worldwide) Facebook group on Thursday.

"On first glance, I was like hmmm... the box was mangled," he wrote in an OVO Market Facebook group on Thursday.

"Open the box to my long awaited hoodie and this was inside! Not even joking a little bit. This isn't April Fools!"

Attached with the post is a photo of a beaten-up box that is clearly OVO branded — so not another person's random package by any means — and is largely empty, save for two open boxes of... medical gloves?

"The box was destroyed and clearly opened, and inside was two boxes of surgical gloves. No hoodie," he confirmed to blogTO. "My wife lost it and sent OVO an email. They didn't answer, but all of a sudden I received a refund on my credit card."

The less-than-enthusiastic customer says UPS has now launched their own investigation into the matter, but he still has not heard any acknowledgement of the situation from OVO.

It remains unclear whether the mixup happened at the packing stage or whether the box was tampered with while in UPS's hands, but regardless, the Toronto resident is not very impressed with how OVO handled his questions and complaints over the last few months.

"What boggles my mind is that OVO doesn't have a phone number. You have to email them and they respond if they want to on their schedule, not in one-to-two days as the auto-reply says," MacDonald fumes.

"They hold themselves at this higher stature and treat their customers like absolute trash. It would be nice to have respect for their loyal, overpaying customers and be an upstanding Canadian company, but it’s clear that they really don’t care."

He adds that he will not be buying anything else from the brand moving forward, "and this comes from a guy who waited in -20 C weather at 5 a.m. for the sample sale a few years ago."

OVO did not reply to a request for comment or further information by the time of publication.

Meanwhile, a few fellow OVO shoppers are empathizing in the comments on MacDonald's post, sharing their own feelings about the company's customer service and online store experience.