Toronto's forgotten theatre has reopened as a market and steampunk cafe

Parkdale Hall is serving as a reminder that not all of Toronto's historic buildings are destined to become condo podiums.

The new space is taking a nearly opposite approach to business by making nostalgia a central theme of how it operates.

The brick property under new ownership at 1605 Queen St. West—first opened as Parkdale Theatre in 1920, referred to simply as The Parkdale—unveiled its newly renovated interior in October. 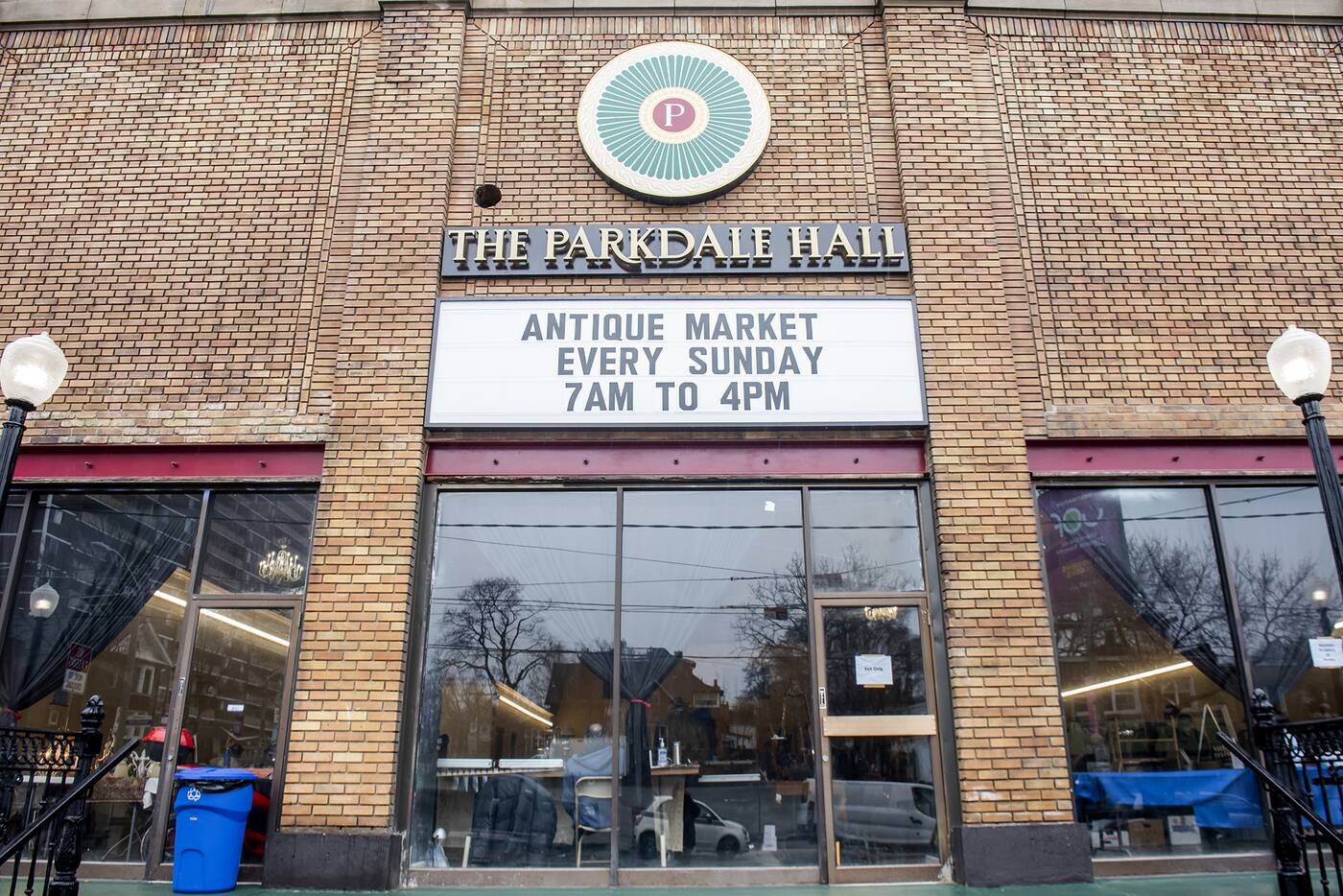 Parkdale Hall is running an antique market every Sunday from 7 a.m. to 4 p.m.

For a few brief weeks, it introduced a weekly market for antiques and other old-timey wares before shuttering again for lockdown.

Now Parkdale Hall's Sunday market is back for a second round, and this time it's tacked on a new steam punk-themed cafe and promise of even more programming for vintage heads. 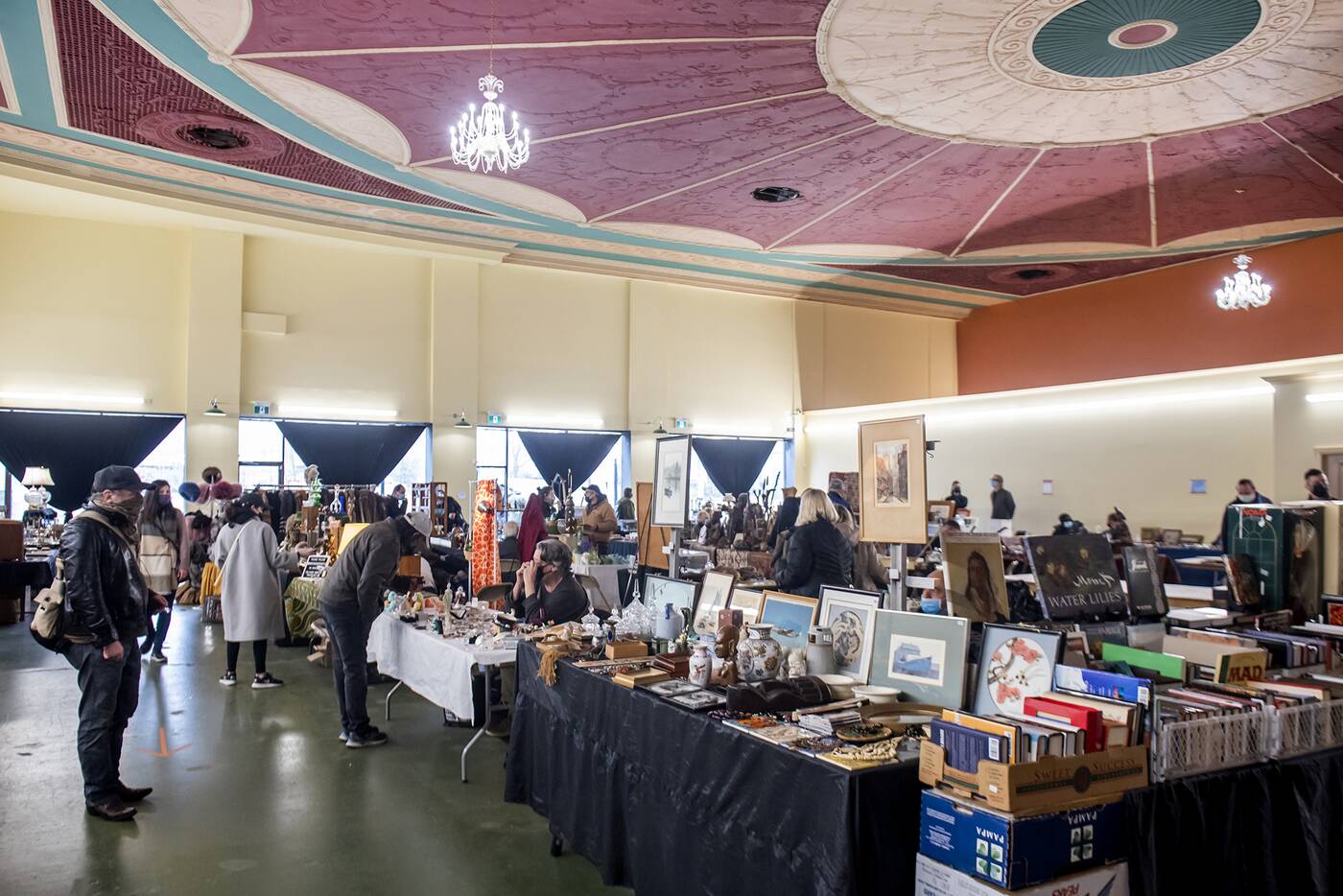 The market is an ode to Parkdale's history as an antique hub.

Alex Chan, who now operates three of the four units at Parkdale Hall, provides a pretty well thought out vision for the future of this 101-year-old building. There's a concerted effort to make anything new here feel old. 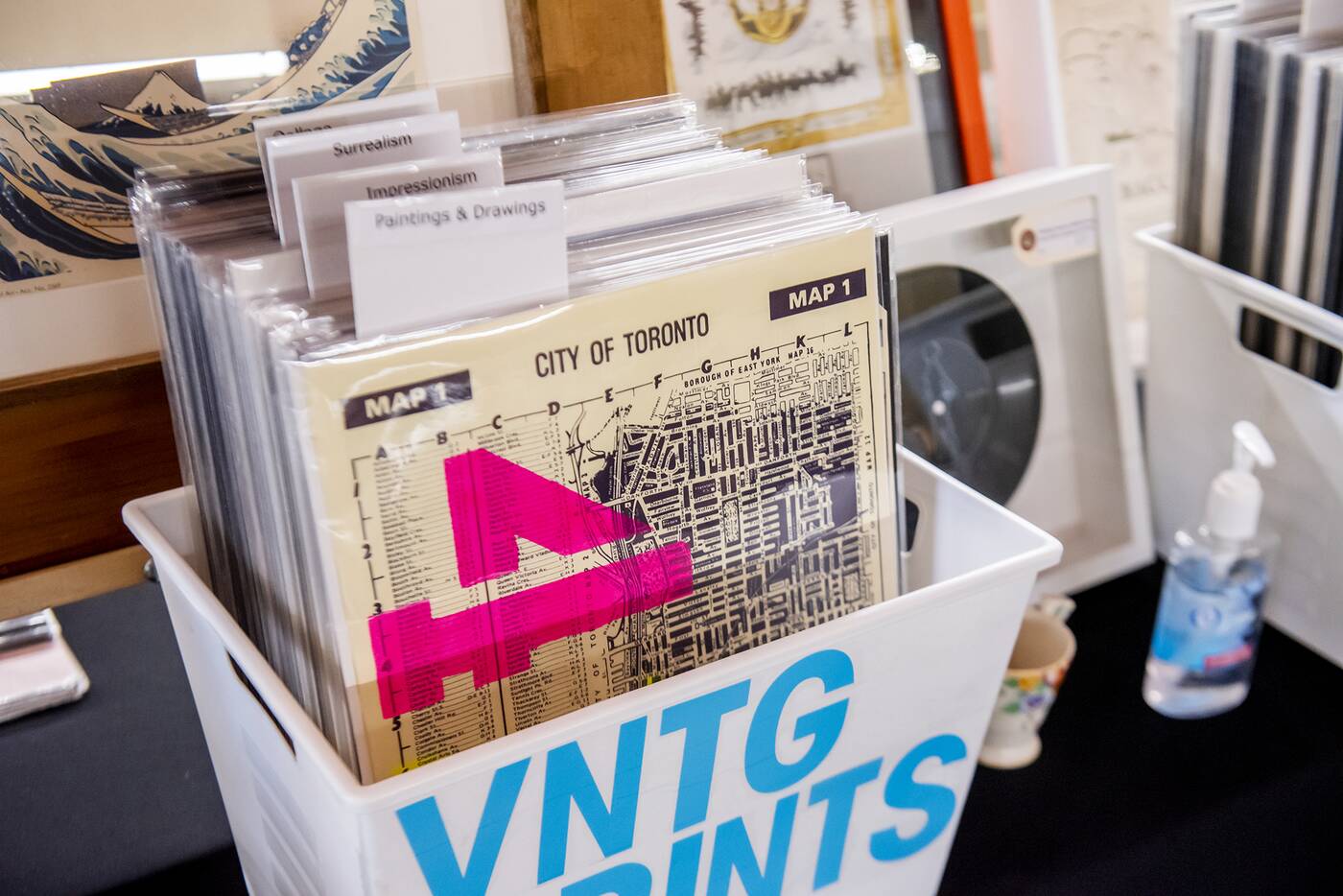 More than 35 antique vendors take over the hall weekly to sell their wares.

Parkdale Hall's inaugural event series, the Sunday Antique & Collectible Market, is an ode to Parkdale's identity as an antique hub (there had actually been an antique shop in this building once before). 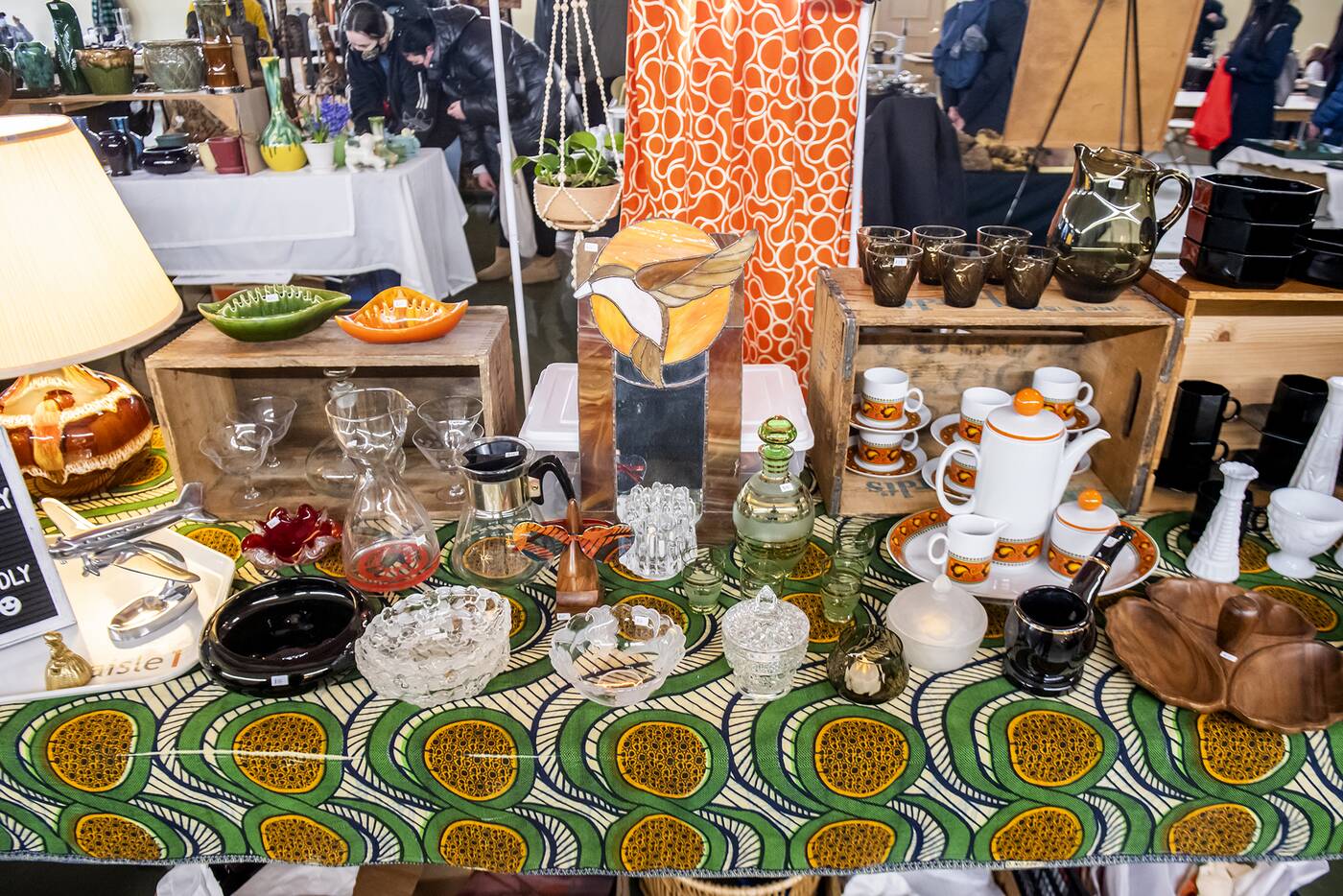 The majority of vendors are the same each week, with little turnaround for tables.

These Sundays, you can browse over 35 independent vendors like City Furniture and Top Drawer Canada from 7 a.m. to 4 p.m., with social distancing in effect and the building at 25 per cent capacity. 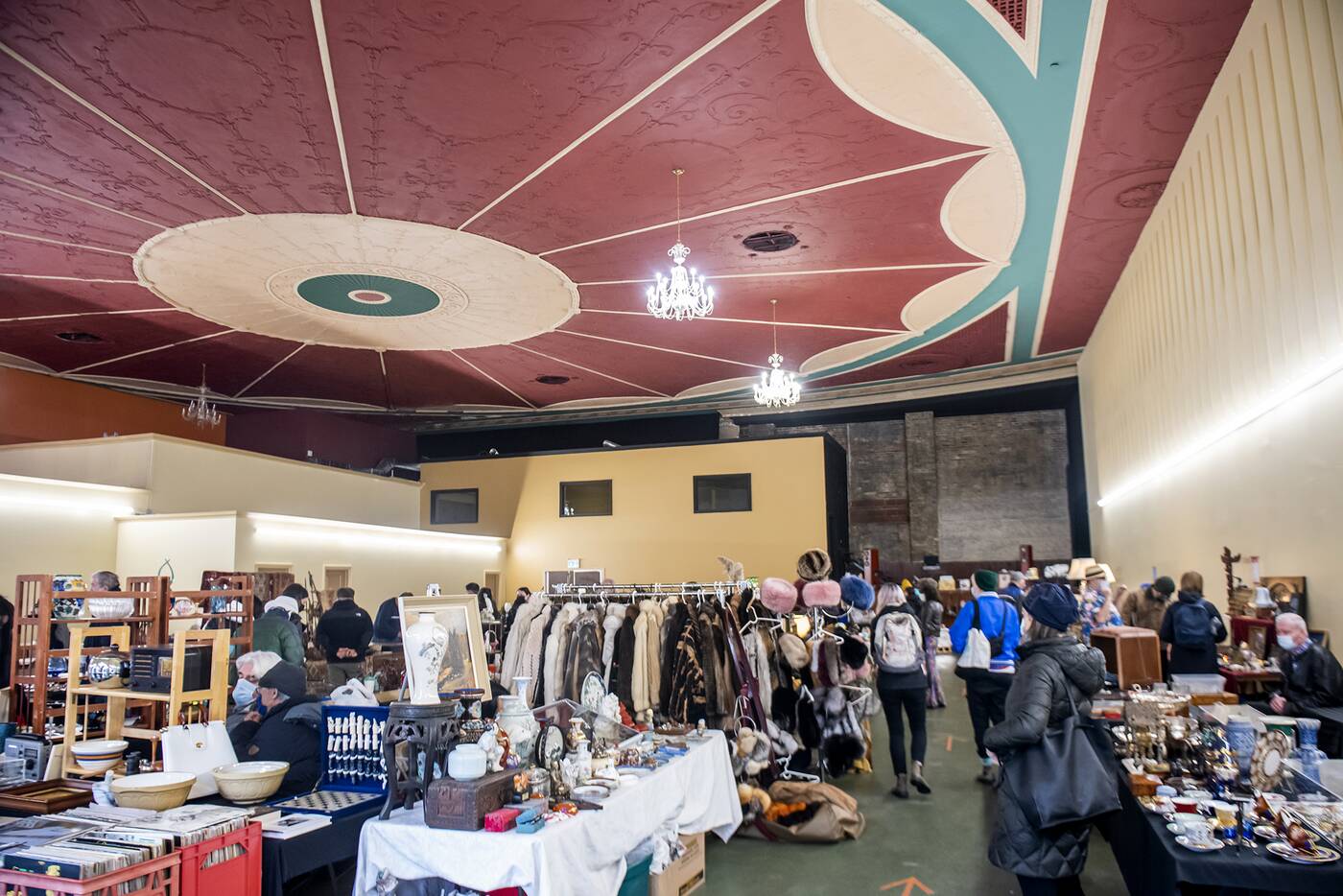 Parkdale Hall's colourful ceiling was rediscovered after being hidden beneath a drop ceiling for more than 40 years.

The hall's new logo is a simple design that uses the same colourway as the building's crown jewel: a century-old ceiling that was hidden for decades before Chan rediscovered it while rifling through a closet in the building.

After months of work, the ornate ceiling, with all its rosette detailing, has been restored and is now on full display at the hall. 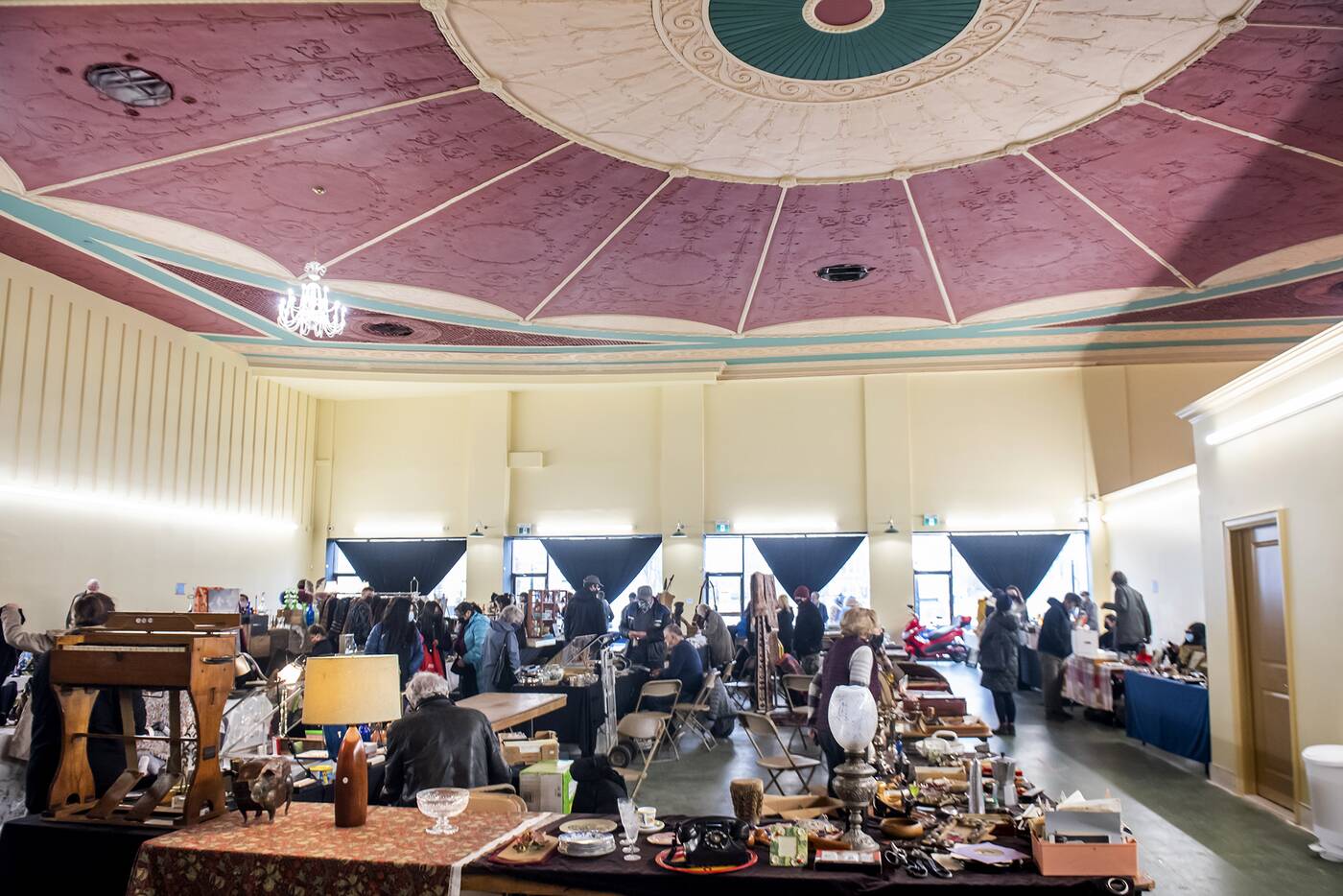 Alex Chan runs three units out of four inside the building, which is owned by a family member.

"I just wanted to highlight the community that’s already here," says Chan. "This is kind of an old, new space."

"So far the response from the community has been really strong. People have lived here for decades and never seen the ceiling before." 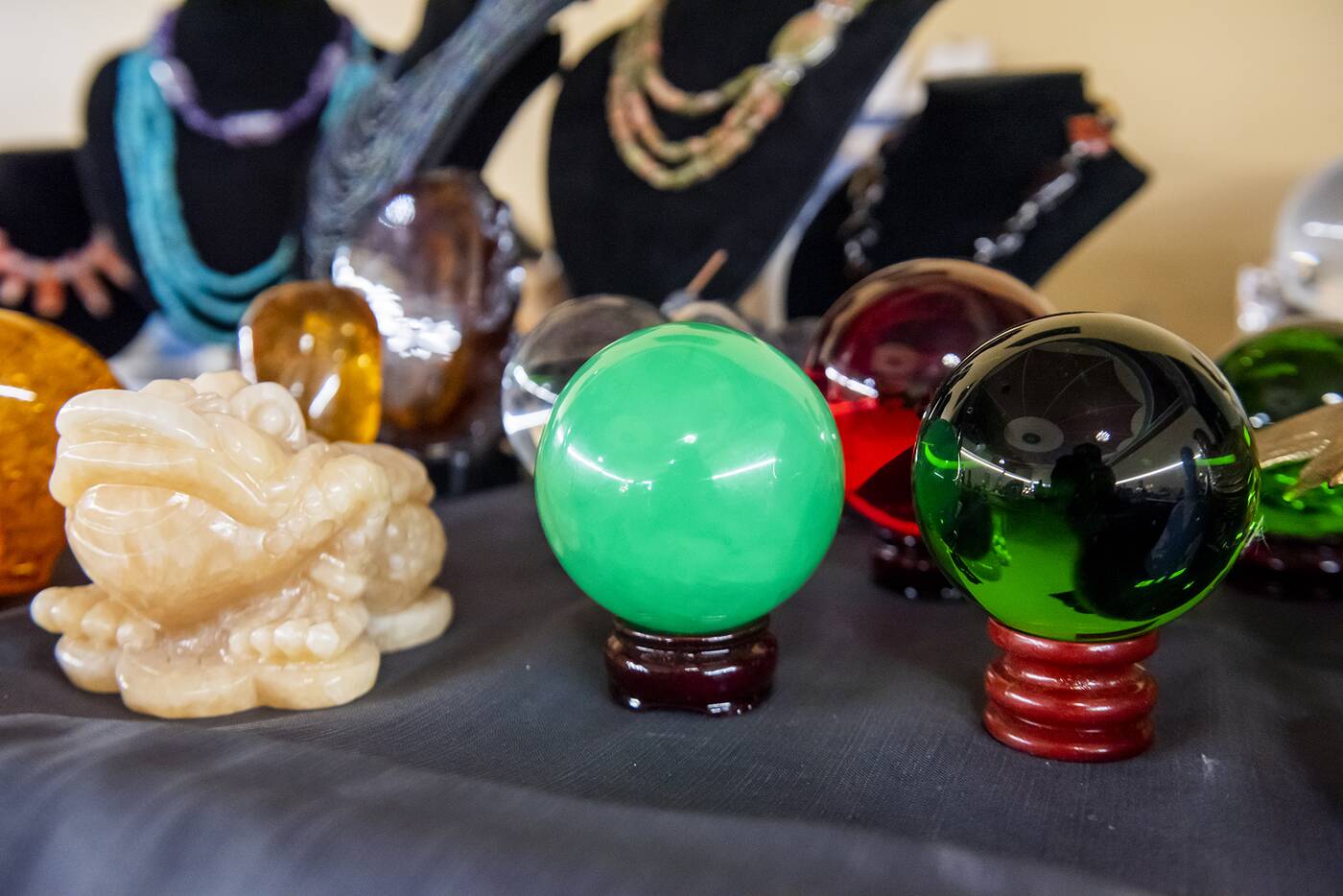 The vision behind Parkdale Hall is to pay homage to the past with new features.

A plain drop ceiling was added over the original in the 1970s sometime after the theatre was replaced by an Eaton's department store, says Chan.

The building then went on to host a beer store, followed by a few other retailers. 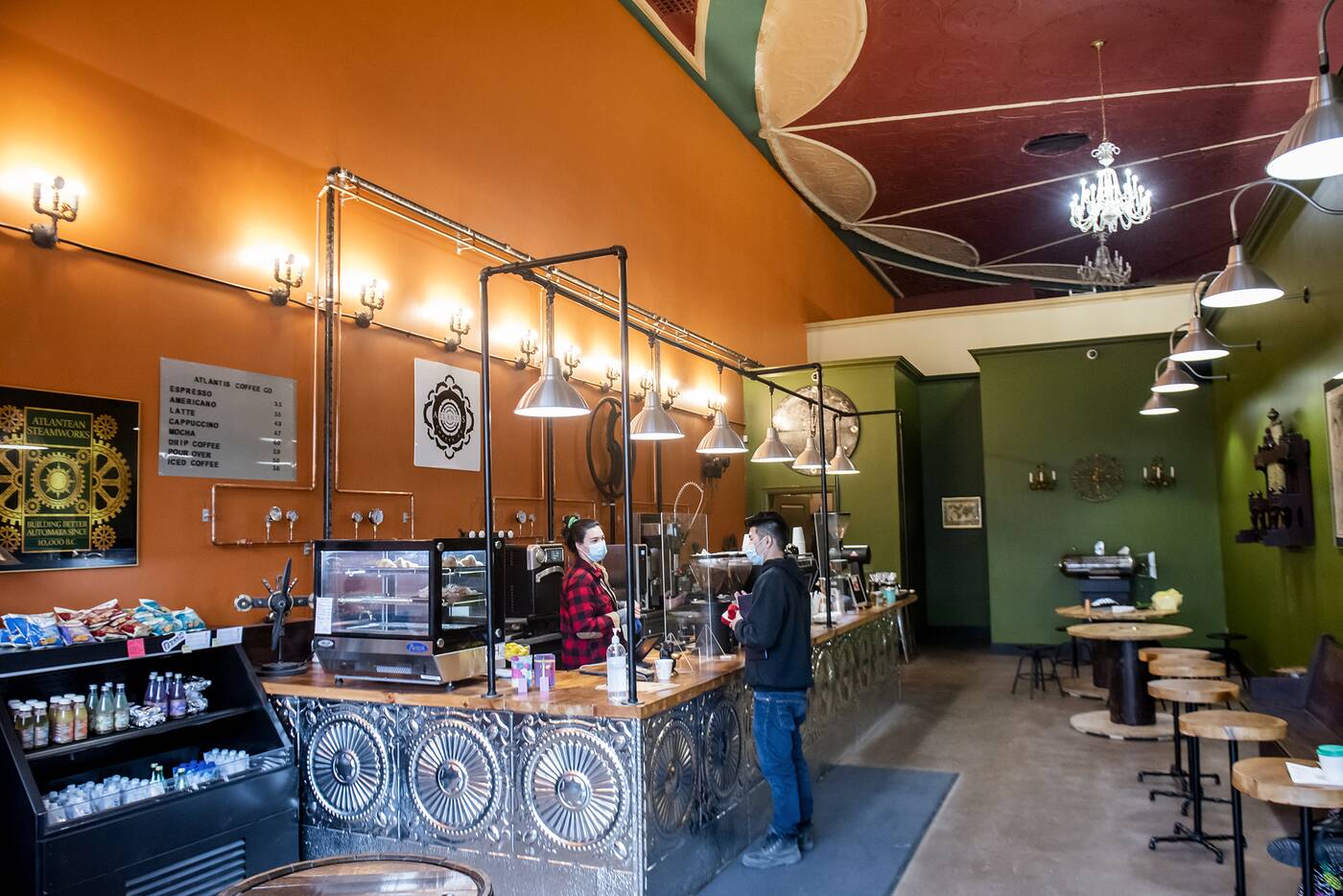 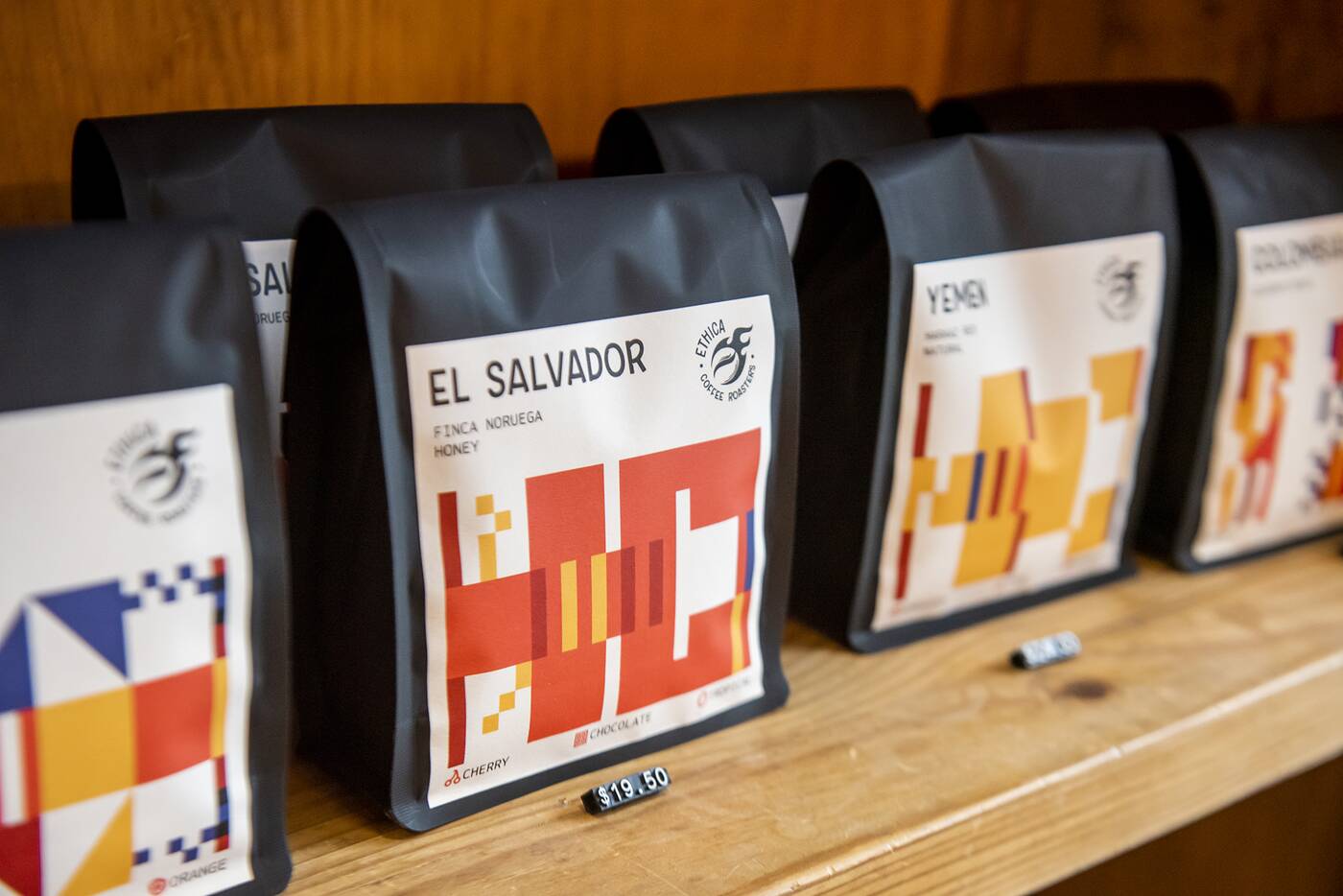 Alex Chan partnered with Ethica Coffee Roasters to come up with Atlantis' menu.

The shop takes aesthetic inspo from steampunk, the retrofuturistic sci-fi genre that gave us flying-goggle fashion and blimps with machine guns.

"Thinking about the nature of the building and the opulent design, we didn't want to bring in a hyper-modern coffee shop," says Chan. "It's taking the old and making it new. It’s a theme we wanted to keep consistent with our venue." 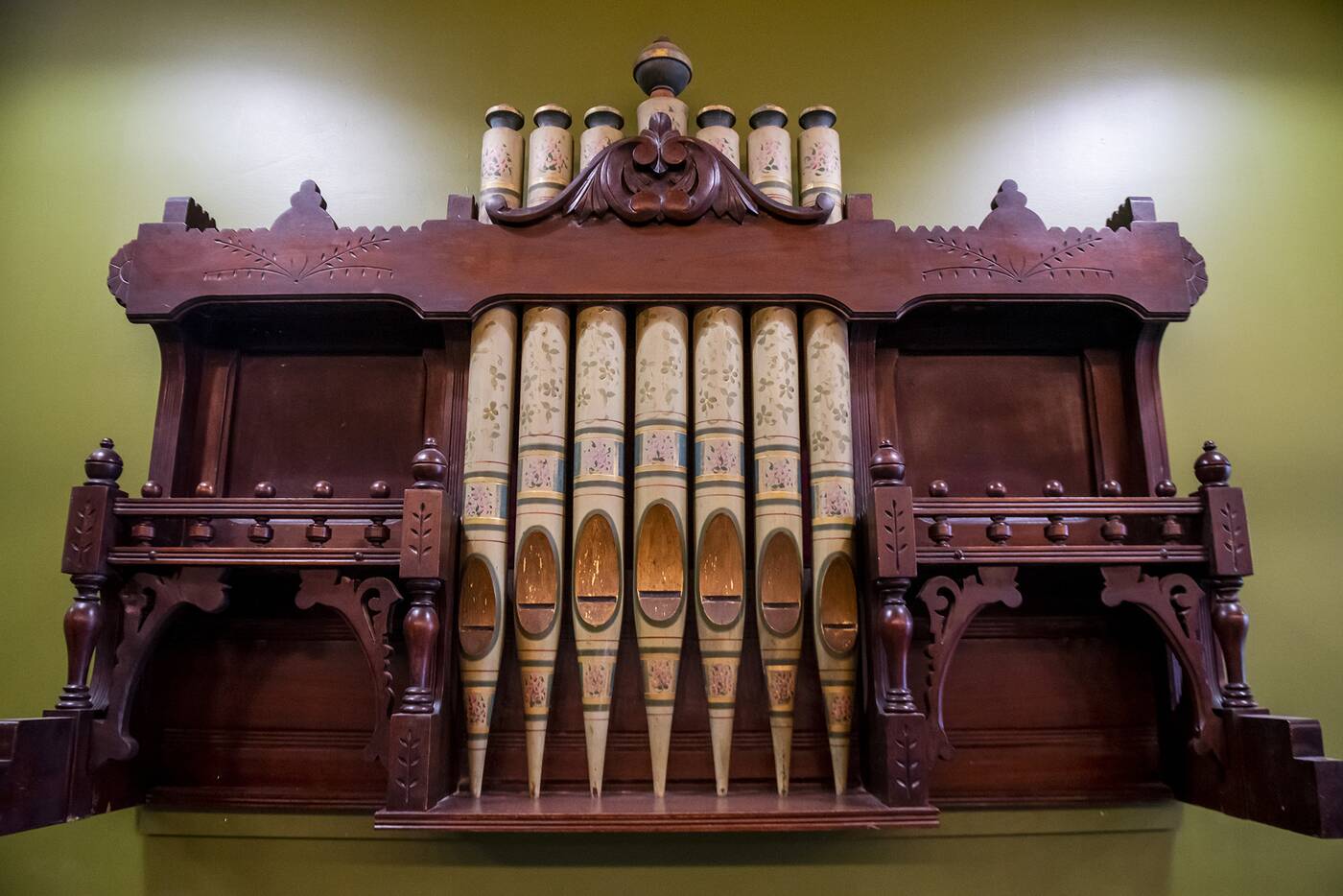 A restored organ from local antique vendor Lorraine Johnson hangs on the wall at Atlantis.

Chan partnered with Ethica Coffee Roasters, bringing the space to life with some antique pieces like a restored organ from market vendor Lorraine Johnson and an old oxygen tank-turned-submarine inspired by Jules Vernes' underwater classic, Twenty Thousand Leagues Under The Sea. 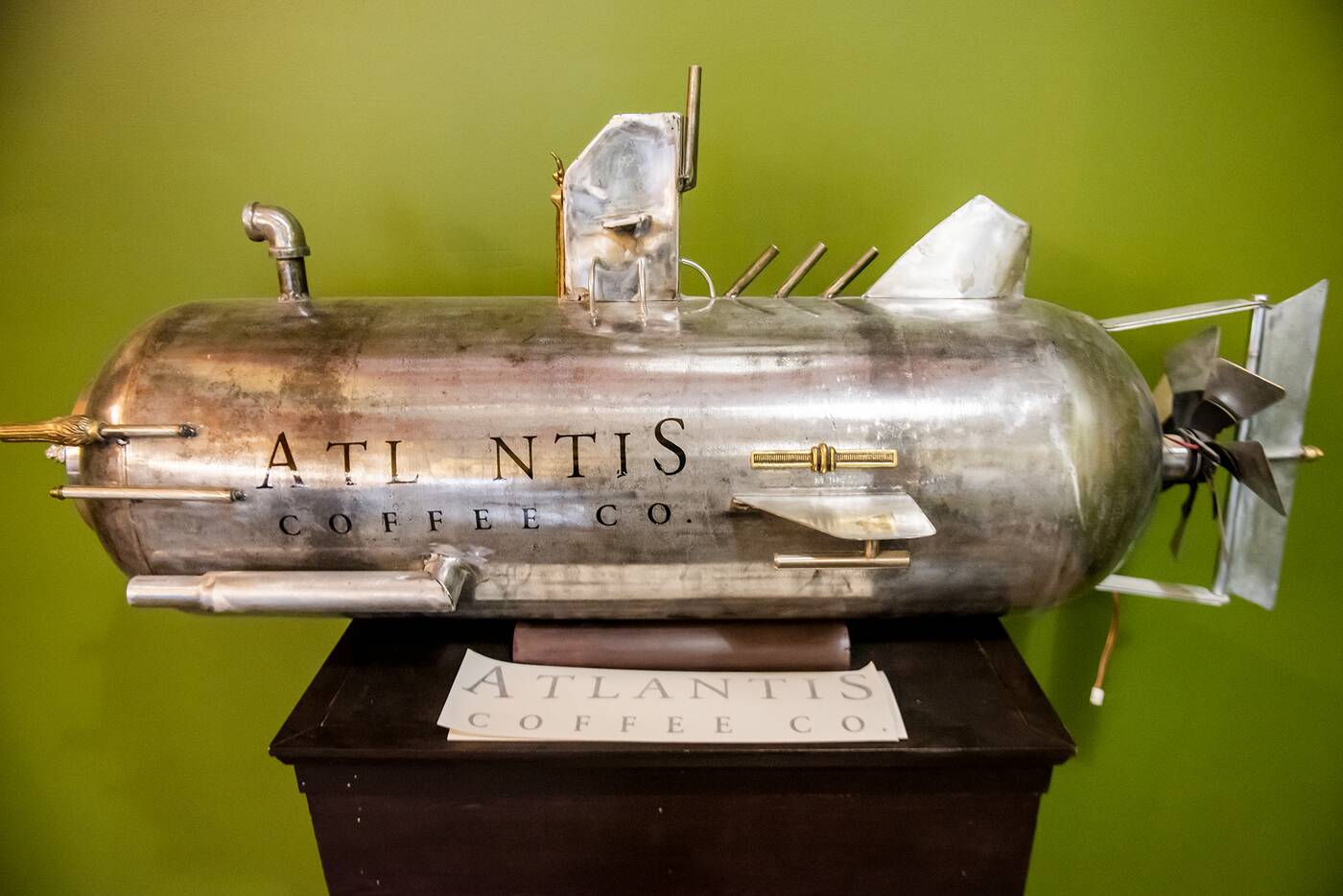 At the bar, you'll find exposed copper piping and gauges that actually move as baristas turn on taps. Breakfast sandwiches from Donna's are especially popular during the Sunay antique market. 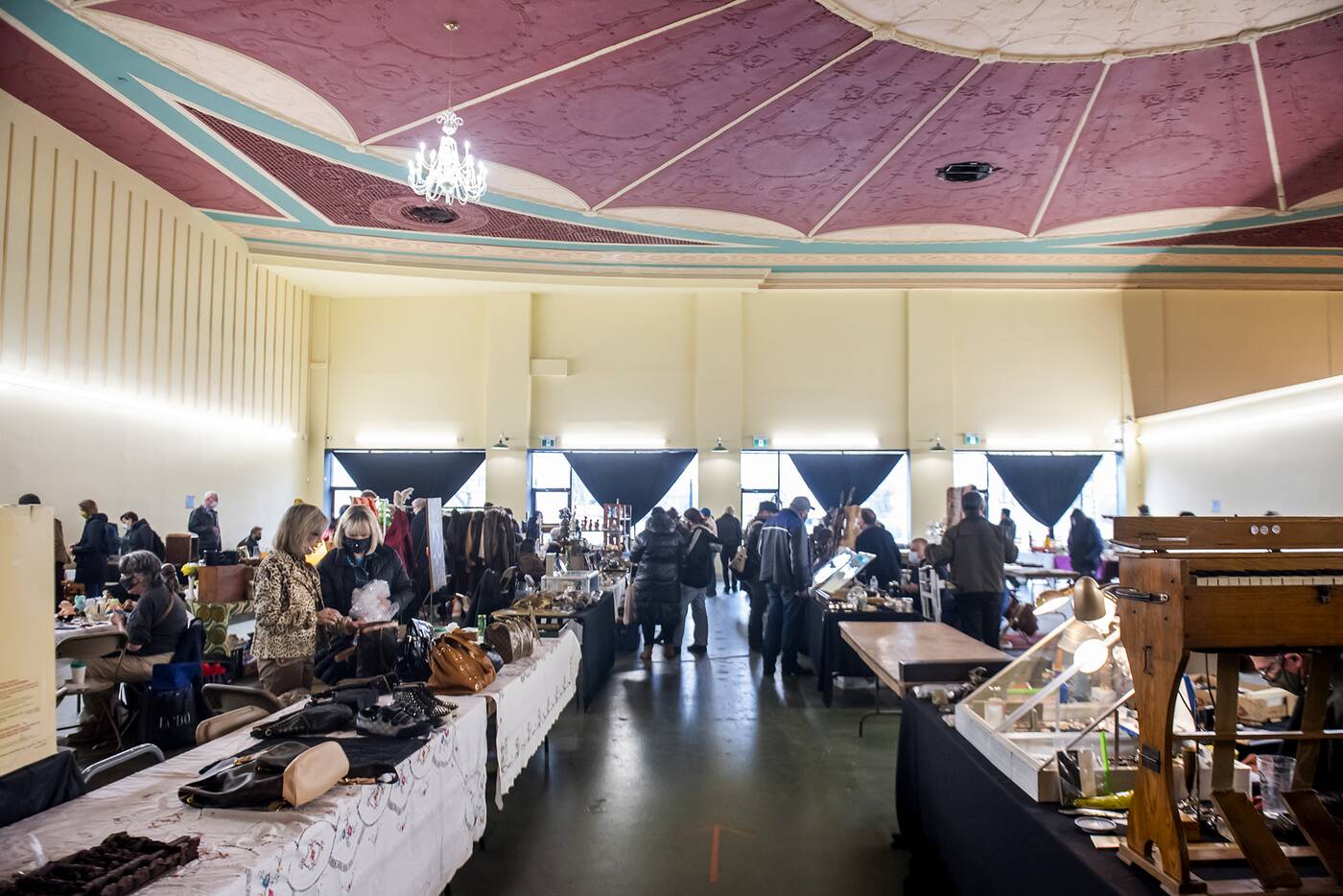 There are more recurring markets planned for the Parkdale Hall space.

Chan says he has more events in the works. There are plans for an artisan market on the first Thursday of every month, and a vintage fashion market on Saturdays, slated to launch after Easter weekend. 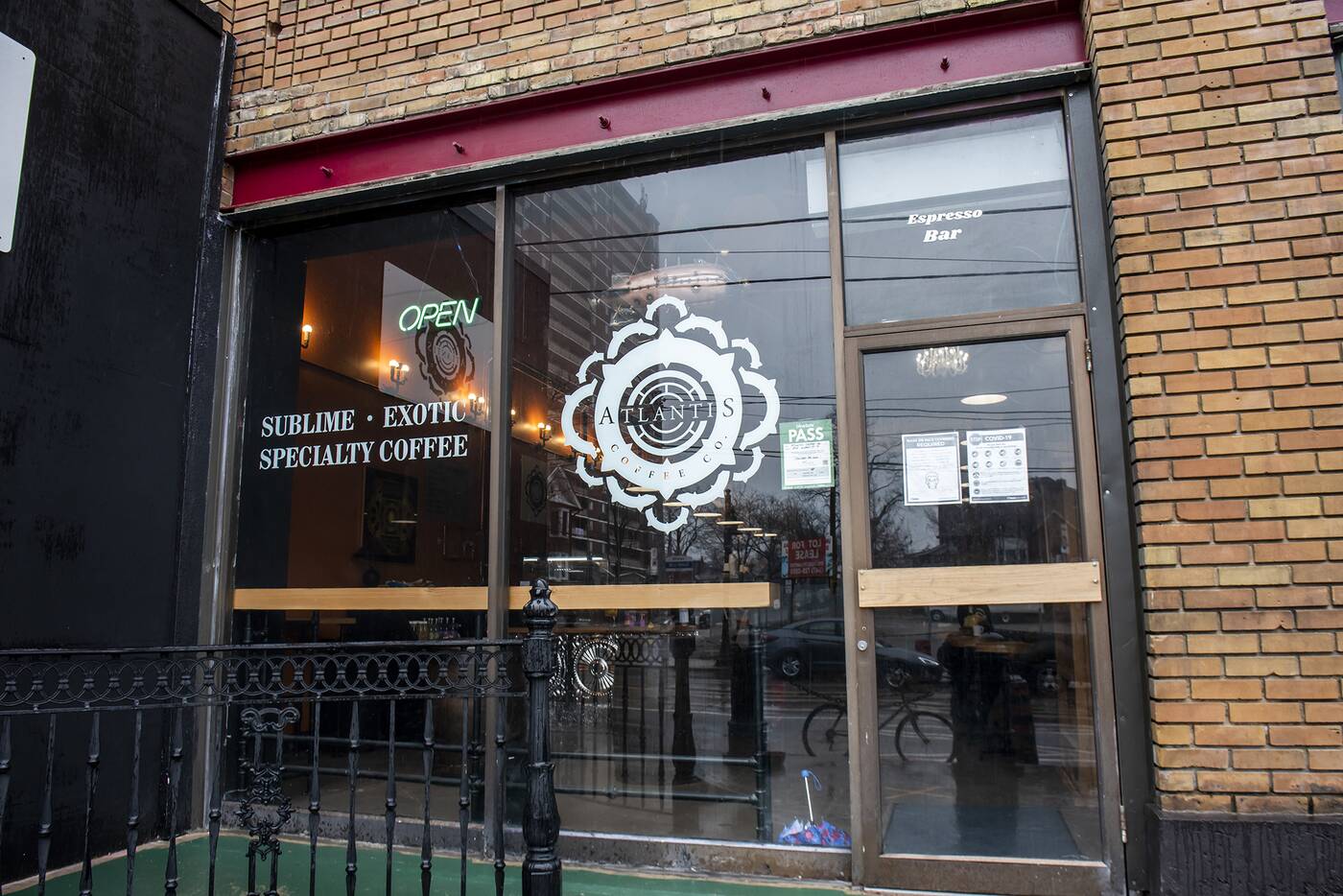 He also plans on reaching out to Parkdale's vibrant network of organizers and community groups to offer the space at "hyper-reduced rates."

"I want this to be a community space," says Chan.