Toronto's popular, yet perpetually drama-plagued Trinity Bellwoods Flea Market is suspending operations amid new accusations of bullying and discrimination against its organizer — the latest in a long line of similar complaints in recent years.

This week's allegations come from a young artist who was told by the organizer, among other horrendous things, that her Vietnamese name was too "obscure" and "unusual" for staff to spell correctly.

Though the artist does not name the organizer, Felicia Laplume has responded publicly to the accusations.

The events leading up to the market's "extended break" began years ago, according to multiple vendors who spoke to blogTO but did not want to be named for fear of repercussions, and came to a head on Sunday thanks to an emotional Instagram post.

Toronto artist Aimi Tran, who owns a small paper goods and illustration company, published a 14-minute-long video to her @inkbymi business account over the weekend in which she details a particularly "unsavoury interaction" with the market's organizer.

The interaction took place in 2019 after Tran, who goes by "Mi," applied to be a vendor at several flea markets in Toronto.

Having just launched her business in August of that year, the young artist was thrilled to be accepted as a vendor for an upcoming holiday market at the Trinity Bellwoods Flea Market.

Established in 2014 and run out of The Great Hall on Queen West, it is one of the city's larger physical outlets for local artisans.

But as marketing materials for the event started circulating in September, Tran noticed a glaring error: The name of her business had been mispelled.

"I didn't know what to do when I saw that," said Tran in her now-viral video. "I didn't want to come out as demanding, but in my gut I felt like it was wrong that they were using my photos that I took, my products that I created, to gain an audience but I didn't get anything out of it."

"I decided to message them saying that it might be a typo, but it would be great if they could correct it... they ignored her for three months until a week before the market."

Upset to see her business promoted once again as "inkbyami," as opposed to "inkbymi," Tran politely followed up with organizer Felicia Laplume requesting that it be changed.

Laplume immediately pulled inkbymi from the market, issued a refund, and accused the young business owner of being disrespectful — a claim that Tran refutes. Screenshots from her interactions with Laplume seem to support Tran's take on the situation.

"As a small business that just started four months ago, I was heartbroken," said Tran in her video, posted Sunday. "I bawled my eyes out, I had no idea what I did wrong. I felt like a failure."

"I felt like a nobody at that point, because this person just disregarded all of my hard work that I'd prepared for — cutting hundreds of cards, packaging hundreds of cards… I was so excited — my first time ever putting myself out there and she just took it away from me."

In an attempt to clear up the confusion and tell Laplume that she had meant no disrespect, Tran says she was verbally abused for seven minutes straight. Laplume denies this allegation.

"When I called this person, she lashed the f**k out at me," said Tran, who refrained from mentioning the market organizer by name. "I have every right to be as upset as I was, and am to this day."

But it wasn't hurt feelings or lost business that prompted Tran to speak out publicly against the Trinity Bellwoods Flea Market this week: It was, as she put it, "what I experienced as a female, Asian small business owner."

Emboldened by ongoing conversations surrounding anti-Asian racism in Toronto and initiatives to combat discrimination, Tran decided to tell the story of her own painful experience with the Trinity Bellwoods Flea Market.

While on the phone with Laplume, Tran says Laplume screamed at her to the point where Tran cried. She says that Laplume blamed her for the mispelling of her own name, contending that it is "obscure" and "unusual" and that her staff shouldn't have had to accomodate it in the first place.

"It hurt to hear something like that over the phone from some stranger I've never met before," said Tran, who explained to Laplume that "Mi" is her Vietnamese name, and that she simply wanted the business name to be spelled properly so that customers could access her wares.

Laplume responded by blocking Tran from the market's social media accounts and telling the vendor that her chances of ever being booked for another market or event in the city had been slashed on account of her actions.

Tran wrote in the description of her video wrote that her intention is not to slander the market or its organizer, but "to shed light on a systemic issue regarding a person held in high authortity whose actions have discriminated against myself on the basis of my name."

She said that Laplume made her "feel very ashamed of having a Vietnamese name" during their conversation — "something no one, whether they be a student or local artist or anyone at all, should ever feel, and least of all in a political climate like this one when anti-Asian sentiments already run rampant."

Tran was most disturbed, however, by the threats Laplume had lobbed against her livelihood.

"After the phone call, I was paralyzed. I was paralyzed in fear," said Tran through tears in her video. "I stayed up multiple nights wondering what she could be saying to other oprganizers, or what people I might be trying to work with were talking about... or what could this mean for my new business...."

She even considered closing her shop on account of the incident — but speaking to other vendors who've worked with Laplume (who, again, Tran herself did not name in the post) changed her mind.

"She has a reputation, she knows that what she does is wrong. If you do your research, you'll probably find it as well," said Tran. "She just gets away with it because of how popular her market is."

Because of Tran's bravery and willingness to go on the record, this may no longer be the case.

Several of her markets have long operated out of the Great Hall in West Queen West, but the venue no longer wants to host them as Tran's video inspires more and more vendors to come forward with horror stories.

"Behaviour like this is inexcusable and has no place in our venue or community," said The Great Hall's Mark Foster to The Toronto Star this week, confirming that the venue would be cutting ties with Laplume and the Trinity Bellwoods Flea Market.

As of Friday, the market's website states that Trinity Bellwoods Flea Market is "on break until summer 2021." This, just a few weeks after organizers had put out a call for vendors to sell their wares beginning April 11.

The Facebook page for the market is currently unavailable, but Laplume has spoken out regarding the allegations on the market's Instagram page.

"It is with deep regret we recently learned of the false allegations of descrimination made by Aimi Tran. We confirm, for the record. That Ms Tran's allegations are patently false and have no basis in fact," reads a post published Wednesday.

"The Trinity Bellwoods Flea is a community market that is seriously committed to diversity and inclusion. If required, we are more than prepared to defend our organization against the baseless allegations being made by Ms Tran." 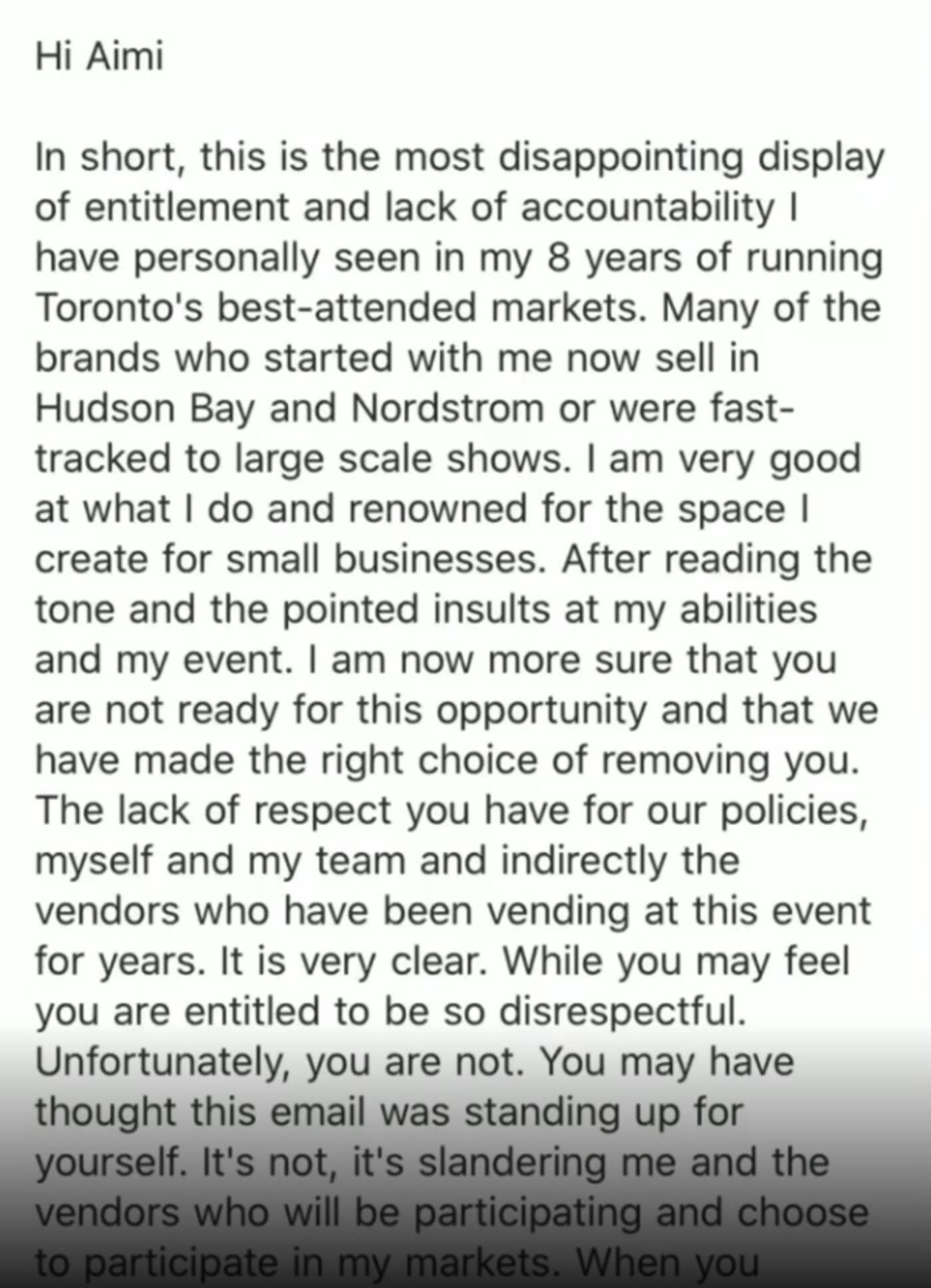 Tran shared screenshots of several emails and Facebook messages like this one in which Laplume berated her for requesting that the name of her business be spelled correctly. Image via inkybymi.

In a second post published Thursday with an image reading "it's time for a break," Laplume wrote in the caption managing the markets for so long had taken a toll on her mental health and "in some causes caused me to react in a manner that does not yield a positive outcome for myself or in some cases others."

"I have for some time been overwhelmed and often perpetually stressed and anxiety ridden. To a point that my reactions even if not intentional, are not positive," reads the post's caption.

"So now is the time to work on that and step back. I am going to be working on learning to manage my ASD - Acute Stress Disorder."

While noting that operations have been paused, the Trinity Bellwoods Flea Market's website maintains that it is "an inclusive and safe space" and that "we welcome vendors, artisans, and small businesses of all races, ethnicity, religion, sexual orientation, and gender identities."