Toronto barbershop Barking Iron is about to lose its license, but owner Julian Herrche says he doesn't care.

The business owner, who has been running the Parkdale barbershop since 2017, received a notice this week saying that he needs to pay his annual license renewal fee by April 17 in order to continue operating his business.

The renewal fee, which Herrche has been paying yearly since he started Barking Iron, comes up to $247.61 for his 2021 license.

Herrche says he has no intention of paying it.

"I just think it's really insulting that they had the audacity to send this to me," said Herrche. "Not even cutting it in half. They sent me the full amount. I'm not paying a dollar." 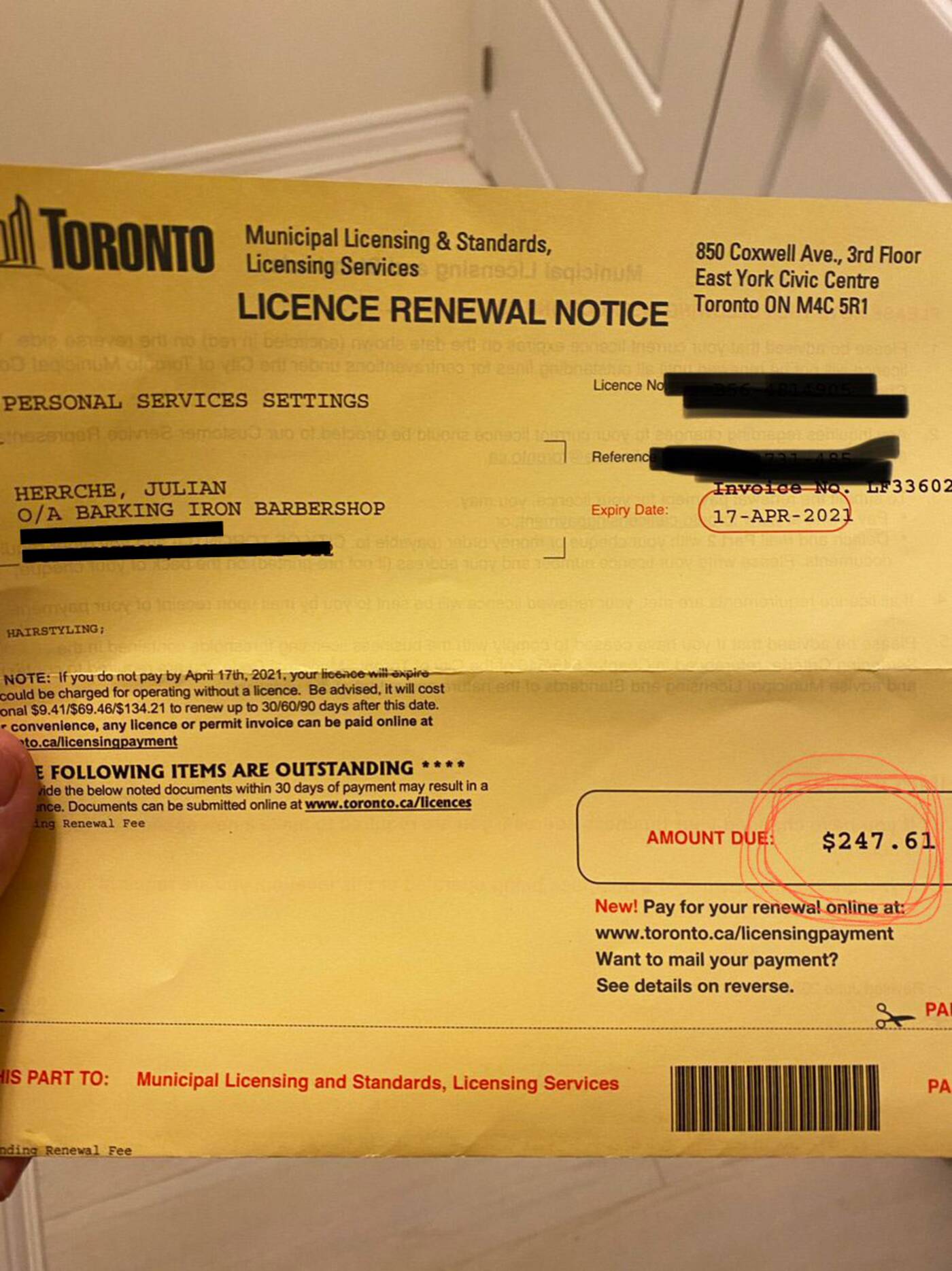 Herrche's business, like all other barbershops and hair salons in Toronto, has been temporarily closed since November.

Prior to that, personal services were forced to close for another several months during Toronto's first lockdown, reopening in June with limited capacity.

For Barking Iron, that equates to nearly seven months of closure in the last year.

Amidst calls from barbershops across Toronto to reopen after months of closure, Herrche says Toronto's refusal to suspend the fee shows a lack of understanding from the city.

Herrche is keeping his Toronto barbershop afloat thanks to a second Barking Iron location in Hamilton, which is operating by appointment only and requires its own license renewal fee.

He's also enrolled in the city's relief program, which covers 65 per cent of his rent on Queen St. West.

But on top of personal expenses like groceries and car payments, Barking Iron is "kind of drowning right now."

"I don't think we should be paying anything for this year. At all. We didn't choose to close the business." 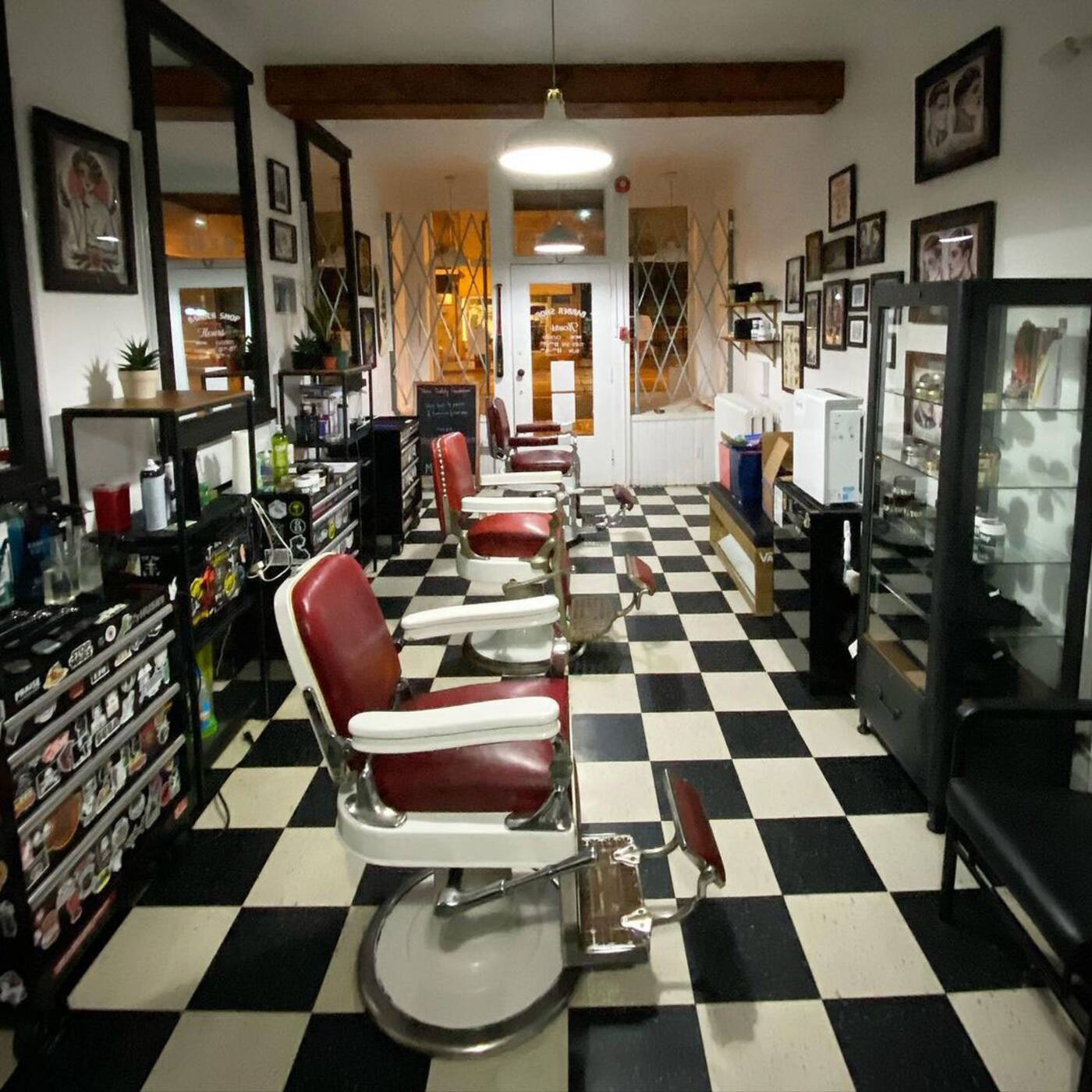 Barking Iron's location in Parkdale has been closed since November. Photo via Barking Iron.

As of July 2020, the city updated its site to allow businesses to apply for and renew business licenses online.

Meanwhile, existing business owners are still being asked to participate in an annual licensing renewal while facing pandemic-related circumstances that are far from ordinary.

According to a City of Toronto spokesperson, the city is looking at a new license deferral program for businesses based on "COVID-19 related financial hardship and an inability to pay."

But that application process won't be explored until April 26, at the earliest.

For now, the city says it's waiving the usual late fees.

"Currently licensees are given an additional 90 days past their renewal date before the licence is cancelled," said the city's spokesperson to blogTO.

"We do know that some licence-holders have opted not to renew their licence due to the provincial closures, and instead, apply for a new licence online should they restart their business."

Herrche says he intends on writing the city a letter explaining why he doesn't plan on paying the fee. If he loses his license, reapplying will take time, which will be of the essence of when barbershops are allowed to open in Toronto again.

"They can cancel my business, I'm just taking a stand in my own way," said Herrche.

"They're okay to stop our lives and income but they will still make sure that the money that they need is still coming into them. How can they stop one thing and not the other?"