The interiors are bare. The door, scraped clean of all discernable branding. The golden owl that long beckoned people into the small, stark retail unit is gone, and as for the OVO team? They're not talking.

It would appear as though Drake's first-ever official clothing store has disappeared from its longtime home on Dundas Street West in Toronto without any sort of warning or even a confirmation of closure.

Despite multiple requests for comment, October's Very Own brass have yet to address any questions about what's up with their original (and once widely-hyped) flagship location at 899 Dundas St. W.

What we can say for certain is that the retail unit, first occupied in 2014 by an OVO pop-up shop that eventually turned permanent, has been vacated in full. 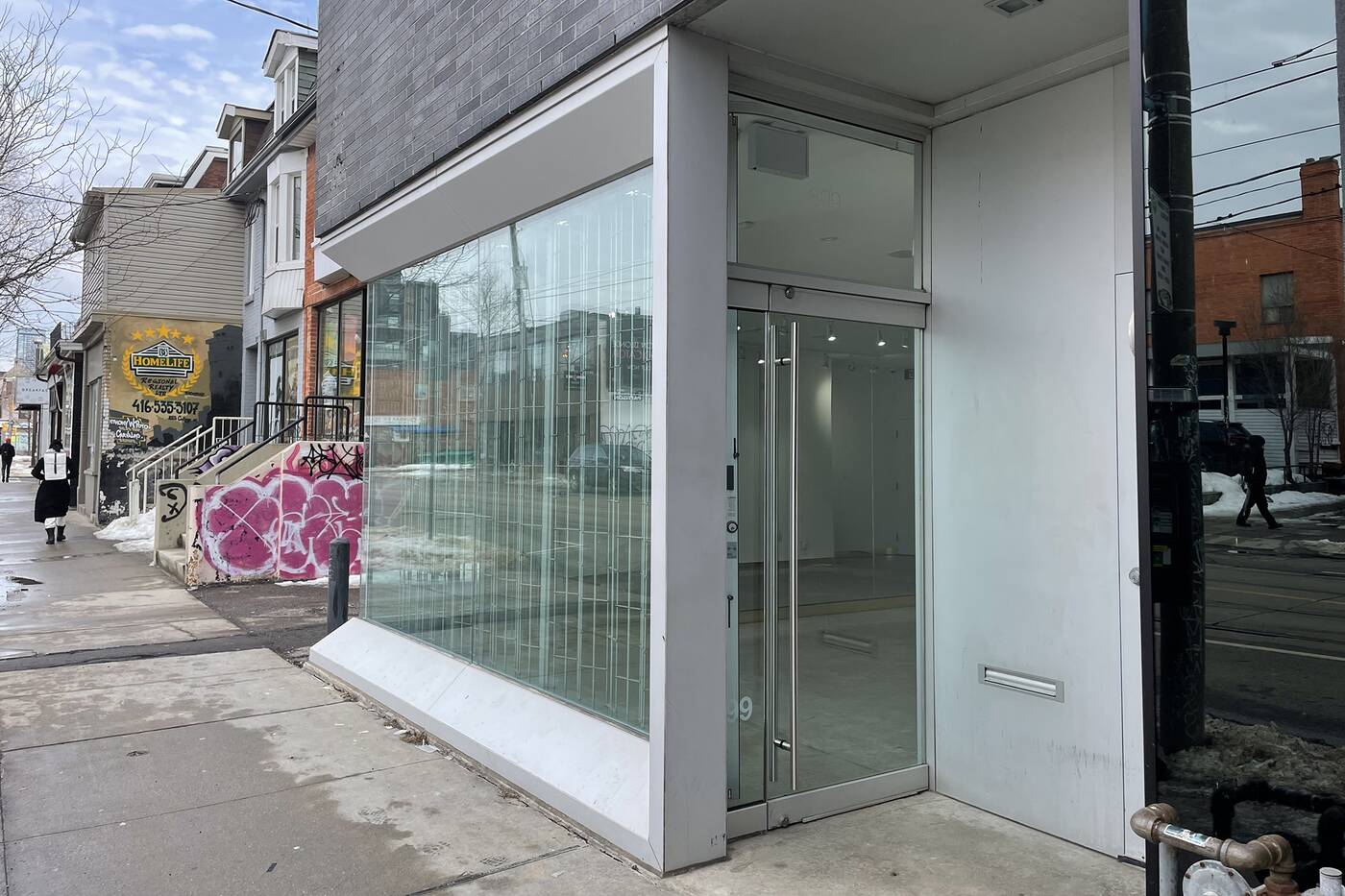 The OVO Toronto flagship opened on Dundas Street West in 2014 appears to be vacant as of February 24, 2021. Photo by Lauren O'Neil.

Fans first started buzzing about the location's potential closure earlier this month when they noticed that the place had been emptied out. 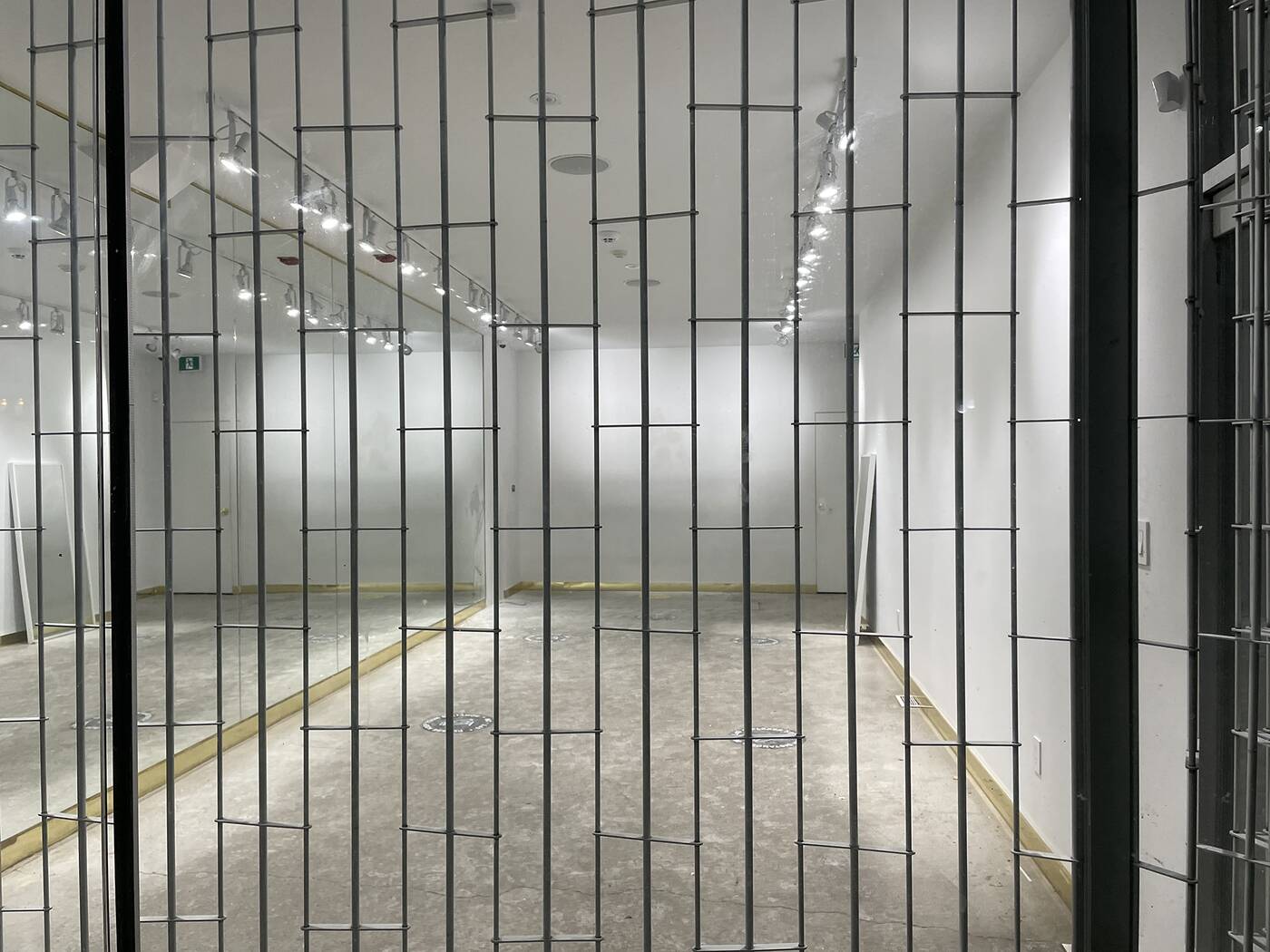 All racks, logos, store fixutres and logos had been removed from the store at 899 Dundas West by February 8. Photo by Lauren O'Neil.

While closed under provincial lockdown orders for much of the pandemic, the OVO flagship on Dundas had been displaying racks of clothing, easily visible from the window, until early 2020.

The clothing came down in January, followed by the racks that held the clothing, as well as the marbelesque floor, sales counter and glowing interior logo.

As of early February, the exterior owl signage was still in place, but has since been removed, leaving only some holes in the black brick wall above the store's front windows behind. 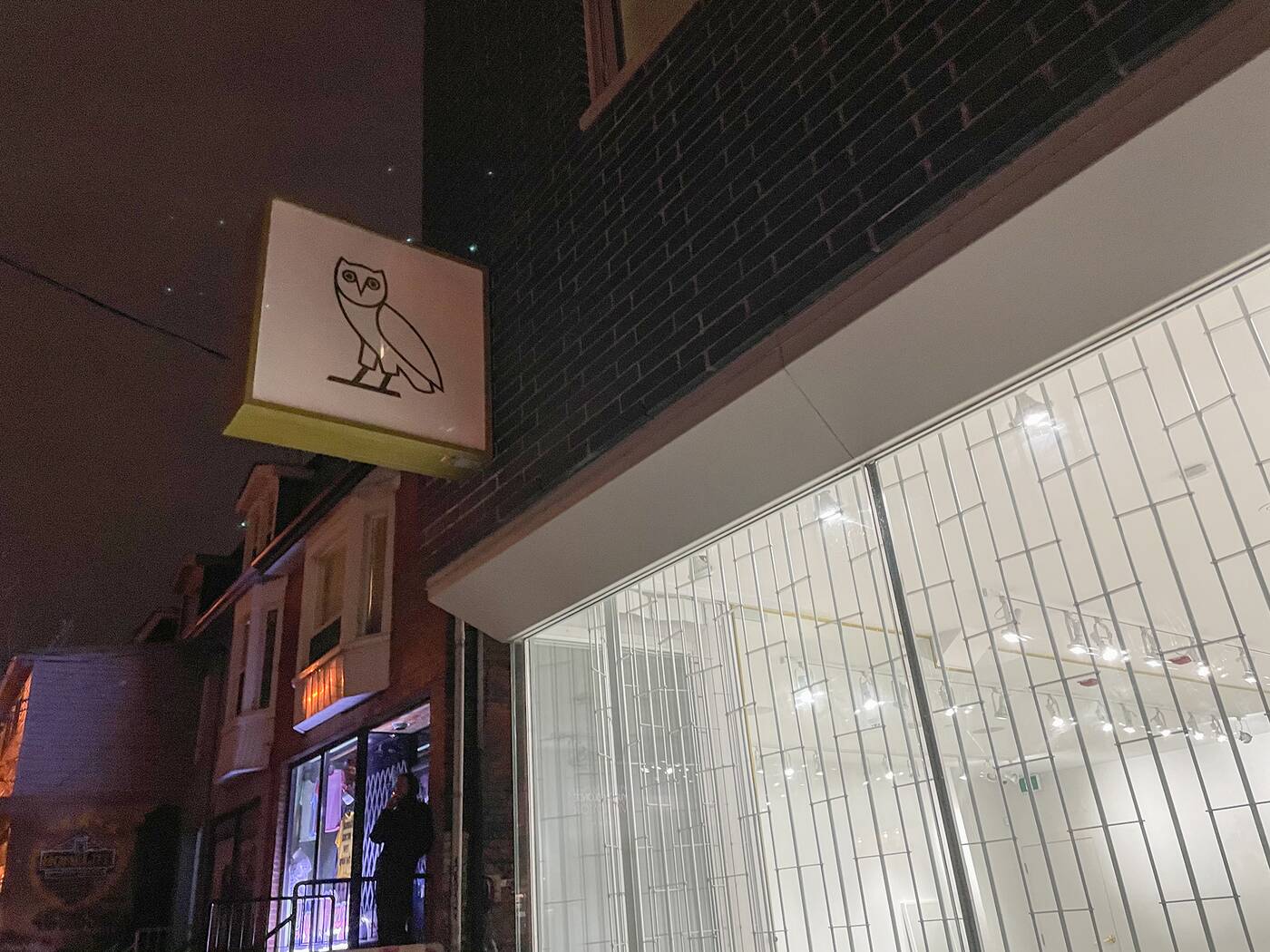 The iconic OVO owl was still displayed above the store as of February 8, but was taken down the next week. Photo by Lauren O'Neil.

While possible that the team behind Drake's first fashion baby is merely "renovating," it seems unlikely given that the the store is no longer listed as a retail location on OVO's website.

An older page for the 899 Dundas Store simply reads "temporarily closed due to COVID-19." 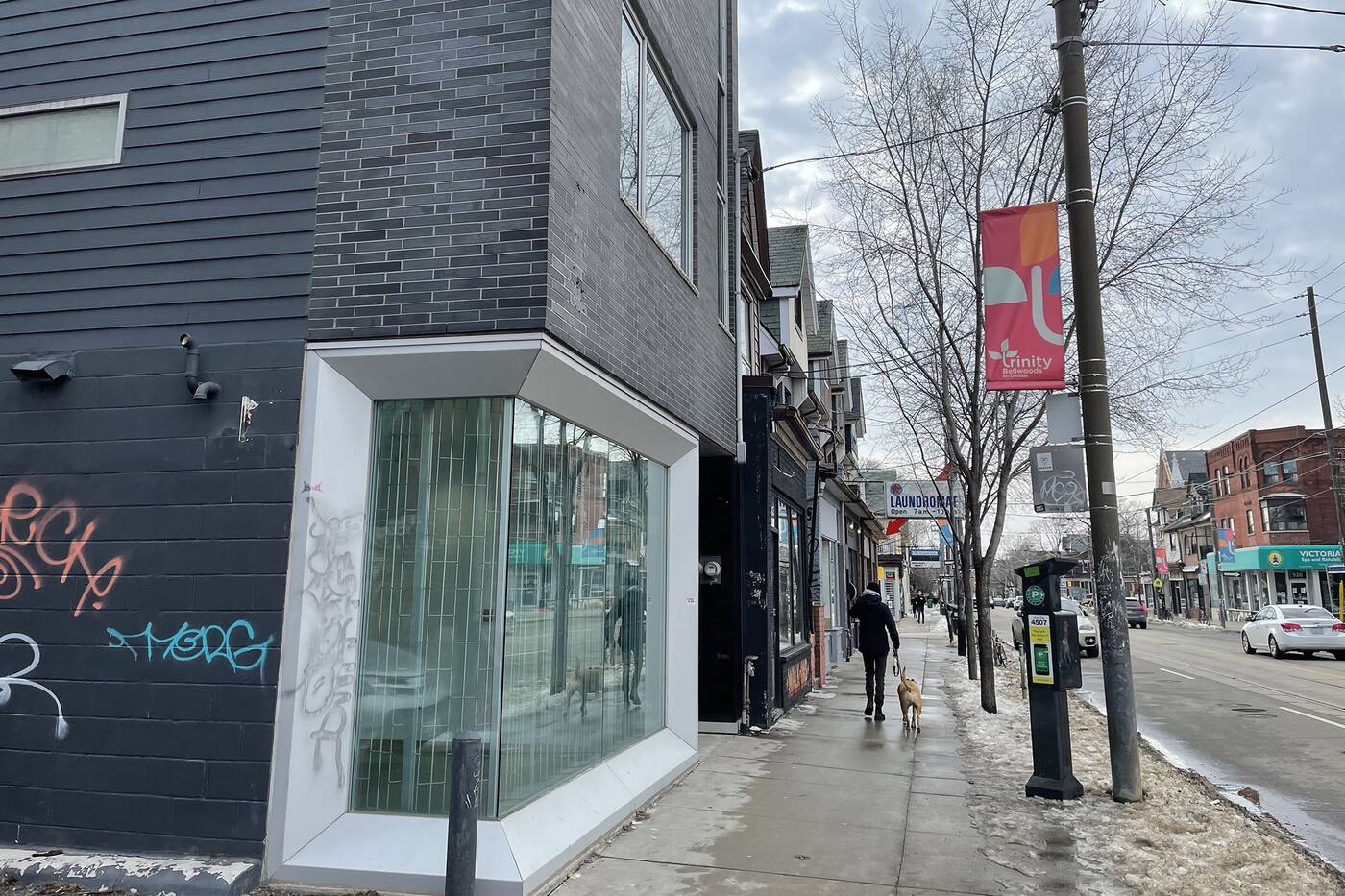 No more owl logo, signs, hours or literally anything displayed to indicate that the unit is a retail store as of February 24. Photo by Lauren O'Neil.

But there's more to the story: A 2018 real estate listing for the entire building states that a "prominent international retailer" on the ground floor had extended their lease only until February of 2021.

The building's current owner could not be reached for comment, but an agent who formerly listed the property told blogTO it was sold more than a year ago, and that the buyer (whom he did not represent) had assumed OVO as a tenant.

Without another business moving in, a public commerical listing, or confirmation from Drake's team, it's hard to say for certain that the original OVO flagship is gone — but that's certainly what it looks like right now. 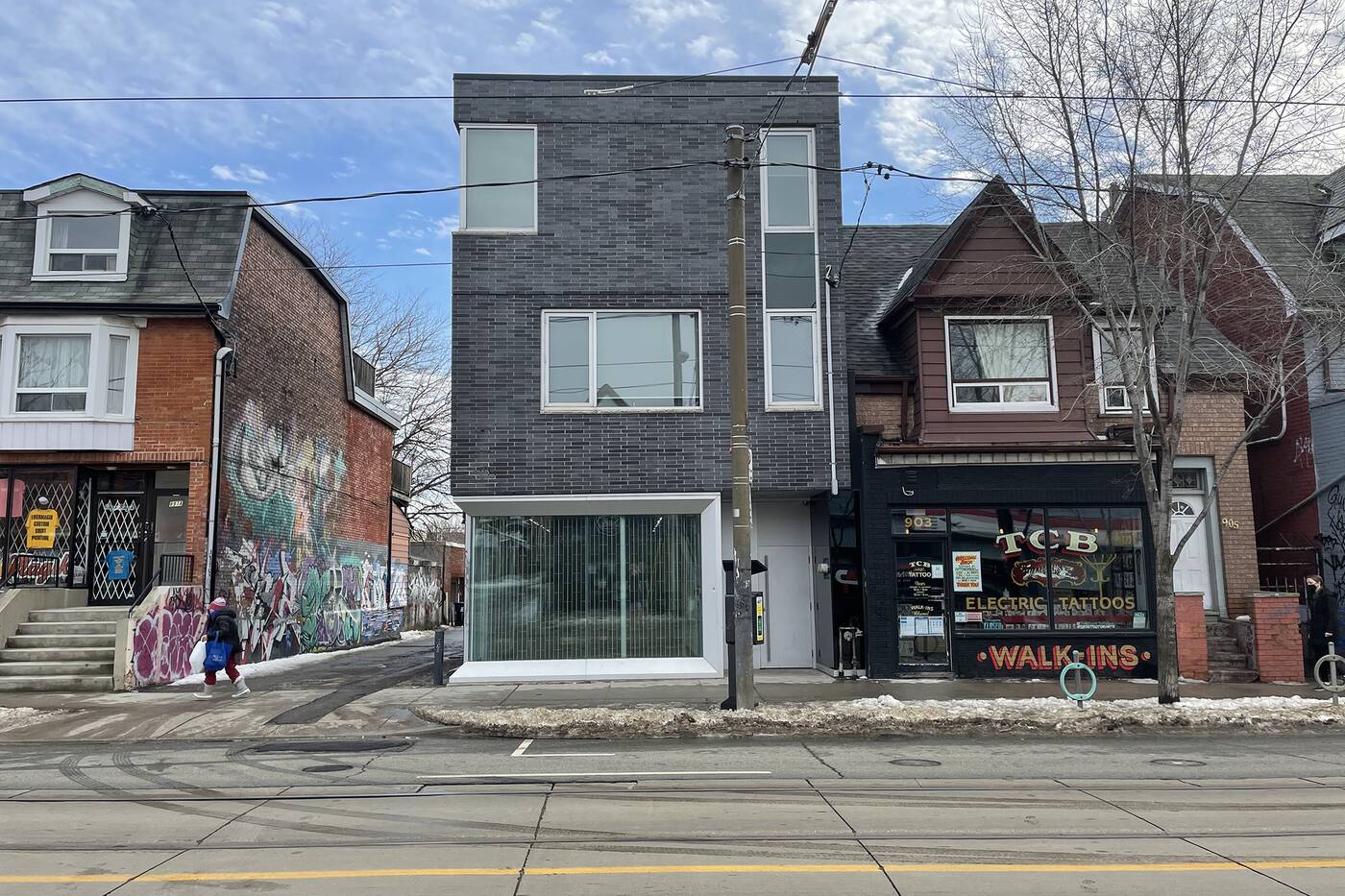 The OVO Flagship at 899 Dundas Street West was the first official brick-and-mortar outlet for the brand, which has since exploded in popularity. Photo by Lauren O'Neil.

That's not to say that the brand itself isn't doing incredibly well: OVO continues to open up new stores regularly, most recently at The Grove in Los Angeles and Ottawa's Rideau Centre.

Drake's OVO line is absolutely massive, in fact, with most drops selling out online within hours of going live.

Toronto fans who love the in-person experience of browing Drizzy-designed wares need not fret over the closure of the Dundas West Store, however, even if it's permanent: OVO currently has three much larger stores within the GTA, all of them within major shopping malls.