A person spotted around Toronto wearing black with a beak-shaped mask, pocket watch and hat has some very good reasons for wearing the odd outfit.

A person dressed as a plague doctor drew the attention of the Weird Toronto Facebook group recently. A few photos showed the person walking in the Dufferin and Davenport area and another in Roncesvalles. 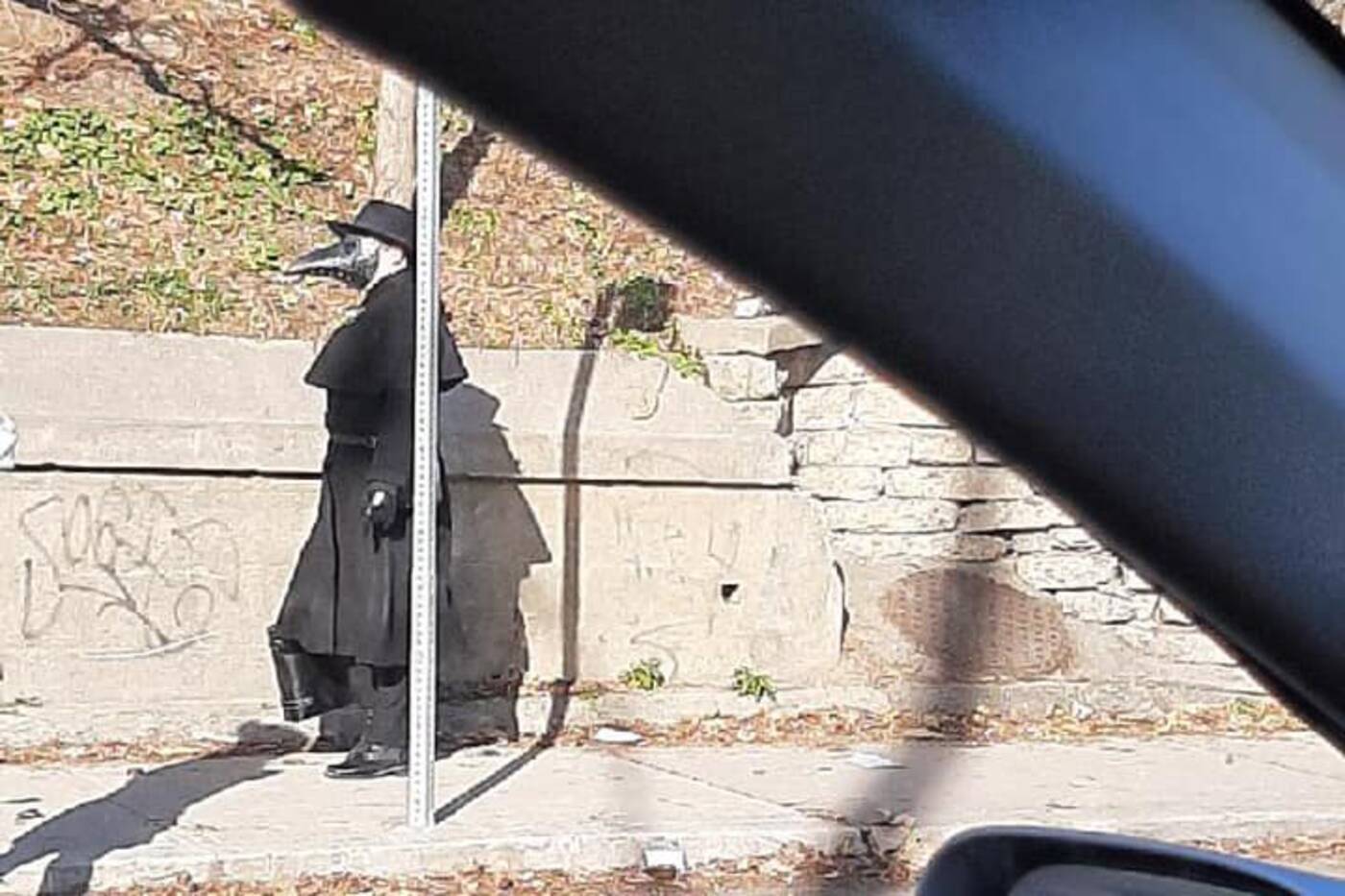 A person wearing the plague doctor outfit was spotted in the Dufferin and Davenport area. Photo by Kyle Hickey

While most people assumed the person was a man, Toronto resident Heather M. Wood told blogTO she is the one in the photos.

Wood said she got the mask in October and only got the entire outfit together recently.

"The outfit is actually more elaborate than the Facebook image would lead you to believe," Wood said. "It's made up of many different pieces that I've bought from many different places."

There is the black three-piece suit, black leather gloves, a pocket watch, and a raven-skull pendant worn over the tie. Over the suit, she wears the long wool coat and capelet with additional raven-skull collar-clip to help hold the capelet closed.

She has a black leather hip bag and, of course, the mask and hat.

She bought most of it, including the mask, on Etsy, though some of it she already had at home.

The plague doctor ensemble dates back to 17th-century Europe when physicians wore the mask filled with perfume in a mistaken belief the fumes would protect them.

Since October, Wood has worn her full plague outfit twice. 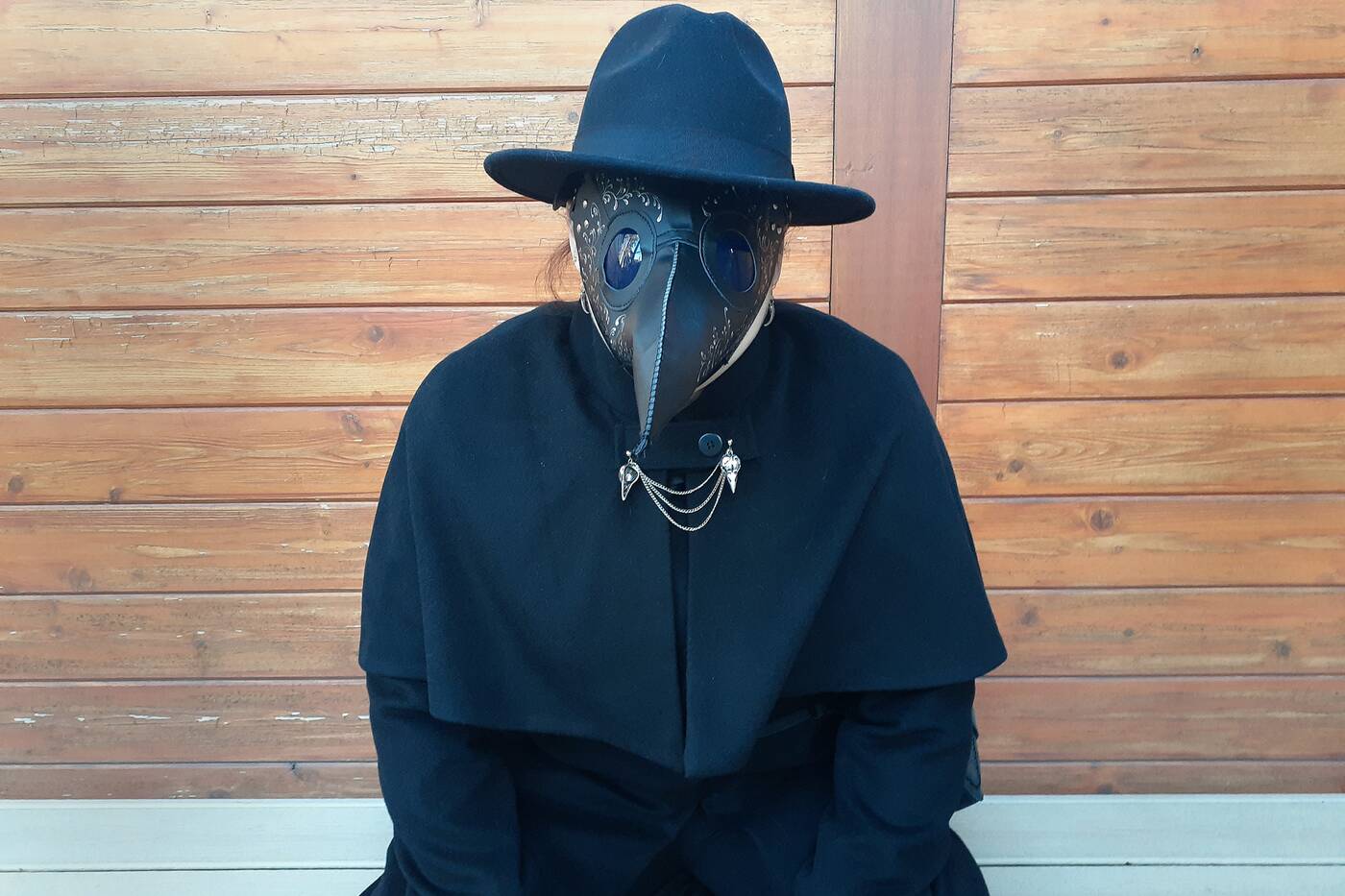 "What with quarantine in effect coupled with the fact I work from home, I don't normally leave my house except to buy groceries, and you don't always want to put on a full, fancy ensemble when you're going to the corner store for milk," she said.

On those outings, people have made comments. One couple asked to have a photo with her, and another person gave her the thumb-ups from his car.

"But, surprisingly, I've found that a lot of people seem to purposefully ignore me. I expected to come across a few double-takes or some passing comments, but the ensemble seems to intimidate and unnerve people enough that they will adamantly go silent and not make eye-contact with me as I walk past," she said.

"Even if I give them a nod or a friendly hat-tip, they seem really put-off and just kind of hurry past," she said.

But Wood is actually trying to scare people. While at first she thought it might just be funny to wear the plague doctor outfit, now her reasons for wearing it are much more serious.

"I have witnessed again and again people who are not taking this situation seriously," she said. "They're walking around without masks, they're not following social distancing rules, they're getting in fights with storefront doormen who are just trying to follow the customer-limit laws put in place to try and keep us safe, etc." 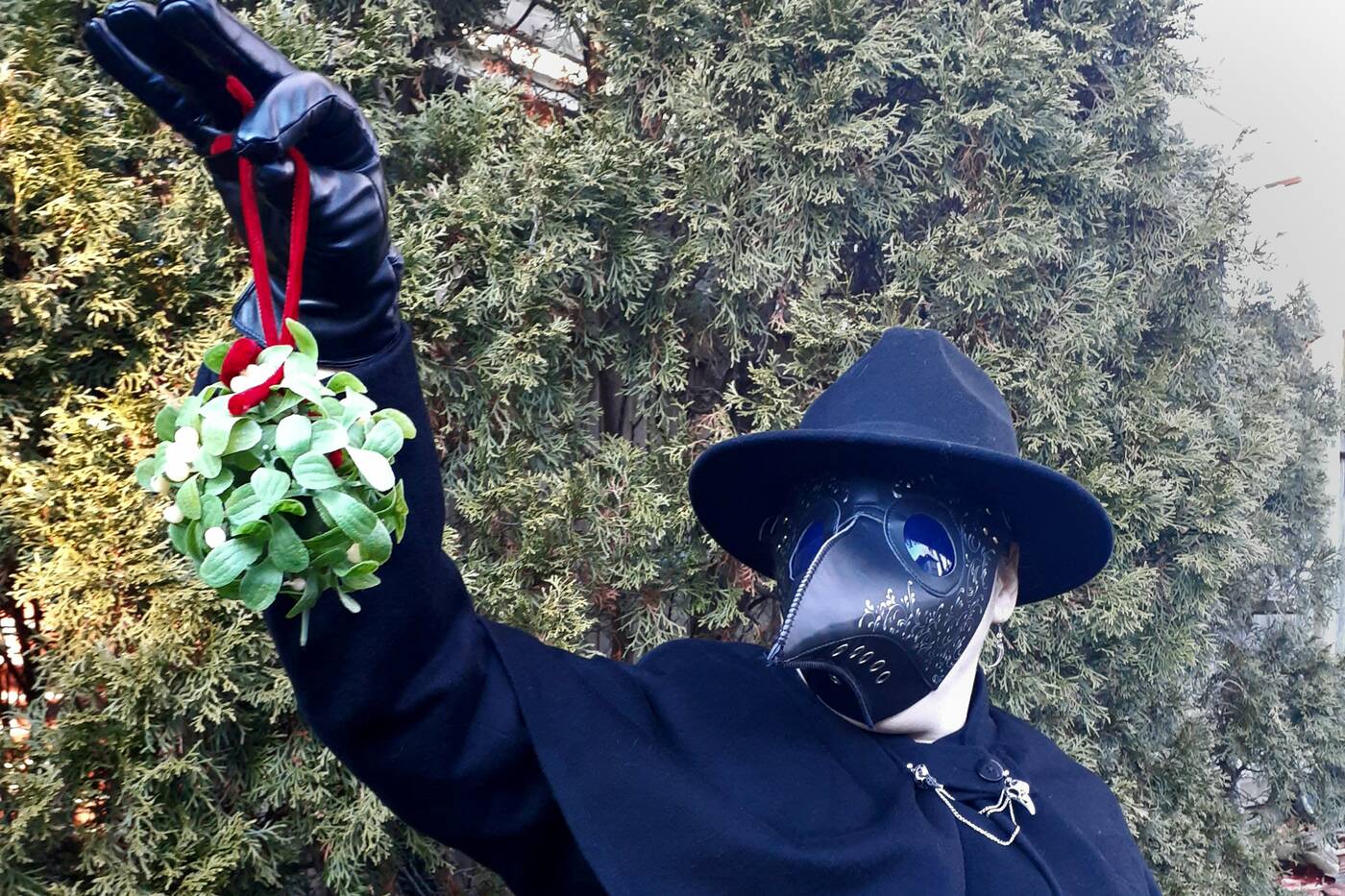 Although the mask was for fun at first, Heather Wood has more serious reasons for wearing it now. Photo via Heather Wood

"I have people who I care very deeply for in my life who are at a high risk for contracting COVID, and to see others walking around blatantly disregarding, or actively fighting against safety restrictions, makes me very upset."

While there have been medical advancements since the 17th century plague and the 1918 pandemic, there is still reason to be concerned. The plague doctor is her way of reminding people to take precautions.

"If I unnerve people because of it, then that's probably a good thing. Everyone needs to be a little afraid right now; that's what's going to keep them cautious and from making stupid mistakes that will just end up creating an even worse situation."