The Toronto Eaton Centre is open again for in-store shopping, and the downtown mall is now covered in signage and floor markers to help visitors navigate new directional rules.

North America's busiest shopping centre is no longer the bustling tourist destination it was before the pandemic, but those who visited the Eaton Centre on reopening day Wednesday saw a marked difference in how we move around the mall. 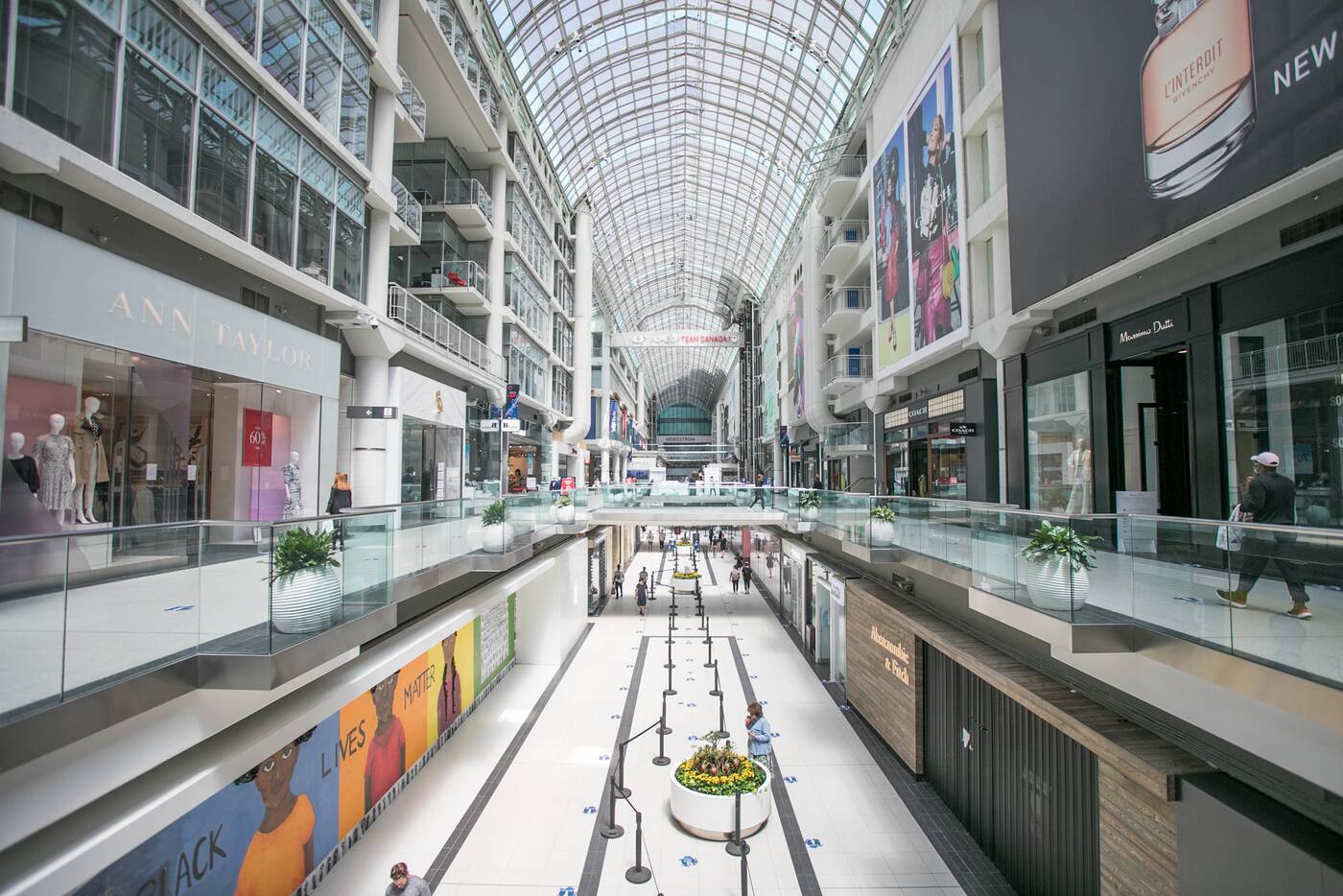 In preparation for Stage 2 of the province's reopening plan, the mall is now equipped with stanchions and floor signs signalling one-way direction of foot traffic. It's also a constant reminder to stay two metres apart from everyone else. 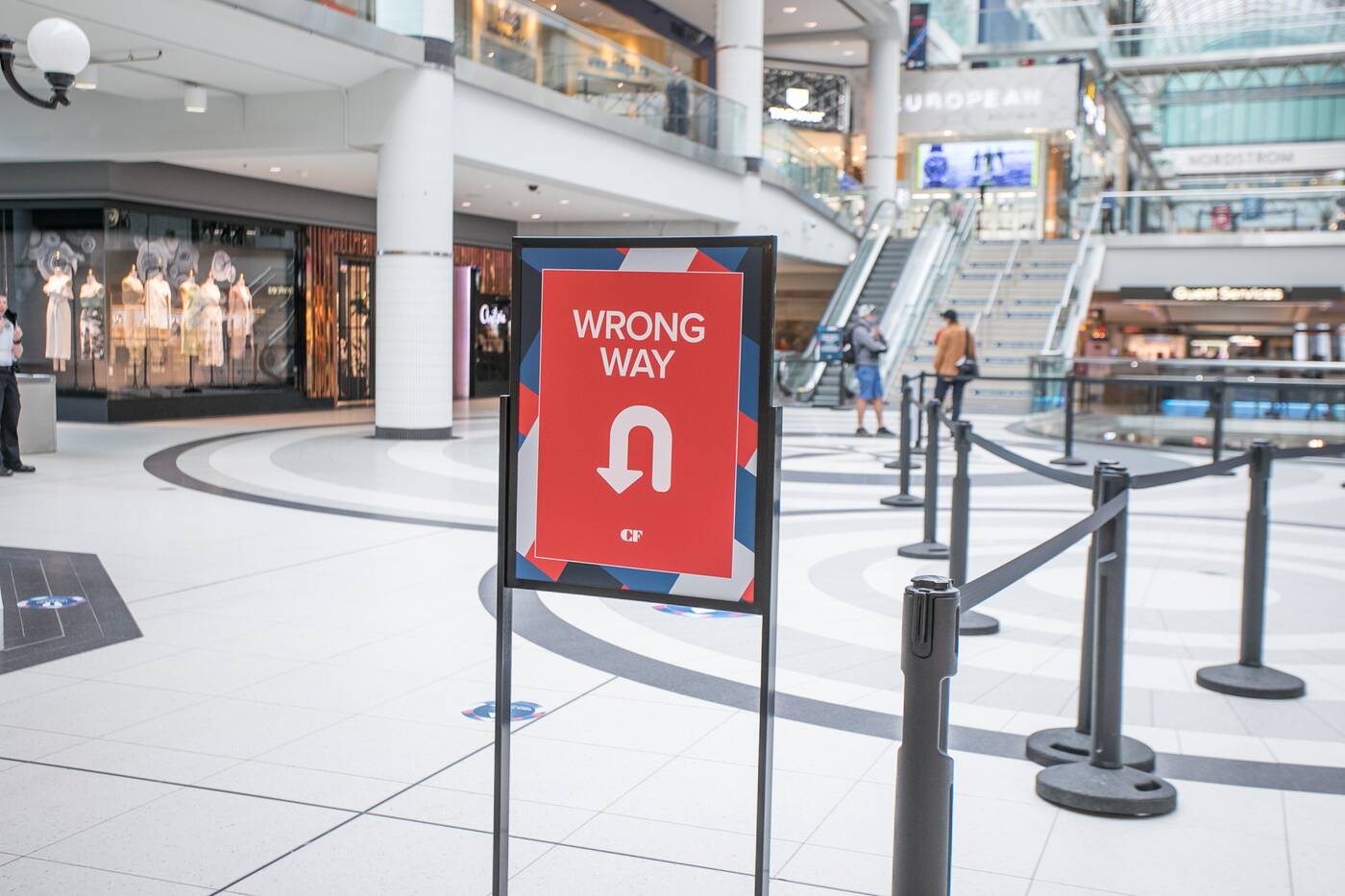 Mall entrances have been divided into "Entry Only" and "Exit Only" doors. The same goes for staircases, with "Up Only" and "Down Only" signs. 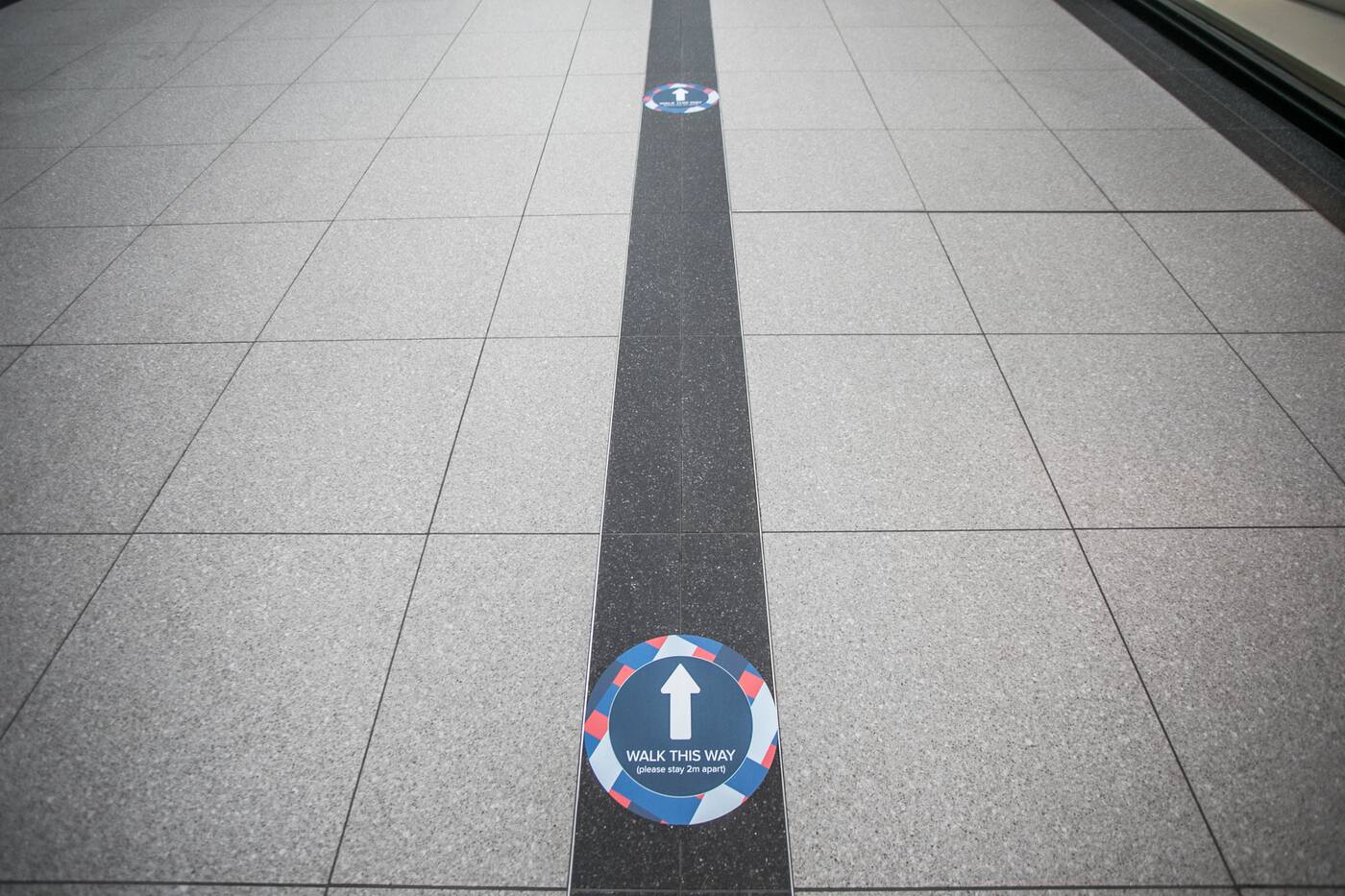 The ants-in-a-line approach has been adopted throughout the majority of the mall's common spaces. 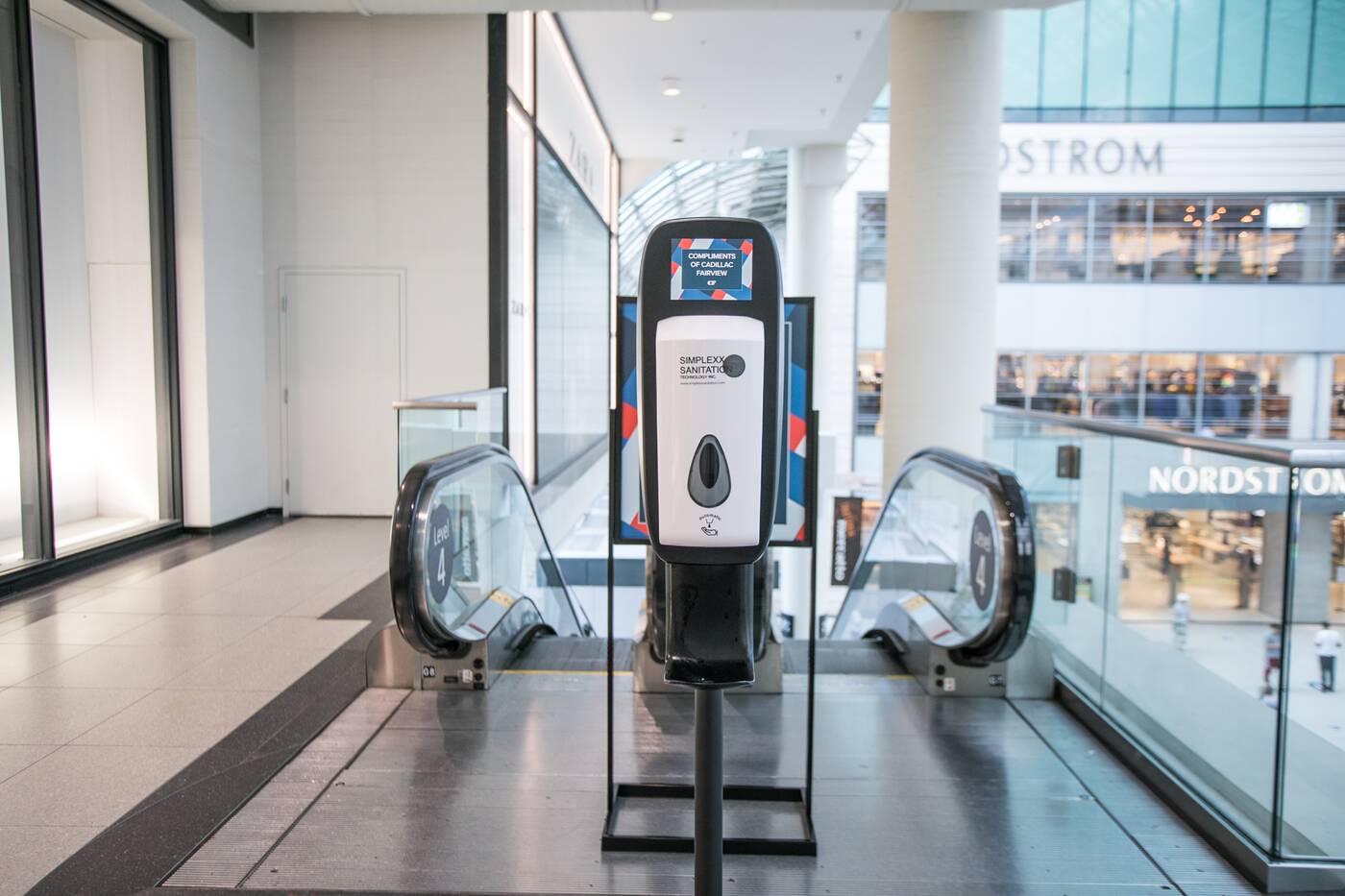 Hand sanitizer dispensers are now stationed around the mall, and according to Eaton Centre management, cleaning procedures have been increased in areas like the food court, washrooms, stairwells, and elevators. 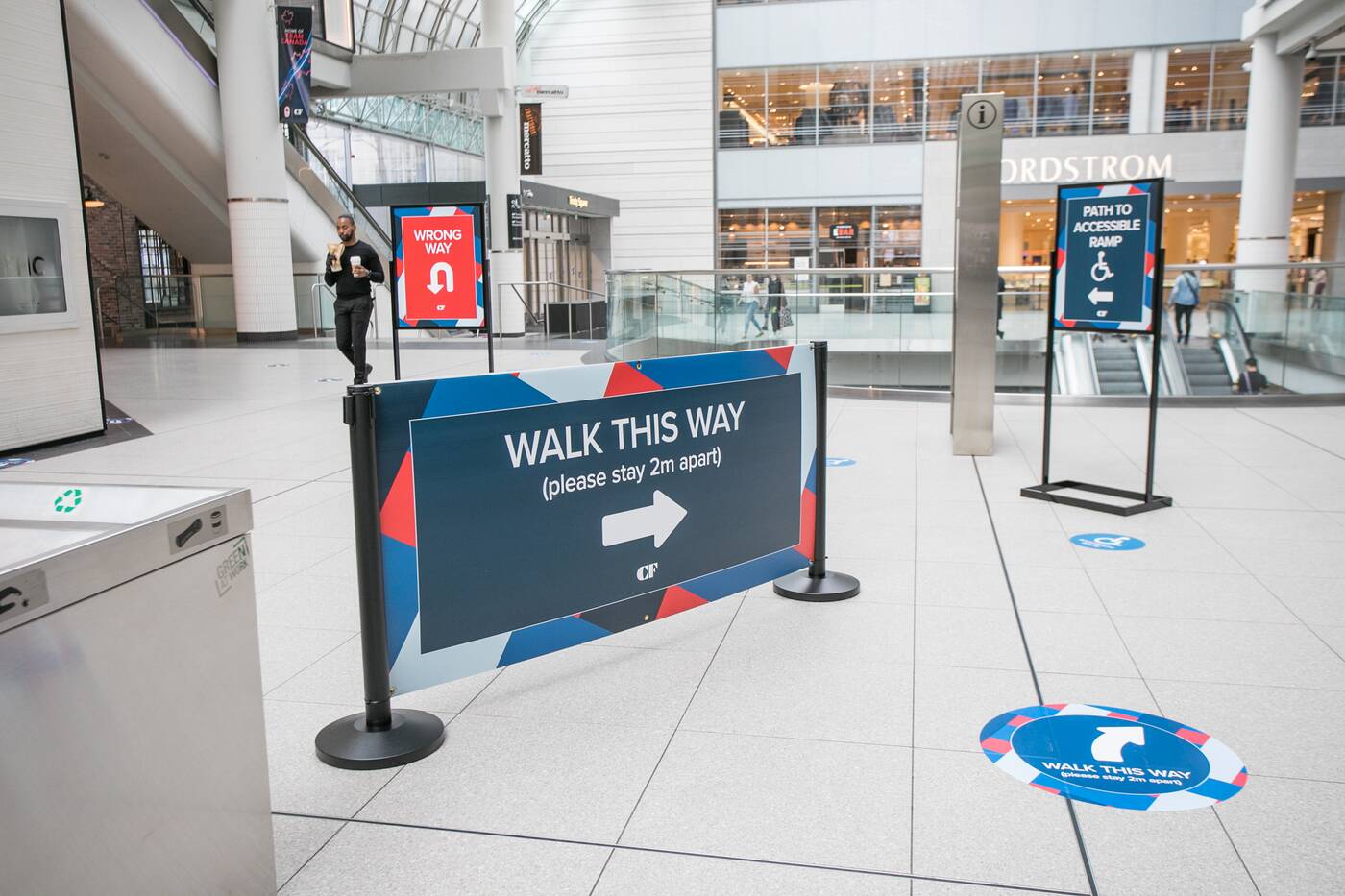 Not all of the mall's stores have reopened for in-store shopping, in fact, the majority of its 235 stores remain closed. 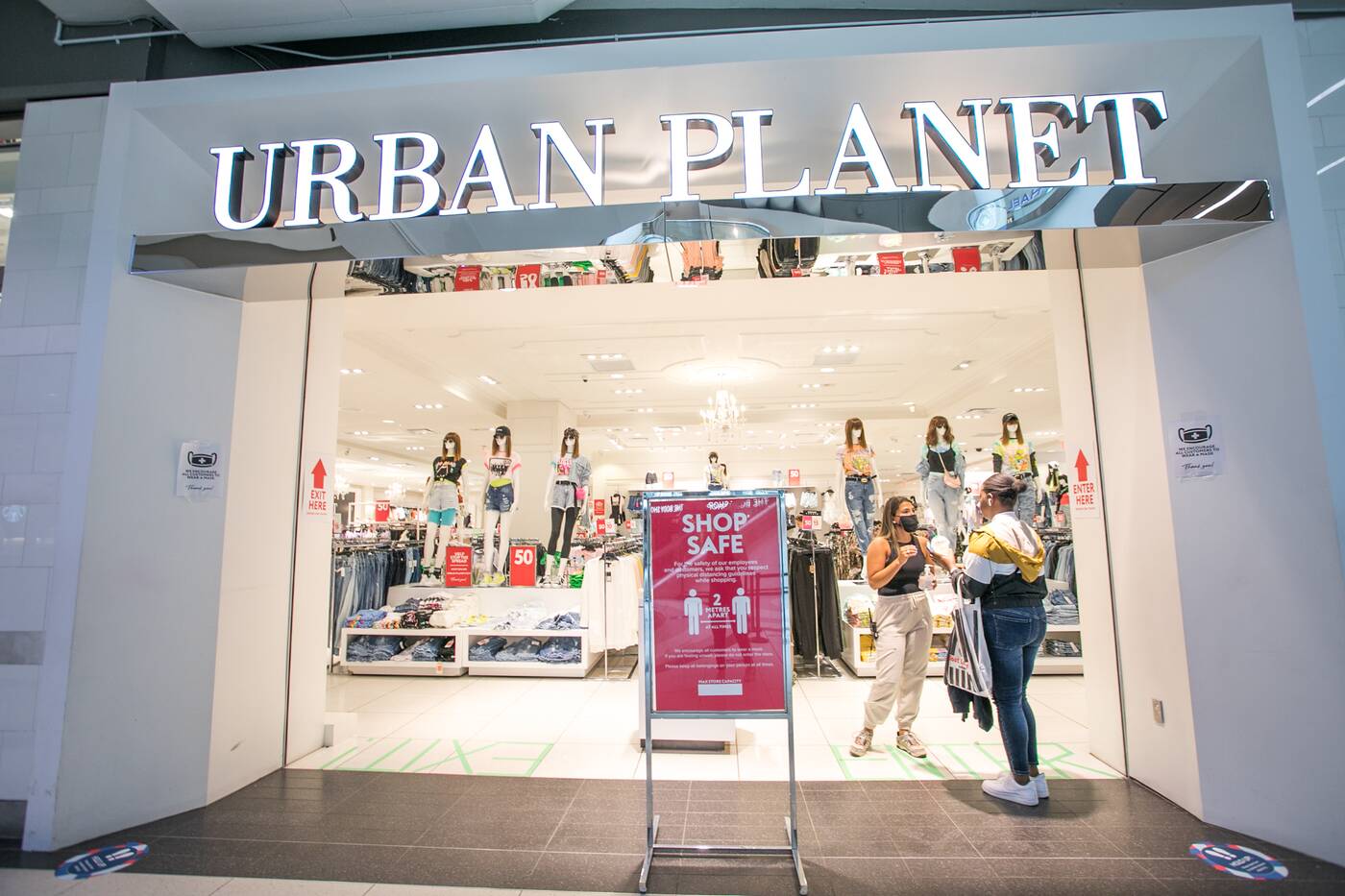 Those that have reopened —more than 50, including H&M, Roots, Sephora, and Lenscrafters — have done so with strict rules as to the maximum number of people allowed in the store at a time, and how they are expected to line up. 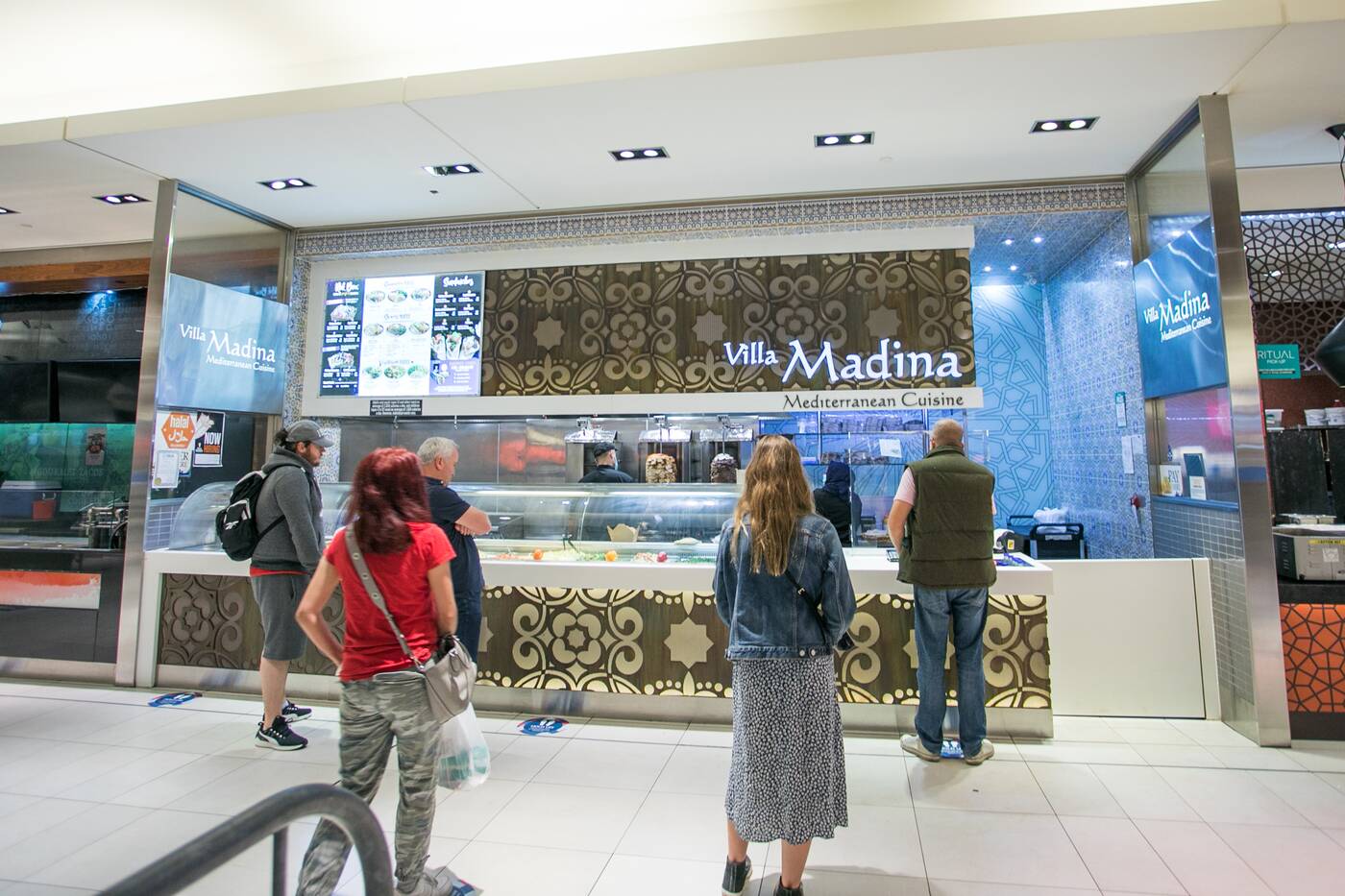 Meanwhile, the downstairs food court still does not permit dining-in, and the two Starbucks operating in the mall are equipped with the usual stanchions to regulate the lines. 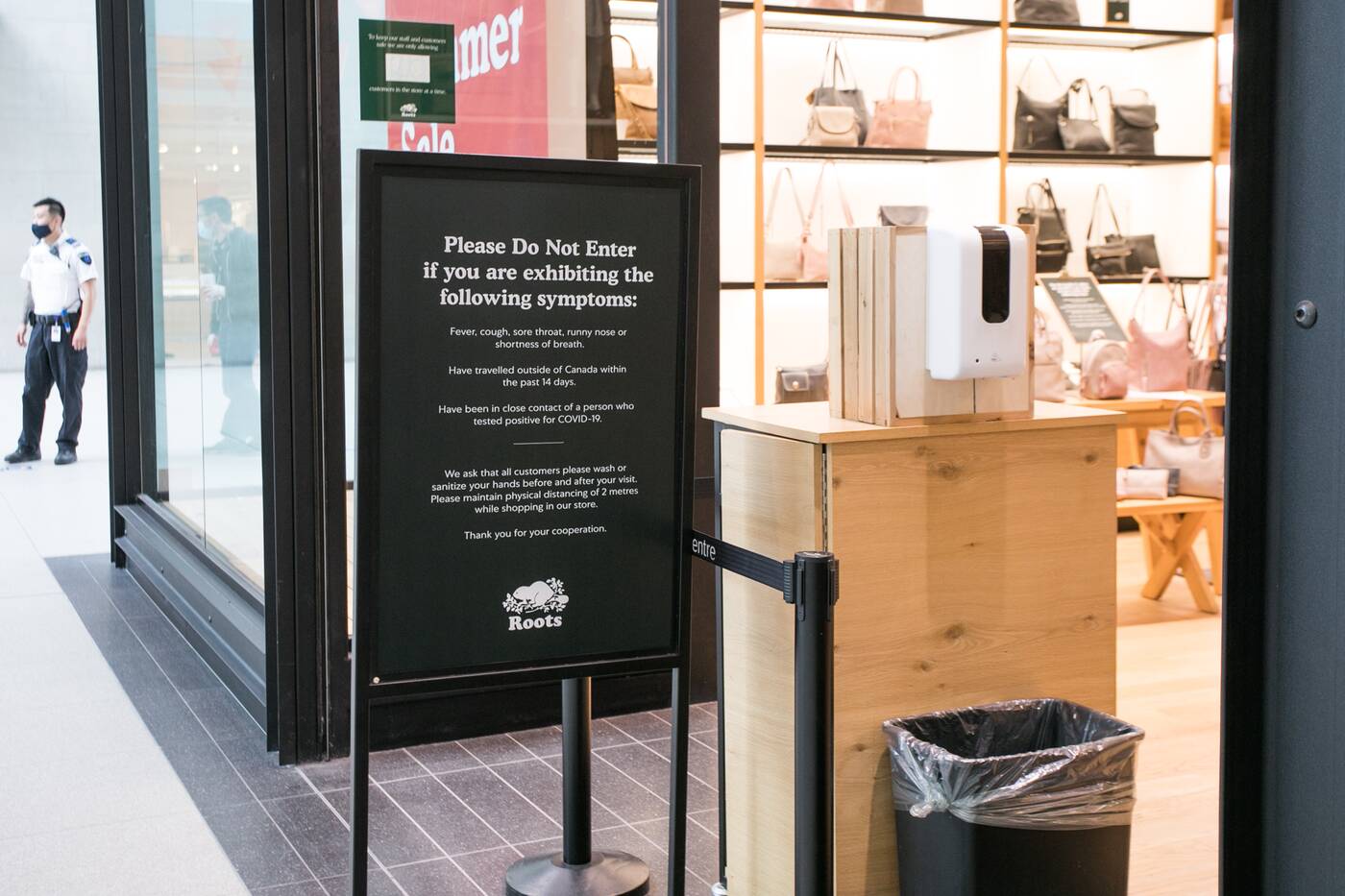 According to the mall management, they've adjusted payment terminals to accept up to $250 for tap payments (anything more than that and you'll have to enter your pin). 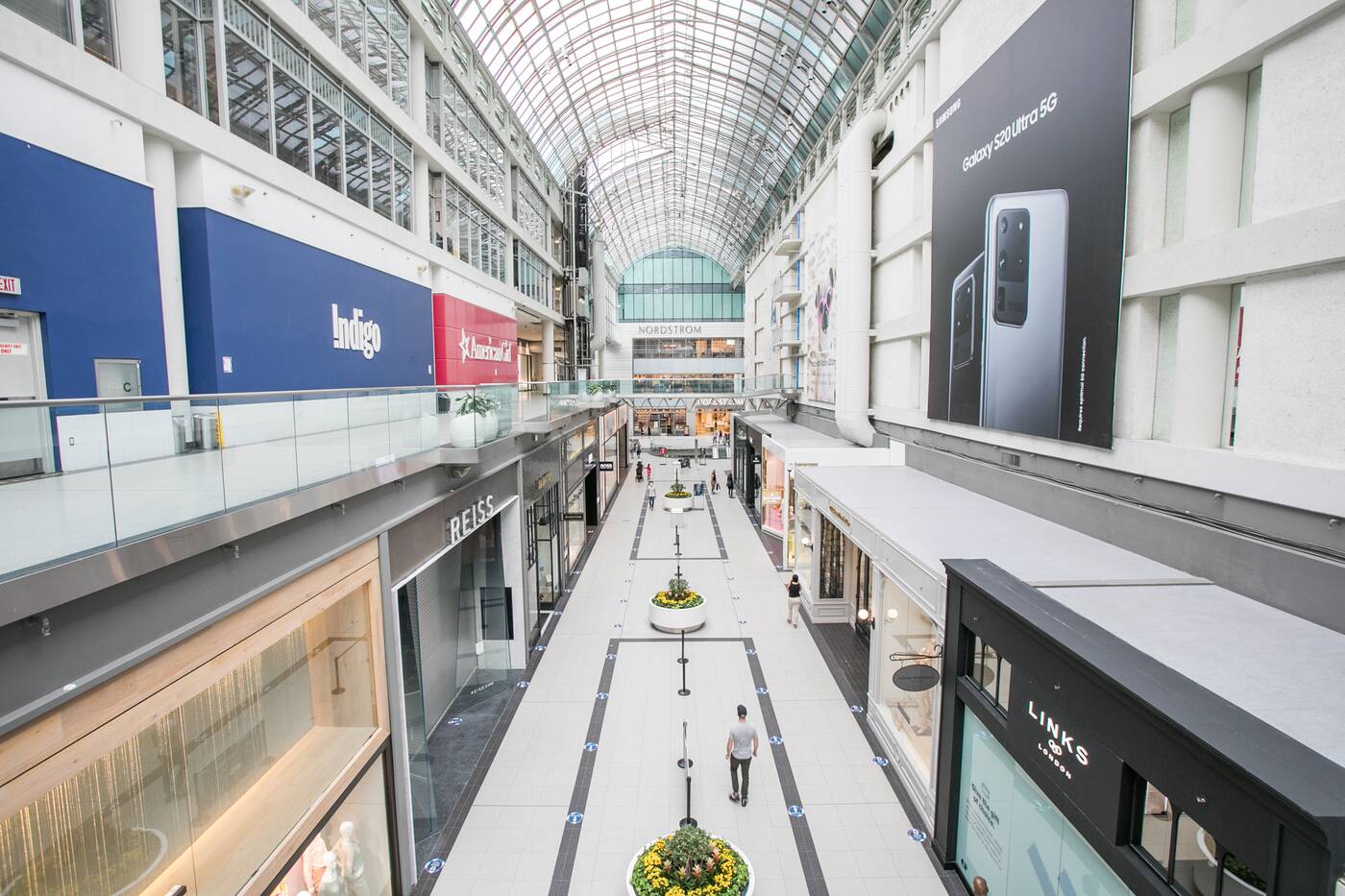 The Eaton Centre is still banning non-essential activities including "mall walking" (meaning no window shopping) and community meetings, with increased security personnel at entrances to help with traffic flow. 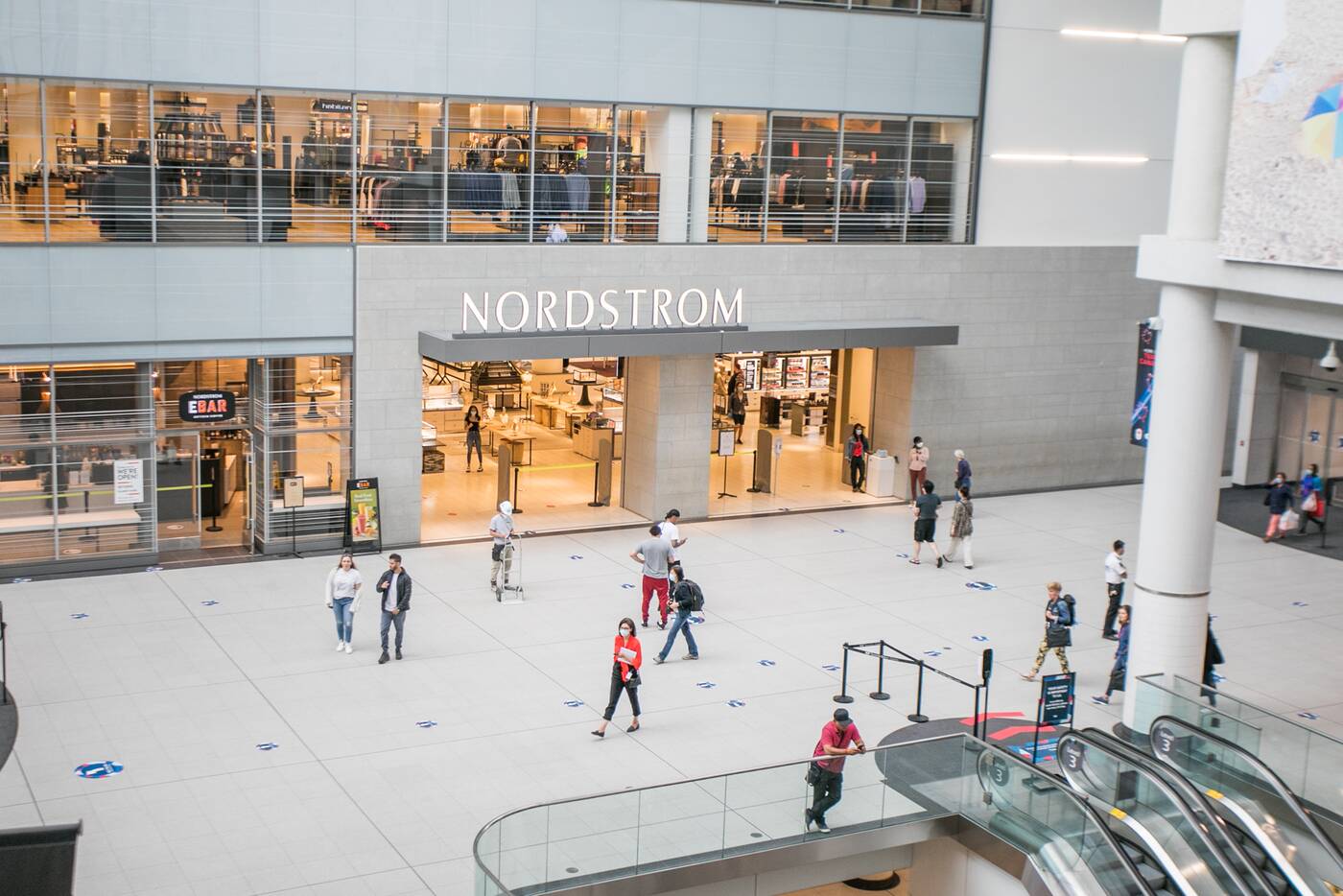 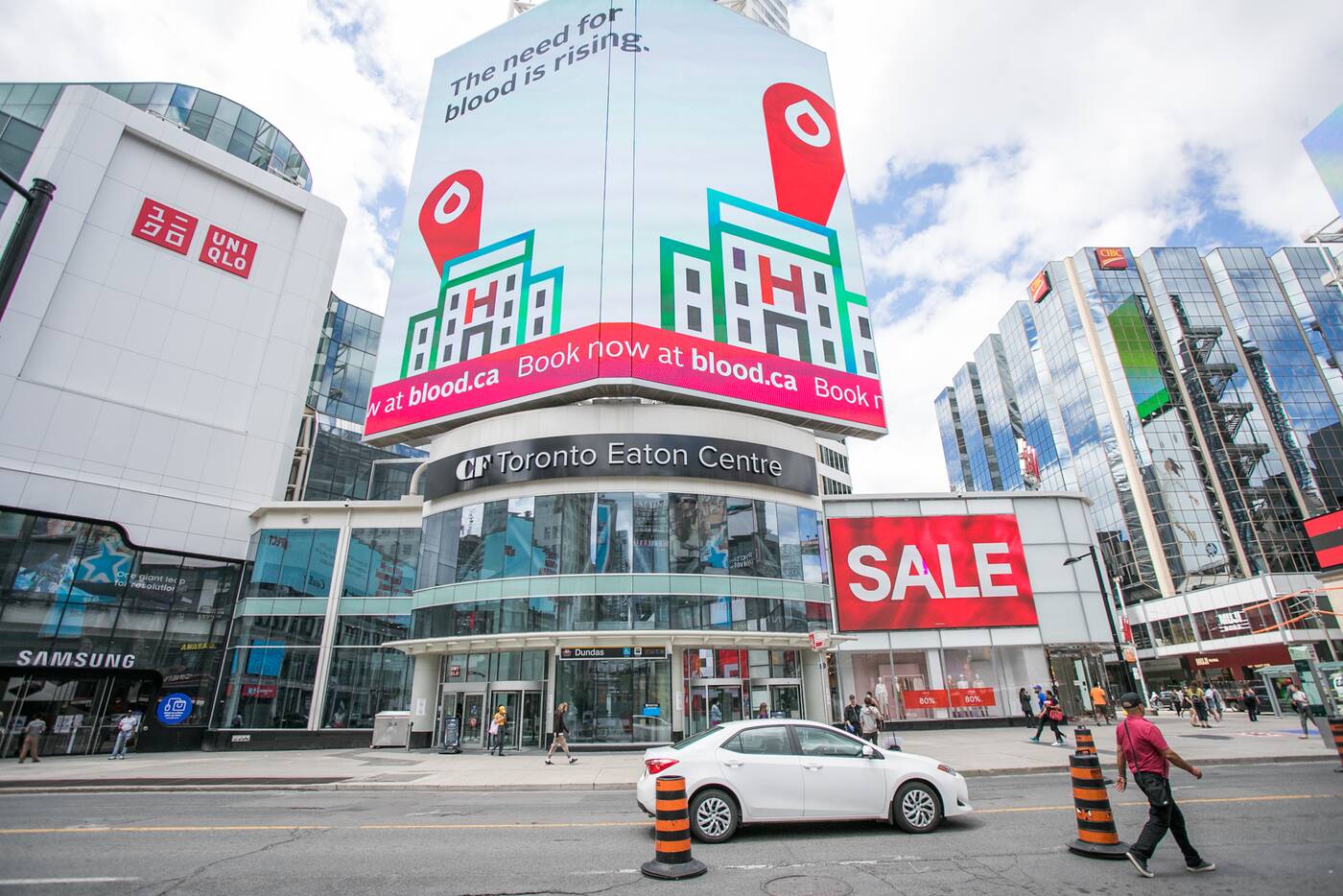