If the 9 to 5 work week wasn't already dragging you down, Monday's sign sale at Honest Ed's probably had you white knuckled at your desk, watching tweet after tweet and Instagram pic after Instagram pic of the huge line of freelancers, artists, shift workers, restaurant industry types, pensioners, and the un(der)employed (plus maybe some braver than you just playing hooky) snaking around the block outside Honest Ed's.

Then something changed. You heard they were waiting in line for three hours, four hours, or more. You thought to yourself, "haha." Sure, the signs are instantly recognizable as pieces of Toronto history and are embedded with the emotions of many an anxious am-I-lost-or-is-that-the-exit shopping trips or summertime strolls through the Annex, but who in their right mind would spend eight hours getting some flimsy sign used to sell sunscreen and soap?

Of course, you now know you were too hasty in your judgement, friends: some of those line-standers stand to make a day's wages or more off their loot on Ebay, Kijiji, and Craigslist, while according to David Mirvish, they paid "anywhere from eight cents to $30 for their souvenirs." Signs are popping up online now for anything from about $50 to $600, and before you scoff and ask who's buying, note there are plenty of "signs wanted" adds offering a hundred bucks or so, too. Head, desk. 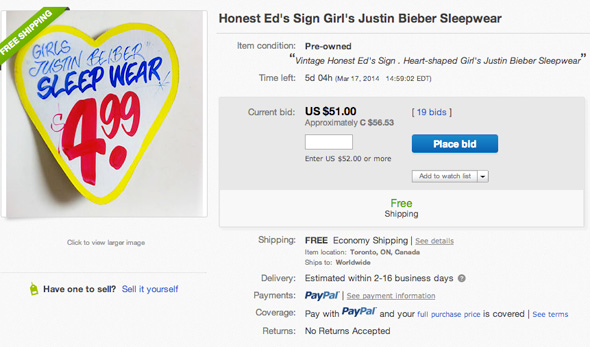 The Canadian combo: Girl's Justin Bieber Sleepwear $4.99
Also the best use of scare quotes going, there's nothing more Canadian than this combo: teen dream Biebz and Honest Ed's. Yet prices for this Justin-branded wear are in US funds, which seems somehow fitting, and at $51 USD (C $56.53) with free shipping it's currently the best deal you'll find on a sign. Bidding is open, so nobody tell the Beliebers. 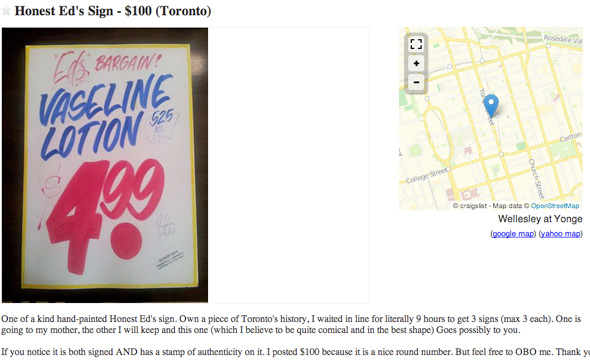 The sex bomb: "Vaseline Lotion 525ml $4.99"
This Craigslist seller claims to have waited in line for nine hours on Monday, so $100 begins to seem fair for this hot little number (which the seller wisely chose not to pass onto their mother). Anyway, a hundred bones is a small price to pay to turn your home into a love palace -- it could work out to a nickel per bone, right? "Wet Ones" might be a nice companion piece. 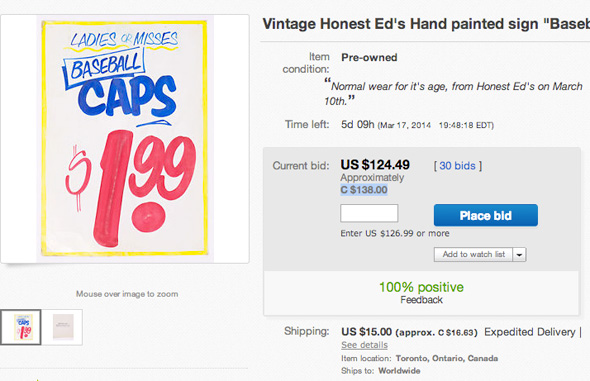 The nostalgia: "Ladies or Misses Baseball Caps $1.99"
Baseball caps for under two bucks, and doesn't this just make you think of Geena Davis, Madonna, and Rosie O'Donnell throwing down on the green fields of yesteryear. Hold on, I think I have something in my eye. Actual baseball caps you can get for C $138.00 on Ebay? These Sochi Olympics Russian baseballs caps, a signed Billy Williams, a fancy Gucci Kids hat, this vintage LA Raiders cap, or a Waterford Crystal St Louis Cardinals World Series 2011 cap - baseball, I never knew you were so weird. 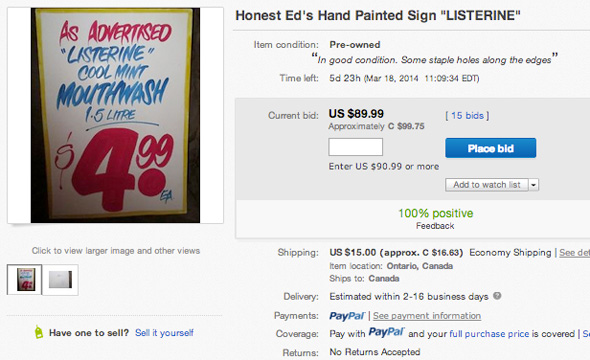 The sketchbag: "As Advertised "Listerine" Cool Mint Mouthwash 1.5 litre $4.99"
Your shabby-chic (honestly just shabby to most) drug den could be a bit peppier, and I'm not talking uppers, unless you're holding. A vintage ad for Listerine will show off your dark, self effacing sense of humour, and the hidden meaning and context of "cool mint" will be a conversation cornerstone for many a sesh to come. The sign's sitting at C $99.75 right now, which is about what you'll get on Church for your mom's TV, plus the seller used Comic Sans so they probably need the money for something illicit. Bonus: Knife Set, because you're living hard. 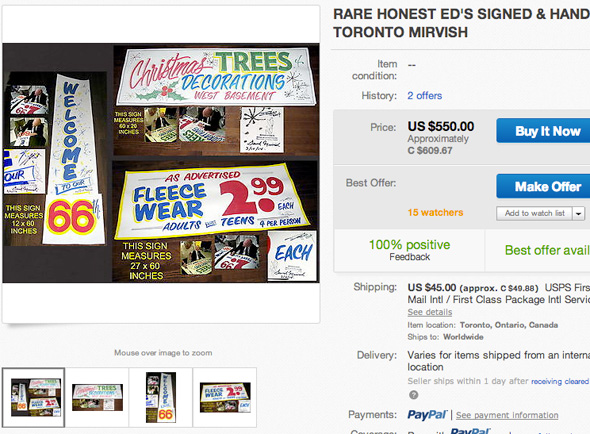 The gouger: "RARE HONEST ED'S SIGNED & HAND PAINTED ORIGINAL OVERSIZED SIGN TORONTO MIRVISH"
The "biggest thing going" on Ebay right now is this auction for three 60 inch long signs: "Welcome," "Fleece Wear," and "Christmas Trees." Smell a deal? Wait -- the winner of the bid only gets to select one sign, with the option to triple their bid for the whole lot of three. As of this writing two bids have bumped the auction up to $609.67, so this isn't just a case of someone dreaming big. There's just something about that bubble font.

Photo by Steven Hoang in the blogTO Flickr pool