Andrew Moore was recently able to quit his day job in favour of bringing a little fashion to the iPhones of this city and beyond. He started Felony Case about a year ago after his friend saw a spiky phone case and decided she wanted one. Moore simply bought a bunch of plain jelly cases and some spikes and made cases for a few of his friends. Through word of mouth, this one-man operation grew into a fully fledged business.

Felony Case is now in boutiques across Canada and the U.S., including Holt's locations across the country. In Toronto, they can be found at all three Holt Renfrew locations, jacflash, The Accessory Bar and Homegrown Boutique. All of the cases are still handmade right here in Toronto.

Moore has sold about 4,000 cases already. "It kind of grew super organically," he tells me over the phone. "Once they started selling, I thought my ultimate goal was to get into Holt Renfrew. I realized I had to set some new goals once that happened." 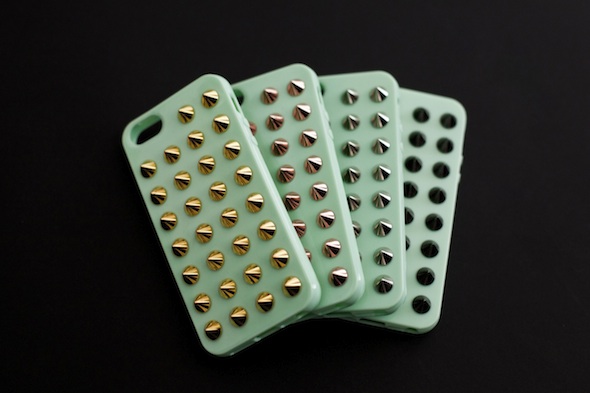 Moore's new goals are mostly related to new designs. He's been working on a collection of leather cases using exotic skins like python, stingray and lambskin. He's also working on a new version of the spiky cases whose design will bring the cost down from $60 to about $40. Those will be ready in September. Moore says he plans to supply "some of the big retailers," but won't divulge just who that might entail at this point.

At the end of the day, Moore is just happy to be providing fashion people with options other than the cheap plastic cases found elsewhere. "You always have your phone, and you have it for so long. But if you slap a new case on it, it feels brand new. I want to make these cases that match with handbags, or match it with the shoes you're wearing." To watch the fabulous cases being born, check out this video by Nigel Powers.

Photos shot by Nigel Powers and courtesy of Felony Case.