The top 10 kicks at the Rise of Sneaker Culture

Out of the Box: The Rise of Sneaker Culture at the Bata Shoe Museum - the first North American exhibition of its kind - initially struck me as one of the strangest exhibitions I've ever encountered. The sneaker is so seamlessly integrated into almost everyone's lives that it's a bit odd to see them displayed immaculately behind glass.

But, as I began exploring the 130 some-odd shoes I began to realize the entire culture is more multi-faceted than I thought - the exhibition included everything from the first running shoes (ever) to Louis Vuitton x Kanye West Don's. So, whether you're a sneakerhead, fashion enthusiast, over-zealous gym addict, or an average Joe, there's definitely something for you to see.

Here are my picks for the top 10 sneakers featured at Out of the Box: The Rise of Sneaker Culture exhibition at the Bata Shoe Museum. 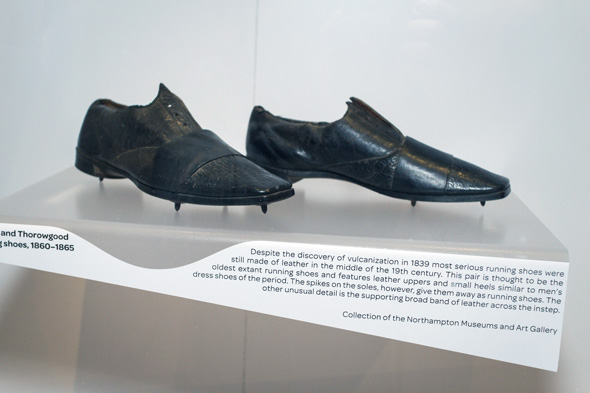 I thought it would be most appropriate to start this list off with the oldest known pair of runners. Though they look a lot like men's leather dress shoes, the spikes and the supportive strap were meant for less formal occasions. 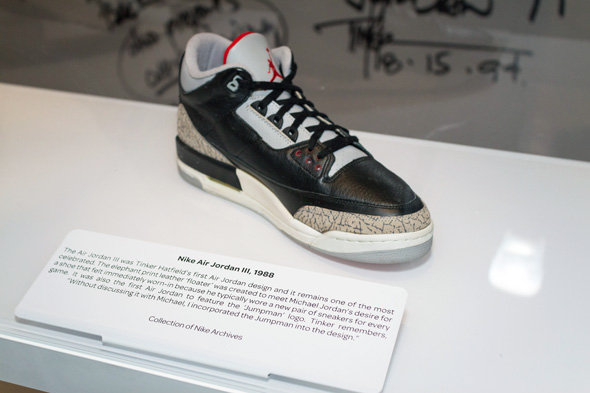 A pair of Nike Air Jordan I's was also on display, but the III's were the first to incorporate the Jumpman logo that we all know and love. The history behind the shoe of not-so-humble beginnings earned it a spot here -- Michael Jordan made them famous by paying a $5000 fine at each game because colourful footwear was prohibited on the courts. 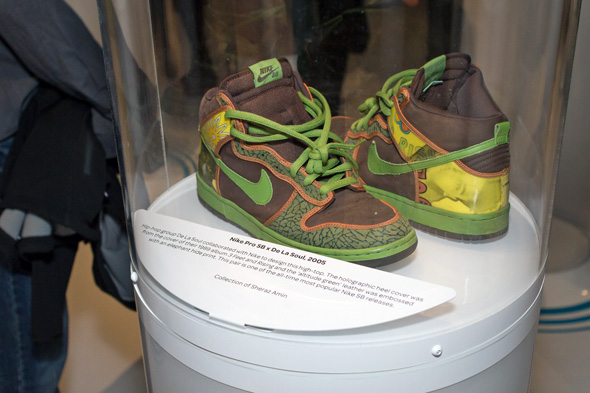 Eight years later, this pair is still one of the most popular Nike SB releases of all time. Designed in collaboration with hip-hop group De La Soul, the high-top sneakers feature a holographic print of their 3 Feet and Rising album cover. 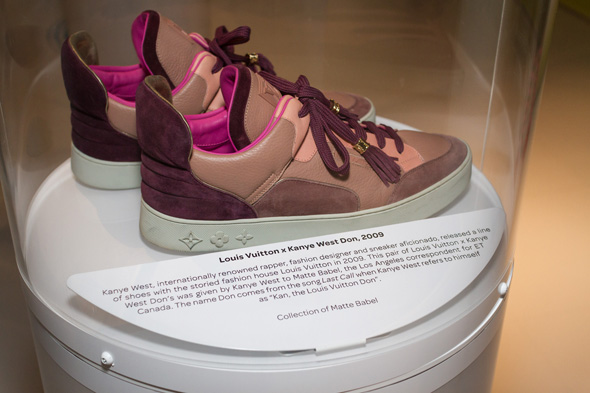 The Louis Vuitton x Kanye West shoe line marked one of Kanye's first forays into fashion design. This particular pair is the most imaginative of the ten styles released in collaboration with the renowned fashion house, featuring an analogous colour scheme in only the highest quality leather. 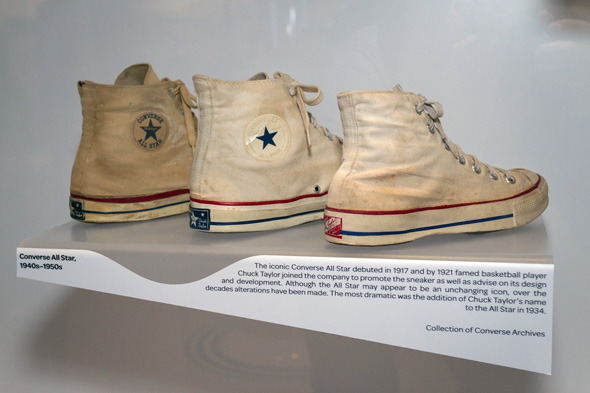 Everybody's got a pair of Converse All Stars somewhere in their closet - it'd be a shame not to pay homage to the history behind the iconic sneaker. These three styles are variations of the basketball shoe between 1940 and 1950, including the different logo placements of basketball player/spokesperson Chuck Taylor. 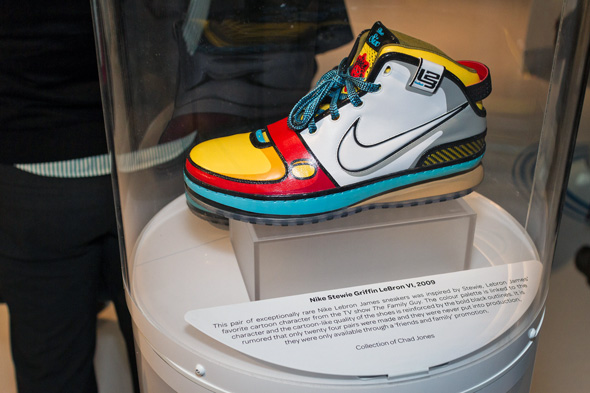 This Nike LeBron VI - inspired by LeBron James' favourite Family Guy character - is amazingly detailed; the bold colours are outlined in black, giving the sneaker a surreal cartoon vibe. Unfortunately, they were never commercially released, making the Bata Shoe Museum one of the only places to see them in the flesh. 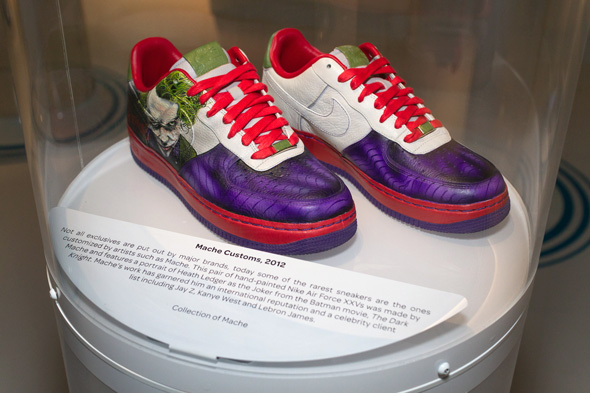 Mache is king of sneaker customization - Jay-Z and Kanye West can vouch for him. This particular pair of Nike Air Force XXV's features a hand-painted portrait of Heath Ledger as the Joker in The Dark Knight. 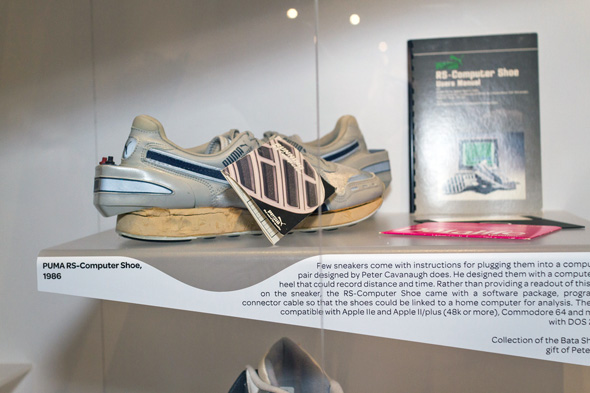 Sneaker technicians have certainly tried it all - these PUMAs are solid proof that athletic shoes will always aim to be (questionably) progressive. This pair - released in 1986 - came with a software package and cable so that they could be linked to a computer to pull up data on running distance and time. 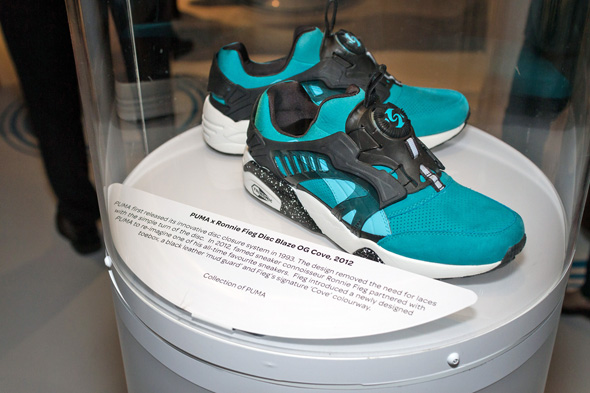 In the 90's, PUMA released footwear with disc closure systems in place of laces; turning the disc would tighten the shoe as needed. Last year, sneaker designer Ronnie Fieg reimagined the classic Disc Blaze, releasing an updated version in collaboration with PUMA. 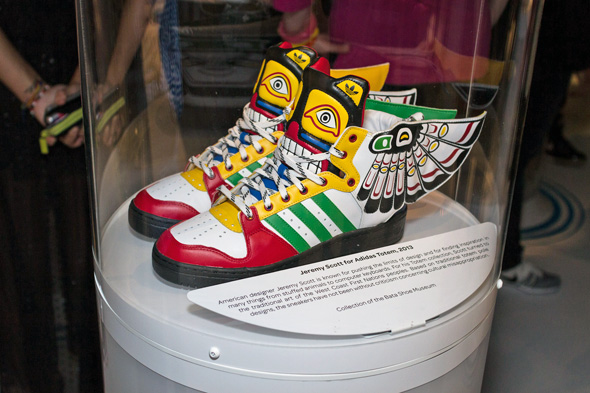 Last but certainly not least: the Jeremy Scott for Adidas JS Wings 2.0 "Totem." When I think of Jeremy Scott's shoes, I automatically think of wings, exaggerated tongues, and in-your-face colours. This pair - as part of his Totem collection of First Nations-inspired pieces - uses all three elements to create a controversial final product.

The Out of the Box: The Rise of Sneaker Culture exhibition at the Bata Shoe Museum will be open until March 30, 2014.