The florists of Avenue and Davenport

There is certainly no shortage of places to get fresh flowers in Toronto, but one of the most concentrated blocks is at Avenue and Davenport, where a quartet of florists operates pretty much side by side. South on Avenue from Davenport, the first one is Kay & Young's, followed by Yang's Flower & Fruit Market, then Jong Young, and lastly, Grower's Flower Market & Gift. I've known the florists to be on the street for years, but little about how they came to settle into their spots, and why, for that matter, they've chosen to operate so close to their competition. 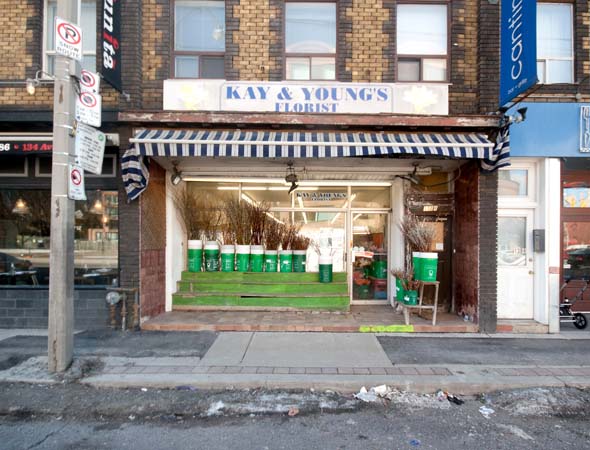 On first glance the florists all seem pretty similar. Many items are priced the same, though Kay is a little busier than Jong, and Yang's is a little greener than Grower's. I found that three of them, though, shared an unwelcome other trait. 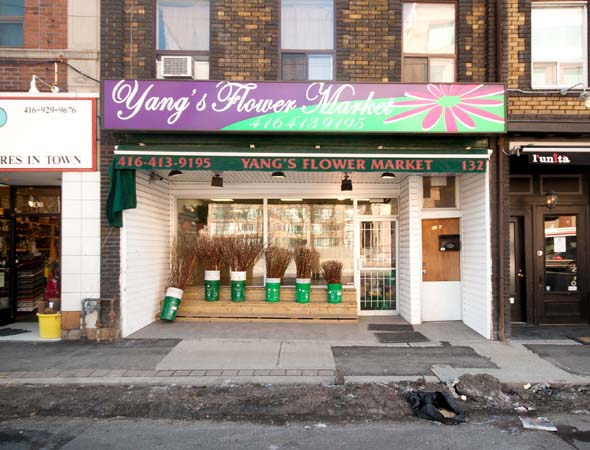 Let me start by saying that I recognize for a business owner, a patron carrying a notebook elicits far less glee than a patron carrying a wad of cash. Still, my notebook seemed to emit an "ignore the miser" message audible only to the staff of the first three shops. Though the women working at Yang's did concede to making eye contact as they told me they couldn't answer my questions. "You'll have to wait for the owner," one told me, snipping the ends of roses. "He's not here."

I tried fishing for an approximate time, leaving my name and number, and dropping in at random, but never did catch the owner. 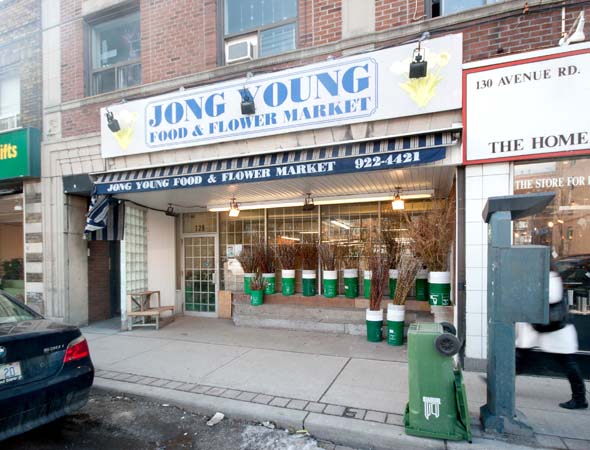 Then there was Jong Young, which is actually under the same ownership as Kay & Young's. Said owner is usually at Jong Young, though, bouncing back and forth between the cash and the back room, sometimes talking breathlessly on the phone. Here, eye contact was more of a commodity.

So I put on my best, 'Sure, go ahead and call me ma'am' smile and said, "No problem! When would you prefer I come back? Or should I give you a call? Email?"

That's when she'd tell me to come back on another day, when she might be freer but never was.

So, when I got to the fourth store and asked the owner about what made her different from her three neighbours, I totally believed her when she replied, "Service." 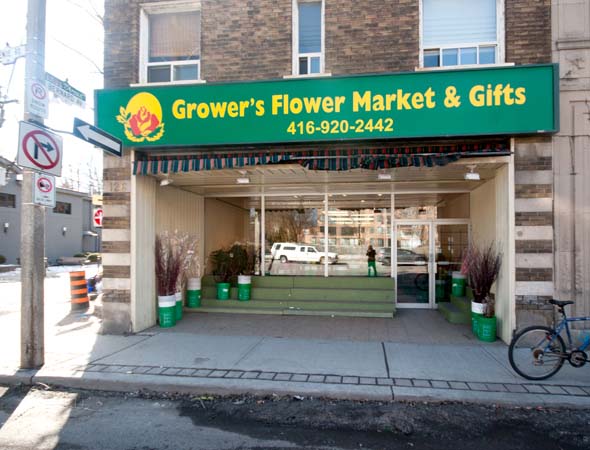 Truthfully, I didn't catch her the first time I walked into Grower's, but one of the staff told me she would be in after six. And she was. I checked in with her briefly, letting her know who I was and what I wanted, and then stepped back as she attended to a few customers before coming to answer my questions.

"I'd say service, definitely. That's one thing we offer that they don't do as well. We'll help you develop your ideas, and we're not shy about giving tips." 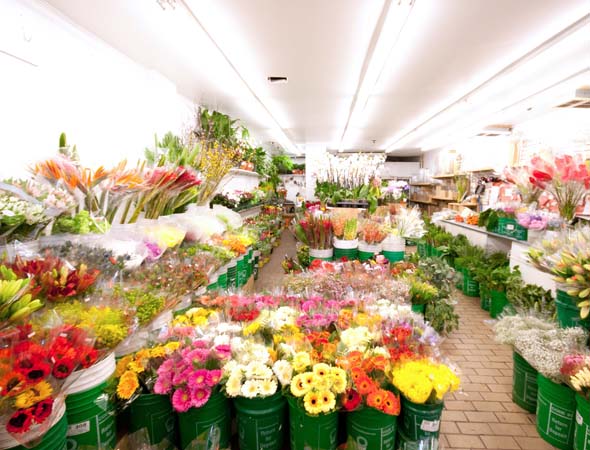 The owner is Milenah Eglite, who recently took over the store from her in-laws who had run Grower's for eight years.

"I don't know exactly how we got four stores on one block," she replied when I asked about the street, "but I do know that this one came last."

According to Eglite, the other two owners on the street are connected through some sort of familial relation, though they are not on speaking terms.

"Everyone here is a little bit territorial," she added. "They don't like it when you go in there and see what they have." 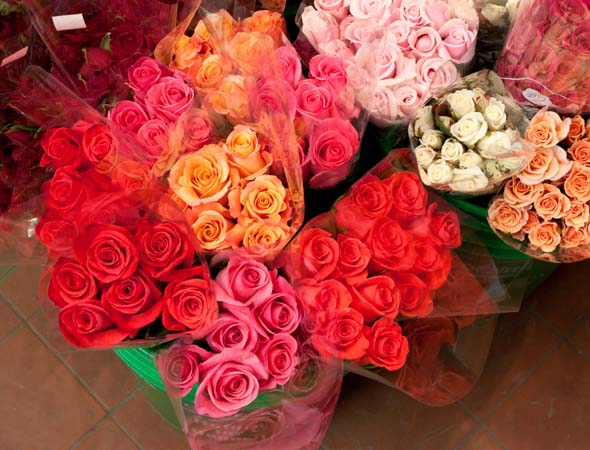 Despite the apparent tension, Eglite said she's quite happy with her spot, despite the direct competition. "It's a great area; we're so close to downtown without being right in the middle of everything. Plus, we're very different from the other three. Here, we do a lot of custom arranging, and we supply hotels and restaurants in the city."

"We also have a some unique plants you won't find many places," she said, leading me to the back of the store with mirrored shelves she calls "Designer's Corner." "Right now, I'm finding new growers, especially for orchids," she says, pointing out her newest set of beautiful cascading orchids ($65). "You won't find that next door." 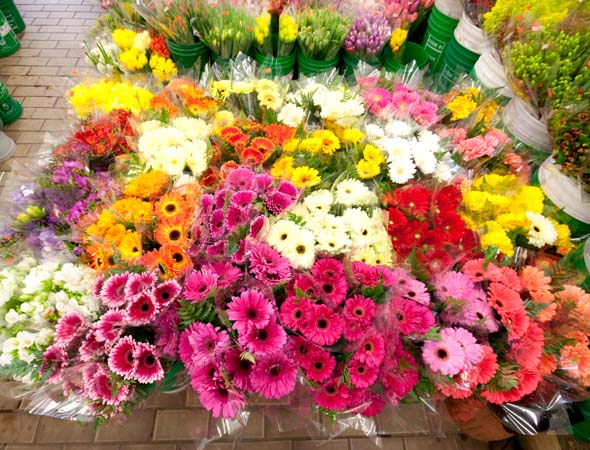 After showing me some of her other orchids, specialty vases and bonsai trees, Eglite seemed perfectly content to watch me walk out flowerless but with a notebook full of notes. While I may not have learned how four separate shops can maintain their livelihoods on such a saturated street, I did come to realize how one can certainly stand out from the crowd. 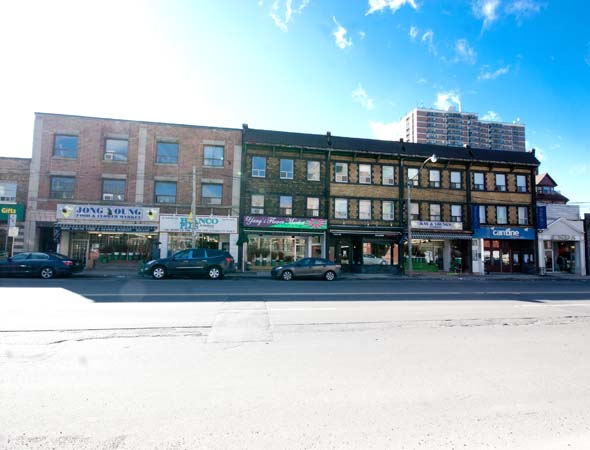